We have just advised in our Live Telegram Channel to slightly lighten up on the whole portfolio exposure. Why? Isn’t the common saying:”Cut your looses short and let your winners run”? Indeed! Still, one has to take profits at some some time. Taking a small portion of the table provides for some extra cash. It make you feel like a winner and as such supports confidence, one of the main psychological ingredients as a trader/investor to continuously act in ones own best interest. Even more so it allows for keeping some powder dry, having that extra cash to act upon the next opportunity.

In our publication 2 weeks ago we made the point, that we do not see a high likelihood of a larger retracement of the Bitcoin market. That was an understatement with the market having advanced quite a bit since.

Last week´s chartbook illustrated the remaining potential for the market in the short to medium term future.

Since historically, the last quarter of the year is the strongest growth period in the crypto markets and we had quite a substantial move already, the likelihood for whats called a “summer hole” (a decline of volume and participation in the markets due vacation time, causing price levels to go sideways or moderately decline) in traders jargon (summer doldrums), has certainly some higher probability.

Investors are happy right now as their longer term bets have worked out. “Hodlers” wear a smile  after a long time of pain holding on to their positions through 2018’s steady declines and quite a few months of sideways action of uncertainty. Finally they see some green. Traders had amicable environments of directional and volatile markets…

Isn’t it time to at least take some partial profits? 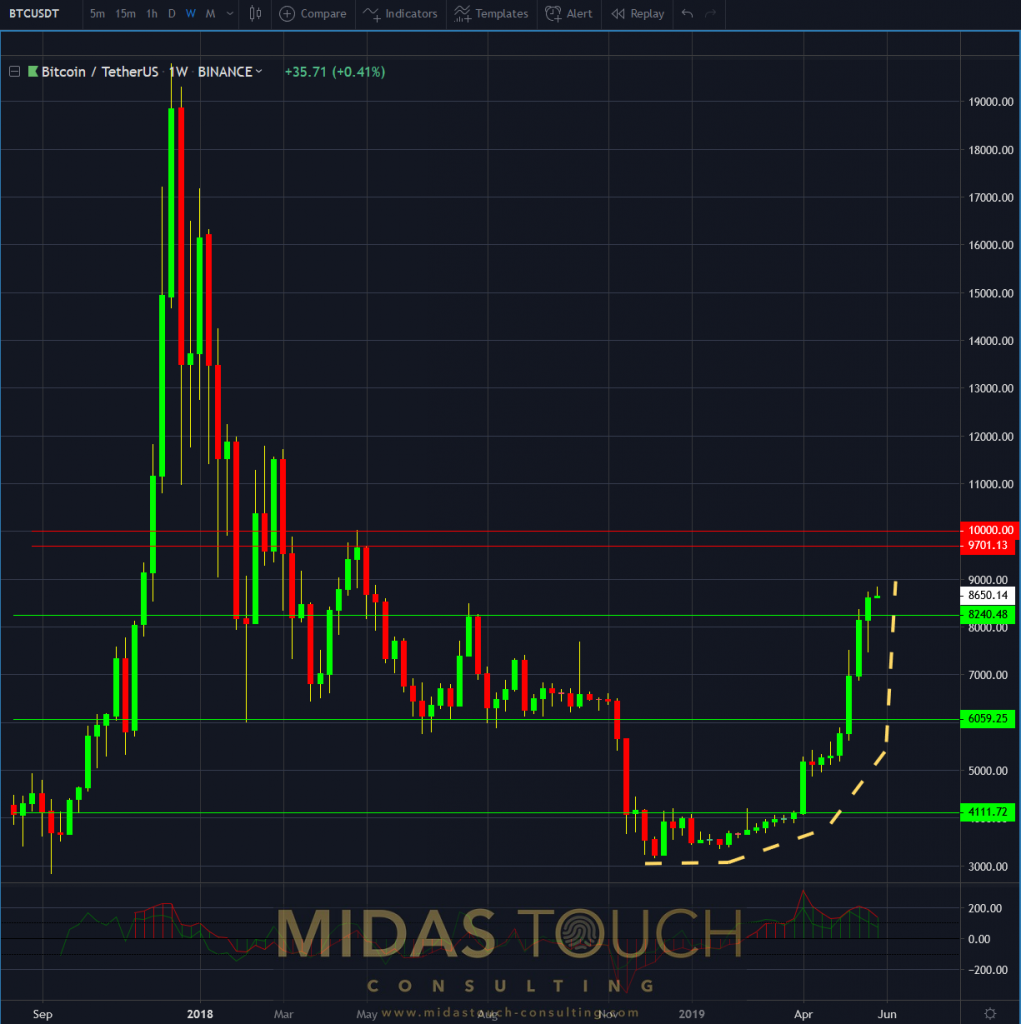 The weekly chart above shows clearly, how price advances got steeper and steeper, often an indication that a pause is imminent. And a pause is your money sitting at risk, exposure time is always a possible threat to your holdings. So we are not necessarily saying that there is a large retracement in sight, but you should always ask yourself, how much risk for how much more gain.

Greed never pays! Yes prices could go to $10000, could even move away from you and go much higher. Again, how much risk are you willing to take for exploring this option. Isn’t it a lot easier to give more leeway to the remaining position exposed to the market in regards to stop levels once you have taken a small portion of profits. And isn’t just that psychological aspect so important to sustain larger positions and longer time frames? 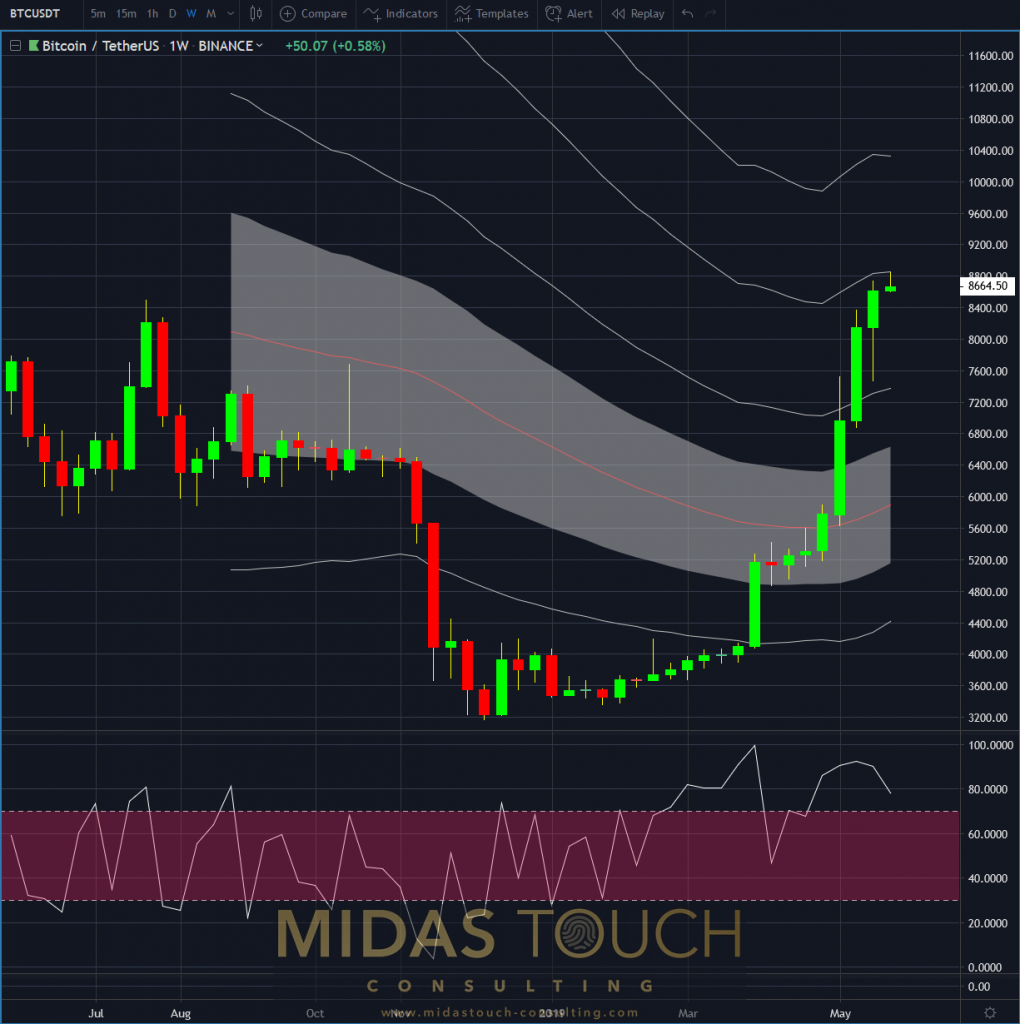 This weekly chart with its standard deviation channels represents a probability of price deviation from the mean (the thin red line represents the mean itself). Even so, for a volatile market not uncommon to be able to extend their reach, mathematical probabilities are at least one edge to consider. A likelihood of just such a resistance here being built by a principle law of nature is at least worth mentioning (in this case prices have moved away from the mean to such an extent that a likelihood of a turning point is increased).

We are not to say this is the only way to Rome, since there are many. But instead of being greedy our conservative approach has found a multitude of advantages in taking partial profits at a time. 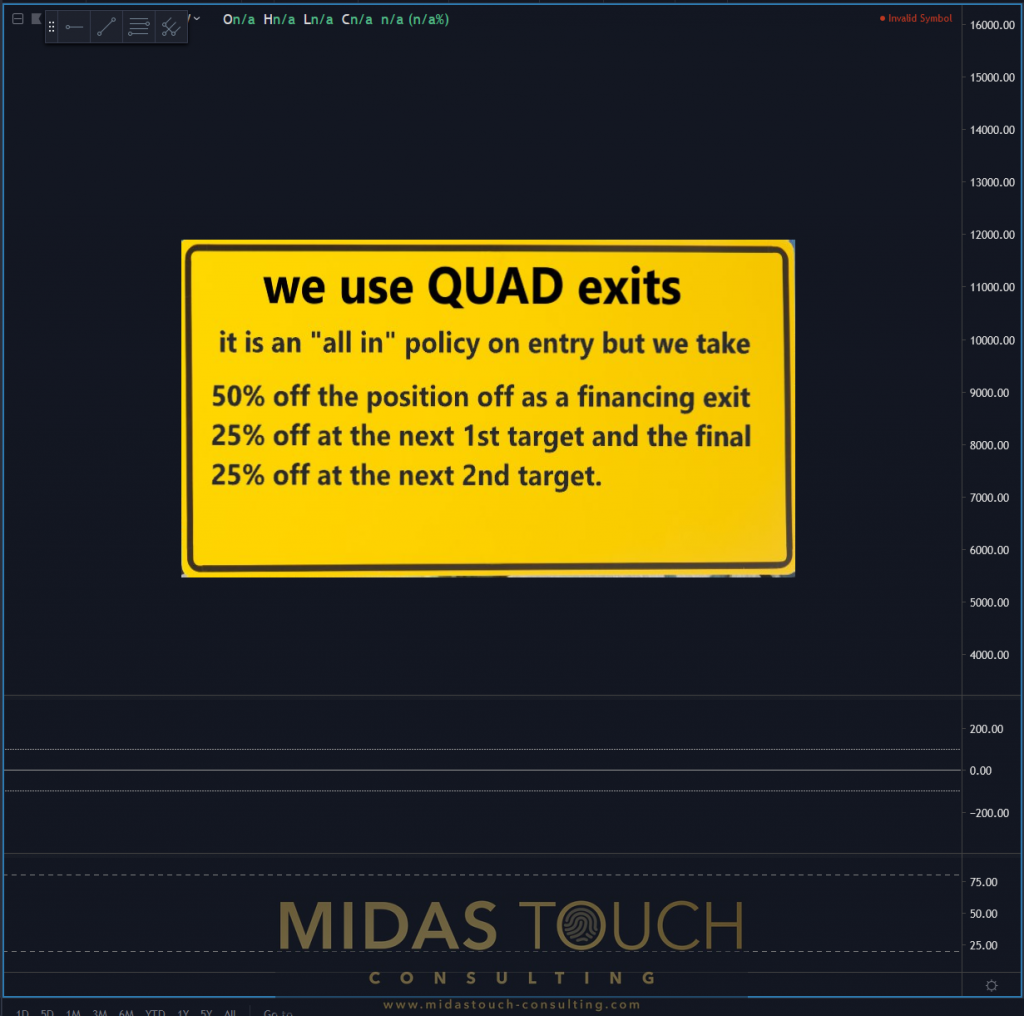 The percentages may vary depending on market conditions and your trading style, meaning how much you want to cash in. The general idea of pairing out we find worthwhile illustrating since the approach of keeping some powder dry allows you not just to feel good (something rarely in alignment with principles of market participation) but to be ready to act, when the next opportunity unfolds before your eyes.