The average investor fears Bitcoin. He is accustomed to having someone else manage his/her money. Usually this is done by a wealth manager whose strategy is to take his money quickly and reign in an immediate commission. They typically unload in ETFs or mutual funds without considering entry or exit timing. This same investor is used to index funds that move like slow trains and has been conditioned to think that this is the only route, nay the safe one! And can you blame him/her for being fearful when the mainstream media toots its horn against Bitcoin’s potential utility? Bitcoin fear is conditioned.

The fact is, and this is something that no mainstream media pundit would admit, Bitcoin has been the best performing asset class of the last 10 years by far! (and U.S. fiat is till the number one money laundering tool according to the CIA, that just as a true fact versus the concerns about bitcoin being used by criminals).  Over nine years ago, the value of a single Bitcoin was worth a quarter-of-a-cent. At the all time highs of 2017, that same Bitcoin was worth near $20,000 (an 800,000,000% return!). 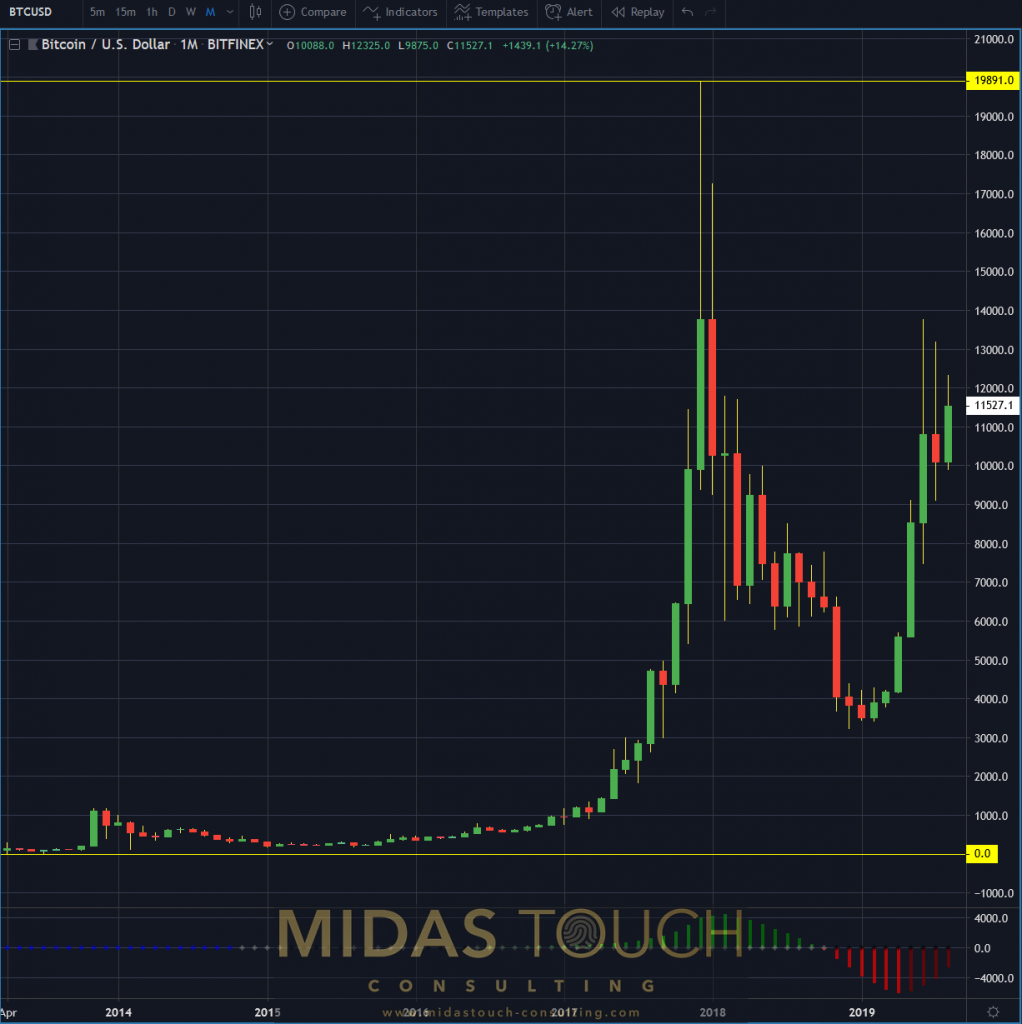 Bitcoin in US dollar, monthly chart as of August 11th 2019

Over the last ten years, the S&P 500 provided an average annual return of 4.895% and mutual funds provided just 4.23%.  After commissions and taxes, even less.

So, where is the investor disconnect? The obvious concern to the average investor is Bitcoin’s extreme volatility. We often hear:  “yes it goes up a lot, but it also goes down a lot.” In reality this is exactly what makes Bitcoin so attractive.

But first, let’s assuage investor fear, which is  based simply on equating volatility with risk. But does volatility imply risk? Of course, but it does not imply true risk, which is the ‘Risk of Ruin’. There have been many allegedly rock-solid firms with very low volatility and thus high Sharpe Ratios that eventually succumbed to a black swan six-sigma event and went completely bust. So, to define true risk is to equate it with the  risk of ruin; volatility in the Bitcoin market then is your friend.

How so? Bitcoin’s  outstanding risk-reward ratios make even a small core position that you could afford to lose return tenfold. Already in 2019, we have had the lows of around US$3,200 rise to around US$14,000. What other asset class with a fixed supply gives these kinds of returns in close to 6 months? We think you know the answer. The point of this writing is not to convince anyone to invest in something they don’t understand, it is simply to remind the astute investor that following price action and sweating volatility is not necessarily removing their risk of ruin.

Rather then, the point of this article is to look underneath the hood of the Bitcoin market to see what makes it tick.

With a max pledge of only 21 million Bitcoins, we have for the first time in human history, a fixed supply for a true store of value. A trend towards efficiency and of a belief in data over a belief in fiat by government decree. A true triumph in open vs. closed system thinking!

The fundamental then to be aware of is what miners call, the “Halving Event.”

Halving implies a predetermined day with the release of more Bitcoins. Currently, there are around 17 million Bitcoins in circulation. The next halving event, which takes place in 279 days from today (08/12/19),   releases the final 4 million for a total and final count of 21 million BTC. (BTC Code: Consensus.nSubsidyHalvingInterval = 210000;) 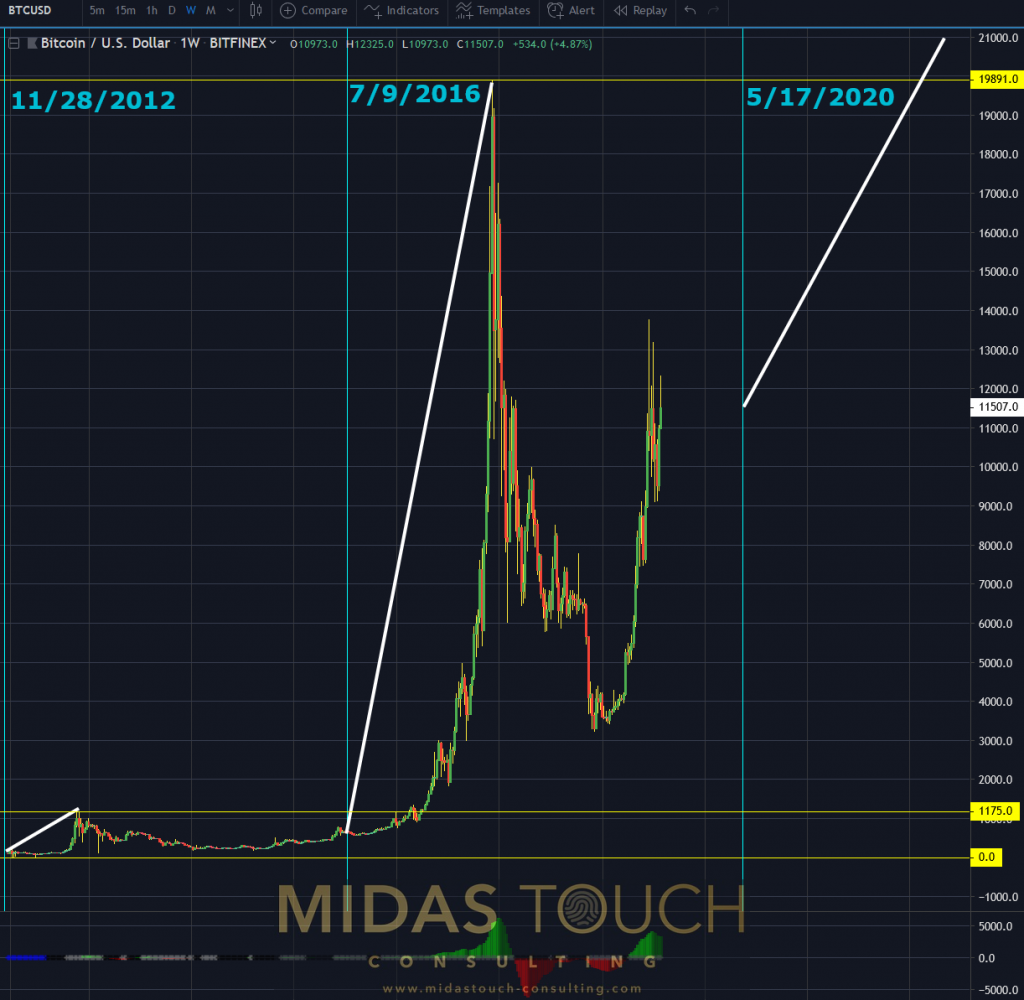 Bitcoin in US dollar, weekly chart as of August 11th 2019

Here is a live countdown to the next halving (less than a year away!): https://bitcoinblockhalf.com/

And while we don’t claim to be remote viewers who can intuit into  the future, we do operate by a basic market principle: that previous market behavior influences future market behavior. And with that principle in mind, preparing oneself prior with a small core position, could be the fundamental catalyst that the astute investor can focus on while ignoring variances in price. (we present many of such principles daily in our Telegram channel!)

Finally, to the investor who recognizes the similarities between the early 90’s beginning internet revolution and the late 2000’s blockchain one, rest assured that as of now, Bitcoin is still the king of digital assets, doubling the entire alt coin market combined. And while 20 years from now Bitcoin may not be the most dominate, just as AOL and Yahoo lost out to Google and Amazon, many astute investors made a fortune on those early internet players due to outstanding risk-reward ratios.