To take advantage of a directional edge the most common methodology is pyramiding. In its purest form, it is added trades to a core position as breakout trades, one counting on the directional edge. The goal here is a “home run” trade that is large in size and can create a huge profit. From a risk perspective this is far from ideal. In principle the steeper the move the likelier the pyramid breakouts work out. These steeper moves occurring most often late in the trend, that is where also the to be expected retracement is the largest. That is equaling highest risk. Therefore, one can often hold the bag by having a huge position going against oneself. However, a more elegant approach would be Reload me.

We recently shared two trades in our telegram channel that are relevant to this approach : 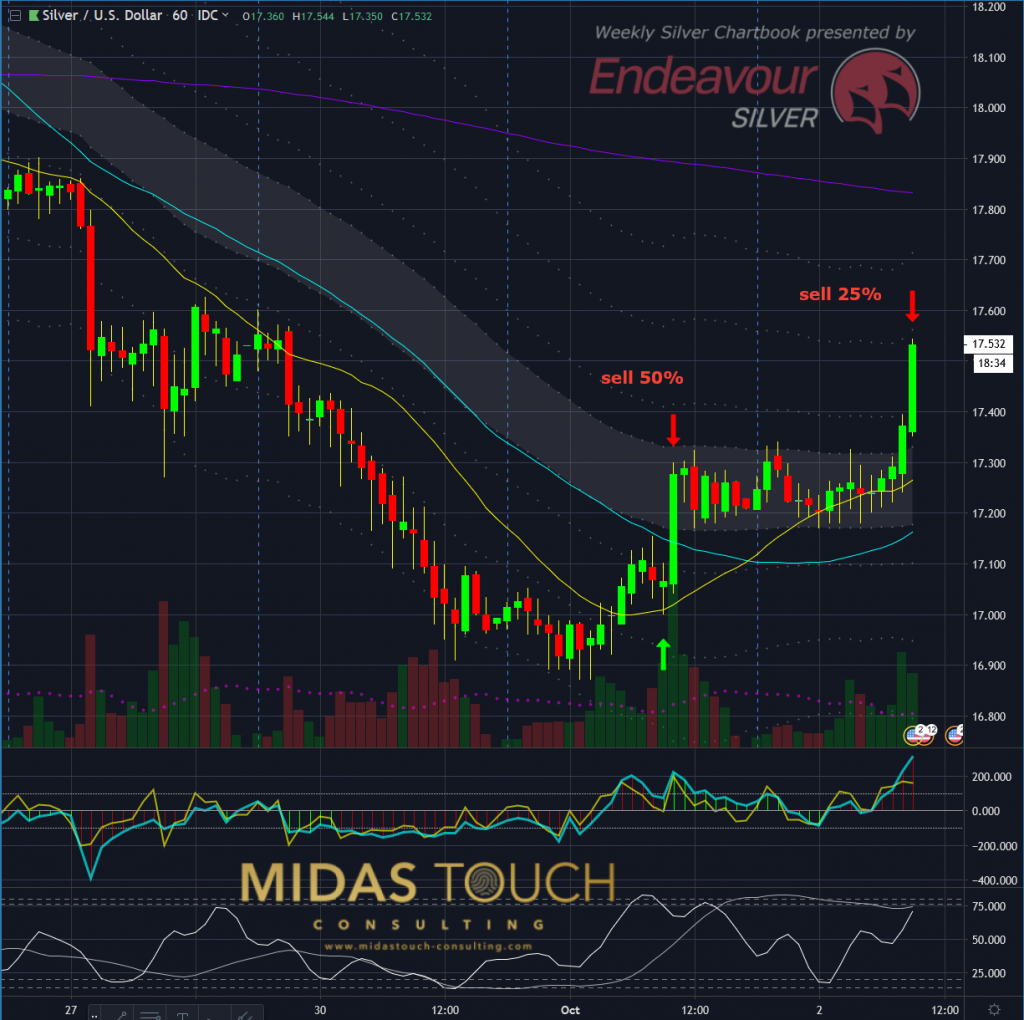 On the 1st of October we had a very low risk opportunity on a smaller time frame to participate in the silver market, as shown in the above 60 minute chart. We instantly took half of the position off for securing profits and eliminating risk. Twenty four hours later our next target was reached and we again took some money of the table. 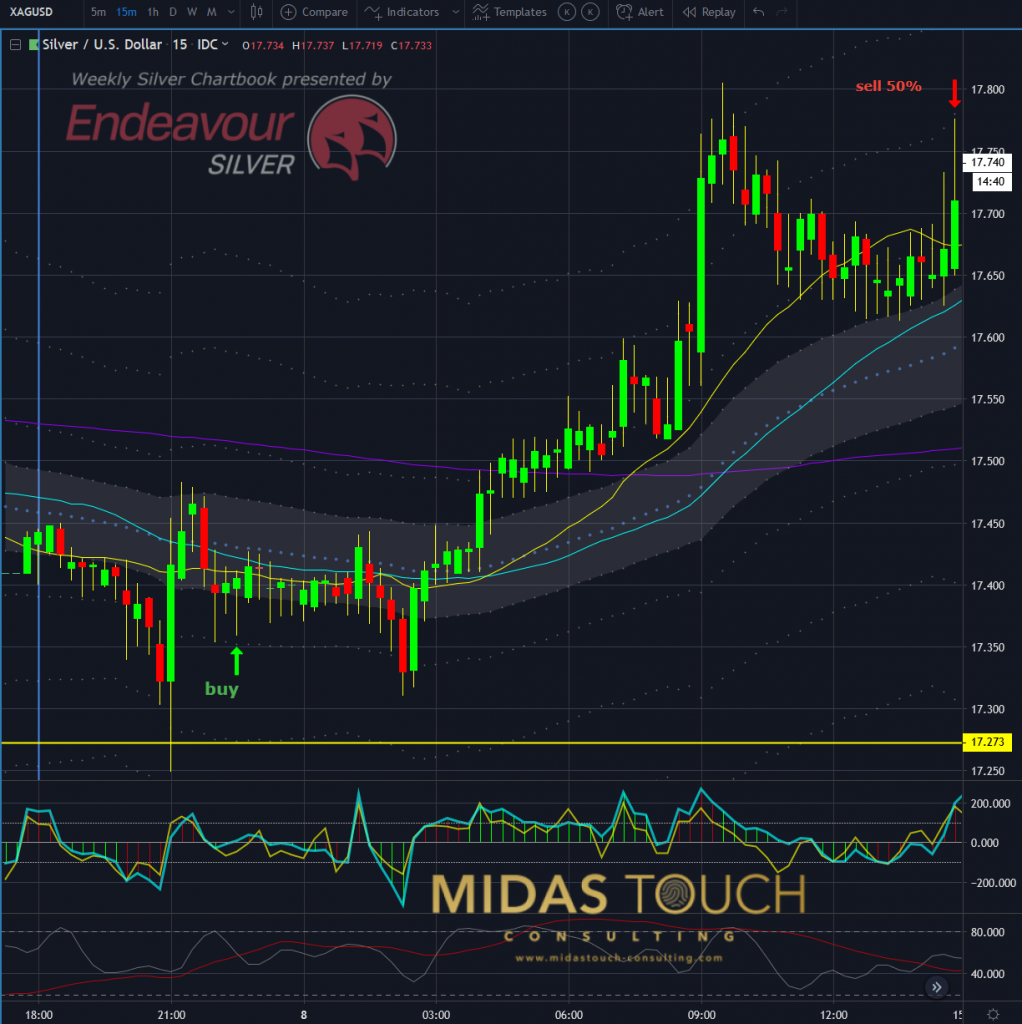 On October 7th, another lower time frame opportunity was taken advantage of. Similarly, we did not give risk much of a chance and as soon as small profits offered themselves, we cut the position in half. This is what we would call an income producing trade.

But that is not all. These trades are taken in a larger context and in a principle based top down approach manner. They do not only provide additional profits towards the larger time frame trades but take advantage of the overall trend condition. That is to say they grow the size exposure through our quad exit strategy by holding on to the runners (last 25% of a position). In other words they hip pocket themselves to the overall long term hold. 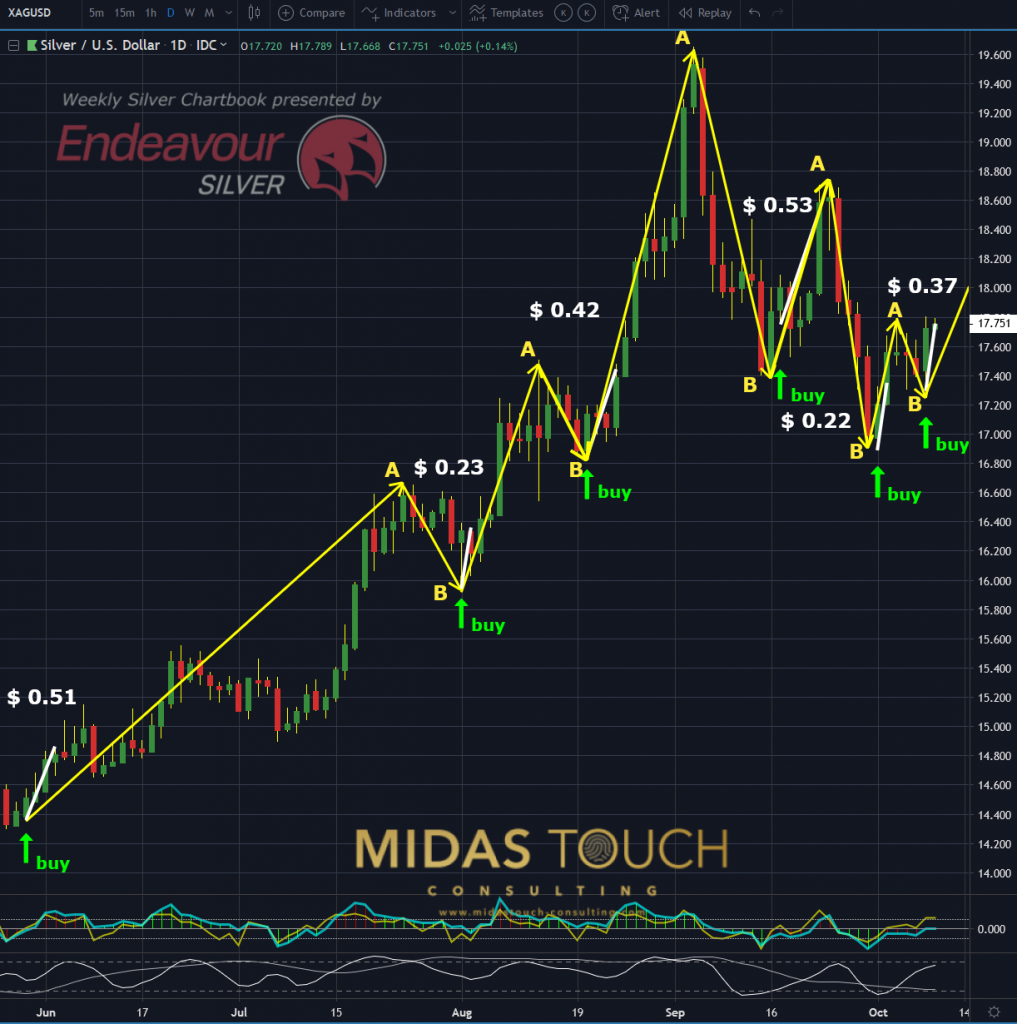 Let us try to simplify the underlying principles of the reload approach. with the daily chart above! The various green arrow up points are actual trades taken in the recent past:

The idea here is to take advantage of the directional edge. No one knows how long a trend persists. Where a statistical edge presides, is in the likelihood that after a retracement, at least a small bounce might occur. This is based on the action/reaction principle. This edge carries enough value to initiate a trade with a higher likelihood of providing an initial profit (white lines).

Now you can see the profits on that first part of the trade aren’t staggering (dollar numbers in white font). The remainder position is a free ride to possibly catch a large move. It can be managed in all sort of ways from a money management point of view, to extend its initial profit expectations by far (if you take like we have, 15 minute or sixty minute setup entries but have the possibility to transfer the runners from the quad exits to weekly or monthly time frames, you end up with phenomenal risk reward ratios on these trades).

While with pyramiding you easily risk the farm when you are wrong, the reload strategy has a vastly different risk profile. Due to the fact that reloads are in their risk profile and psychology stand alone trades, they are truly conservative. In short, they allow the market to dictate if the trader is right or wrong with his/her directional assessment. And this without a heavy price to pay, should the investor be wrong. In addition one is not as limited from a money management perspective and strategy for exit points. The initial conservative profit taking allows for a much more aggressive management of the remainder of the exposed capital within each reload.