A lot of things are happening in the crypto world but none of them seem to be driving prices up. In September BTC went into a bear market according to our Market SQN® score and it was a pretty clear bear trend on the charts. In mid September, for example, the GBCI index was at 405.65. Mid month October, the index was down to 358.28. So its time for the November 15th, Cryptoassets Update.

Cryptoassets started 2019 with three flat months followed by a strong uptrend until the end of June when the Bloomberg Galaxy Crypto Index (GBCI) peaked. The peak in the index this year was on June 26th at 668.61. You can see the clear decline since the Peak in June. 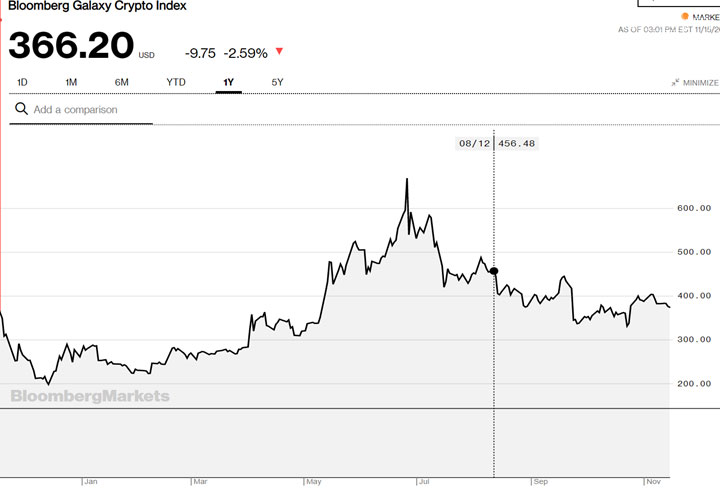 Most of the Altcoins have not done nearly as well as BTC on the year. Effective Sept 12th Binance closed its current operations to US Investors so 25% of the world’s volume for crypto trade lost access to the market for many crypto symbols. That is a huge blow to most cryptos, especially those that won’t be available to the US Market any longer. I replaced SKY with HOT for our table because SKY had dropped tremendously, didn’t have a great market behind it, and was delisted from US ownership. IOTA and NEO are also unavailable to US investors, but I plan to keep them in the table.

One newsletter I receive on cryptos recently remarked that the crypto market is flat with large caps pulling the market down and small caps posting considerable gains. I’m not sure what the writer’s definition of crypto small caps is but hopefully, he’s not including those with less than one million in market cap. His comment is that small altcoins last took the lead in Dec 2018 to April 2019, just before a large surge. This particular newsletter didn’t participate in that market surge, however, as they were predicting a down move at the time.

Two other US Exchanges (Poloniex and Bittrex) also closed to US investors as they moved to foreign control so they could have access to many altcoins and not just a few that the SEC will admit are not securities. New cryptos in the US have to go through the RegA+ process so that they are under the control of the SEC.

This situation is not as bleak as I first thought because of the top 50 coin in terms of market cap, all but BSV, LEO, CRO, XEM, VET, HEDG, HOT, CENNV, VSYS, NANO, ZB, ABBC, and and BTM can be traded by US citizens. Some of those coins that are not available are among my favorites: XEM, HOT, and NANO. So US citizens can still trade 37 atlcoins now through Binance.us unless you are a resident in one of the twelve “restricted states”. If you live in one of those states (as I do), you are not able to trade through Binance.us. (The list of restricted states for Binance.us currently includes – AL, CT, FL, GA, HI, ID, LA, NY, NC, TX, VT, and WA.)

I am adding one new table to this update: the market cap and share of Stablecoins. These coins are pegged to the Dollar/Euro and are in the top 100 or they have a market cap over $50 million. This table compares how much of the total market cap those coins occupy. For example, I have about 10% of my portfolio in the True US Dollar coin. Basically, that’s my cash position. Say the market cap for cryptos was $500 Billion and $5 Billion was in stable coins. That paints a very different picture than if the market cap was $500 Billion and $200 Billion was in stable coins. So, we’ll be looking at that going forward. For the time being, I’m only showing quarterly data, but we’ll report monthly data ongoing.

In January 2018, Tether was #32 at 1.48 billion and I didn’t see any others. But in the most recent month there was Tether, UNUS (which is an attempt to make Tether more legit), USDC, TUSD, Paxos, and DAI. And at one point Gemini Dollar was in there.

Cryptos might be in a bear market, but all of the coins listed in our model are significantly higher than they were last December. I’m now running a regular Market SQN (100 days) program on BTC just to keep track.

On October 15, BTC went into strong bear mode (minus 0.7 or weaker) but it had been off and on-again strong bear since Oct 4th. The last bull market type day was September 20, 2019 when BTC was still over $10,000. It would probably have to get to about $12,000 now to become bull again. For the last 30 days or so, BTC has been in about a $2,000 range (a small range historically for BTC). Right now we are in a strong bear market but if price stayed the same for about 55 more days, we’d be bullish again. 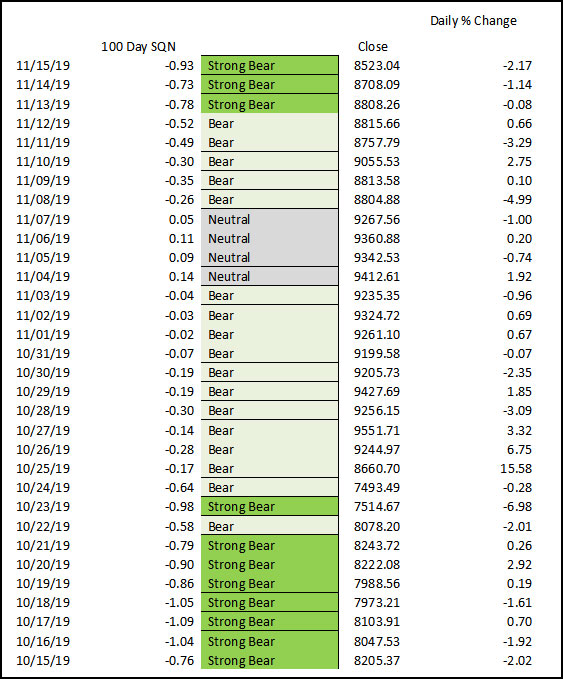 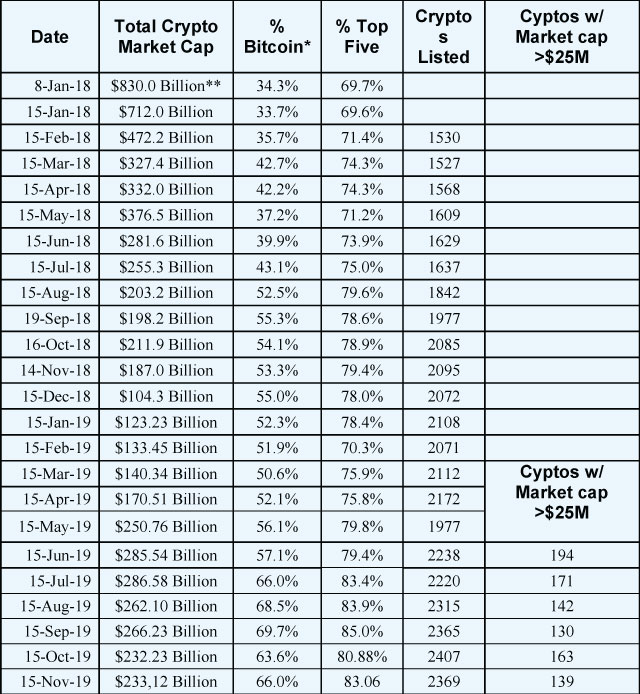 CoinMarketCap lists 2369 total coins, however, after #2022, the remaining coins are highlighted gray. There is a clearer meaning for the grayed coins now – they have an unknown market cap. Right now, only 886 coins have a market cap over $1million.

The next graph shows the price of BTC over the last year. While it’s clearly down from June, from November of last year, it is up. You could describe the pattern as sideways right now. 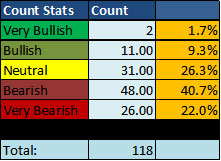 The Top 15 and Bottom 15 Cryptoassets.

Two months ago, BTC was the last bull coin on the top 15 list but now it’s strong bear and is nowhere close to the top 15.

CRPT is the only altcoin I ever bought as an ICO. I should be happy that it’s in a strong bull market, but it’s currently close to the price I paid for it at the ICO.

We are currently in a bear market for BTC so the crypto account should be 100% cash. If you have cryptos now, you are not following the rules of our system(s) and you are trading something that you made up. It’s been over 140 days since the most recent high in BTC.

The Big Picture with Cryptoassets

This is the year that I expect significant institutional involvement in cryptoassets. I’ve said most of the following information in prior newsletters but I’ve updated some of it. Here is what’s going on right now and in the coming months:

Institutions want to own BTC because they see it as totally uncorrelated to other asset classes. So when it becomes possible, I expect them to put 2-4% of their assets into cryptoassets which could give cryptos a market cap of $3-5 trillion. That translates into at least one more very big move in cryptos.

The following two figures should illustrate why Institutions will want to own cryptos. The first graph shows portfolio returns with and without BTC. Adding a small amount of BTC to a traditional portfolio dramatically changes the results. Look what happens to a portfolio of 58.5% equities, 38.5% bonds, and 3% BTC when compared with the S&P 500.

The table below shows the very low correlation between BTC and other asset classes. 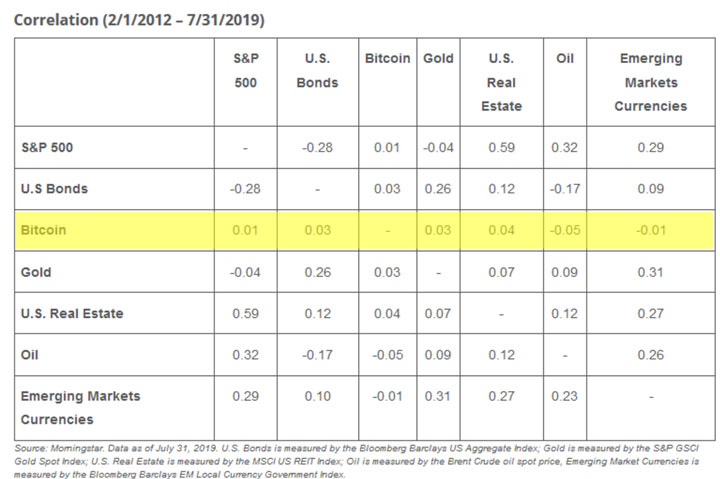 As I have mentioned, the BTC protocol will only allow half as many new coins produced in each cycle in May of 2020. The average block generation time is about 9 min and 20 seconds. Right now, 12.5 BTC are mined in each cycle, but on May 27, 2020, that will drop to 6.25 coins per cycle. This means the supply of new coins will drop at the time when institutions will be wanting them more. BTC usually rises about 200% in the year prior to a halving, however, I would expect the rise to be much greater in a possible roaring bull market in 2020.

Furthermore, newsletters are starting to talk about the death of fiat currencies. First, central banks are buying gold like crazy which is part of the gold rally. The head of the central bank for the European Union is talking about long term negative interest rates (i.e., you have to pay to leave your money in a bank) which requires more electronic money. And they’d hate the idea of having crypto assets that you can move to instead of staying in the Euro. Some newsletters have talked about the deadly possibility of outlawing the holding of cash so the Fed can institute negative interest rates. That would be a huge stimulus for cryptoassets.

My Beliefs About Cryptoassets

Remember that the purpose of this November 15th, Cryptoassets Update is not meant to give investment recommendations or to be predictive in any way. It is meant only to give you a status quo of the cryptoassets markets.

Until December 15th, this is Van Tharp.