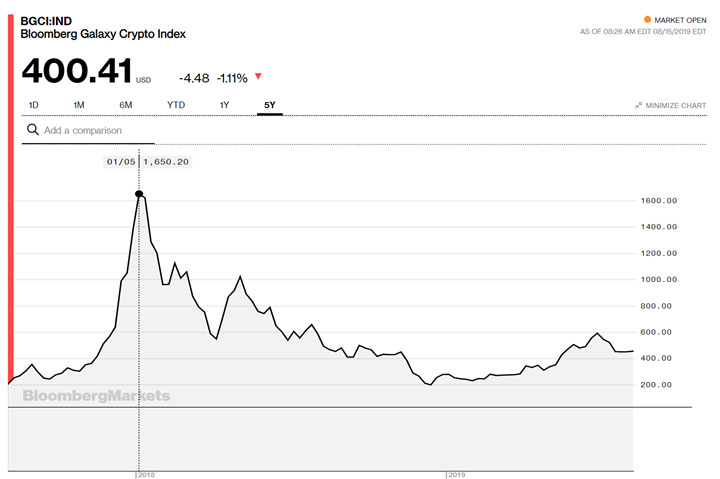 Cryptoassets started the year with three flat months followed by a strong uptrend until the end of June when the Bloomberg Galaxy Crypto Index (BGCI) hit a high for the year of about 600. The index began in early May 2018 at 1000. And if you backtrack it, it hit a high of 1650.2 on January 4, 2018. The GBCI was at 531.37, but today it stands at 400.71 — a drop of 23% in one month . The all-time chart still suggests a bull market, but it’s certainly in at least a correction. The peak in the index this year was on June 26th at 668.61
Bloomberg’s Index tracks ten major cryptoassets and Bloomberg started the index in May 2018 at 1000. Thus, the index has been active for over a year and is now just over 40% of its starting level.
The table below tracks the price of five major cryptoassets across three generations of the technology and I’ve also include GBCI prices:
Just because BTC is a 1st generation crypto does not mean it is likely to die off and be survived by the later generation cryptos. It’s hard (impossible?) to predict which cryptoassets will thrive or even survive as we move forward as there are so many variables in play. Technology, use case, adoption, support, and multiple other factors come into play. For now, we monitor these five cryptos because they represent several relevant aspects: public ledger — BTC, smart contracts — ETH+NEO, scalable contracts at minimal cost — IOTA+SKY. 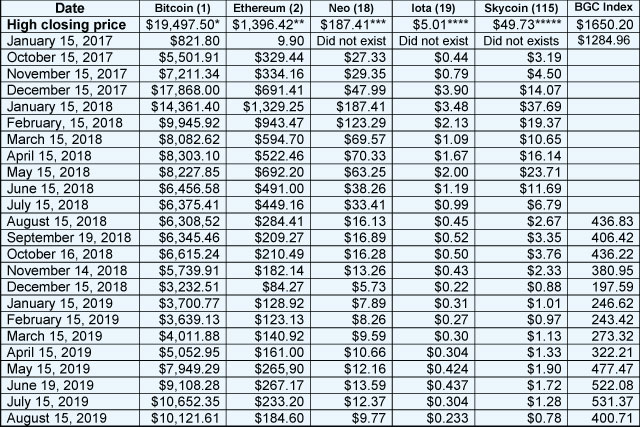 The altcoins (other than BTC) took a huge hit in the last 30 days. BTC, ETH, and NEO are up significantly since December, but Iota is just positive and Skycoin is down. I’m now running a regular SQN 100 program on BTC just to keep track. Here is what that study shows. First BTC has been rated strong bull since April 30th 2019 but it turned bull for three days at the end of July and it’s been just bull for the last two days — so five days since April 30th when it hasn’t been strong bull. The current score is 1.31, but it was at 3.17 on June 25th when BTC was at 12,355.06 and it was 1.85 last month at this time.  That’s about 75 days. The current score is 1.85. In addition, 100 days ago BTC was 5819. Thus, BTC would have to be below that value for the SQN 100 to turn bearish. And in the next 30 days we could get a brief bear signal if it dropped below 8750 and it would clearly be bear below 7000.
I have 1991 data points for BTC right now going back to Mar 3, 2014. I calculate the 20 Day ATR% divided by the close as a percentage. The mean of our data is 5.34 and the standard deviation is 3.05. The smallest number is 1.127635 and the largest number is 22.913. That date was the 1st date that suggested that BTC was now neutral after the huge bull market.
The largest day was Feb 2nd 2018 — when the big bear market of 2018 was just underway. The smallest was Oct 5, 2016 — but most of the smallest numbers were in Oct 2016 and the largest number was the last data point we have on March 3rd 2014. March 2014 was bullish for cryptos and October 2016 was a bear market for cryptos. Thus, we might have an unusual phenomenon in cryptos where we get the highest volatility at close to market peaks. In the current bull market for BTC, it hit its peak in volatility on July 20th, 2017 at 12.80. The 20-day ATR% currently stands at 6.03, just a little above the mean.
The following two graphs show BTC on a weekly basis and since 2014.

The more recent chart shows that BTC is in a band with about a $4000 range to the band. And it’s currently at the low end of that.

One of the crypto newsletters that I get said that BTC had just had its biggest initial bull run in its history, but in July it said that it was now in a corrective phase that could take it down to as low as $7000 — a 50% correction. That price still doesn’t give us a bearish SQN 100. However, it more recently said in early August the correction phase is over — about the time BTC got close to $12K.

The market cap table below shows a similar pattern to the individual cryptos in the table above. The total market cap for cryptos is the highest it has been since June 2018. 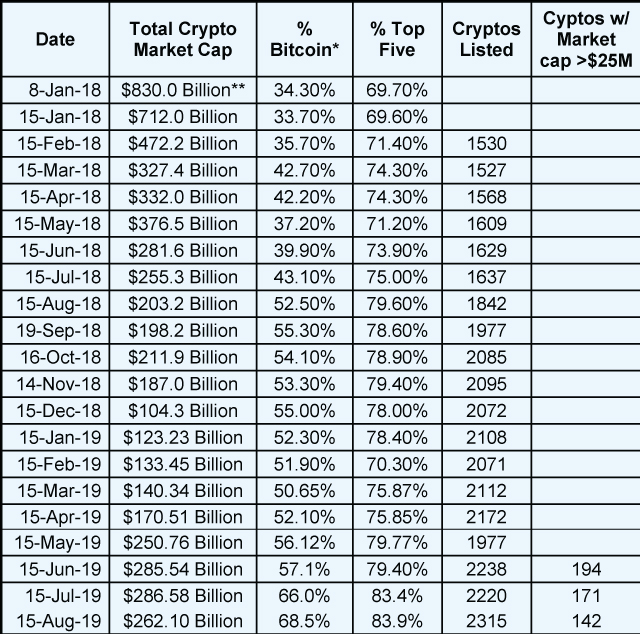 Total Market Cap. as of June 16th 2019 * Bitcoin was as high as 90% of the market cap of all cryptos at the beginning of 2017 to as low as 32% at the top of the market. Part of the difference is that there are now nearly 2000 cryptocurrencies. So the number keeps going up even though the market cap goes down. ** This was the peak of the crypto market in terms of market cap. Data via Tama Churchouse, Asia West Investor email on 4/11/18

We are down to one spreadsheet that we plan to use to monitor cryptos and in it, we use price data from Tiingo (a paid data service). I will just be reporting from the results of that spreadsheet. That spreadsheet does the following: It looks for cryptoassets with (1) over $25 Million in Market Cap with (2) a daily volume over a million and (3) at least 100 days of data to collect the SQN. When we did, the MXM was the top crypto and it shouldn’t be because it clearly has a bear chart in CoinMarket Cap (CMC). We reported it as the top crypto last month, but we now know we had a data problem. We then decided to compare the data from Tiingo with CMC, and throw out any coins in which the data is significantly different between the two data services. You can get today’s data for free from CMC, but longer data subscriptions went from free to very expensive (over $700 per month) so our main data source is Tiingo.
For a while we are dropping our classification of crypto types and just looking at the top coins. The chart below shows the 25 top and bottom cryptos. 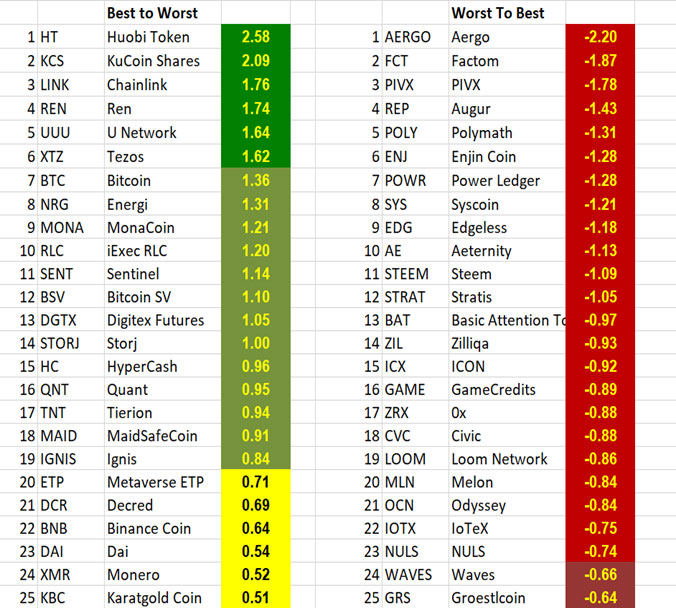 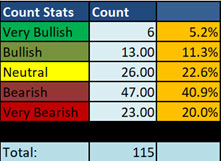 Right now we are tracking 115 coins. Only 19 of them are bull or strong bull. Another 26 are neutral and 70 of them are bearish. We’ll explain why later in the update.

14 coins have a score above 1.0 and only 6 are strong bull. In the bottom 25, 23 are strong bear and 11 of them are below minus 1.0. Some of the bottom 25 include highly recommended coins (by newsletters) including FCT, POWR, BAT, ZIL, SYS, XRX, REP, and ICX. These are either super bargains (don’t buy anything when it is strong bear) or they are poor recommendations.

One of my favorite coins, CND, which we don’t track, is currently way below its issue price of 1 cent and 0.68 — which is close to an all-time low. I just checked the SQN 100 for CND at it was also -0.74 so just on the strong bear list.

I have a rule to never buy ICOs (and the SEC is making it easy on me by calling most cryptos securities), but in the past I did buy one CRPT. I think I got a 30% premium and I got 280 coins for about $100 — I was experimenting with buying an ICO. It took about 4 months after the close to get a listing and suddenly, I had a nice premium. However, it only took another few months before the price was below what I paid for it and that’s when I decided there was little value and too much risk in buying an ICO. It happened to be a good one and a newsletter recently recommended it. The sponsors were quick to tell everyone they went up 40% in value overnight (without saying why), but for me that got me to about break even and I’m below that again. We don’t track CRPT but its SQN is about 1.23 as a result of the newsletter recommendation.

This is the year that I expect significant institutional involvement in cryptoassets. Here is what’s going on right now and in the coming months: