Strong bounce within the downtrend channel!

Since my last “official” analysis on this site, Bitcoin indeed continued its way down and reached the “potential buying zone between 8,000 and 8,500 USD” two times (March 9th and March 11th). The expected but very fast bounce out of this zone made it back to 9,900 USD. But the failure already below the psychological resistance at 10k was too much for the bulls and Bitcoin prices immediately turned back down. In the following days, bulls lost even more confidence and prices went into free fall until the recent low at 7,250 USD.

As the rollercoaster show must continue a massive bounce from extremely oversold levels started here which took Bitcoin quickly back to 9,177 USD. Some of the altcoins came back to life as well during this furious recovery. EOS exploded 88%, IOTA bounced 50% and Qtum nearly doubled. After the strong downtrend since early March, this was a healthy and necessary bounce for the whole crypto sector.

Yet basically all altcoins and Bitcoin itself continue to trade way below their December/January highs and have not been able to break out of the established downtrend channels. 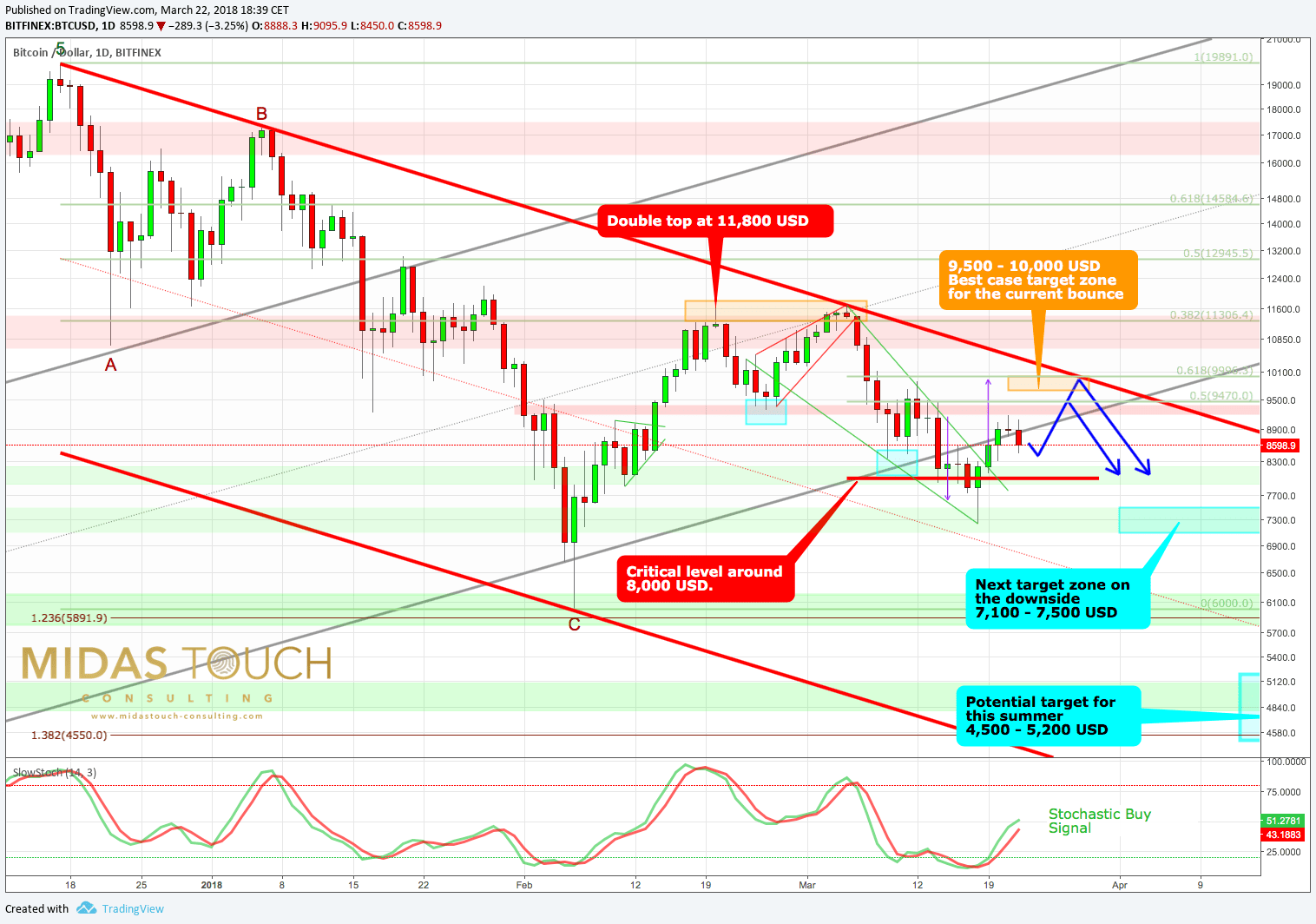 Although the recent bounce (short squeeze) made it back to 9,177 USD, the daily close has been below the critical 38,2% retracement level (8,943 USD). Remember at 11,800 USD, this behavior has been a clear sign of weakness and as of now, it seems to be the case again. But should Bitcoin be able to move above yesterday´s high at 9,177 USD it is very likely that the recovery will continue towards 9,500 – 10,000 USD. This would be a great opportunity to reduce one´s exposure and/or open some hedges. I doubt that Bitcoin will be able to break through the downtrend channel!

Overall I expect a confusing and irritating sideways movement over the next couple of weeks. There will be some good short-term opportunities in both directions but I guess after these wild swings its time to take a breather and calm down at least a little bit. As well volatility will have to shrink. As long as Bitcoin stays above 8,000 USD bulls are in control for now.

The next good buying zone for a multi-day swing trade seems to be around 7,100 – 7,500 USD and of course around 6,000 USD. But until the summer I continue to expect prices to correct down towards 4,500 – 5,000 USD. Only if Bitcoin should move above 10,000 USD the big picture would improve quite significantly.

In our Telegram Channel, I wrote on Thursday 15th of March 2018 “The latest CoT-Report for Bitcoin Futures shows massively increased short positions by the large speculators which usually are trend-following hedge funds… Expect a short squeeze soon or later… !”

For anybody who doesn’t know, all of the U.S. futures markets are regulated by the Commodity Futures Trading Commission (CFTC). They publish the current positions of the large reportable traders based on positions held during the prior Tuesday. This report is called CoT-Report and is available every Friday afternoon. Of course, the report is three days behind but as we know from the gold market, for example, it always is a very helpful study and delivers some insight. This information is still relatively new to the unregulated crypto markets and should become very valuable in time. In the short term, however, only a very thin data series is available so that comparisons and classifications of the current positions have to be treated with caution.

The latest report shows a massive short position held by the large speculators which are the trend following hedge funds that are typically on the wrong side of the market extremes and peaks. As of Tuesday 13th of March, their cumulated short position corresponded to 73.7% of total open interest which is usually a very unbalanced and extreme constellation in other future markets. A Bitcoin future contract represents five bitcoins which leads to a cumulated short position of 12,295 Bitcoins (4,737 shorts – 2,278 longs x 5). Multiply that with current prices of 8,673 USD and you will know that the large speculators have been 106.6 Mio. USD short in Bitcoin. This does not seem to be such a huge number but considering that the existing liquidity on many exchanges does not provide a good order flow at levels above 50-100k USD, it is huge for the Bitcoin market in the short term. Therefore the sharp and steep bounce that started last Sunday came as no surprise and should be treated as a short squeeze. The new CoT-report this Friday afternoon will give us new insights as to which level the large speculators were forced to close their shorts. 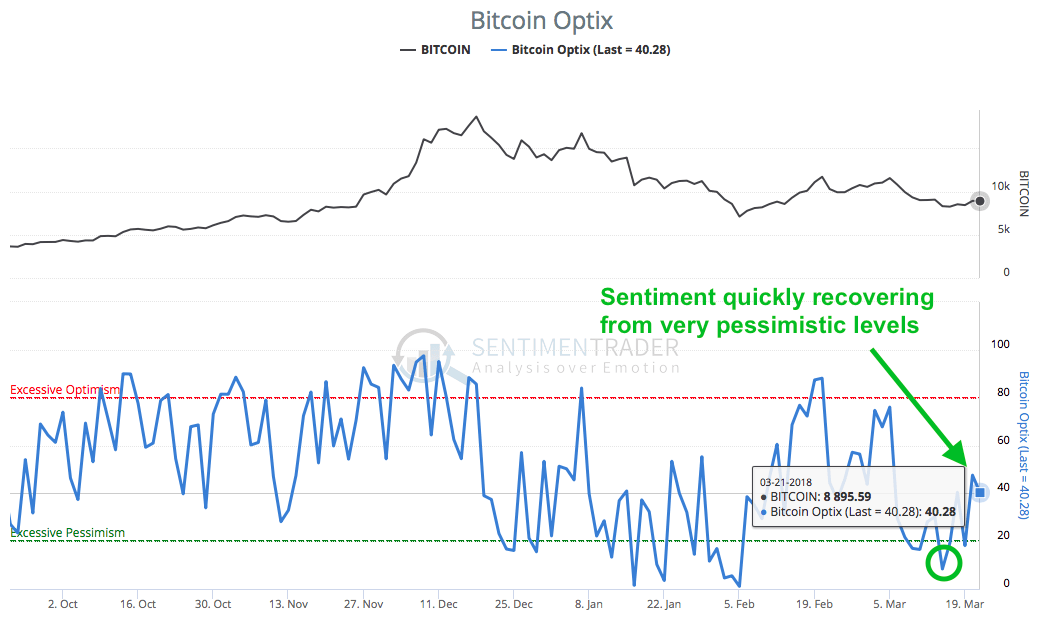 Parallel to the extreme constellation in the CoT-Report the sentiment numbers for Bitcoin reflected an extremely pessimistic mood and panic among Bitcoin traders and investors. Usually, although hard to measure, sentiment numbers are a very good indication and an indispensable tool for contrarians. Of course, in the last couple of days, the promising setup has already changed due to the strong bounce from 7,250 USD up to 9,150 USD. As of now, sentiment has to be classified as more or less neutral.

So far there is no indication that the “crypto winter” is over. We only got one strong bounce which so far has failed to settle above the 38.2% retracement. Therefore there is no need to chase strength here. Instead, I would patiently wait again for another oversold situation to buy the dip and at the same time would use any strength towards 10,000 USD to open/increase hedges and short positions.