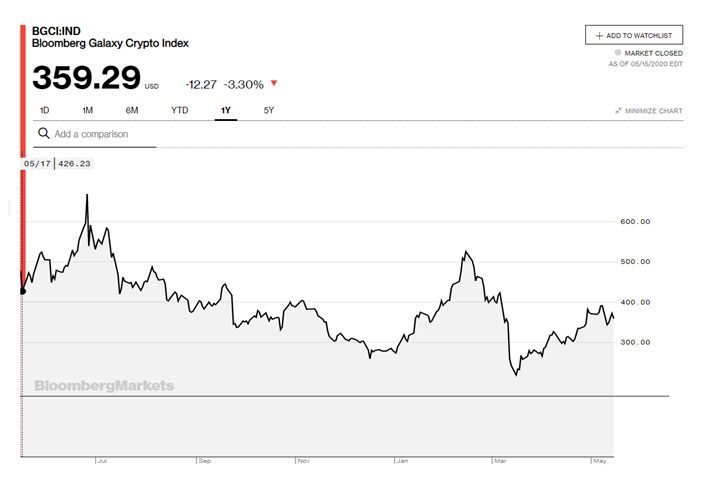 Cryptoassets are still the wild, wild west of markets with basically no regulation, lots of market manipulation, and now 100 to 1 leverage is some cases. This is why you shouldn’t invest in cryptoassets anything more than you can afford to lose. Say at most 10% of your liquid net value and perhaps 2-5% is better. It will probably continue to be the wild west until we see a multi-trillion dollar market cap and a much more regulated market. And who knows what the nature of the market will be once that happens.

Let’s look at the biggest crypto exchange, Binance, as an example. First, Binance was located in China where about 65% of the miners are located. But because of frequent mixed signals from the Chinese government, Binance moved to Japan. The regulations started to toughen in Japan so it moved to Malta. Malta is considered to be a crypto haven and the government doesn’t tax long term crypto profits. In addition, Binance is prepared to move to Nigeria on quick notice should things get difficult for it in Malta.

For a while, Binance was the primary crypto exchange in the US. Once the SEC claimed that cryptos were securities, unless proven otherwise, many crypto exchanges in the US closed and most cryptos moved to exchanges where US Citizens were not allowed to trade. Binance closed its exchange to US citizens last September and then it opened Binance USA, however, 13 states still deny their citizens trading on Binance USA. North Carolina is one of the thirteen states.

Let’s look at the ways that Binance has become much more than just a crypto exchange. Binance also operates coinswitch, which is peer to peer trading (through their exchange) and it gets around some US regulations that way. Further, Binance has created a vertical monopoly –

As an example of that last point, I happen to like a crypto token called Cindicator which uses artificial intelligence to make predictions about what cryptos and other assets will do in the future. You need a million tokens (and I have a lot more than that) to get the full predictions, however, I noticed that Binance has more than 30% of the market cap of CND in its vaults.

So think about what we see here. 1) Binance is totally unregulated and can do what it wants. 2) It’s the largest crypto exchange in the world, 3) It has its own futures exchange with crazy people trading BTC at 100 to 1 leverage. And now 4) it also mines BTC. Can you imagine the level of market manipulation that Binance is capable of?

For example, last year a whale (large crypto owner) sold about 25,000 worth of BTC on Coinbase and sunk the price promptly about $2,000. The whale managed to buy back the entire amount without moving the price. I have no idea who the whale was, but who is capable of dropping the price $2000 in an hour and then re-acquiring the position without moving the market at all?

Bottom line is what I said previously – crypto trading is the wild, wild west with lots of manipulations going on.

Let’s look at the crypto market from another perspective. While Binance could keep the price down for some time with their resources, however, it’s losing $3000 per BTC being mined and I’m sure their long term interest is to sell their BTC at a very high price – say $50,000 or more. So, at some time in the future, it will stop lowering the bids. The same is probably true for every other large crypto holding that it has.

Would you buy 40% of CND if you thought it was going to go to zero? I doubt it.

Furthermore, if you had a major impact in controlling the price of BTC, held 80,000 BTC, and mined 4.5% of BTC, would you be willing to mine BTC at a loss for long? I doubt it. So it’s pretty logical to assume that the price will soon be above $12,500 – the breakeven price for mining now.

A BTC price above $12,500 is not a prediction but rather a logical conclusion based upon past data. The context could still change enough that past data is meaningless.

The chart below shows what happened in prior halvings. 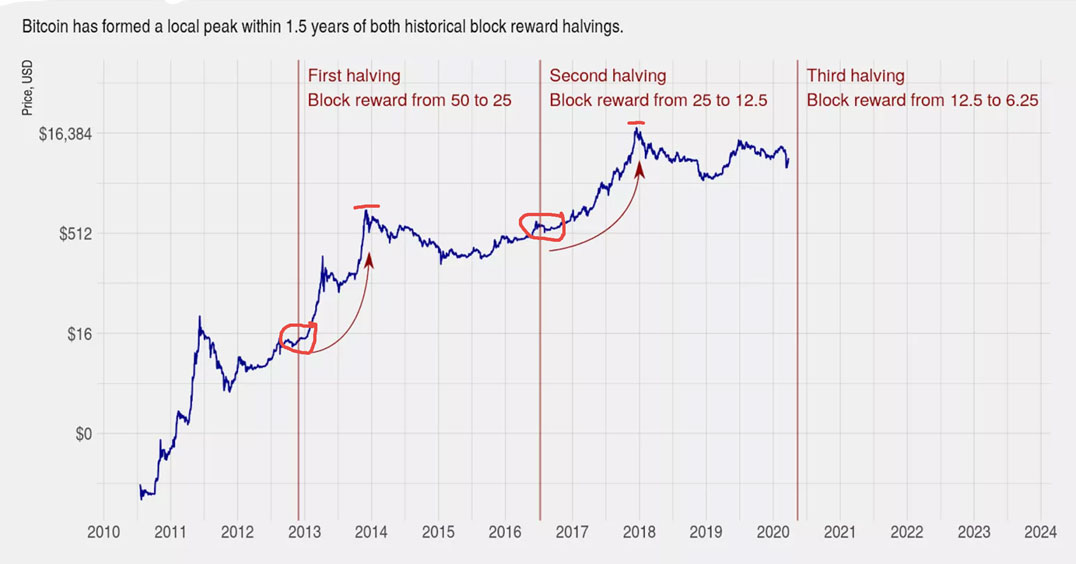 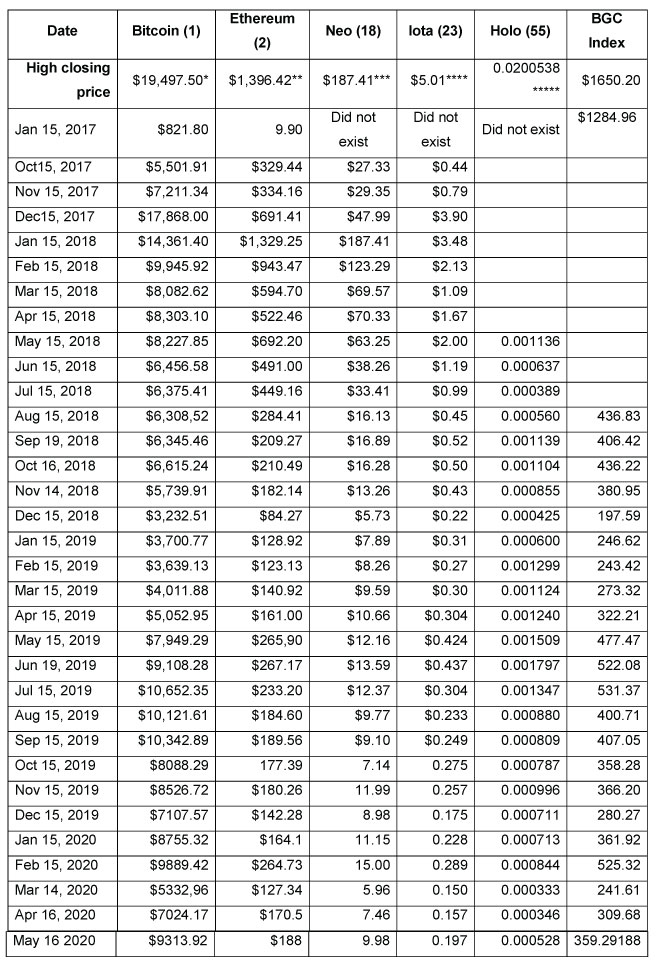 Total Market Cap, Cryptoassets update as of May 15th

The following table tracks the amount of money in stable coins in the top 100 or which have a market cap of over $100 million. The percentage of the total crypto market cap indicates one measure of health for the crypto market. 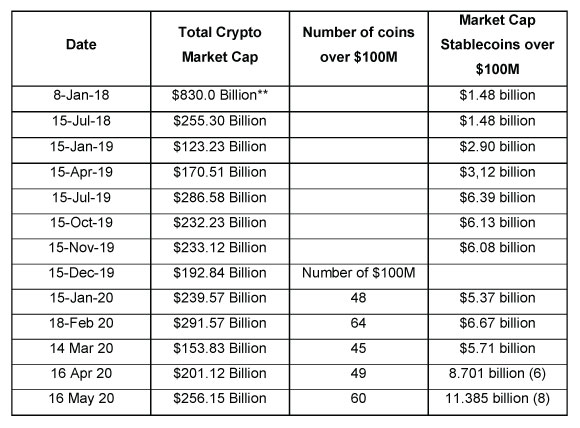 So we have had a market cap recovery of about 30%. However, we have also had the largest weekly increase in the US Stock market last week because of Fed Repurchasing. 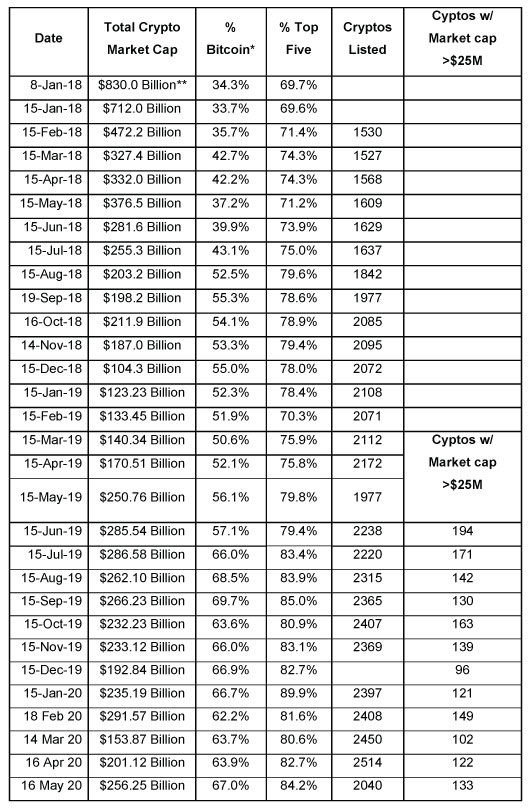 Total Crypto Market Cap since January 2018
* Bitcoin was as high as 90% of the market cap of all cryptos at the beginning of 2017 to as low as 32% at the top of the market. Part of the difference is that there are now nearly 2000 cryptocurrencies. So the number keeps going up even though the market cap goes down.
** This was the peak of the crypto market in terms of market cap. Data via Tama Churchouse, Asia West Investor email on 4/11/18

This month we are following 120 cryptos. Those include most of the top 75 cryptoassets in terms of market cap, but there are still some for which we cannot get data. 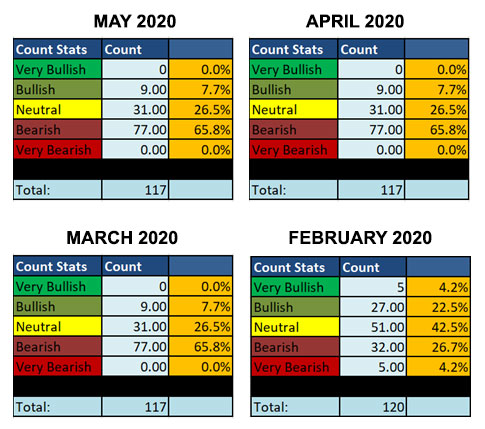 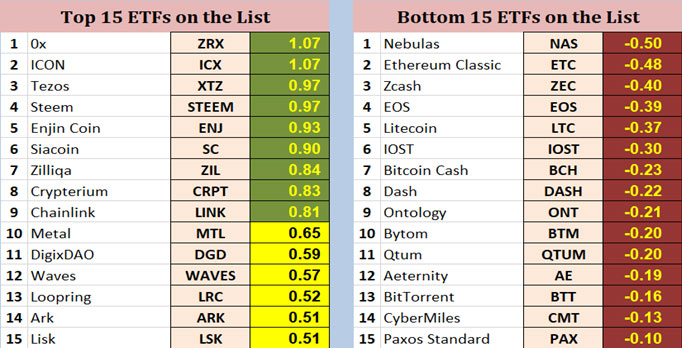 The chart above shows the 15 top and bottom cryptoassets. There is nothing in these rankings to get excited about, in my opinion.

In February I said BTC was in a bull market based upon our ST system criteria for a bull market. That trade was stopped out on March 8th. My belief at the time was that can’t be real! This is one reason that I consider the BTMT format to be the Holy Grail of trading because 1) you only trade your beliefs and 2) it shows you when your beliefs want to override a system.

My thought was “What’s going on?” It was only our third loss in the system and the biggest loss with a 14% decline. Now it looks like a great move. We were out at US$8,039 and the market dropped below US$5,000 for a few hours.

We got another trade in May – just five days before the halving. It’s now down 5% after four days of holding it.

This system is one of the five cryptosystems reserved for Super Traders but we do not trade BTC this way so I’m willing to show you it’s performance and I will continue to track it in this update.

I have no idea where this market is going, but my guess is that cryptos will remain uncorrelated with the rest of the market and will be much higher by the end of the year.

Paul Tudor Jones has purchased BTC for US$160 million

For example, Paul Tudor Jones has US$8 billion under management. He just announced to his shareholders that he has purchased 2% of his portfolio (US$160 million) worth of BTC as a hedge. A lot of other hedge funds will follow suit.

I have another way of looking at the top-performing altcoins. I use cointrackinginfo.io to keep track of the taxes on my positions. They list about 100 coins that I either own now or that I used to own. And I can get a 30% percent gain from that list. Based upon that information the top 10 coins are as follows. 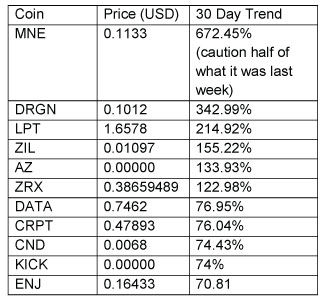 Top-performing altcoins over the last 30 days

CND may be up because I mentioned to my Super Traders when it was at US$0.004 that they could buy a million coins for US$4,000 and get all the top CND predictions (it’s an artificial intelligence coin) for almost nothing and that the possibility of the coin going to US$5.00. Disclosure: I own over a million CND. 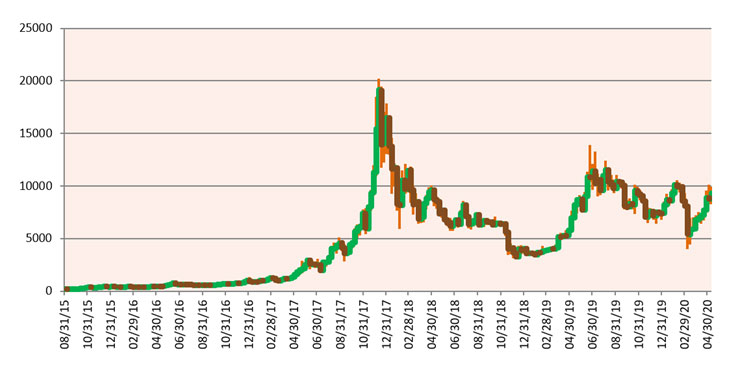 BTC prices for the last 12 months

We have given those of you who took the trading genius workshop the bonus gift of another day and a trading context. That contest started on April 27th. There are 20 entries so far and the leader is Joyti from Tasmania. The top prize is US$2,500 in gifts. RJ Hixson, Ken Long, and I will all be participating. If you watched Trading Genius 2, I encourage you to submit your entry (it’s hypothetical trading, not real money positions) because you will learn a lot about yourself and your beliefs. (For example, the submission of buying one crypto on the 1st day and holding it to the end is rather insane.). I’ll give you a hint about how I’ll be trading it – I’m not going to buy anything that isn’t going up at the time and I will have an exit for all positions. If you participated in that course, you can submit your system still now. Most of the 20 contestants do not have positions yet. Click here for details.