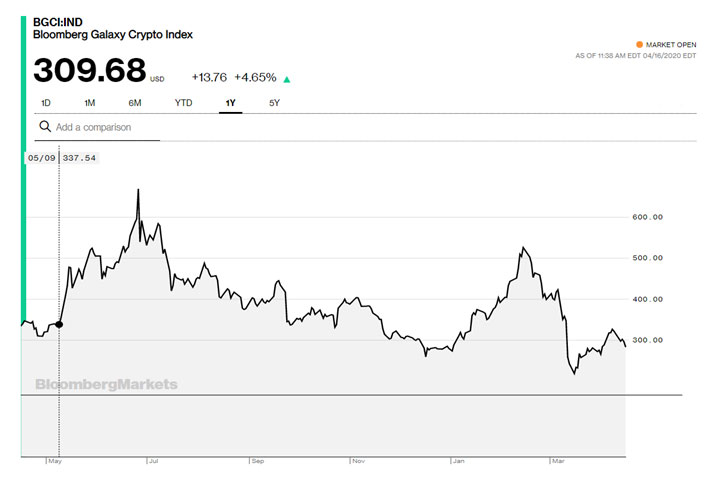 So what happened? Yes, there is a global pandemic going on that could destroy the economies of some countries but cryptos are supposed to be a non-correlated asset. Well, two things happened and I mentioned the first one last month.

Cryptos have been impacted by a massive Ponzi scheme that happened in China where people were conned to putting BTC and ETH into a massively high yielding investment. The Chinese government closed them down, but not before they got away with 1.8B BTC and about 6.4M worth of ETH. They were unloading it as fast as they could through big trading desks. Those desks new exactly what they were up against so they continually lowered their bid. BTC went below $5000 so I’m sure they’ve sold it all, however, COVID-19 started to scare investors globally which also hit cryptos. Now cryptos are not correlated with the stock market and shouldn’t care the least about what stocks are doing, but the pandemic scare caused a massive liquidity crisis. A lot of people were trading on margin and had to liquidate everything, including their cryptos. I’d expect cryptos to come back before anything else.

The second event that happened is now that there is a little more institutional involvement and futures contracts on BTC where BTC can be traded at 100 to 1 leverage. That’s insane on an asset class that can easily drop or rise 20% in a 24 hour period. So when people had to liquidate some positions because of what was happening in equities, everyone long at 100 to 1 leverage also had to get out the market as quickly as possible. And I’m sure those contacts represented a lot more BTC that was available. Hence between these two things helped produce a 50% crash.

Cryptoassets are still the wild wild west with unregulated markets, lots of market manipulation, and now 100 to 1 leverage is some cases. This is why you shouldn’t risk anything more in cryptos than you can afford to lose. Say at most 10% of your liquid net value, and perhaps 2-5% is better. It will probably continue to be the wild west in cryptos until we see a multi-trillion dollar market cap and a much more regulated market. Who knows what the nature of the market will be once that happens.

Bitcoin Cash just had a halving and the primary one for BTC is due in 3,716 blocks which is now estimated to occur on May 11. Thus, by the next update it likely will have already have taken place. There is actually a bitcoin clock that you can find at https://www.buybitcoinworldwide.com/bitcoin-clock/.

Bitcoin halving probably on May 11th

When Bitcoin halvings take place, the miners only can get half as much BTC as they did prior to the halving. When BTC first came out, 50 BTCs were issued every 10 minutes. But every four years that drops in half. So it first dropped to 25, after four years, then the 12.5, which is the current rate, but it will soon become 6.25.

When this happens the miners make half as much money and they usually refuse to sell BTC until the price at least doubles and it usually does so quickly after a halving and then skyrockets. Perhaps we’ll see new highs by the end of this year but this is not a prediction; it’s based upon past data.  The context for this halving could change enough that past data is meaningless. The chart below shows what happened in prior halvings. 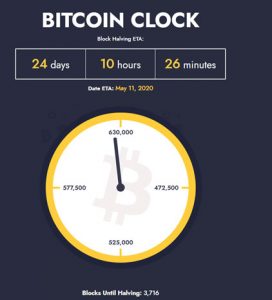 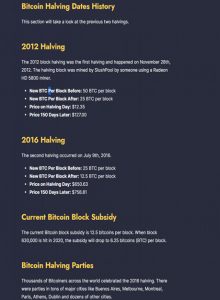 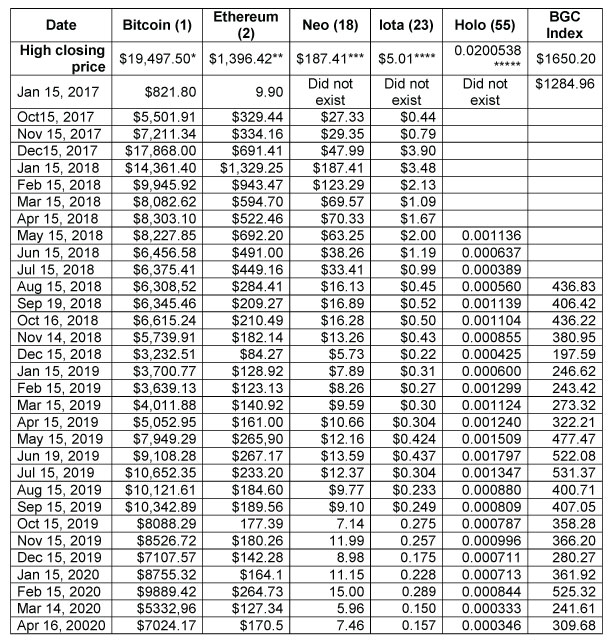 The following table tracks the amount of money in stable coins in the top 100 or which have a market cap of over $100 million. The percentage of the total crypto market cap indicates one measure of health for the crypto market. 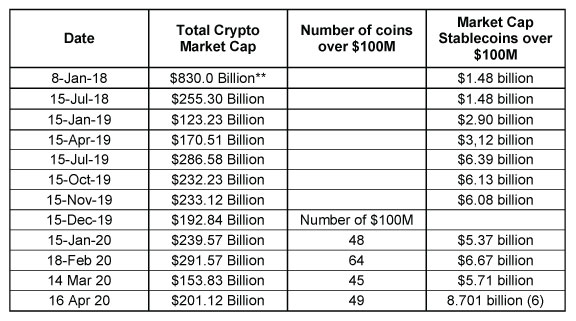 So we have had a market cap recovery of about 30%, however, at the same time, we have also had the largest weekly increase in the US stock markets last week because of Fed Repurchasing. 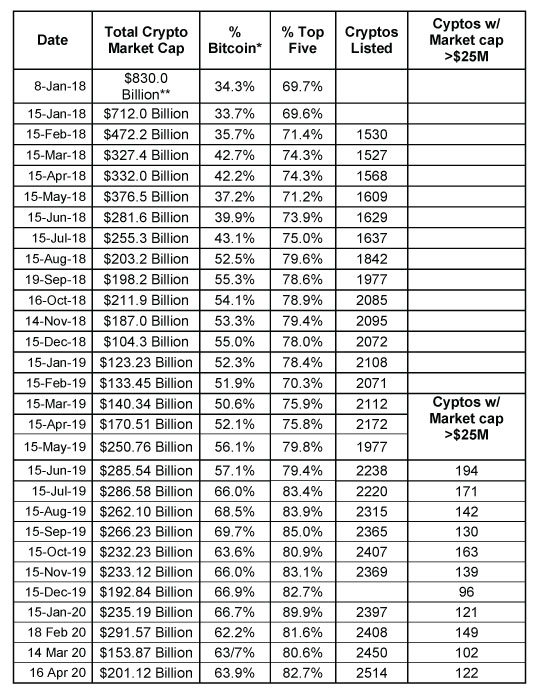 * Bitcoin was as high as 90% of the market cap of all cryptos at the beginning of 2017 to as low as 32% at the top of the market. Part of the difference is that there are now nearly 2000 cryptocurrencies. So the number keeps going up even though the market cap goes down.
** This was the peak of the crypto market in terms of market cap. Data via Tama Churchouse, Asia West Investor email on 4/11/18

I only trust what’s listed in the top 200 of the Coinmarketcap.com list – and that doesn’t mean I’d come close in investing in any of them. For example, one of my favorite coins is CND (which is an artificial intelligence coins for making investment decisions). It started out at one cent. It went as high as 30 cents, but right now it’s only listed at 0.0038 with a market cap of $7.5M. However, the developers still have about $15M for the ICO and they’ve started a fund.

Another one of my favorites in 2018 was FCT because they were getting government contracts. The high price was $81. But something happened along the way – last week they declared themselves to be insolvent if they couldn’t raise more money. They ended up staying solvent but with only two employees left. It’s currently priced at 1.79 (which is up 10.9% over the last 24 hrs and has a market cap of $16M).

The Top 15 and Bottom 15 Cryptoassets

This month we are following 120 cryptos which include most of the top 75 cryptoassets in terms of market cap but there are still some for which we cannot get data.

The three tables above show the Market SQN® rankings of the 120 crypto over the last 3 months. We’re up from 6 bullish cryptos to 11 this month and from 29 neutral to 57. We are still way below the numbers in February, 2020.

The following chart shows the 15 top and bottom cryptoassets. There is nothing in these rankings to get excited about in my opinion. 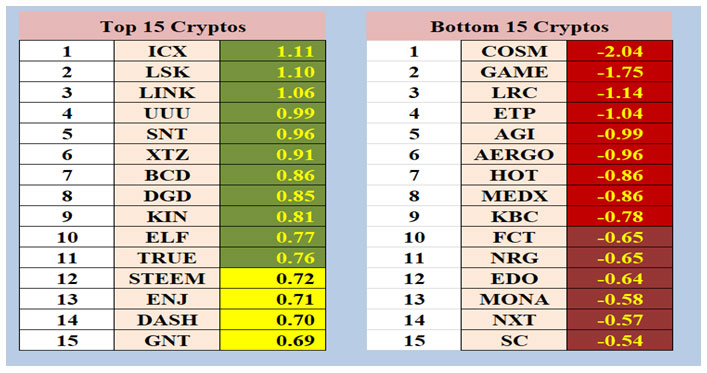 In February I said, BTC was in a bull market based upon our ST system criteria for a bull market. That trade was stopped out on March 8th. My belief at the time was that can’t be real! This is one reason that I consider the BTMT Format to be the Holy Grail of trading because 1) you only trade your beliefs; and 2) it shows you when your beliefs want to override a system. My thought was “What’s going on?” It was our third loss in the system and the biggest with a 14% decline. Now it looks like a great move. We were out at $8039 and the market dropped below $5000 for a few hours.

That system is one of the five crypto systems the Super Traders can learn but we do not trade BTC this way so I’m willing to show you its performance and I will continue to track it in this update. At just over $7,000, BTC is a long way from a new buy signal but it could happen by the end of May. And who knows a 30% surprise up move would also do it.

I have no idea where this market is going, but my guess is that Cryptos will remain uncorrelated with the rest of the market and will be much higher by the end of the year.

We have given those of you who took the Trading Genius 2 workshop the bonus gift of another workshop day in the fall and a trading contest. That contest was supposed to start on Wednesday March 18th, but I’m waiting to start it until at least a third of the people in the workshop submit entries. The top prize is $2500 in gifts. RJ Hixson, Ken Long, and I will all be participating. If you watched Trading Genius 2, I encourage you to submit your entry (it’s not trading real money; its hypothetical trading) because you will learn a lot about yourself and your beliefs.

I’ll give you a hint about how I’ll be trading it – I’m not going to buy anything that isn’t going up and I will have an exit for all positions. If you didn’t participate in the live Trading Genius 2: Systems Thinking workshop, you can sign up now to watch the recorded sessions. You can also submit your system for the contest – even if the contest has started. Click here for details. We also provide another bonus – a video by Ken Long discussing systems thinking and how he uses it to improve his trading.

We have also released our last Bear Market Workshop out as a video on demand so that you’ll better understand how to cope with this market.