Also known as the chinese EOS, High Performance Blockchain (Currency: HPB) is another protocol that aims to deliver a fast and highly scalable blockchain network. With its targets of more than 1 million transactions per second, low latency and a three second confirmation time, HPB has joined the race towards becoming the best high throughput blockchain.

The most important aspect that sets HPB apart from similar ventures is the fact that they do not only focus on software structure, but also on hardware architecture. These native hardware technologies, also called the Blockchain Offload Engine (BOE), will be used to tackle security and scalability issues. These chip accelerator engines will run the blockchain in collaboration with traditional mining. According to the roadmap of HPB, version 1.1 of the Mainnet will launch by the end of June. 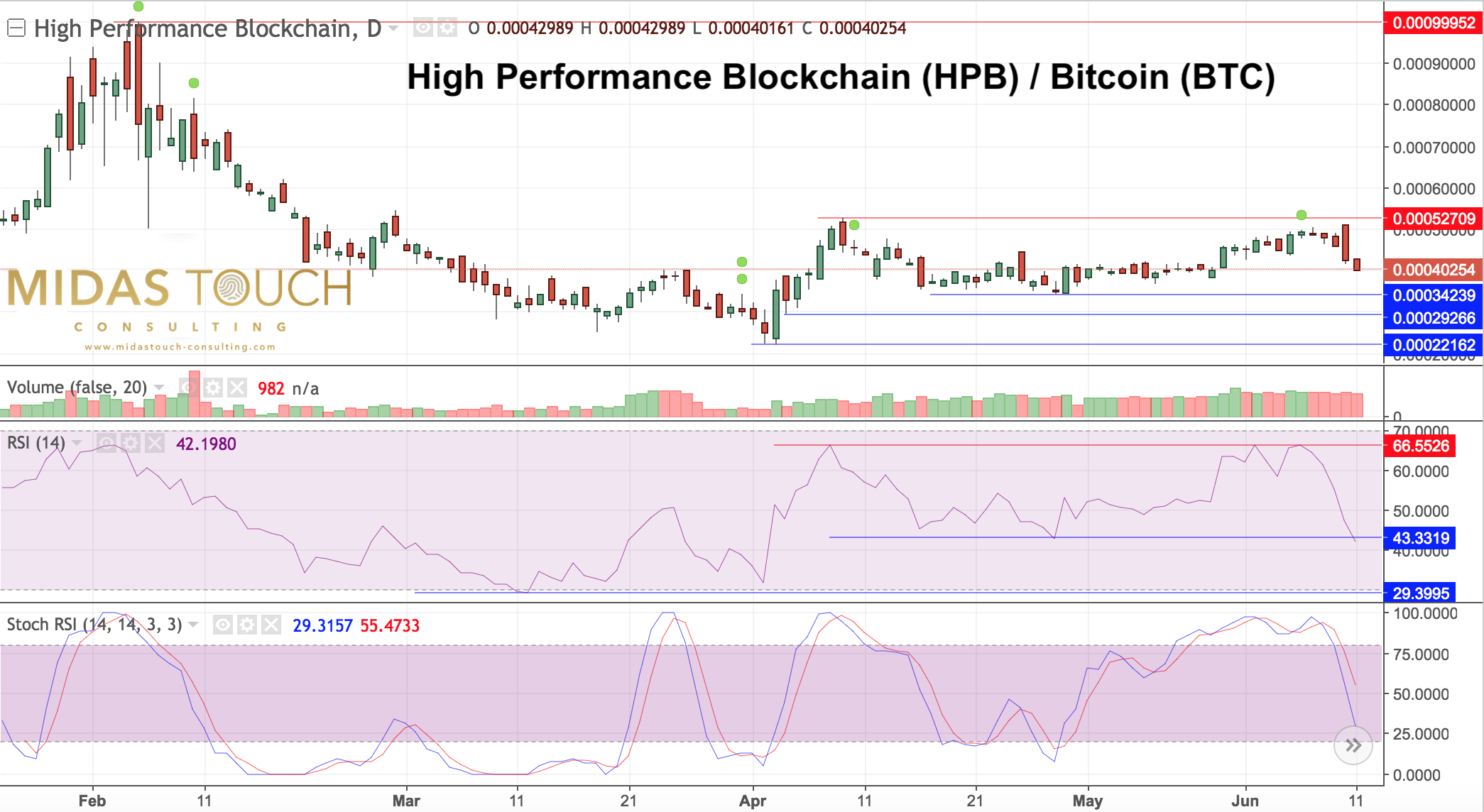 With a current market capitalization of less than $80 million USD and the coming Mainnet launch, HPB can be seen as comparatively undervalued. However, as almost all Altcoins are highly influenced by the price of Bitcoin, investing in HPB right now comes with high risks. It recently got rejected, once again, by the 67 RSI level. The Stochastic RSI has already crossed and is currently heading downwards. The next significant support zone would be the previous higher low of 34,541 Satoshi. If this support fails to hold, the areas around 29,486 and 21,879 Satoshi offer additional support. Once the price reverses, the previous high area of 53,068 Satoshi will act as a major resistance.

The largely unknown Chinese gem High Performance Blockchain (HPB) is a “high performance” underlying public chain based on hardware accelerator chip drive. They aim to create an easy-to-use high-performance public chain optimized for hardware acceleration and software algorithms, and to promote the commercialization of blockchain technology. HPB´s main target market are big companies and industries that are using large amount of data. In their white paper they already mentioned companies like Baidu, Alibaba and Tencent. Other target markets include the IOT, financial industry, medical industry, governments and supply chains. HPB´s goal is to simplify the use of these huge amounts of data and to speed up the data transfer & transactions. HPB has already direct partnership with China Unionpay and NEO. China Unionpay is three times larger than Visa!

All in all, High Performance Blockchain is the world’s first platform that provides microchip speed enhancing, predicted to breakthrough the current bottleneck of 3,000 TPS, with lots of stability in between. With its open source architecture HPB will likely attract blockchain developers to integrate and develop their Dapps into their platform. The HPB team largely came from Huawei (telecom company), IBM, China Union bank etc, and certainly has massive experience in internet, IT and in the banking sector. The HPB team is currently running hardware controls and confirming quality as well as functionality of the hardware board.