The last couple of months have certainly been quite challenging for many crypto investors and all the new blockchain and token companies. After pushing towards its all-time high at $20,000 in mid of December, Bitcoin (BTC-USD) prices corrected sharply down reaching $6,000 in early February. Since then the leading crypto currency has been trading within a triangle formation creating higher lows but also lower highs. Now this multi-month consolidation triangle has been broken to the downside. 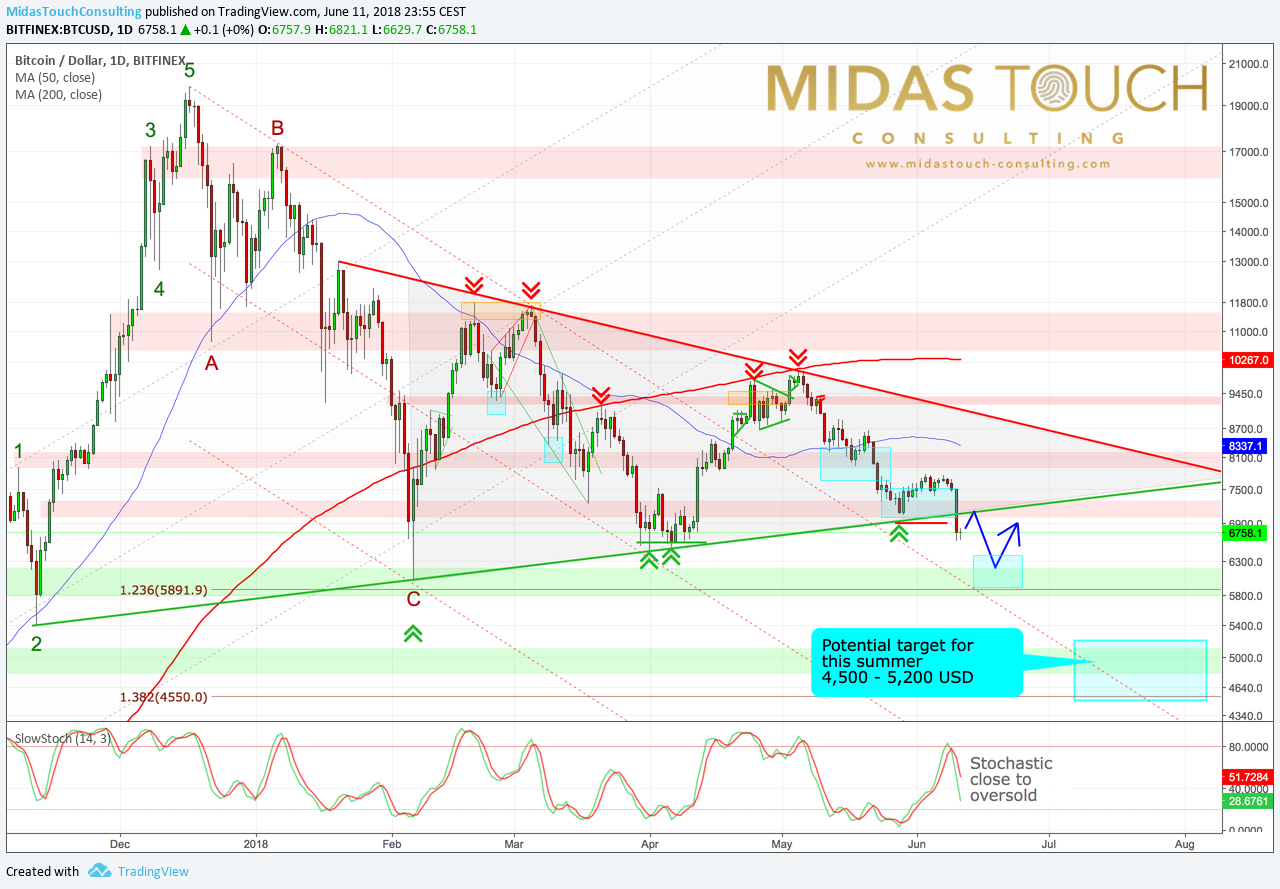 One potential and final target for this “crypto winter” sits around $4,700 – 5.200 USD. But judging from the high levels of pessimism, chances are pretty good that this crypto winter won´t last forever.

In fact, blockchain technology and crypto currencies are here to stay and will become a normal part of our day to day life. In my humble opinion it is therefore just a question of time until the next leg up for the crypto sector is going to start. This next wave should push the adaption of crypto currencies to around 10% among people on our planet. Bitcoin remains the most important crypto currency and is unlikely to disappear anytime soon.

One of the main reason to be bullish mid- to longer-term is the fact, that many institutional investors are lining up to invest into cryptocurrencies and blockchain technology. Just over the last couple of weeks once again news have made it clear, that Wallstreet & Co are looking for ways to get into this most exciting technology of our times. According to Business Insider for example, multi-trillion-dollar asset manager Fidelity Investments is building a cryptocurrency exchange. As well Susquehanna, one of the largest privately held financial institutions in the world, has reportedly made its big entry into the cryptocurrency sector. Other established Wall Street players are also moving into crypto. Goldman Sachs has a team dedicated to working on trading operations tied to crypto, and the New York Stock Exchange is reportedly building a crypto trading platform. Of course, other banks are remaining cautious as regulatory and security risks are still pretty high. But the entrance of major banks and financial institutions will certainly increase liquidity in crypto markets and especially in bitcoin. This should lead to higher bitcoin prices down the road. And many institutional players are going to accumulate cryptocurrencies via OTC orders to hide their intentions from their competitors and of course to avoid influencing the market price.

More than 1,600 tokens to choose from

Currently, with a market cap of round about $295 Billion, which is spread over more than 1,623 currencies, it has become quite difficult to place your money on the right coin or token. Actually, there is so much fraud and opaque projects, investors might be better off sticking with the big established currencies like Bitcoin (BTC-USD), Ethereum (ETH-USD), Ripple (XRP-USD) or Lightcoin (LTC-USD). A classic alternative would be to screen conventional stock market for crypto related stocks and companies. Here traditional regulation by the authorities ensures due diligence and thorough reviews before a company can start trading.

One of those few promising blockchain stocks might be ATLAS CLOUD ENTERPRISES INC.(CSE:AKE) (XFRA:A49) (OTCPINK:ATLEF) (https://atlascloud.ca). Based in Vancouver, Atlas Cloud operates on a similar business model as HIVE Blockchain (HVBTF) and is positioned to become one of the premier cryptocurrency mining and technology operations in North America. Due to the direct access to the largest hydroelectric power station in the USA (Grand Coulee Dam in Washington State), Atlas Cloud plans to receive one of the cheapest electricity price for Bitcoin mining. Once the facility is running, Atlas Cloud will pay less than $0,03/kWh and should therefore have a significant advantage over its competitors.

The trading halt has kept Atlas from buying too high

The development of the company’s business to digital currency mining has been deemed a fundamental change under the policies of the Canadian Securities Exchange. As a result, the Company’s expansion of its business needs the approval of its shareholders and the Canadian Securities Exchange. Therefore, trading has been halted in Canada and Europe since early February already, but the stock is trading on the US OTC. This trading halt certainly has been a disappointing development initially, but as it looks now it might have been the best that could have happen to this young company. Back in December and January the hype around Blockchain was without a doubt tremendous and completely exaggerated! A lot of new money pulled into the tiny sector. Now a couple of months later the hype is gone and facility costs as well as machinery costs have dropped significantly. With $8,000,000 CAD in cash ready to be invested, Atlas Cloud is now in the comfortable position to capitalize on this and will be able to buy assets much cheaper. According to the company all necessary listing statements have been submitted to the Canadian Securities Exchange. Upon receiving conditional approval for its listing statement, Atlas Cloud shareholders will then receive a consent resolution from the company. If Atlas Cloud meets the requirements of the CSE Policy 8 (Fundamental Changes and Changes of Business), shareholder consent is expected for end of June and shares should be back to normal trading in early July probably.

Besides the ongoing trading halt, the IT service provider recently published an update on its operation and on the progress towards becoming the most cost-effective crypto miner in the blockchain and cryptocurrency mining industry. Atlas Cloud is currently undertaking bitcoin mining at the current co-location facility in Montana operated by one of its partners. The company previously announced a $3,000,000 CAD order of ASIC S9 miners. Atlas currently pays $0.10/kWh for those miners to deliver at a capacity of 13.5 petahashes per second (PH/s). That brings the productions cost to $3,890 USD/BTC and a mining output of ~0.85 BTC/day, assuming a 5% month-over-month increase in the mining difficulty rate. With this co-location facility Atlas Cloud has already accumulated more than 60 BTC, which are safely stored in their wallets. Atlas Cloud does not plan to sell those Bitcoins at current price levels.

At the same time the company is nearing completion on its Grant County Data Center (GCDC) in Washington State. The new wholly-owned 5-Megawatt facility has been fully funded at $3,000,000 CAD and will be dedicated to Bitcoin mining. Mechanical and electrical work should be complete by the second quarter of 2018, making the facility fully operational by early July 2018. Upon completion, the regional power utility will supply a transformer suited to the currently proposed electrical requirements. Here, Atlas Cloud will pay $0,03/kWh and calculates to mine roughly 1.44 BTC/day at a production cost of $1,394/BTC. With this low production cost the company will basically start printing money and has a significant margin of safety on their operation as Bitcoin prices currently trade above $6,700.

Atlas should be able to produce ~2.25 BTC/day

As well Atlas Cloud is looking quite closely at a number of potential new facility acquisitions. The plan is to add another 1,000 miners with $0.025 electricity cost and a revenue for end of year at ~$4.7M, which should add another operating profit of ~$3.4MM. The goal is a run rate of $600k revenue per month at year end and $475k operating profit run rate at year end.

Based on fundamentals Atlas could rise 133%

Technically the stock is in a downtrend 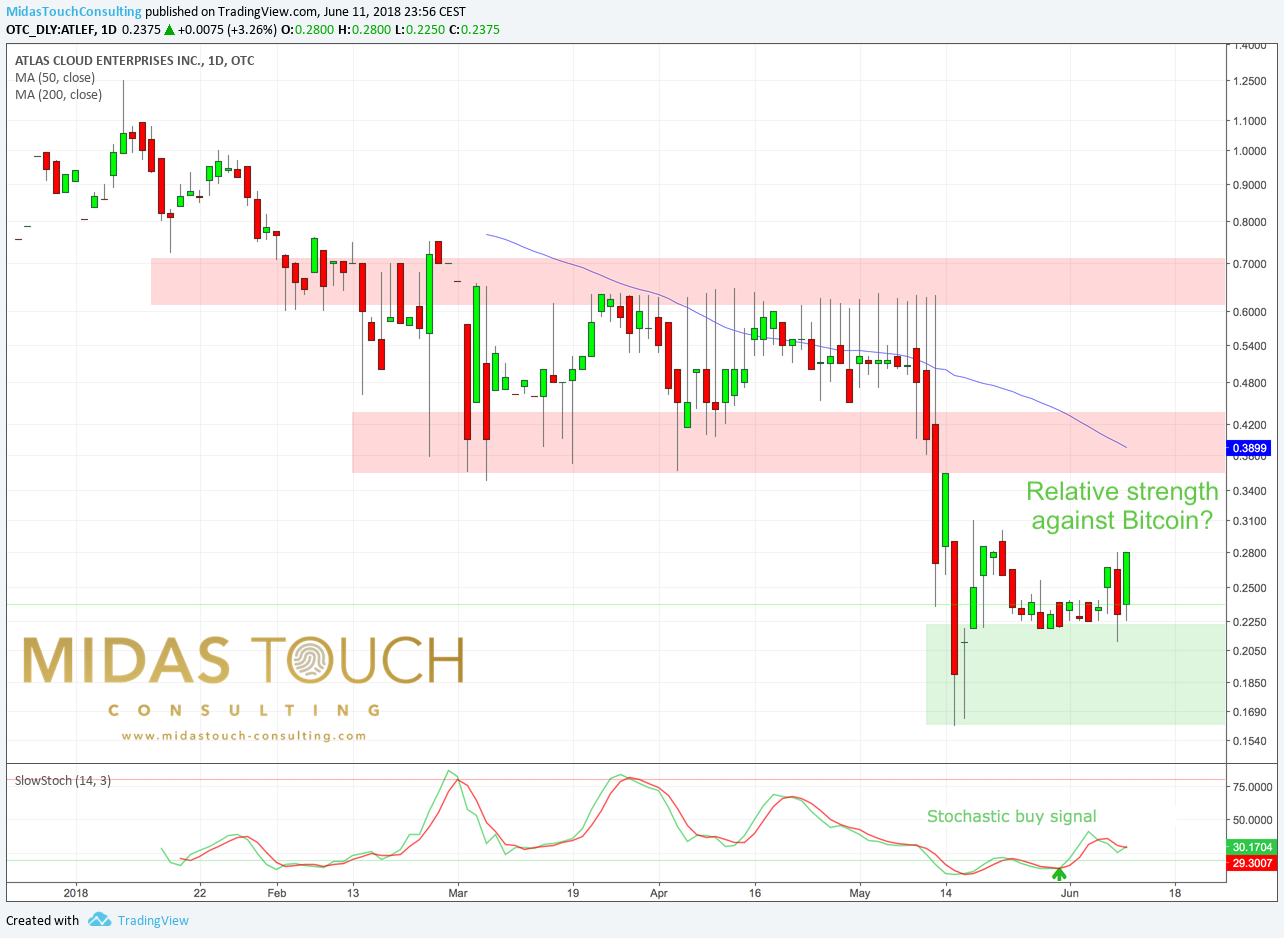 Looking at the chart in US-Dollar, the stock price itself is obviously beaten down and in an unpleasant correction. But the daily chart has been very oversold and started to recover. Over the last couple of week steh stock price is moving sideways. Everything depends on the end of the trading halt at this point. Once Atlas Cloud receives the conditional approval for its listing statement and shareholder consent, the stock should at least quickly move back to its former consolidation zone between $0.40 and $0.60.

A positive indication might be the recent relative strength against Bitcoin. While Bitcoin is down more than 13% over the last couple of days, Atlas Cloud has hold up rather well. I assume it won´t take too long until the market is realizing that Atlas Cloud is highly profitable mining bitcoins. And even if bitcoin´s correction continues, a target price of at least $0.60 USD or $0.77 CAD for Atlas Cloud doesn´t seem too optimistic for the coming six to ten months. But the first step is to reconquer the resistance zone around $0.40 USD.

In summary, Atlas needs to get listed in Europe and Canada again before the stock price can catch up. In my book, this should be just a question of time. In that case, with its business model, the two mining facilities as well as the extremely low production costs, Atlas Cloud then seems to be pretty well positioned, to become indeed one of the premier cryptocurrency mining operations in North America.

Of course, you need to believe that Bitcoin will stay here and that cryptos in general will continue their triumphal march sooner or later. Even though the crypto winter is not over yet, Atlas Cloud is an attractive longer-term play at current levels. But the stock is very speculative and should only accumulated into weakness and with sound money management. As a stopp-loss doesn’t make sense, your whole position is at risk and you therefore need to control your risk via proper position sizing.