Bitcoin surpassed another milestone trading well over 50k last week. Even the strongest doubters start joining in. All professionals have begun to take a bite, and we are far from speculating if this idea has merit. Now the question is how long will it hold steadfast under the attack of possible government coin inventions.

It isn’t easily replaced since it already has a history. New inventions might not become an immediately acceptable standard. After all, the large part is trust. We are always rushing to Gold and Silver because of its long historical trust established as a means of barter. With a world much more intertwined geographically, we need a third payment method to allow for large-distance transactions. Something Gold and Silver can not easily provide.

BTC-USD, Weekly Chart, When to get in: 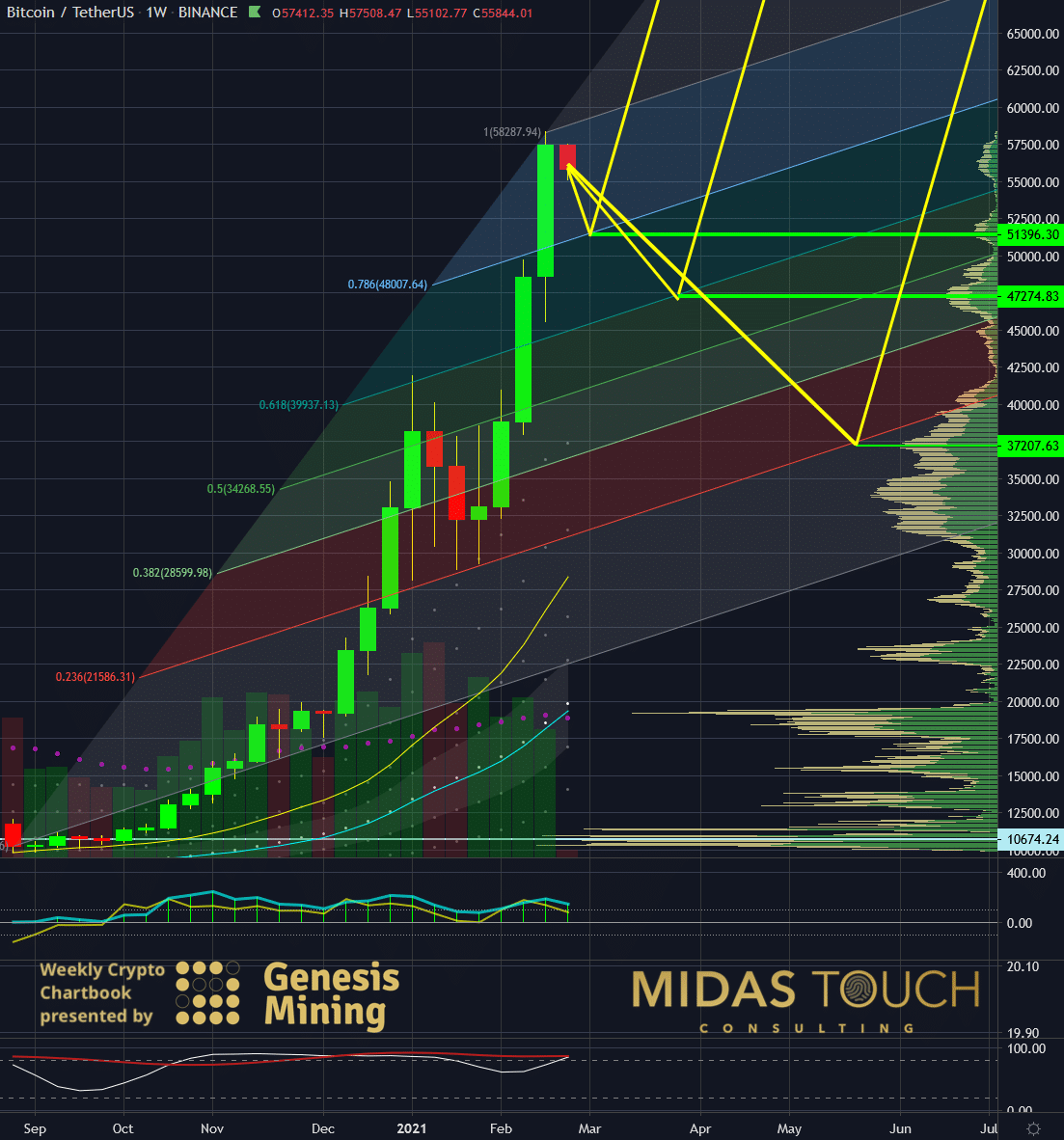 With bitcoin´s past volatility, it is safe to say we will find ourselves in a retracement in the not-to-distant future where entries near US$51,500 and at the levels below of US$47,500 and US$37,500 are entry zones to keep an eye on. No need to bet the farm but ignoring Bitcoin to wait for another round of next advances isn’t advisable.

BTC-USDT, Hourly Chart, Know when to get out: 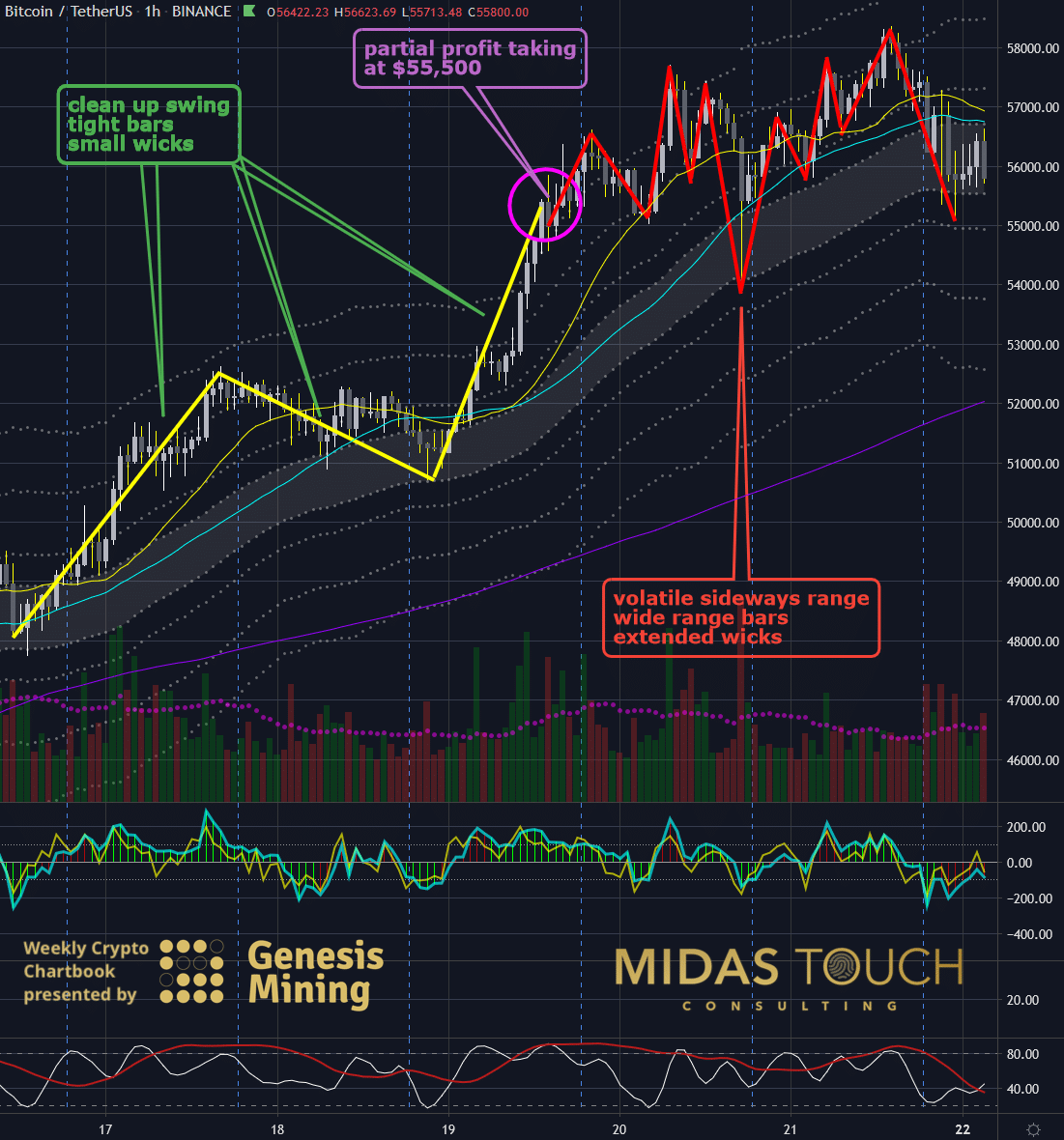 One can tell what type of money has entered the arena by the way price is advancing. When breakout trades in frequency dominate all other chart pattern formations, it is evident that less-educated funds entered the arena. Last Friday, we advised channel members in our free Telegram channel to take partial profits at US$55,500, a smart point of exit. Yes, prices did advance even higher to US$58,352, but we perceive markets not from maximizing profits but from a risk perspective. This chart shows how volatile noise came in right after these price levels and bears and bulls started their struggle. A time where one would want to be exposed with less position size and stay sidelining from an entry perspective. 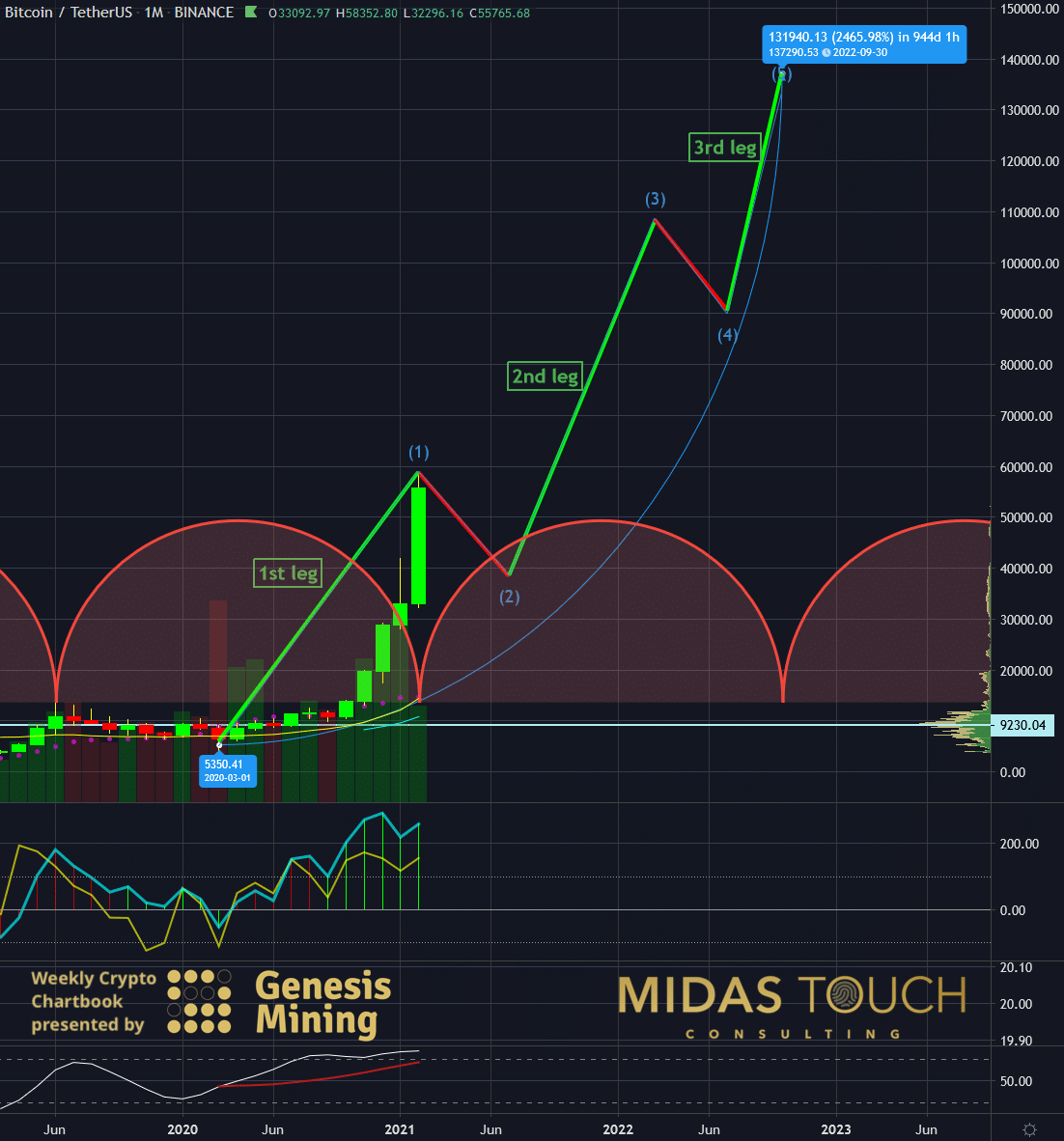 One might think that 58k is high. Especially looking back that Bitcoin at some point could be acquired for less than US$2. Those exposed for a more extended period to this investment vehicle, remember the fierce retracements of up to 80-90%. The future does not have to equal the past. With most of the money from a volume perspective not being allocated yet, we still find an immense potential for much higher price levels than Bitcoin trading right here. Yes, we might find ourselves in a steep retracement once this first bull wave is over. All this should be perceived is as an opportunity and not feared of Bitcoin going away. It won’t.

With second legs typically being much larger than the first and a three leg advancement being modest, we find our projections conservative.

In times where hyperinflation again destroys much that some hoped for and others worked for, by over-borrowing, the need for a barter method that can not be diluted, Bitcoin fits like a glove. Its mathematical standard of limitation to the number of twenty-one million allows for the trust given not to be disappointed. Like times where we had the gold standard, one can rely on its stability. It found its stable place alongside precious metals to be a safe haven and a way to continue doing business and measure one’s wealth against. Its mathematical beauty provides the safety and freedom needed to return to truthful value exchange.