One of the more conservative long-term investors, George Soros, recently took a bite into the crypto space. His fund is not the only one that also has started pulling out money, both from Chinese investments and general markets as a whole. At the same time, Brazil followed El Salvador’s example and is on its way to declaring Bitcoin legal tender. In short, a continuous stream of news keeps supporting the notion: Bitcoin has gone mainstream. In times of uncertainty and warning signs of a real estate bubble bursting, steps towards a wealth preservation investment policy are a logical consequence.

Another sign of strength is bitcoins performance. Since its high of US$2.075 in August 2020, gold has been down 15%. Silver, another wealth preservation choice for investors, took a hit in the same period of 23%.

Let us have a look at how bitcoin is fairing:

Within the same time span, bitcoin moved up over 400%. Comparing data like this can be eye-opening. Typically, when viewing your statements or charts, your review is based on “year to date” or alike – a set time frame (weekly, monthly, annually). We find an event-based comparison, in this case, the covid pandemic of actual value. What can be argued is that while typical wealth preservation havens like precious metals performed poorly in a time of crisis, bitcoin soared. 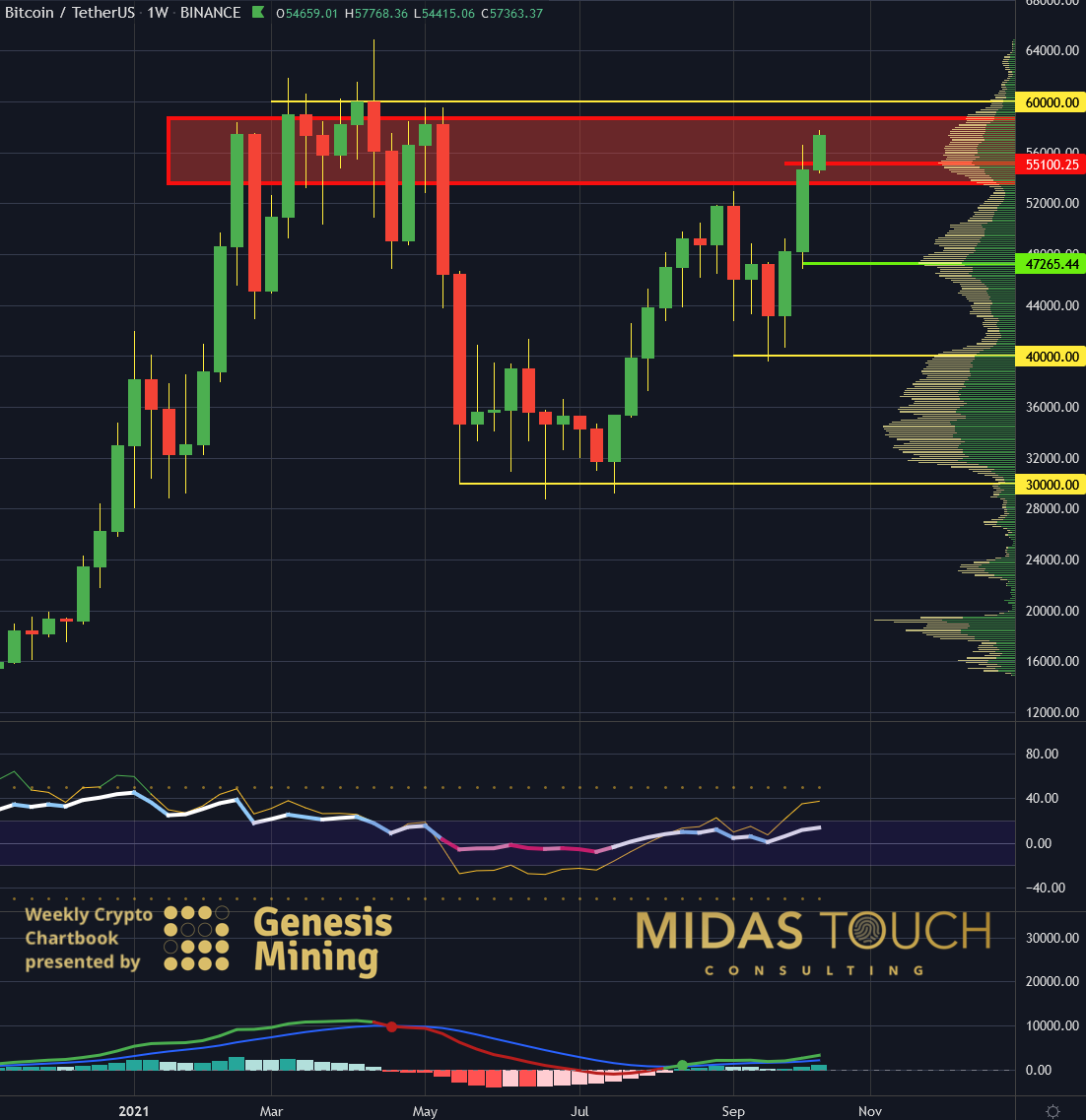 A weekly chart of bitcoin depicts price heading towards a wide double top near the US$ 60,000 region. Right now, price struggles through a distribution zone (red box). It would come as no surprise if a turn were already initiated at these lower levels. What speaks for strength, however, is that POC (point of control) at US$ 55,100 has already been surpassed. It is not likely, nevertheless, that prices will pass through US$ 60,000 without a struggle. If you look at the horizontal yellow lines, you can make out that bitcoin respects round numbers. 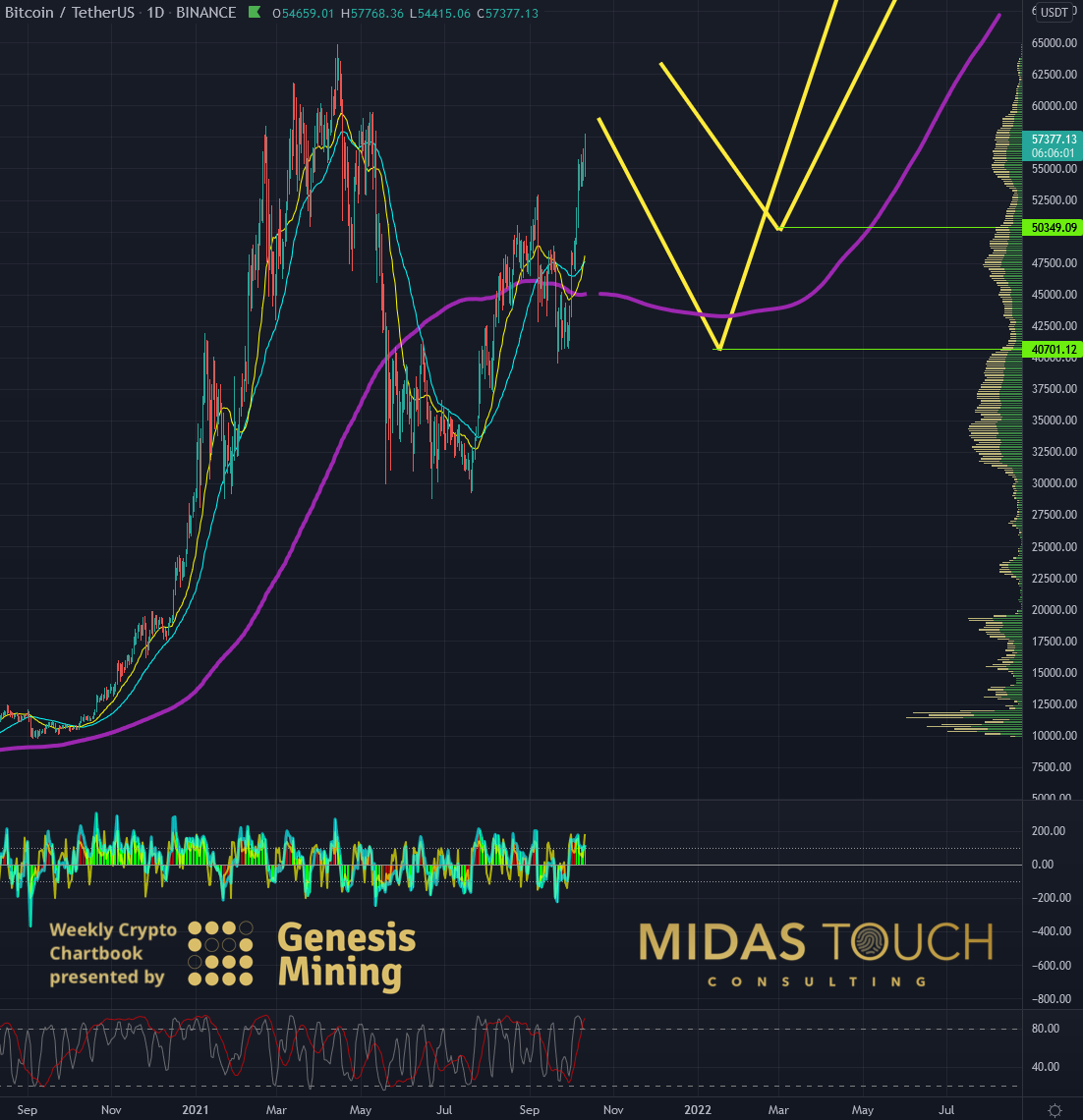 While conservative with more significant commitments to long-term entries right now, we wanted to share the scenarios for shorter-term plays in the daily chart above. We speculate that markets might get undone quickly over the next few months (see our last week’s publication). And as such, we find long-term entries here to be more risky than usual. The yellow lines project retracements from price levels are slightly below and slightly above the US$ 60,000 zones. They might find low-risk long entries near the green horizontal lines.

It is unquestioned that by now, bitcoin has found itself been traded by all the various groups of market speculators, from individuals to governments and anybody in between. It is simply too attractive from both a fundamental perspective and in its performance. That being said, there is still a vast number of doubters, and as much as it has gone mainstream, there is a large pool of market participants who are not yet invested. With a limitation of 21 million coins, this means there is a vast potential still in price rise. With this in mind, we prefer not to shy away from possibly intimidating price levels for participation, but rather aggressively keep accumulating coins in a low-risk fashion.