Bitcoin is an equal wealth preserver to gold

Gold has more than four thousand-year history to prove its stability as a safe haven in rough times. And yet, Bitcoin, only around for a bit over a decade, does not need to keep its head low. It might even outperform its historical Goliath in usefulness at times of crisis once we look underneath the hood and compare the two from various angles. Bitcoin is an equal wealth preserver to gold.

At a closer look:

Now that we have established bitcoins validity to measure up to the big boys, let us look at its desirability from a chart perspective in regard to acquisition timing. 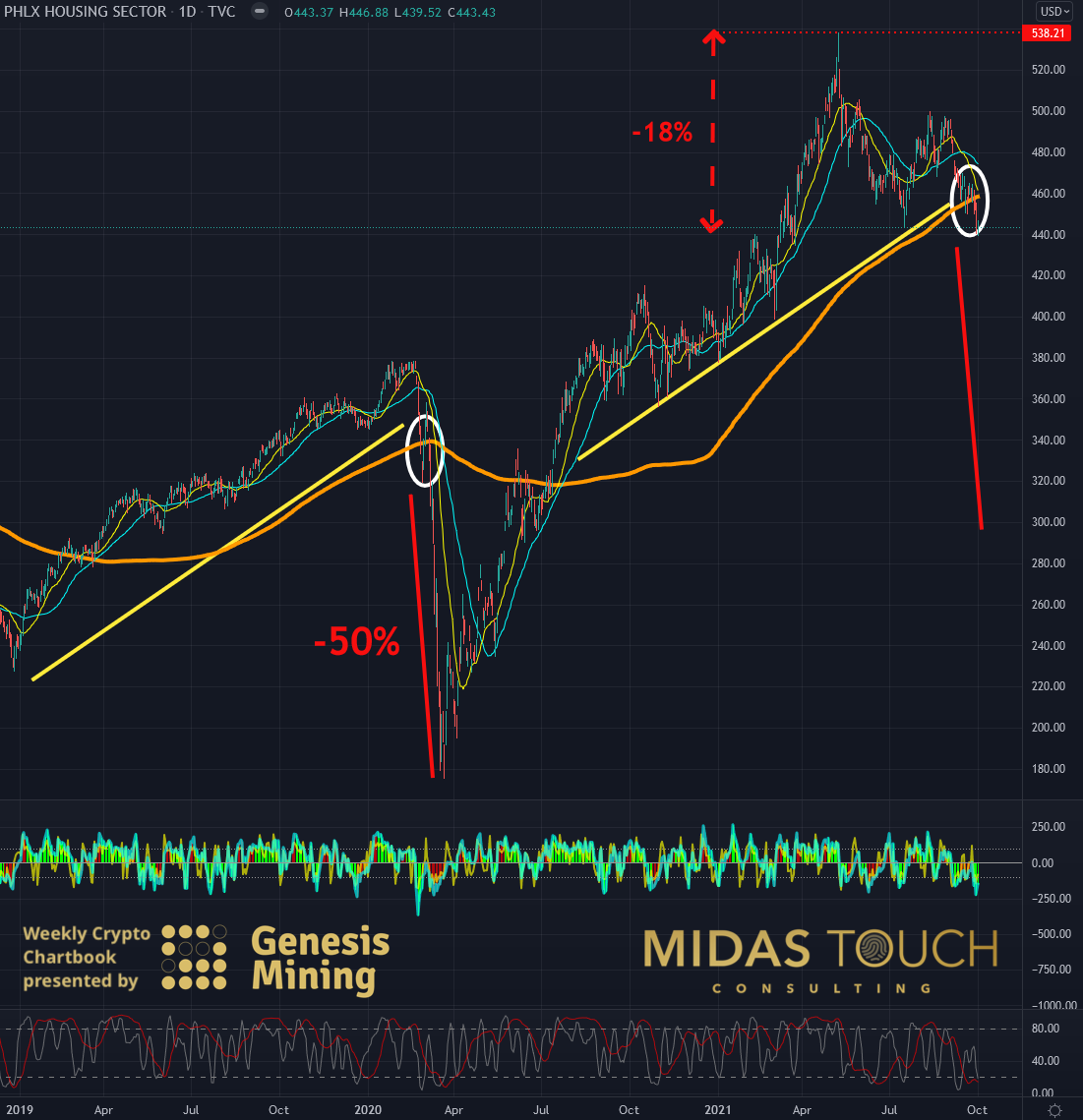 With China’s real estate bubble in bloom and markets intertwined throughout the globe, early warning signals also start to show in the US. The daily chart above of the HGX (Housing Sector Index) gives such an indication clearly. We see a similar picture of a previous swift decline (-50%) setting up at the 200 moving average (orange line) right now. The index, composed of companies whose primary lines of business are directly associated with the U.S. housing construction market, already lost more than 18% from its recent top last May.

Gold in US-Dollar, Monthly Chart, Everything is possible: 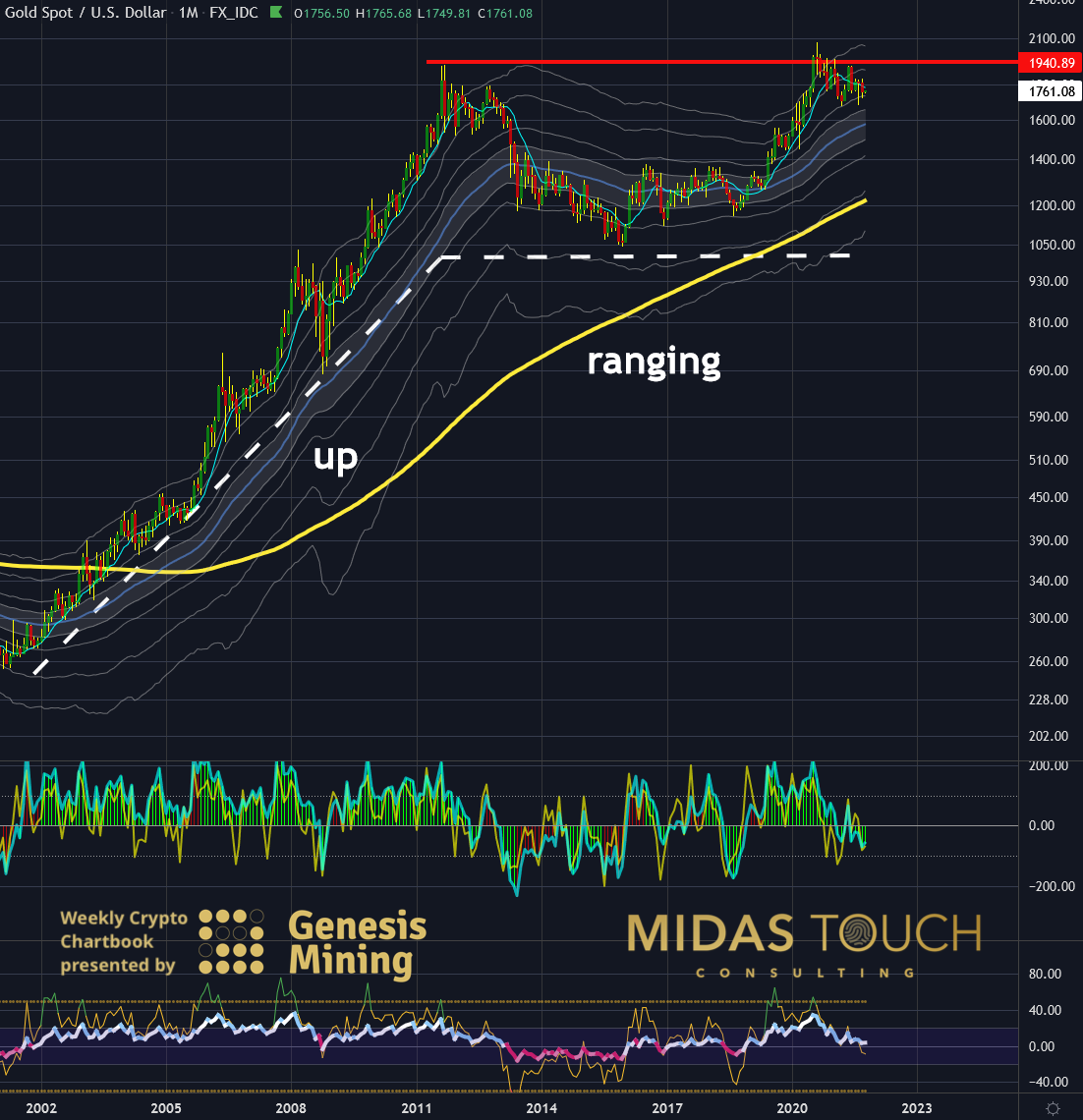 Most of the time, real estate is the first turning point for the market to come undone. Closely followed by the Russel 2000, then the S&P500, Dow, and Nasdaq 100. Precious metals are not spared since money is needed to pay for margin calls. All asset classes get in motion, and so will Bitcoin; rather sooner than later, since “exotics” typically are cannon fodder. No worries, though; it will be in turn also in the early recovery field alongside precious metals.

A look at a monthly gold chart shows a ten-year bullish uptrend followed by a ten-year wide sideways range. Consequently, we are left with two likely scenarios. A trend continuation initiated by a breakout to new highs. And equally a possibility after the wide double top built in August last year that prices decline further down. This especially if Gold comes under pressure of an altogether market crash.

BTC in US-Dollar, Weekly Chart, Bitcoin is an equal wealth preserver to gold: 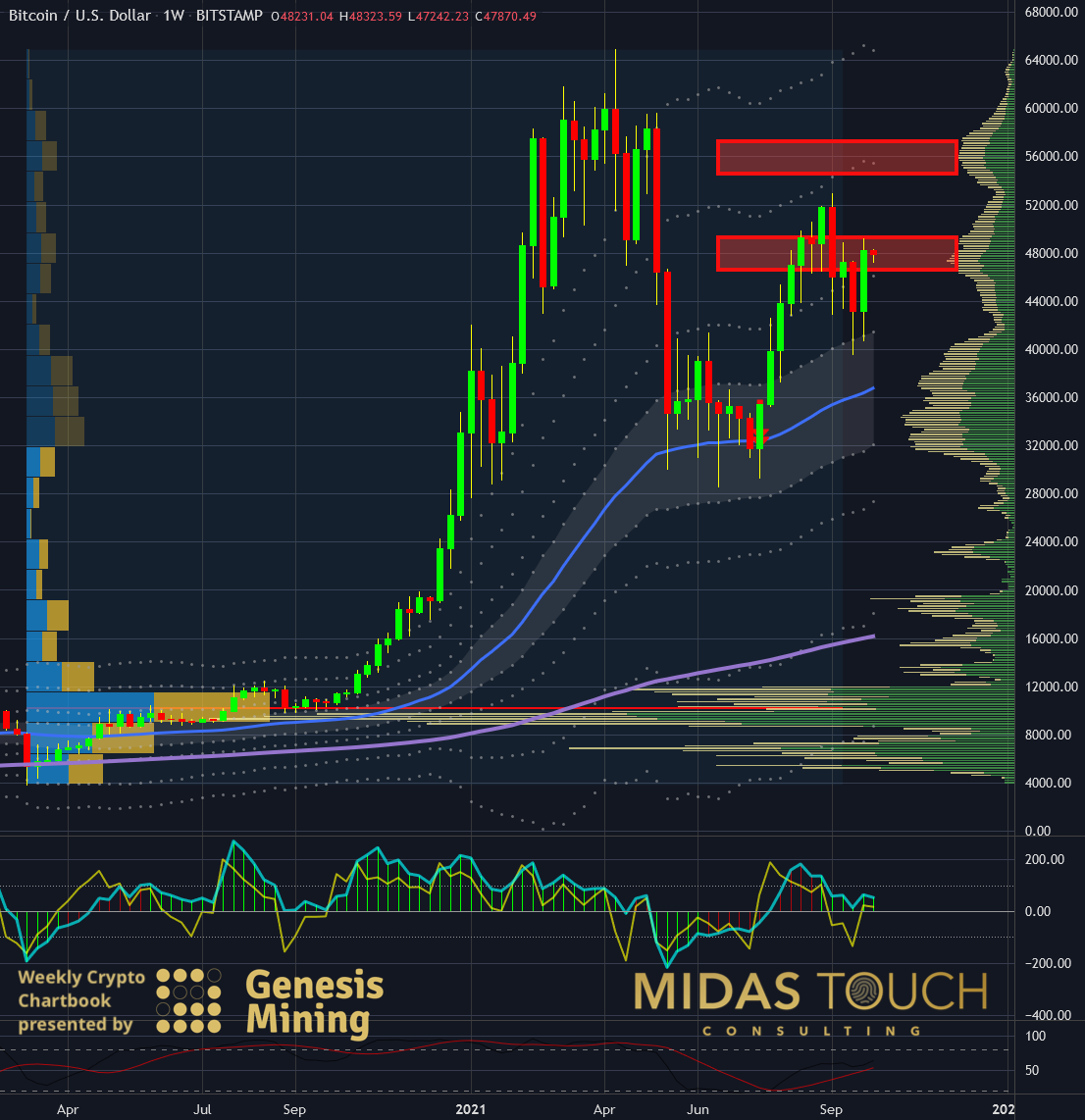 China isn’t just the forefront threat regarding real estate but also an insight into how strong regulation of a market, in this case, bitcoin, can have detrimental effects on a market already in a retracement. It is likely that the crypto space and bitcoin will see a second wave of regulatory attacks in the US.

The weekly bitcoin chart illustrates that price is stuck in a distribution zone, with a second resistance zone right above (red squares). We find these price levels less attractive from a market low-risk entry perspective. Consequently, we see a more attractive entry point once the market has shown its hand. Now is the time to keep the powder dry and act sensibly after the possible storm shows first signs of clearing skies.

Bitcoin is an equal wealth preserver to gold:

Evolution churns slowly, and gold outperforms bitcoin by far when it comes to established history. But as much as change might come slowly to human behavior, it is yet a fact that once fuel injection was outperforming carburetors, that sooner or later, everyone wants the better performing car. What we did not mention yet is bitcoins advantage over gold in the aspect of decentralization—a new element to money that could come to the forefront of importance faster than assumed just yet.