June 9th 2020, Crypto Chartbook: If it breaks we get paid

If it breaks we get paid

Or not. One aspect rarely talked about is the psychological aspect on why there are so few winning traders. You might have heard about the trader who reached his goal to make a million dollars and  then lost most of it. Once the strongly desired goal was reached the underlying psychological belief to not be worthy of the money set in. Consequently causing self sabotage trading. Another well known example was one of the largest bond traders giving back each Friday of each week almost 40% of his huge weekly profits. Likewise for reasons of guilt having extracted that much money from his colleges in the pit. Everybody thinks these kind of subconscious unworthy patterns would never happen to them. Wrong! If it breaks we get paid.

That is true in theory. When 10k in Bitcoin will no longer hold as a resistance, the accumulated runners (see our quad exit strategy) we posted live in our free Telegram channel, have the potential for quite some substantial additional profits. This only if not prematurely exited based on underlying scarcity thinking or a lack of self worth.

BTC-USDT, Daily Chart, If It Breaks We Get Paid: 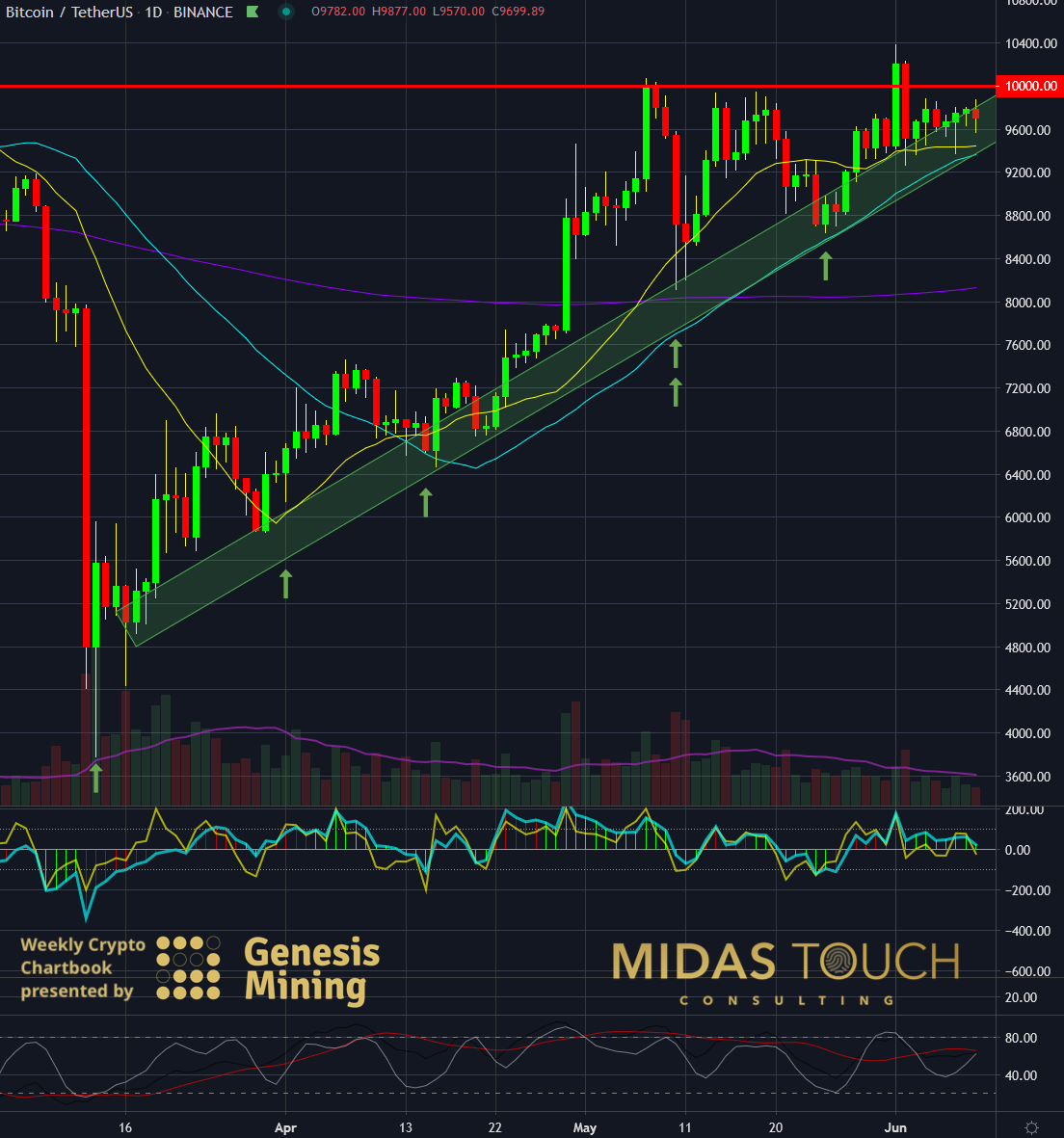 The 10k on Bitcoin will break! Actually it is just a matter of time. And then we get paid because we are holding six runner positions. How did we get there? Via the quad exit strategy!

Bitcoin loves trading  in clean channels. Therefore directional support as indicated in the chart above, should be predominately used versus horizontal support/resistances lines. Horizontal support is where the world has their focus on, but it isn’t price that needs to be watched, it is direction.

BTC-USDT, Monthly Chart, You Need To Be Prepared: 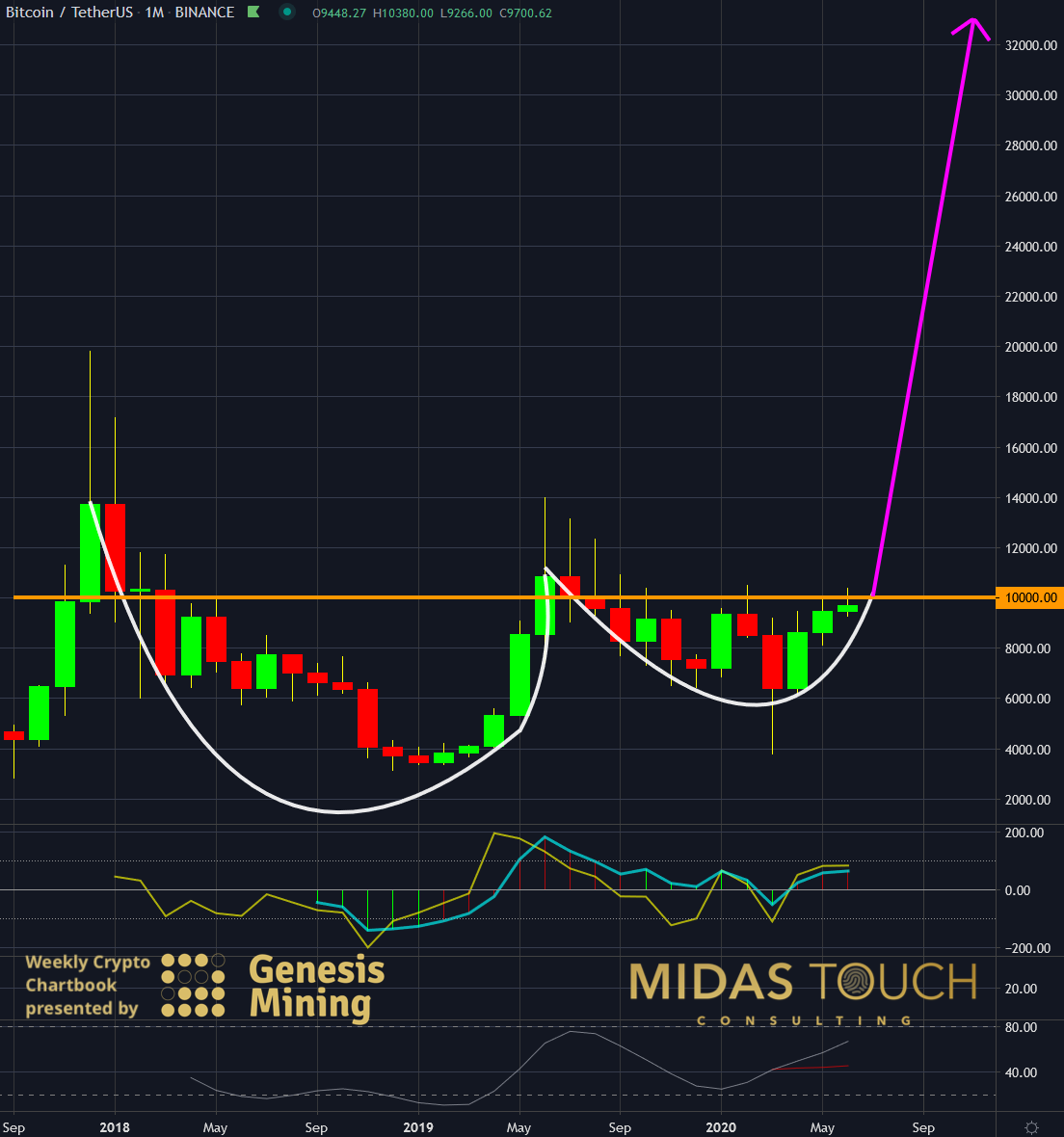 One can interpret the monthly chart as a couple and handle formation which is known to see major moves after completion. Even if you doubt that specific chart pattern, looking historically back on Bitcoin, it is clear that once a move is on its way it quickly can be in the higher triple digit percentage performances already within weeks. You need to be prepared in detail about your exit strategy and even more feeling worthy internally to hold on to such longer term advances and exit correctly. 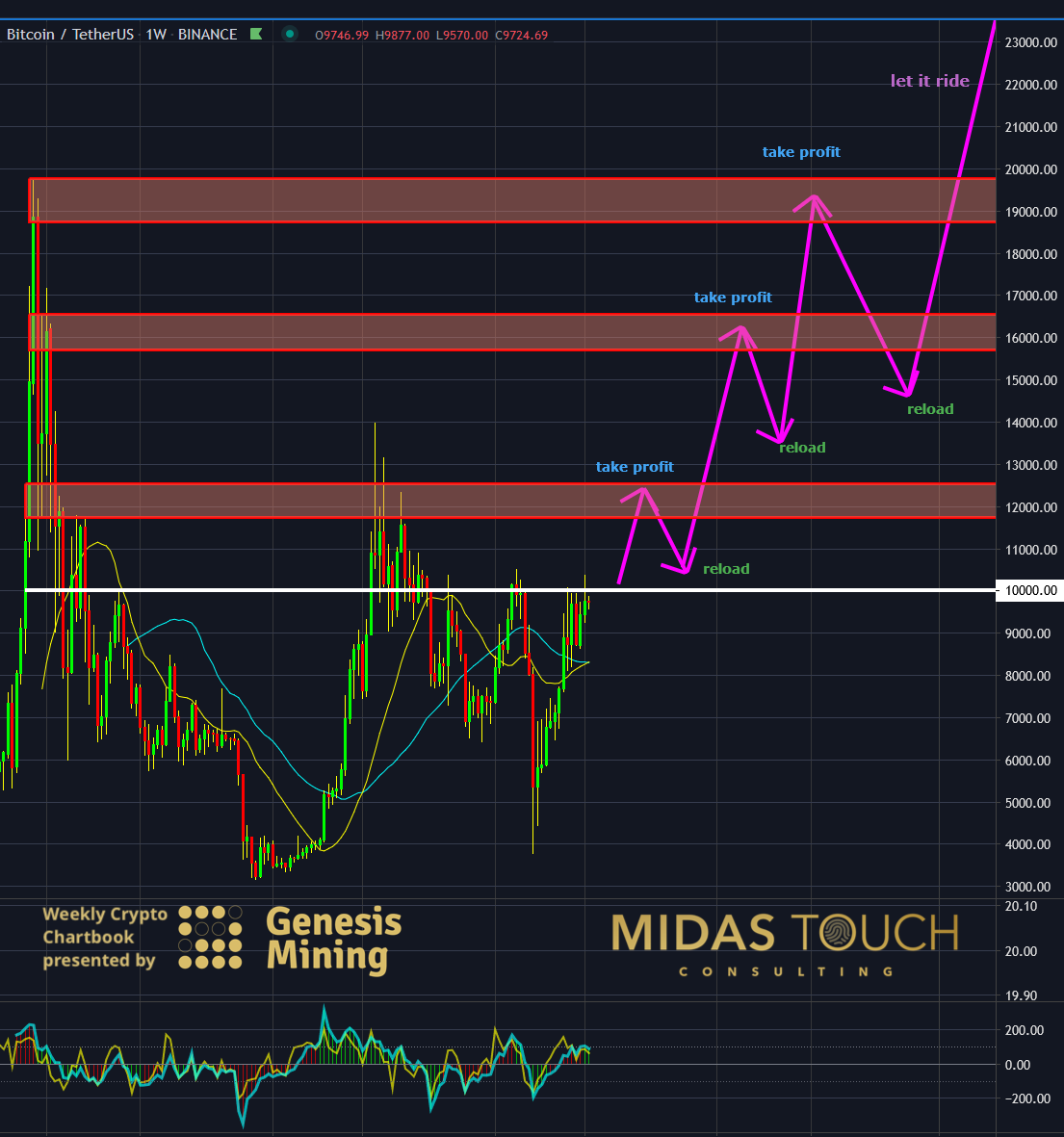 The weekly chart shows that we could easily get another retracement. Or a substantial sideways phase near 10k before we advance higher. We are in a highly news driven environment right now and as such need to be prepared for any possibility. Therefore, plan your exits in detail and in advance. Imagine these exits to be already reached and how that would make you feel.

In our case, we aim to take some target exit with half of our runners exposed and then reload on the retracements. Some of the exposed capital we aim to hold for a long period to come as long as the trend is intact.

If it breaks we get paid

The constant self reflection necessary as an investor/trader is extremely uncomfortable for most. Unfortunately, it is absolutely essential for true success. One fact substantiating this principle is the overwhelming percentage of over 70% of lottery winners ending up bankrupt within just a few years of having received a large sum of money. Money in itself is just a neutral energy source that magnifies one´s behavior. If that behavior hasn’t naturally grown along with the inflow of this energy source it can have devastating results. We tend to put off the bigger picture and focus on system development like entry and exit timing. However not realizing the unresolved conflicts in the bigger picture are the culprits. That is why we violate our own rules and make execution impossible.

If there should be long term frustration accumulated of one´s own rules violated consistently or overall consistent losses, it might be smart to temporarily take a break. Just like CD’s for fiat currencies there are ways to participate long term in the crypto currency space without growing more grey hair. Owning a DASH masternode for example and collecting monthly payouts. Or allocating funds to a mining company. This isn’t solving the psychological hurdle per se but certainly flattens the growth curve of required introspection. It allows for more time to work on inner issues.