Let’s pause right here after this headline. If something has a potentiality like this, wouldn’t you want a foot in the door, even just speculative with a small amount at least? Undoubtedly, we have proven 90-year cycles that there are different world powers who alternate between the leadership position of holding the reference currency. China might be the world’s economic power of the future. They are working on a cryptocurrency right now with more success than most competitors. Even if you estimate a slim probability for today’s headline to manifest, you do not want to be surprised by such a prospect and maybe even hold a speculative position of Bitcoin just in case. Bitcoin, World Reserve Currency. 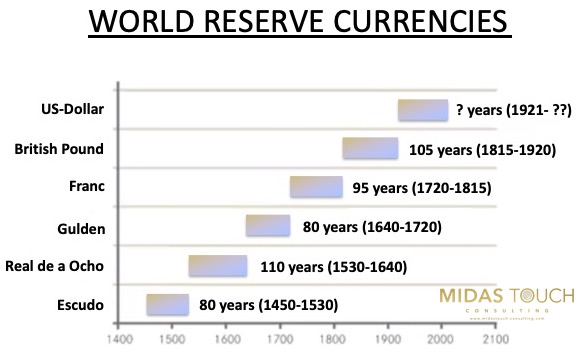 Think of it this way. The most crucial factor for any investment is its risk. The second most vital factor is potential. We can extrapolate a risk/reward-ratio from these two factors that most traders seek to evaluate if a trade is worth taking. With technical analysis as a supportive tool, risk can be assessed relatively easy but where guessing gets more challenging is the actual potential of Bitcoin and its target price.

How realistic and probable is the likelihood of Bitcoin dominating the store of value market competing with Gold and fiat currencies, real estate, and bonds?

Well, ten years ago, Bitcoin was geeky and held in a community of idealists. Now it is worth one trillion dollars in the store of value concept. That leaves room for a factor of 100 or more multiplied by today’s Bitcoin price as a potential target. So far, Bitcoin was able to rise from a few bucks to nearly US$65,000.

Recently institutions have started buying into these investment vehicles. Consequently, confirming that after more than ten years, Bitcoin´s geek times are over. Now imagine the possibility that governments would begin backing their currencies not just by Gold but also by Bitcoin. Then, we could easily see a Bitcoin expansion on a much larger scale. Institutions just wet their beaks, and with a final wave of individual investors likely, we see quite a potential to a bet on Bitcoin that is supported both from a fundamental perspective as well as from the technical side. 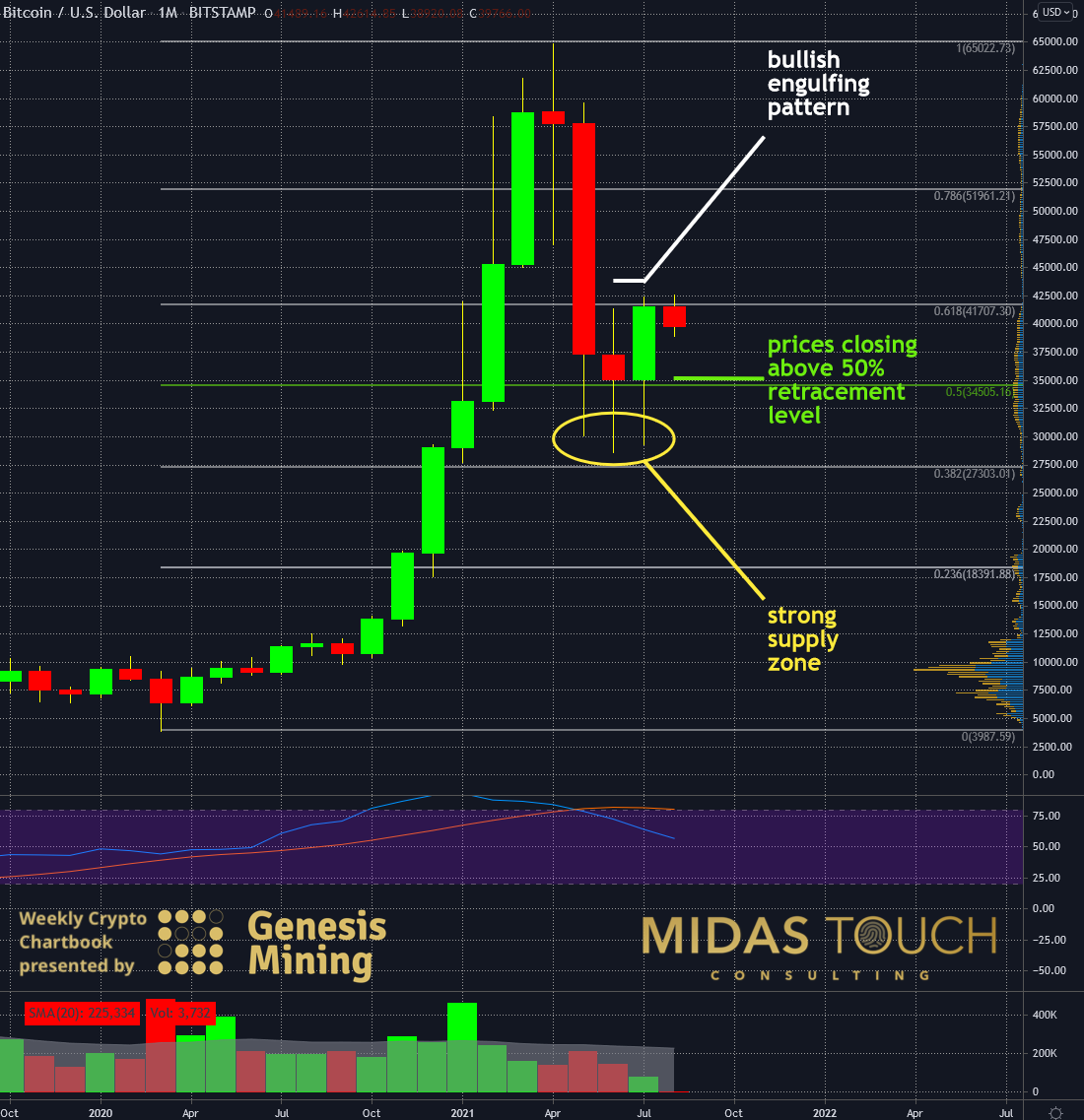 A look at the dominant monthly chart clarifies that Bitcoin is possibly on its way to initiate its second leg up from a large time frame perspective.

Bitcoin had a stunning first leg up from March last year. In April this year, the advance slowed, followed by a steep decline in May. Nevertheless, prices closed above the 50% retracement Fibonacci level. June was a month of uncertainty and resulted in a small sideways bar. In July, bulls gained dominance again and formed a bullish engulfing pattern. Anybody who sold Bitcoin short in June is now holding a losing position! Prices as a whole, when trying to push below the 50% retracement level, got rejected, as seen by the extended candle wicks to the downside. So far, prices got halted at the 0.618 Fibonacci retracement level. Probabilities speak slightly in favor of a continued up-move versus a bear dominance for August.

BTC-USD, Weekly Chart, Neutral to up: 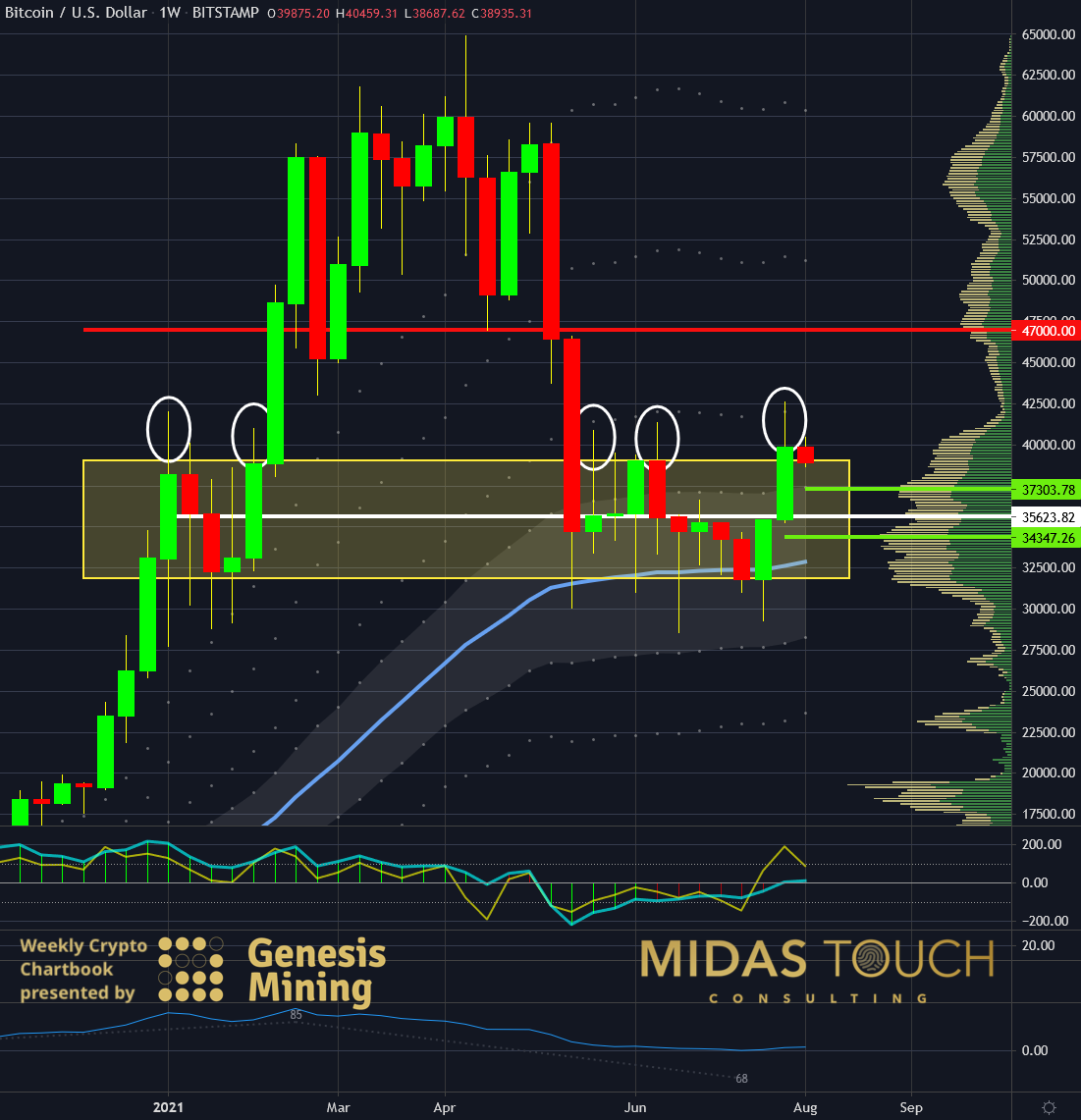 The view of the weekly Bitcoin chart is a bit more neutral. While bears certainly were stunned that in less than two weeks, Bitcoin impressed with a forty-five percent advance from US$29,296 to US$42,614, their typical push of price below US$40,000 was successful again (see white circles).  Price is now trading at the upper rim of the core range (yellow box).

What seems to attract the price like a magnet is the price level of US$35,623 (see open and closing prices near this white horizontal line). Fractal volume supply support zones for low-risk entries are US$37,300 and US$34,340. With the next distribution zone resistance near US$47,000, these short-term plays have good risk/reward-ratios. 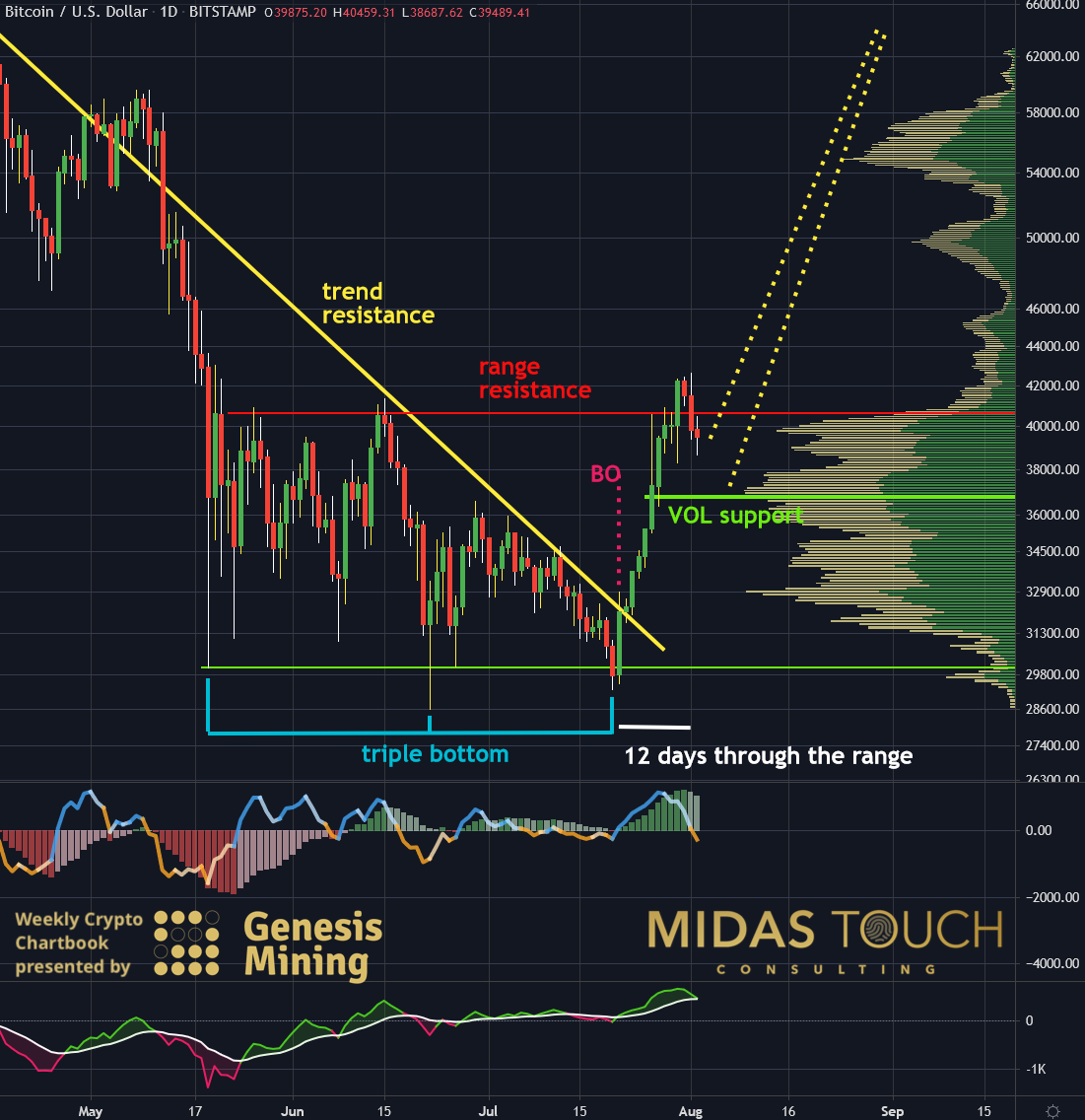 The daily chart confirms that we are in an entry zone worth devouring for possible low-risk entries for reloads. After a triple bottom, prices reversed in V-formation strongly followed by a breakout through a directional trend resistance line.

What proves a non-typical move through the entire range is the speed of only 12 days and the overshoot through the range top resistance line. Now fractal volume support provides for good support below the price. We anticipate another push to the upside, starting between approx. US$37,000 and US$39,000.

The key here is psychology and size, which means if you had some entries near the low of the range, with profits taken and runners remaining (see our previous Bitcoin chartbook), then reloading here with a small size is just fine. After all, you are already playing with the market’s money. If you missed the first 45% move and are struggling with”fear of missing out” emotions, these higher-risk trades are not for you since Bitcoin is known to retrace much more before a second significant move.

We often receive questions on how high Bitcoin might go. “what’s your target”?
Here are a few principle-based answers.

In short, Bitcoin looks to us like an iceberg. Little is obvious above sea level, and immense potential submerged below. With risks calculable and potentially enormous, we find ourselves in a win-win situation. With the use of our quad exit strategy, one can minimize risk and possibly eliminate it shortly after entry (exiting with 50% position size for small profits). Half of the remaining position size we target near six-figure numbers. If today’s headline should become true, one doesn’t need to worry about where to exit the rest. Why? The original investment most likely has grown by a factor of a hundred and is your new currency to purchase things.