After an epic rise during 2017 and a parabolic spike in December Bitcoin prices are crashing!

I called for a high probability low between 7,880 and 8,580 USD and my signal from last Friday was good for a 1,400 USD bounce but as we all know bulls couldn’t defend those short-term gains and Bitcoin just kept falling again. It seems that nobody wants to buy into this falling knife and anybody who tried already regrets it.

Of course witnessing such a blood bath many traders and investors are losing control of their emotions and start panicking. Personally I have never witnessed such a pessimistic sentiment! And from my experience in stocks and precious metals this is “normally” the perfect setup for a short-term bottom and a bounce or even a trend change and a new rally. But so far there are no convincing signals for an immediate trend change… 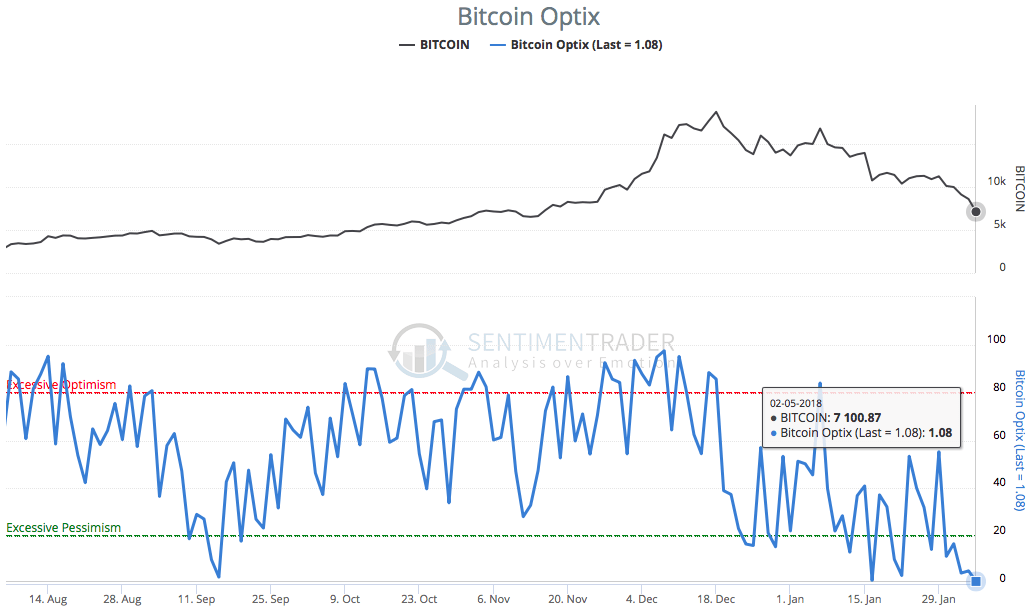 The latest numbers from sentiment trader are at extremely low levels. Combining this data with the mood in my personal environment and the mainstream media coverage (“front page indicator”) Bitcoin and all the other cryptocurrencies experiencing an extremely pessimistic sentiment. There is certainly blood in the streets with a famous crypto advocate even sheding tears in a public youtube interview… So sentiment wise it can’t get even lower – at least not in the short-term… 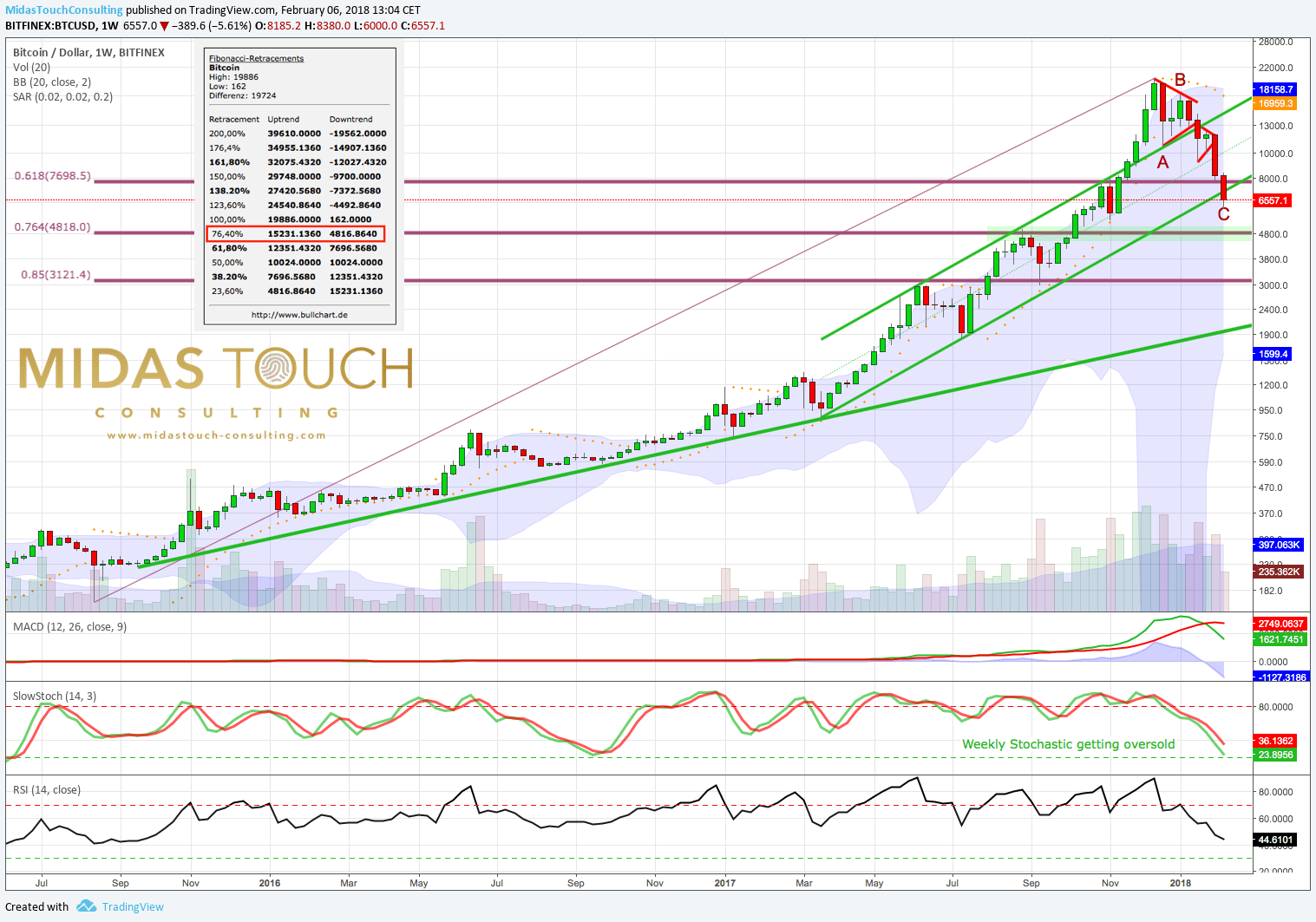 In such a highly charged situation it´s always good to return to the bigger picture.

Here on the weekly chart the general uptrend  is still intact. Basically Bitcoin is just back where it was last autumn…

But if you take the whole rally starting at 162 USD in autumn 2015 up to the recent high around 19,886 USD in December 2017 and apply the usual fibonacci retracement levels the zone around 7,568 USD becomes the 61.8% retracement. This zone has been lost on Monday without any significant reaction by the bulls.

Therefore we have to look at the next lower retracement level which will be the 76.4% around 4,818 USD. This level coincides with Bitcoins high at 5,000 USD last September.. Therefore technically it is very likely that Bitcoin will continue to fall towards around 4,500 – 5,000 USD over the coming weeks maybe months.

This price target is also confirmed by the fact that Bitcoin has broken below its green uptrend channel of the last 11 months. Even though it is currently fighting to get back into it down the road it is more likely that this channel will become history meaning obsolete.

If all hell breaks loose the final “worst case” destination for this correction could be another and even stronger uptrend-line currently around 1,900 USD but rising every week. This coincides with the lower bollinger band (1,584 USD) on the weekly chart which still has to play catch up with current market levels.

Just looking at the big picture I assume the absolute worst case scenario would be sitting around 2,000 USD. Yet much more likely is a final low around 5,000 USD. 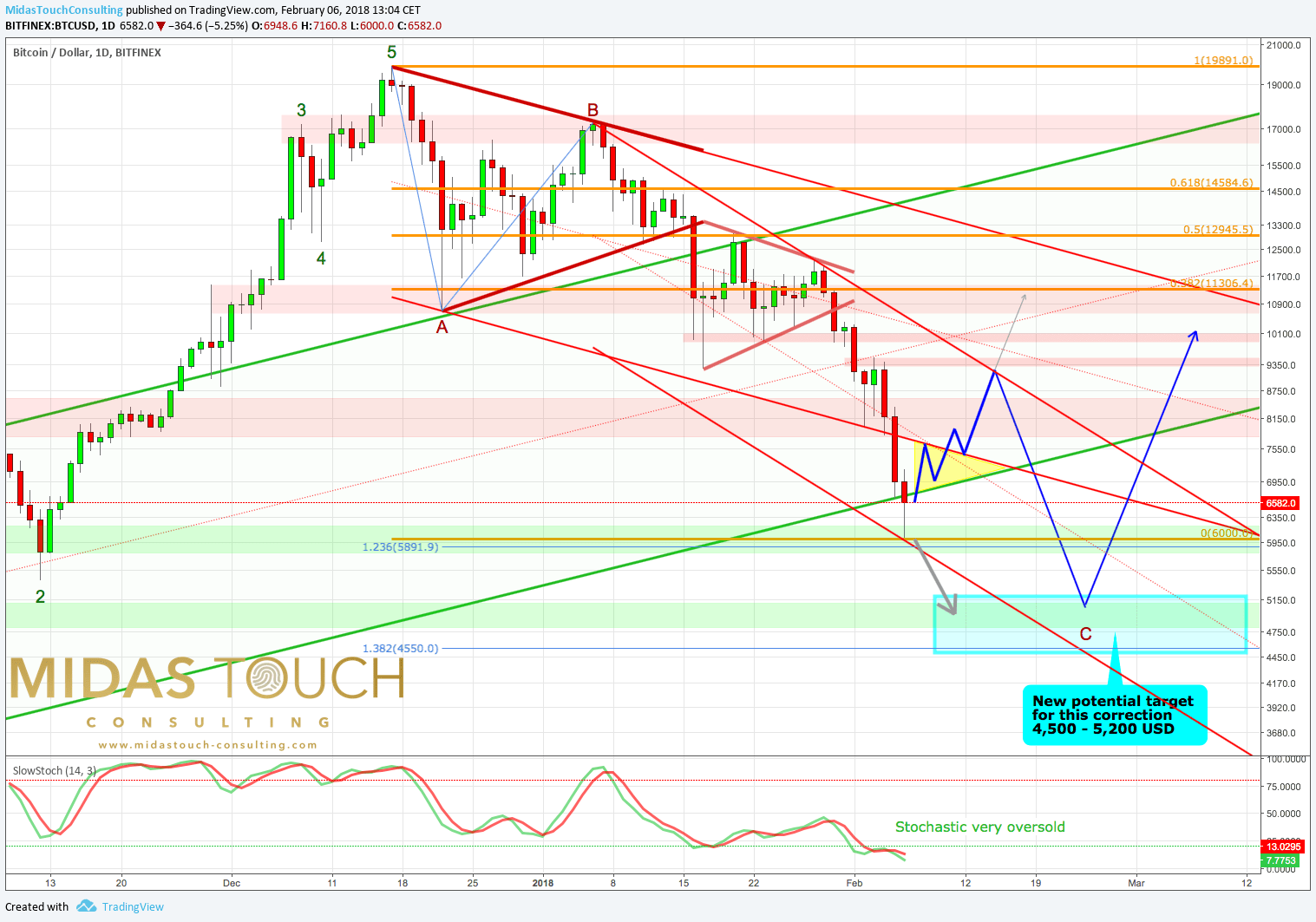 On the daily chart Bitcoin has been crashing through the recently established downtrend channel and is now moving within an even sharper downtrend channel (both in red)! None of the support zones has held so far.

The only remaining hope for the bulls is that Bitcoin can climb back into the old green uptrend channel. To make this improvement happen prices have to regain the 6,900 – 7,000 USD level. If this is not possible expect a waterfall continuation towards 4,500 – 5,000 USD. At 4,550 USD sits the 1.382% fibonacci projection from wave A and B down which is also working like a magnet.

But should Bitcoin indeed start a bounce due to the extremely oversold situation expect massive resistance around 7,800 – 8,000 and around 9,400 USD. A “dead cat” bounce could reach both targets but should finally bring the continuation of the downtrend. So if you are overexposed this would be a good opportunity to reduce your holdings to an amount that lets you sleep well and that makes hodling easier…

What can you do in such a situation? As long as you don’t speculate with credit, margin and leverage you can and should continue to hold I mean hodl your coins. There will be at least a strong recovery soon or later probably even the start of a new and massive up wave. But we a have to consider that the rally in the crypto space over the last 12 months was really way too extreme and therefore needs a very painful and deep correction..

But Bitcoin altcoins and blockchain are here to stay. They won’t go away even though governments central bankers will fight them. This new technology and the trend of decentralization are unstoppable. As well consider the fact that still very few people actually are invested in this small sector. A real bubble would see at least 10% of the population participating in it. Right now everybody talks about Bitcoin & crypto but only few are actually invested.

I continue to believe that soon or later Bitcoin and selected altcoins will rise to new all-time highs. But it could take time – at least a couple of months more likely one or two years. Short-term we should be very close to a bounce that will fail somewhere between 7,800 and 9,400 USD.

Disclaimer: I am personally holding Bitcoin therefore I am biased. Please do your own due diligence.