Sky is the limit

Since the invention of Bitcoin in 2009 a new fast and extremely disruptive crypto-universe has emerged. Currently, the whole sector has a total market cap of more than 179 billion USD – still very small but growing very fast.

By now it is very obvious that the year 2017 has been dominated by the cryptocurrency sector. While the price for one Bitcoin was moving around 1,000 USD at the beginning of this year, in the meantime one has to pay a whopping 6,200 USD for just one Bitcoin. Year to date Bitcoin is up more than 600%.

Yet many of the so-called altcoins, the alternative cryptocurrencies, did even top this outstanding performance. E.g. Ethereum exploded by a factor of 51 and Dash by a factor of 36. Inspired by the success of Bitcoin, already more than 1,230 listed, alternative cryptocurrencies are competing at the many different marketplaces all around the world. Only a few of them have a meaningful business model. Real economic applications are often missing. And of course in this fast-growing and unregulated crypto-universe fraud and rip-off are a constant companion.

Particularly exciting, however, is the fact that with the development of the blockchain technology obviously Pandora’s box has been opened, as many of these alternative cryptocurrencies are indeed competing together with bitcoin for the title “Best Free Market Money”. This development is still at the very beginning. It will bring many surprises, but also bitter disappointments. As the Internet did force the decentralization of knowledge and information upon the planet, the cryptocurrencies are now enforcing the next step in evolution with the decentralization of control and money. I am pretty sure that this is the next quantum leap for humanity.

Already this fast-growing jungle of coins, tokens, forks, etc. can no longer be overlooked. The dynamic young sector is breathtaking and extremely disruptive. It only seems certain that the vast majority of all those altcoins will disappear worthless soon or later. However, a few Altcoins have enormous potential and could even replace or surpass Bitcoin down the road.

In the following, I want to give you a comprehensive introduction and summary to four of the most promising Altcoins. 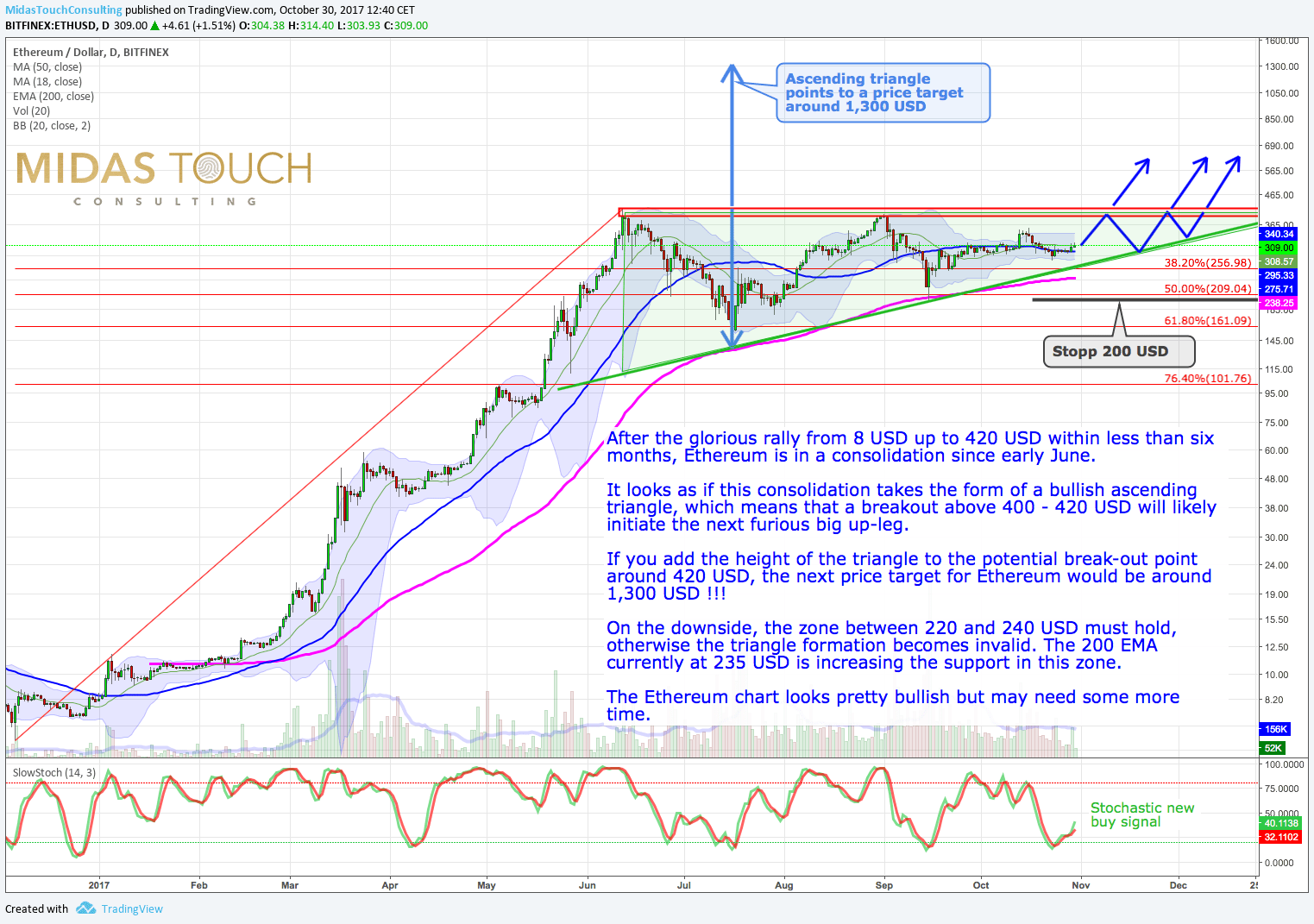 With a market cap of currently more than 29 billion USD, Ethereum, described by Vitali Buterin for the first time in 2014, has become the second largest cryptocurrency in 2017. The decentralized platform is managed by the non-profit Ethereum Foundation in Switzerland and offers the creation, administration and execution of so-called smart contracts through its own blockchain. Unlike Bitcoin, however, Ethereum is not a pure cryptocurrency but acts as a platform for a variety of applications within the framework of the smart contracts. These include e-voting systems, virtual organizations, identity management or crowdfunding, which would also enable for example automated license statements, emergency services and land register entries in the future.

After the huge price increase this year from 8 USD to nearly 420 USD, Ethereum has been in a consolidation since mid-July and seems to be moving into an ascending triangle. Thus, in the best case, the last counter-cyclical buying opportunity in the range of 250 USD might be still possible, while a breakout above 420 USD would trigger the next wave of buying and could push Ethereum towards 1,300 USD. 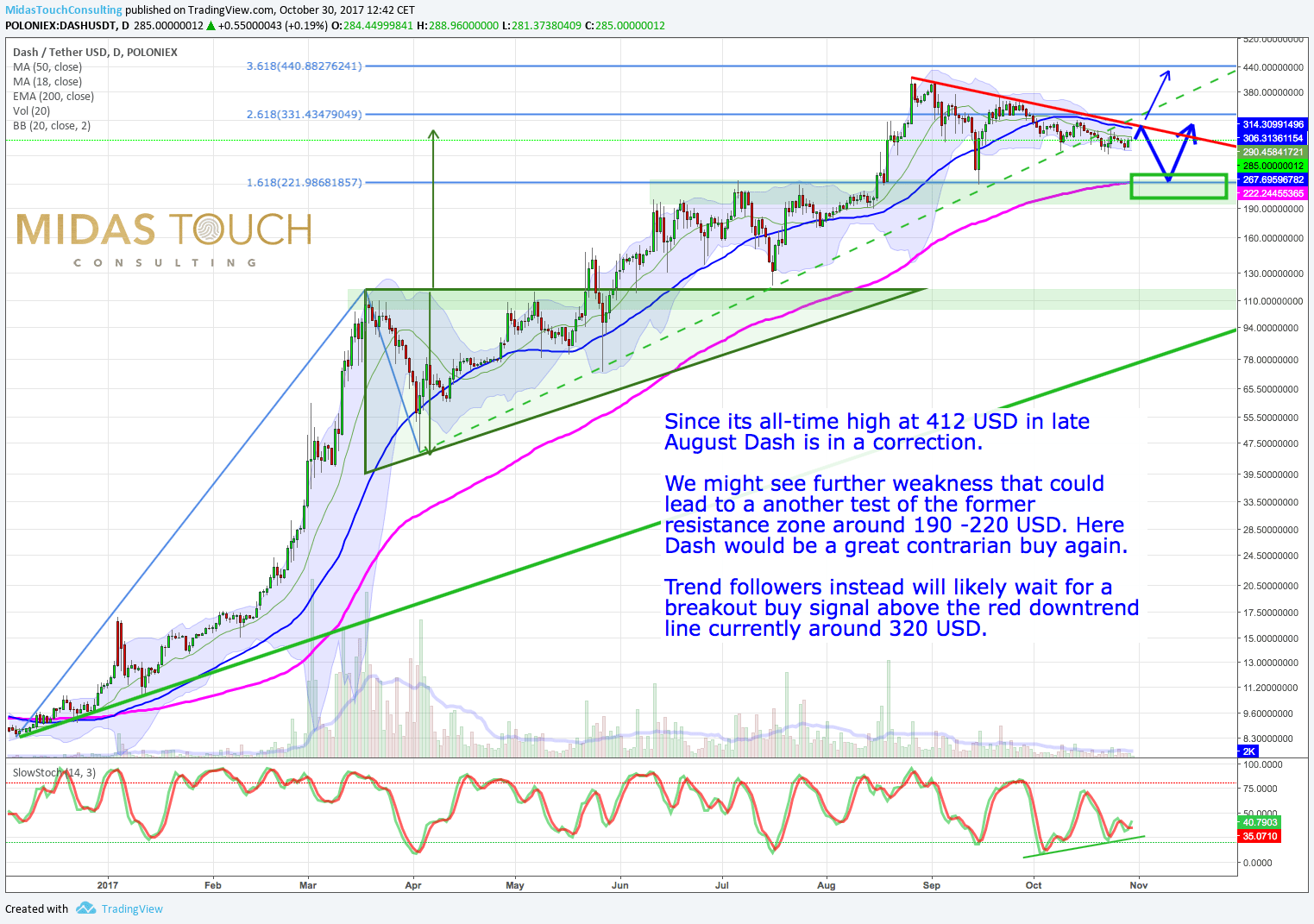 Dash has been a secret tip in the crypto scene for the last two to three years. Meanwhile, this has also been reflected in a substantial price rise up to more than 400 USD per coin. Originally, Dash has been launched under the name of XCoin and Darkcoin as an open-source peer-to-peer cryptocurrency and offers a similar design and functionality as Bitcoin.

Unlike Bitcoin, however, the specific Dash Full Nodes (these are servers that are constantly online and do hold the complete blockchain) are rewarded for their services with 45% of block rewards, just as much as the miners receive. As a result, in the future, the master nodes can afford even more costly operation of network nodes. The remaining 10% can be invested in development and marketing projects or otherwise by the Dash network. The decision is based on a democratic and complex but automated voting process by the master nodes.

Currently, this monthly budget is already around 2 Mio. USD and is expected to increase the visibility and stability of Dash in the future. Dash has been consistently developed over the past few years and has now been able to gather an impressive team. The unique features such as instant transactions, incentivized infrastructure, high levels of privacy and fungibility and a decentralized financing as well as governance make Dash one of the most promising Bitcoin competitors. One can also describe Dash as an anonymous and decentralized Paypal.

Technically Dash could still pullback towards 220 USD but in the medium to long-term four-digit rates seems to be only a matter of time. 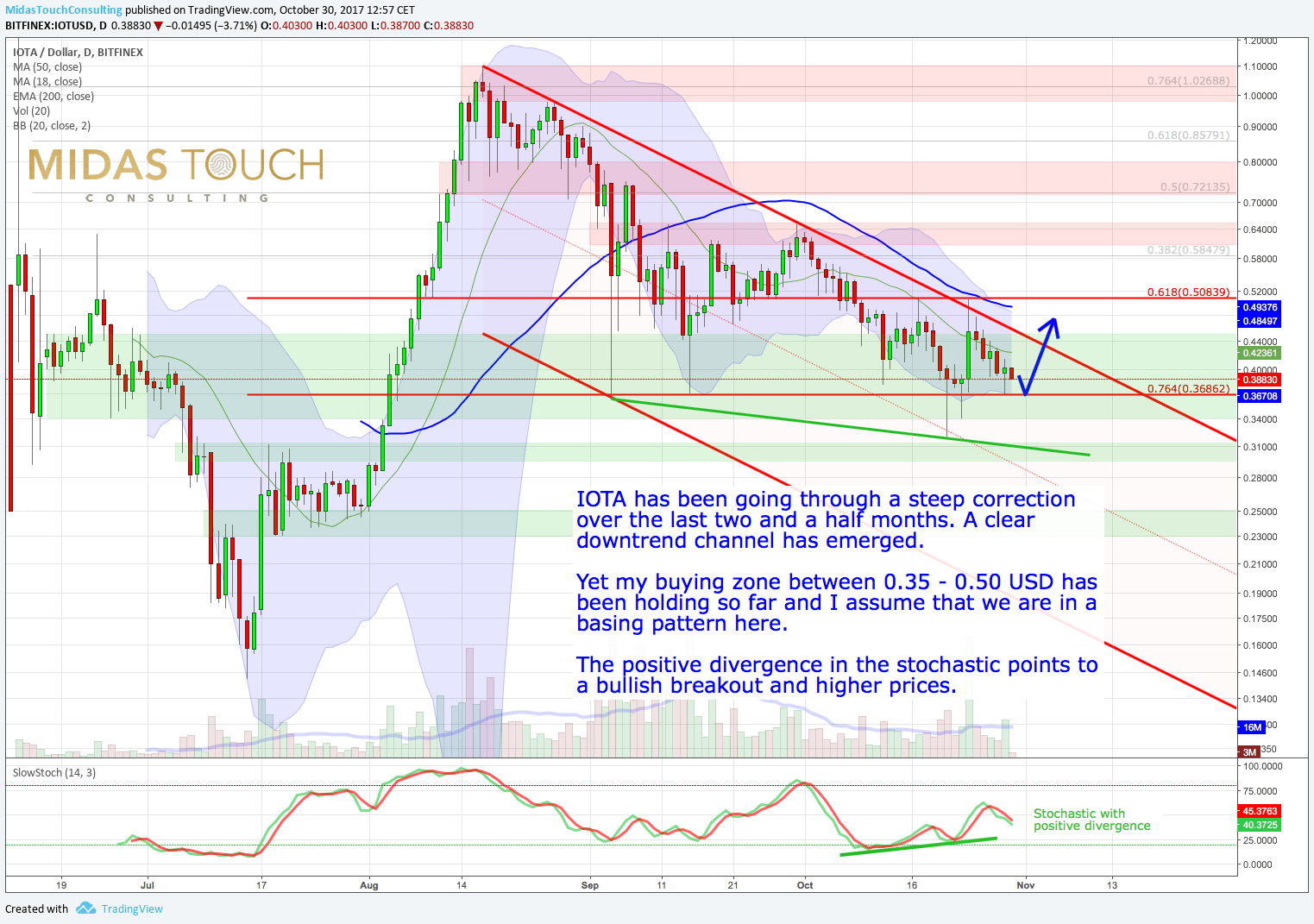 IOTA is an altcoin of the 3rd generation and is currently ranked 11th in terms of market capitalization at around 1.1 billion USD. The token solves the problems of the blockchain technology as the transactions are arranged in a form of tangle, meaning that each transaction confirms two previous transactions. Therefore blocks do not have to be processed further and the transaction fee is no longer required. At the same time, the tangle technology offers the same security as a blockchain.

IOTA could therefore clearly be superior to all other coins. The advantages of IOTA are due to the tangle’s high scalability, the non-existent transaction costs as well as the possibility of carrying out offline transactions. In addition, IOTA definitely has monetary characteristics (limited supply, as there is no built-in inflation) and could become the payment system for the “Internet of Things”, in which machines and automated systems operate and run business with each other in the future.

In my opinion, IOTA is one of the most promising Altcoins, which is currently trading more than 60% below its all-time high, and therefore has a very good risk/reward-ratio from a contrarian point of view. In addition, the industry is starting to become more and more interested in this token.

Looking at the chart IOTA seems to build a base here and might soon take off again. 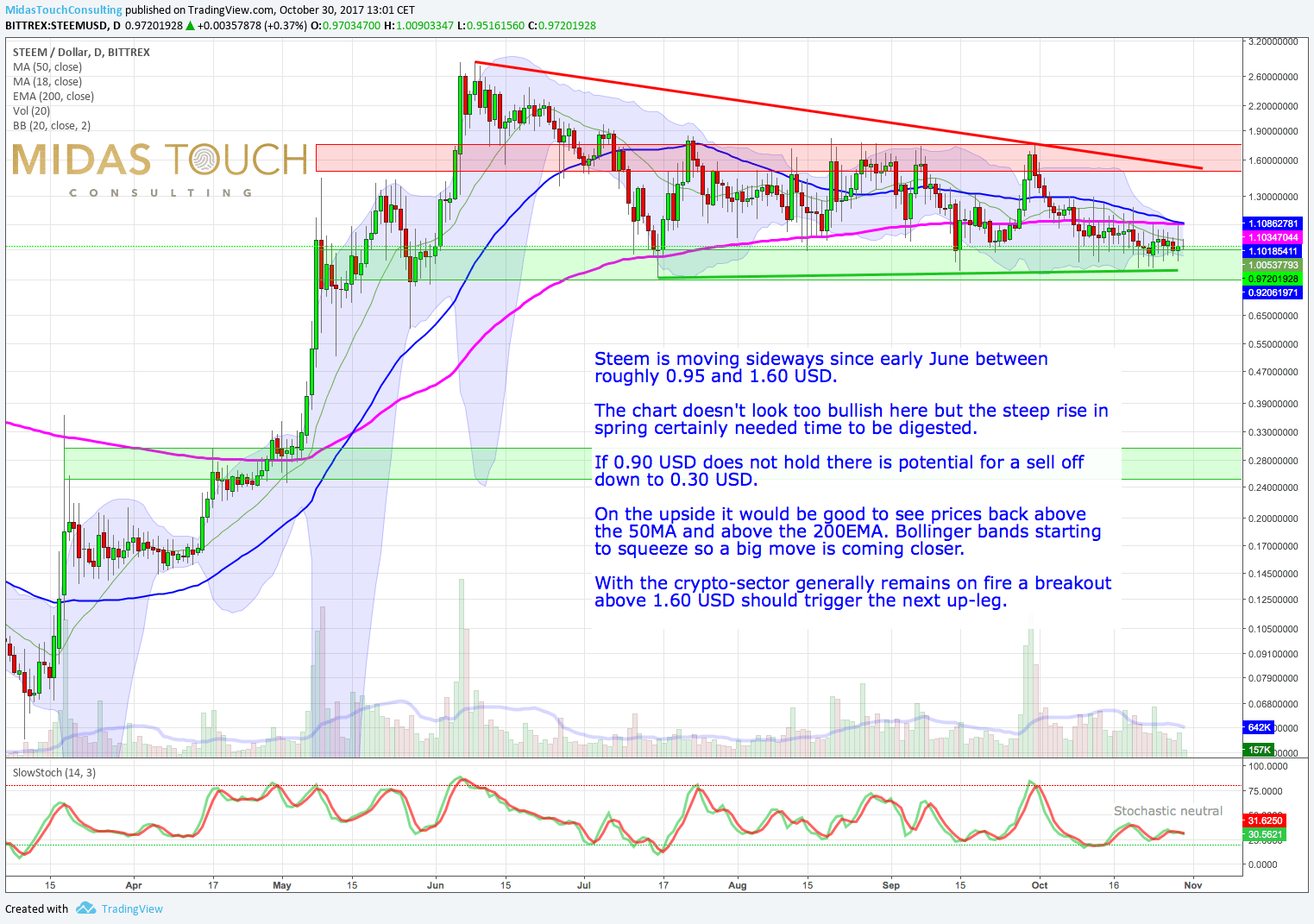 Steem is the cryptocurrency, which is not created by mining, but by content creation. The fascinating mix of an ad-free social network and a cryptocurrency is needed or generated by posting content on the leading blockchain social media and blogging platform www.steemit.com. The Steemit project was launched in 2016 with the idea of creating a decentralized and censorship-resistant media network. The network is open and allows all interested parties to develop their own applications. Users can post all kinds of content like on Reddit. However, these contents are stored directly in the corresponding blockchain, whereby authors of comments and posts can be rewarded with the cryptocurrency Steem. This makes censorship impossible.

While currently, more than 2 Billion users provide free content on Facebook yet the profits ending up in the pockets of Mark Zuckerberg and his shareholders, the authors at Steemit profit directly from their success of their contributions. In contrast to many other altcoins, this makes Steem already very interesting as it has a real blogging application. However, the platform still has some major weaknesses. In the medium term, if larger media companies want to use this platform for themselves, they will have to buy Steem Power to increase the visibility of their contributions on the platform. In conclusion, Steem is an alternative cryptocurrency with a real application and already more than 350.000 registered users.

The price of Steem has been moving back and forth roughly between 0.95 and 1.60 USD over the last couple of months. Below 1,00 USD Steems seems to be very attractive.

In the end, the different perceptions of all market participants will create future supply and demand and wil, therefore, determine prices and their future development. Cryptocurrencies, and above all Bitcoin, have developed extremely well over the last few years, especially over the past twelve months. Yet the end to this steep price explosion is not foreseeable right now. Currently, the market capitalization of all 1,231 listed altcoins together amounts to around 77 billion USD. This is less than one tenth of Apple’s MarketCap! Overall, less than 0.5% of the world’s population is currently invested in Bitcoin or Altcoins.

Call me crazy but I indeed believe we are right in front of a global buying panic into cryptocurrencies. Most of the money is already moving into Bitcoin first but many Altcoins will outperform Bitcoin disproportionately as they offer investors a form of leverage. My main argument for this buying panic is based on mass psychology. Too many investors have not yet been invested in this extremely small sector and are now realizing on a daily basis how all of their investments are losing purchasing power against Bitcoin & Co..

Of course, it is no secret that many inexperienced and young investors or traders are blindly and carelessly investing in cryptocurrencies. As well Bitcoin certainly has reached the mainstream and is the talk of the town. Likewise, most cryptocurrencies are lacking a real-economic application. Nevertheless, one should not underestimate the new competition for the best free market money.

Which of the many altcoins will indeed survive and possibly even replace Bitcoin in the future is written in the stars. With 100% certainty, however, we have to assume that the majority of Altcoins will eventually disappear worthlessly. Before that, for some of them, a trip to the moon is still waiting.

The presented Altcoins like Dash, Ethereum, IOTA and Steem are “just” a personal selection and therefore incomplete. However, the opportunity and potential of those four seem to be much higher than of the many others.