The beginning of wisdom lies in the definition of conditions. – Sokrates

Gold prices reached a new all-time high around USD 2,075 on August 7th, 2020, and then entered a correction that lasted almost nine months. 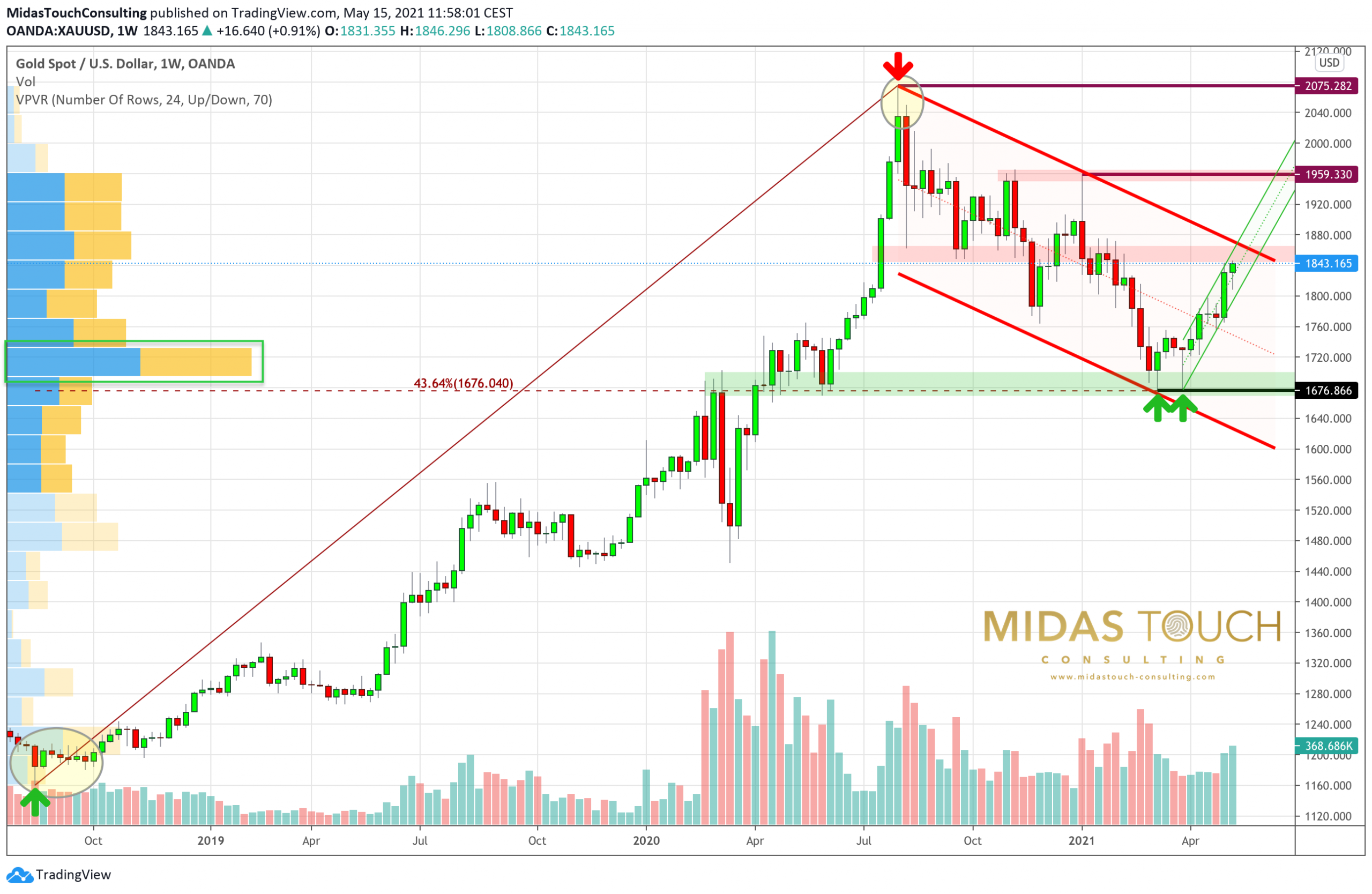 Gold in US-Dollars, weekly chart as of May 15th, 2021. Source: Tradingview

The first part of this correction was rather tough and confusing until the end of November 2020. After a quick bounce the sell-off then accelerated from the beginning of January 2021. It was only with a double low at USD 1,676 on March 8th and USD 1,678 on March 31st that the gold market finally bottomed out. Most likely, this double low marked the end of the correction and gold is now on its way back to higher prices and thus, in the medium to long term, also to new all-time highs.

The correction in the order of around USD 400 had become necessary last summer due to the exuberant euphoria. And this pullback has definitely been healthy in the big picture. With a strongly oversold situation and a pretty pessimistic sentiment, the foundation for the next big uptrend was likely laid under high trading volume around the USD 1,700 US levels. While platinum and palladium were able to largely escape this correction, the gold price pullback left clear traces on the vast majority of mining stocks. Silver, on the other hand, dipped into a month-long sideways phase and has so far been able to hold up somewhat better than gold.

The Midas Touch Gold Model™ gradually switched back into bullish mode in April 2021. 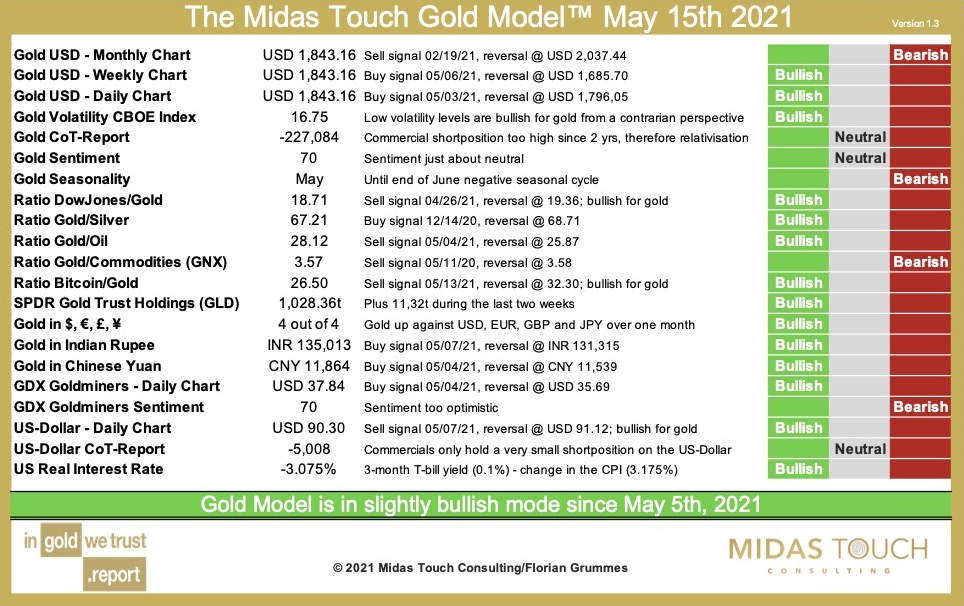 With the breakout above USD 1,800 on May 5th, the signal strengthened to “strongly bullish”. The new buy signals for gold price against the Indian rupee, against the Chinese renminbi and against the US-Dollar also contributed to this. In addition, the gold mining stocks (GDX Goldminers ETF) have been delivering a bullish signal again since May 4th. On top, the clearly negative real interest rates in the U.S. have been supporting the gold price for many months. On the other hand, the overly optimistic short-term sentiment together with the seasonal component are the only unfavorable factors in the coming weeks ahead. The strongest seasonal period of the year for the gold market typically begins in June at the earliest, but usually not later than July.

The following interesting conclusions can also currently be derived from the Midas Touch Gold Model™:

On the daily chart, the gold price is about to reach its strong resistance zone around USD 1,850. 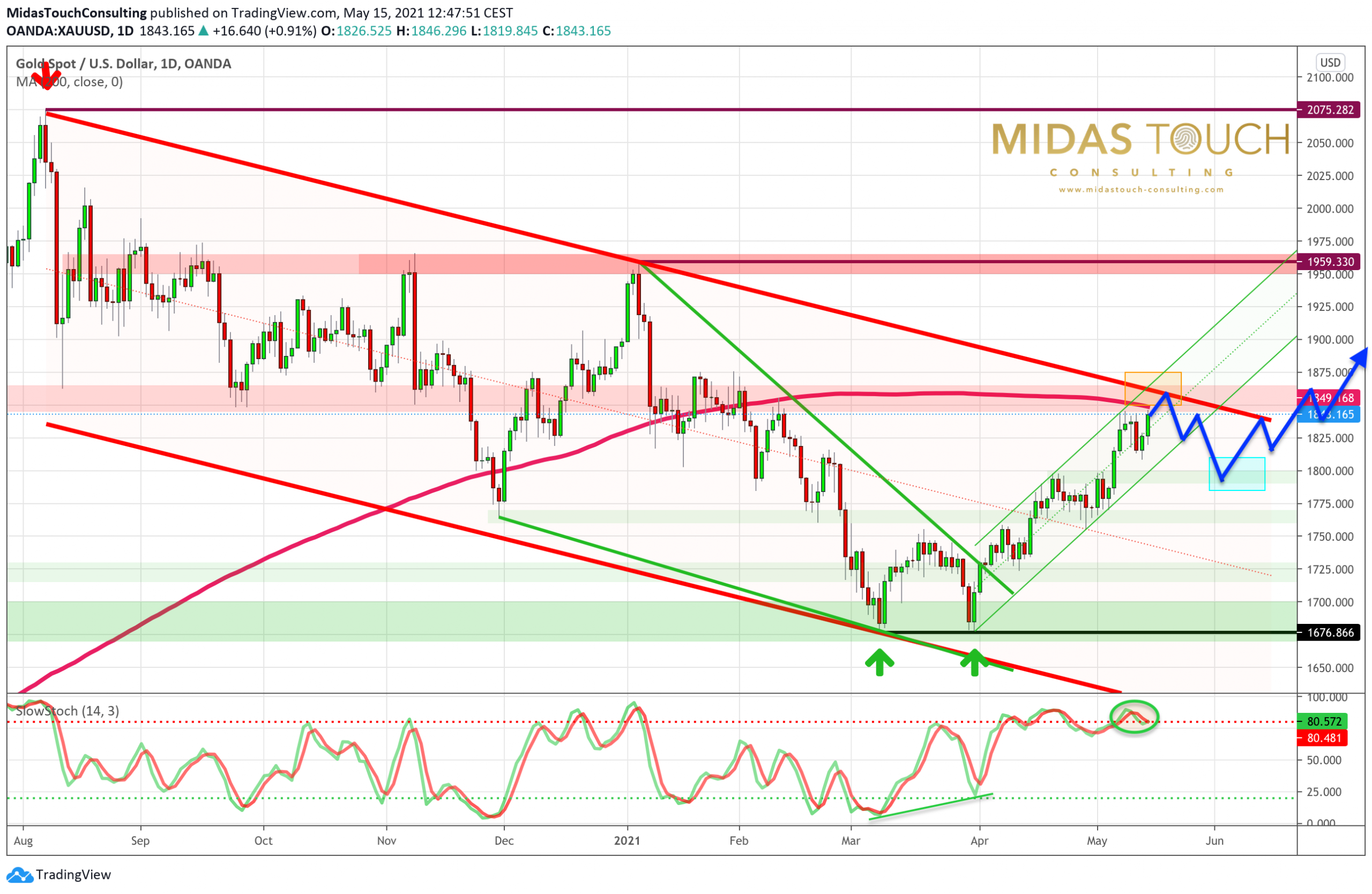 The downward trend of the last nine months runs between USD 1,850 and 1,860. In addition, the slightly falling 200-day moving average (USD 1,849) is also located here. Together with the overbought stochastic, the probability of an initial failure of the recovery rally is therefore extremely high. With a diversion or pullback to the area of approx. USD 1,785 to 1,810, the gold price could gain new strength. This in order to clear the resistance around USD 1,850 in the next step. Alternatively, gold prices could simply consolidate back and forth around the 200-day moving average in the coming weeks.

In the bigger picture, gold must overcome the strong resistance at USD 1,965.

Realistically, one should therefore assume that the gold market will still need some time before a sustainable breakout above this strong resistance zone can happen. As soon as this succeeds, however, the way would be clear towards the psychological mark of USD 2,000 and the all-time high at USD 2,075.