A dark pool is a private and anonymous place where you can trade all kinds of assets. In the traditional economy, dark pools make up around 15 percent of the cumulative trading volume. In the crypto world, dark pools are said to occupy between 20 and 40 percent. The main reason is that cryptocurrencies are being traded with way lower liquidity. Right now the crypto market has a 24 hour volume of more than $15b: Back in the hype phase it was more than four times higher. Assuming a 20 percent share, dark pools process more than $3b per day.

This is exactly where Republic Protocol comes into play. This project is building a decentralized and trustless dark pool ecosystem, featuring complete privacy and cross chain atomic swaps of Ether, ERC20 tokens and Bitcoin pairs.

According to their roadmap, the public testnet will be available this month and the mainnet within the next quarter. Another interesting fact is that the project is backed by some of the biggest venture capital firms in the crypto space: FBG Capital, Huobi Capital, Polychain Capital and many more. Many of those companies already run cryptocurrency dark pools on their own.

The native utility token of Republic Protocol is called REN and is currently ranked number 199 on coinmarketcap. By owning at least 100,000 REN (= approx. 9,7000 USD), investors can set up a so called darknode. These nodes will power the ecosystem around Republic Protocol. In return for this lock-up, darknode owners receive 0.2% of all trades which are performed through Republic Protocol.

If we are doing the math correctly, you will see that Republic Protocol could have a huge potential as a source of passive income…! Supposing that Republic Protocol might be able to conquer 1/10 of the dark pool market volume, we are talking about 300 Mio. USD per day. With a darknode owners commission at 0.2%, Republic Protocol might generate 600,000 USD in daily payouts. That’s 18 Mio. USD per month. And there will be a limited supply of maximum 10,000 nodes. That would translate into a monthly payout of 1,800 USD per master node or more than 200% per annum! And that might be even a pessimistic calculation approach.. Even with a daily trading volume of 100 Mio. USD, the return of a masternode will be huge. 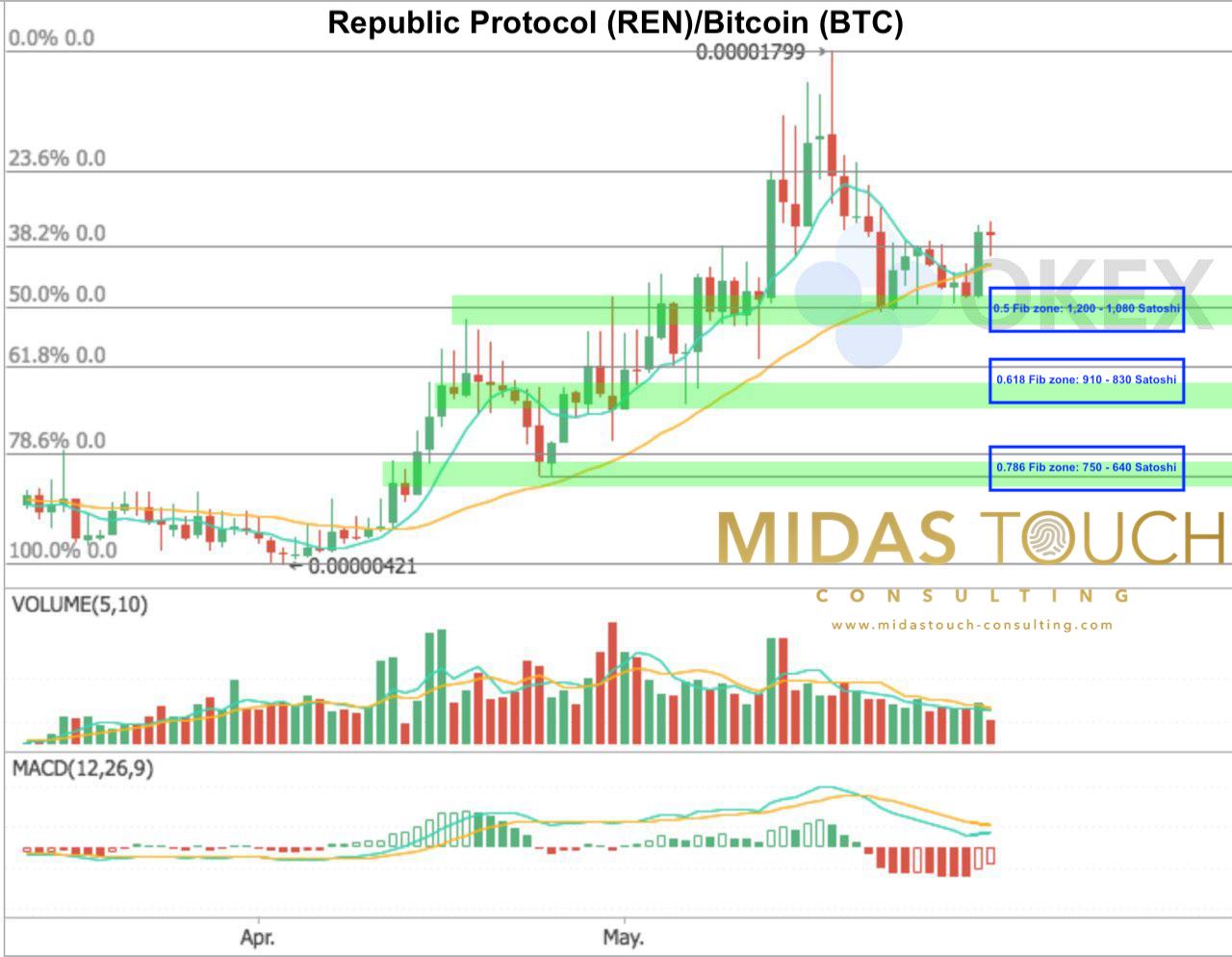 The price of REN is in a correction right now. It recently bounced off of the 0.5 Fibonacci level, and we might see a crossover of the MACD indicator soon. However, there is still a relatively high probability for another wave down. The 0.618 Fibonacci level (830-9100 Satoshi) should offer significant support, as we have seen the price initially struggling here. If this support fails, prices might retrace to the 0.786 Fibonacci level or even the 661 Satoshi low of April 25th.

Republic Protocol is another interesting project with a promising utility token. The development of alternative trading systems is certainly critical for trading large blocks of cryptographic assets while maintaining minimal price slippage and market impact. Proposing a decentralized open-source dark pool protocol, Republic removes the need for a trusted intermediary and provides crypto-economic incentives through a protocol token for governance.

With the development of a secure, decentralized, scalable dark pool protocol capable of handling billions in trading volume daily, Republic might be able to get a good share of the volume dark pools already trade. As well mining will also be implemented to discover orders on the distributed hidden order book. Miners will be paid in REN tokens.

Should the correction continue, Republic Protocol tokens REN might be a very good buy below 950 satoshi and especially below 800 satoshi. And with less than 10k in USD you might be able to generate a very potential passive income stream!