Silver – First recovery, then second leg to stand on

As suspected four weeks ago, silver prices continued to sell-off further amidst a panicked market environment. Despite record high inflation data, the strong U.S. dollar together with the collapsing stock markets also caused tremendous selling pressure in the precious metals sector. It was not until May 13th that a panic low of US$20.46 was reached. Since then, silver prices were able to recover by 8.5% to US$ 22.20. This recovery has still likely more room to move higher. However, the seasonal component remains unfavorable until mid-summer. Hence, after the completion of the ongoing recovery wave, low or even lower prices must be expected once again. Silver – First recovery, then second leg to stand on.

Gold/Silver-ratio points to a reversal in favor of silver 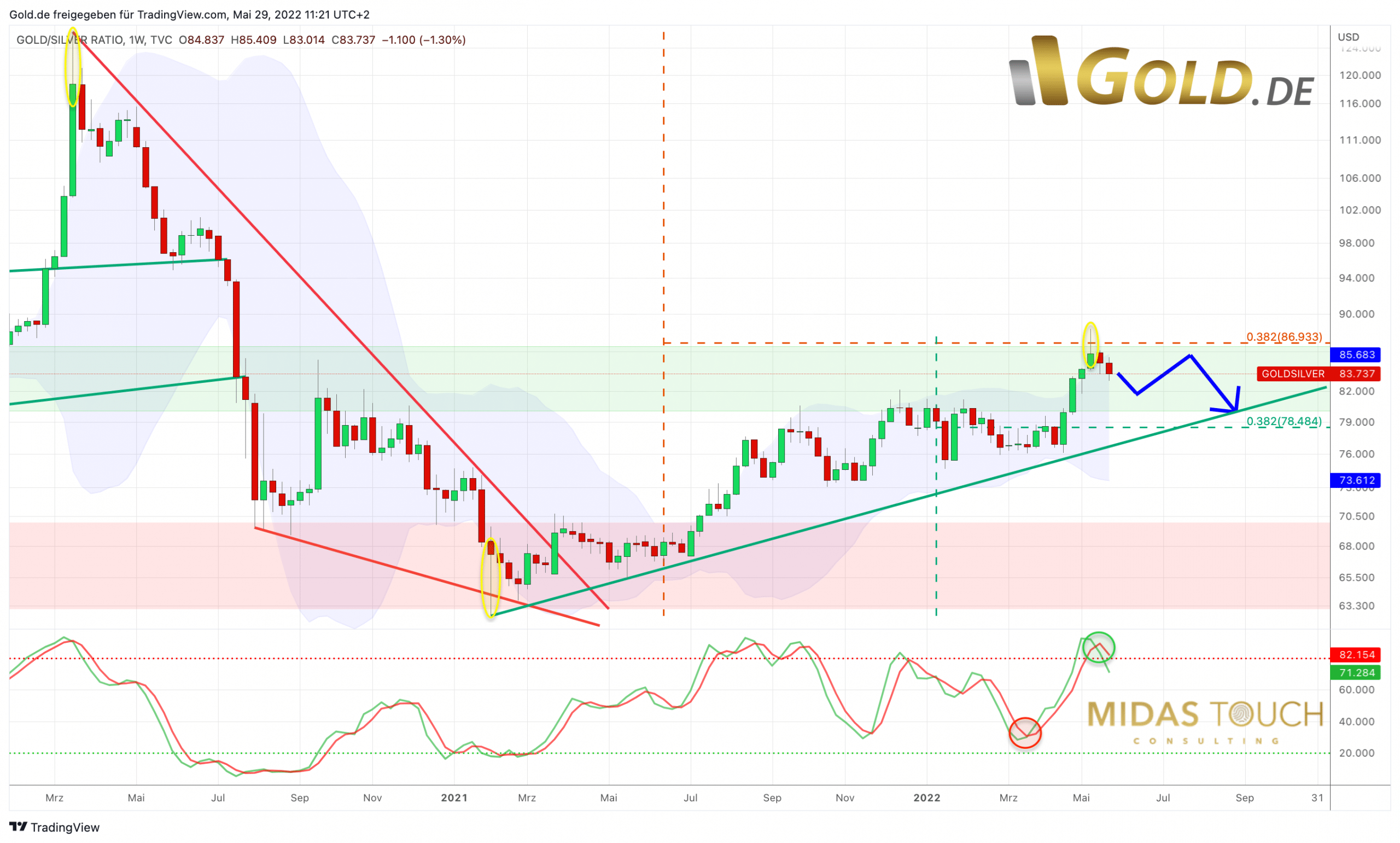 Since February 1st, 2021, silver investors have hardly had any reason to celebrate, as the silver price never managed to keep up with the good development of the gold price. Thus, the gold/silver-ratio rose within 15 months from a low of 62.51 to a high of 88.35. While gold only slightly missed its all-time high at the beginning of March, silver instead mostly pushed tenaciously through its large sideways range between roughly speaking US$21 and US$30. Last year’s high at around US$30 could not be reached at any time. Instead, in May, in a classic bull trap, silver also temporarily undershot its broad support zone between US$21.50 and US$23.00. Thus, the sensitive silver increasingly anticipated already since February 2021 the global liquidity tightening that caused havoc in all markets in recent months!

Since May 12th, however, the gold/silver-ratio now signals a possible trend reversal in favor of the silver price. At least the ratio has reacted to the 38.2% retracement and formed a reversal candle on the weekly chart. Only the coming weeks and months will show whether this can develop into some more positive. Nevertheless, the chance that silver investors will finally be rewarded for their patience in the coming years remains undoubtedly there. However, this will require a stabilization in the financial markets. Given the bombed-out sentiment, the chances for a major recovery in the coming weeks are pretty good. Of course, precious metals will also benefit from this, as they typically begin to price in a change of course in monetary policies at an early stage. A correction in the strongly overbought U.S. dollar might also give precious metals support & momentum in the medium term.

Assume only a temporary recovery in financial markets

Nevertheless, the situation remains tense for the time being, because so far the crash in stocks has unfolded rather gradually. An extreme panic peak has not been observed so far. Typically, however, it takes such a capitulation to bring a correction or a bear market to a sustainable end. In this respect, one is currently well advised to assume only a temporary recovery in the financial markets. For precious metals, this initially means the chance of a continued recovery. But subsequently, there should be another significant pullback in July or August, which could provide the second leg to stand on. It could also take another one or two months longer, since a final crash in stock markets towards September is likely and could pull down all sector in the markets once again. Generally speaking, silver prices below US$20 would open up significantly greater downside potential.

Silver in US-Dollar – At best, a recovery towards its 200-MA 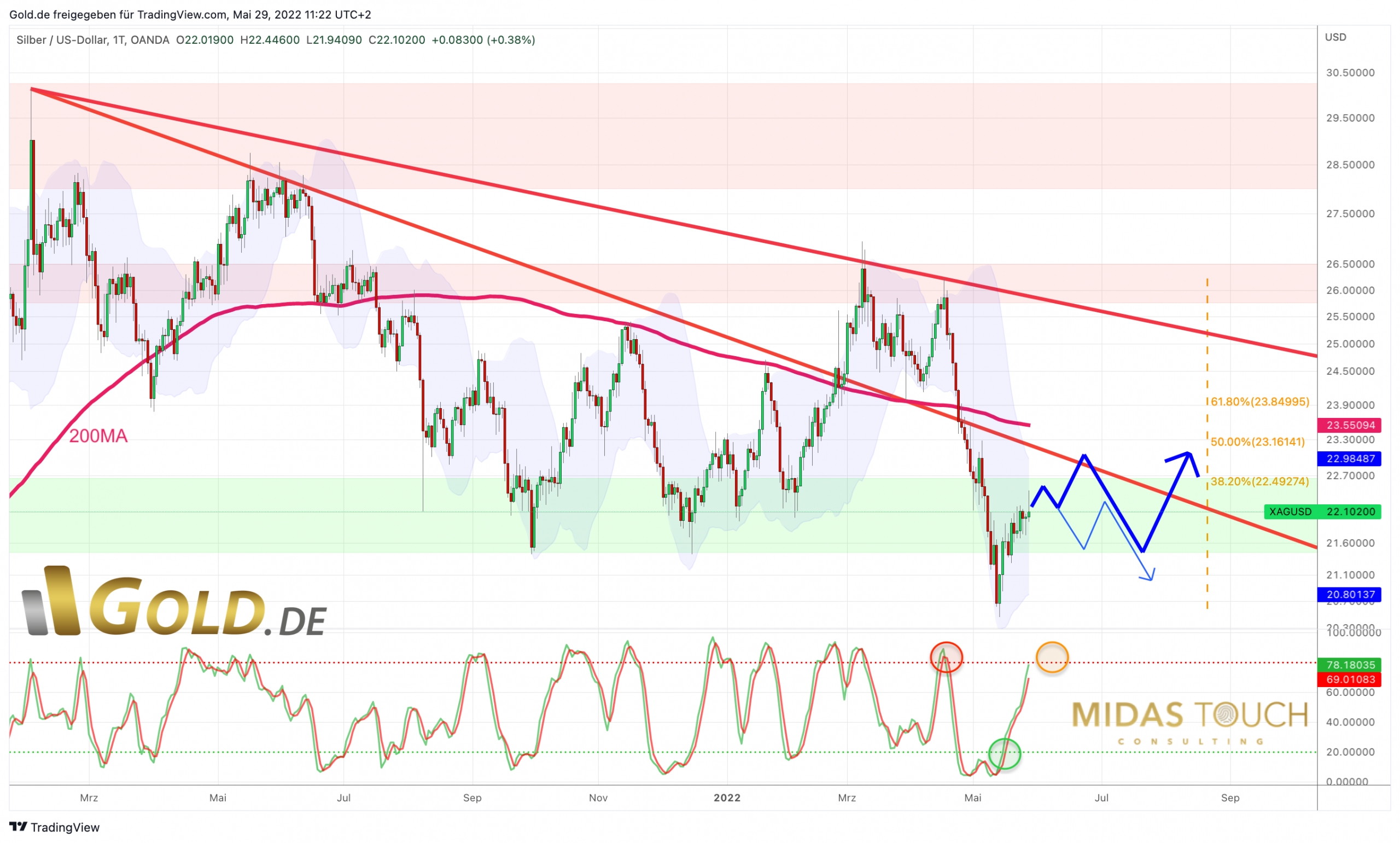 With a low at US$20.45 on May 13, silver briefly undercut all the lows of the past two years and thus probably once again shook off many weak hands. Following this bull trap, silver prices were able to recover back to the broad support zone over the last two weeks. However, this recovery has not yet reached its minimum target (the 38.2% retracement of the last wave down) around US$22.50. Yet, the daily stochastic has already started to reach its overbought zone again and thus provides a first warning signal regarding the sustainability of this bounce. Given the high pessimism as well as the relatively favorable situation in the futures market (CoT report), a more or less direct recovery towards the falling 200-day moving average (US$23.55) would also be quite possible. But don’t forget, the seasonal trend for silver only eases from July/August onwards.

In summary, the silver price is still in its large sideways range between approx. 20.50 and approx. 30 US dollars. The recovery that has started still has room in the short term. Until midsummer, however, a second foothold in the range around 21 U.S. dollars or somewhat lower would not be a surprise. In the medium and especially in the long term, the silver price “only” has to sustainably clear the $30 mark, in order to then be able to quickly take off in the direction of the all-time high around $50. Until then, however, silver fans will have to be patient.

The seasonal pattern for silver typically delivers an important low somewhere between June and August. Hence, a buy limit for silver finally makes sense again. With a bit of luck, silver will come back towards at least the US$21 level or somewhat lower. Due to the correcting US-Dollar, we could see silver slightly below 20 EUR. We therefore place a new buy limit at 20.20 EUR, to make sure we get during the summer lows.

Those who still need to increase their physical precious metal holdings significantly (recommendation min. 5% and max. 25% of total assets) do find good prices at current levels already. In the end, it is not the best price that matters, but only the fact that you hold it in your own hands.

Analysis initially published on May 27th, 2022, by www.gold.de. Translated into English and partially updated on May 29th, 2022.

Feel free to join us in our free Telegram channel for daily real time data and a great community. If you like to get regular updates on our gold model, precious metals and cryptocurrencies, you can also subscribe to our free newsletter.

Disclosure: This article and the content are for informational purposes only and do not contain investment advice or recommendations. Every investment and trading move involves risk, and readers should conduct their own research when making a decision. The views, thoughts, and opinions expressed here are the author’s alone. They do not necessarily reflect or represent the views and opinions of Midas Touch Consulting.