Over the last four weeks, gold has kept pretty much to our forecast from July 8th. Initially, prices fell back to 1,681 USD, only to recover quickly and impulsively to 1,794 USD since July 21st. Gold – Summer rally starts with promising momentum. 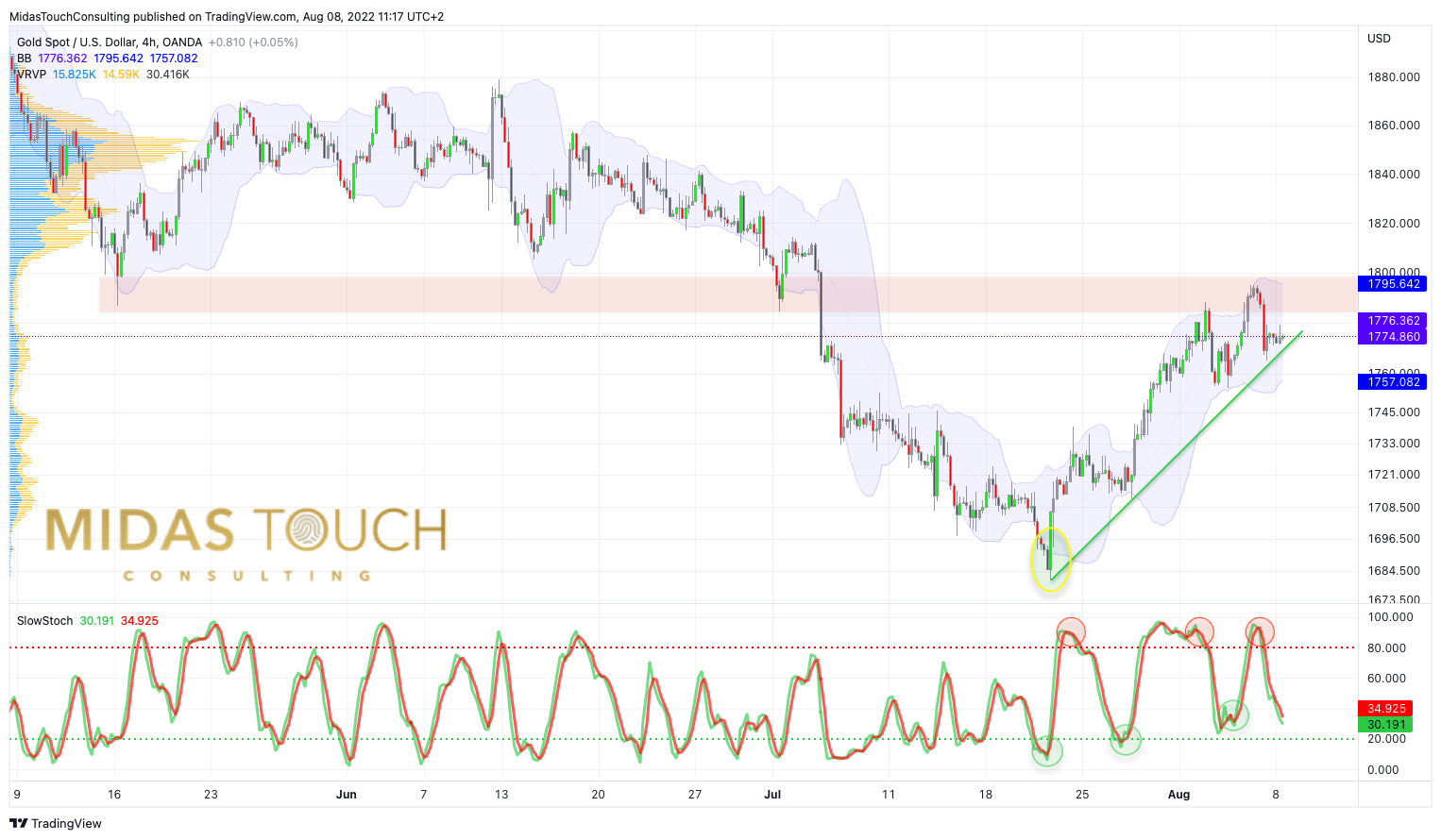 Now, gold is trading around 1,775 USD and there are no signals for the end of the recovery. On the contrary, the seasonal window is very promising and any further geopolitical tensions between U.S. and China could quickly intensify the summer rally over the coming weeks. In general, financial markets could also become a bit more risk-affine as the ongoing mid-summer recovery rally continues, which should also help gold prices. Nevertheless, in the context of a bear market rally, the air in stock markets will become increasingly thiner, too. Caution and a high liquidity position remain the order of the day here. 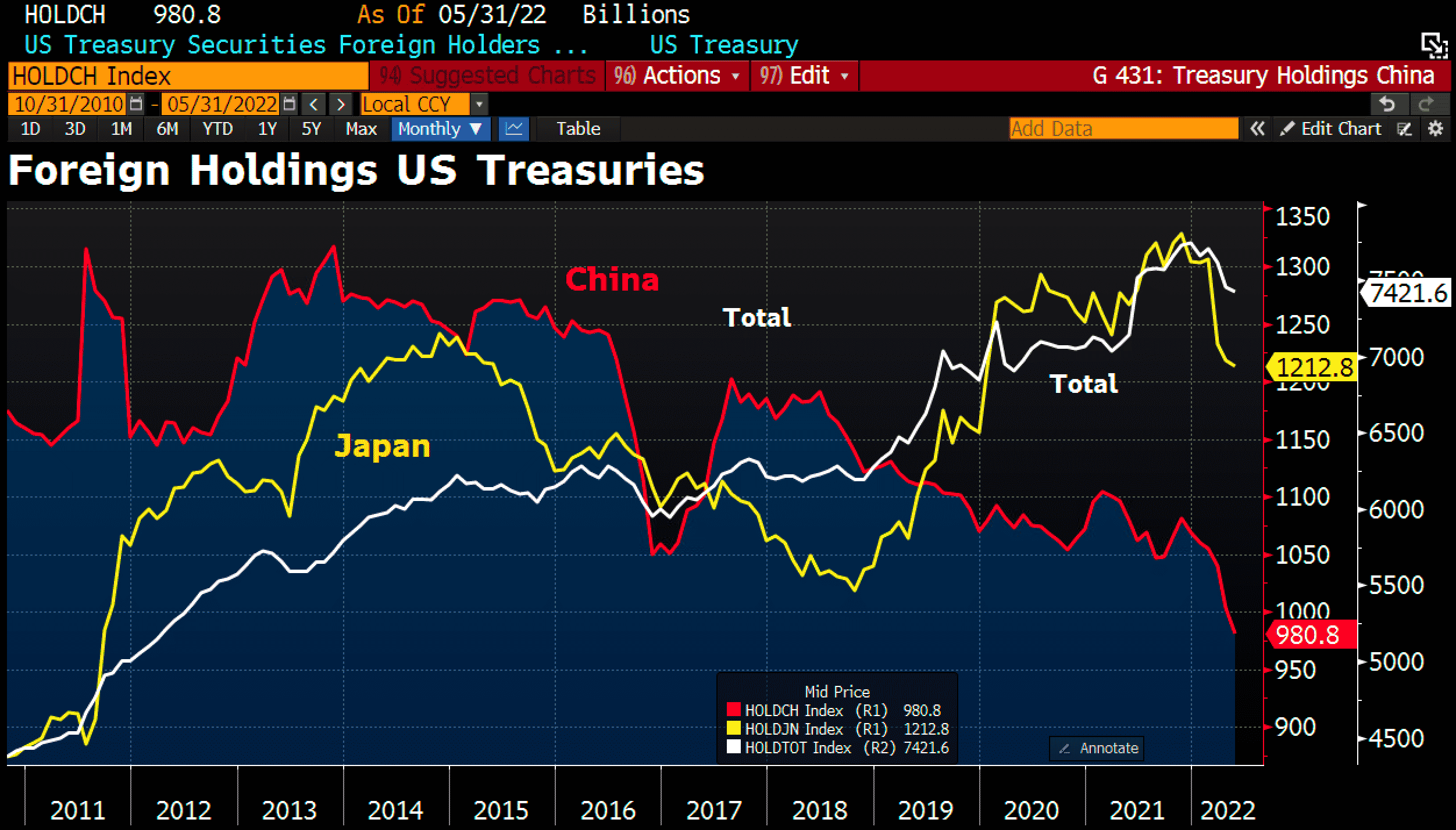 In the bigger picture, one has to give gold credit for its relative strength in this difficult environment. Gold could have corrected much lower given the dollar’s strength. Although the U.S. dollar was the only one to make significant gains, similar to the financial crisis of 2008, the dollar’s strength is at the same time gnawing away at the reserve status of the U.S. dollar.

While the U.S. is increasingly using its greenback as a political weapon against “rebellious” emerging market nations such as India (India is buying Russian oil with rupees and rubles), China has consistently reduced its holdings of U.S. bonds in recent years. All in all, an increasingly large part of the world wants to break away from the yoke of the U.S. dollar as quickly as possible. However, an alternative reserve currency accepted by all does not (yet) exist. Therefore, sooner or later, gold will become the most important anchor for the realignment process of the international monetary system.

At the same time, markets are trying to speculate as to when the Fed as well as other major central banks will be forced to abandon their tighter policy regimes. Unless something breaks, whether it be inflation or a crucial part of the financial system, a material change in central bank’s policies is not foreseeable at the moment. 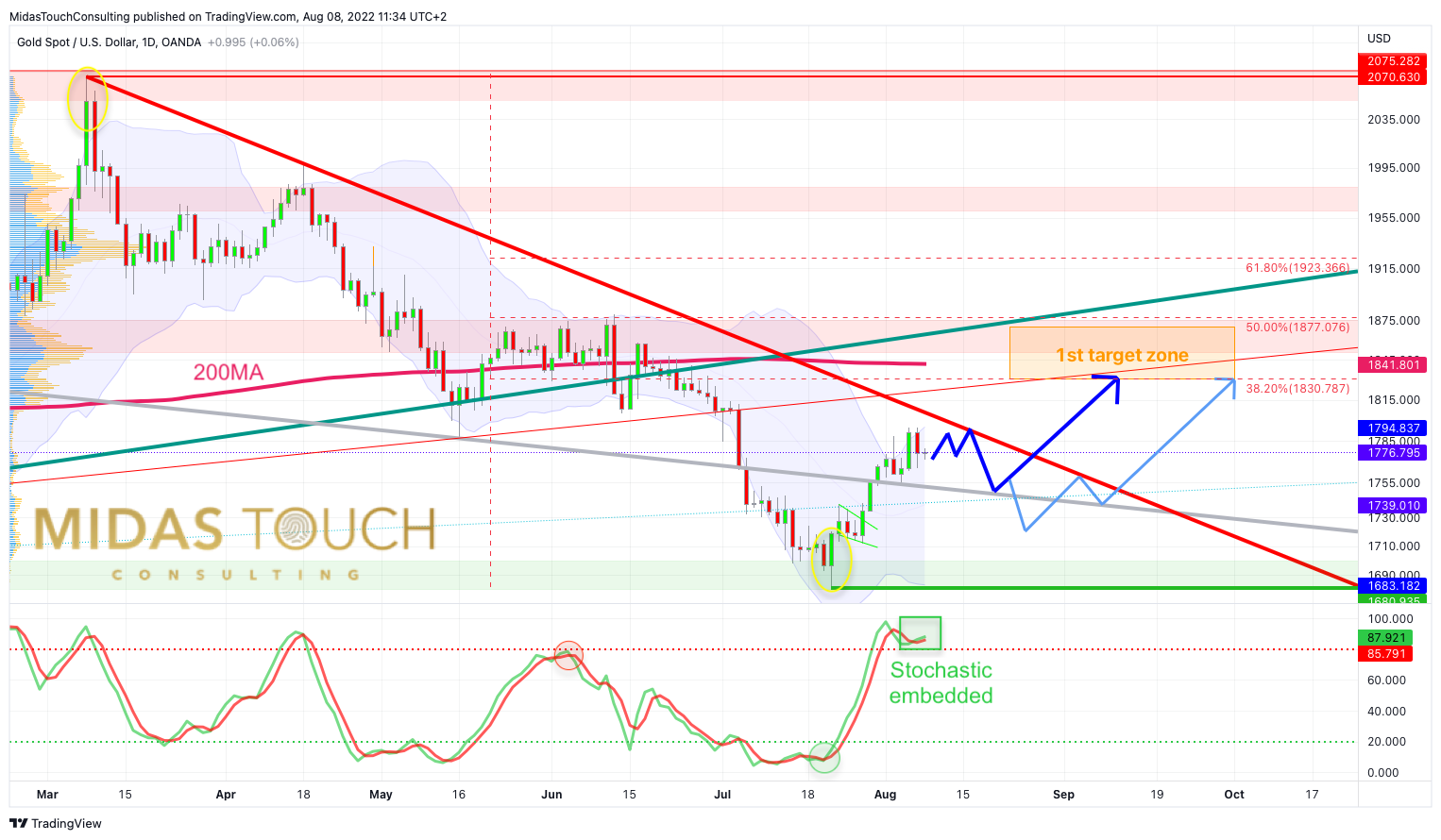 After a four and a half months slide to the downside, gold prices found a low at 1,681 USD, which coincides with last year’s triple bottom (1,678 USD). Since then, prices have recovered impulsively and quickly gained 113 USD or 6.7% within 11 trading days. Between 1,785 and 1,795 USD, gold bulls have met a resistance zone.

Fortunately, the stochastic oscillator has transformed into the super bullish “embedded status” on the daily chart. Hence, the new uptrend is locked in and the summer rally could directly gain further momentum. Despite any short-term consolidation, a realistic minimum target for the coming weeks would be the 200-day moving average (1,841 USD).

Alternatively, gold prices may first need to take a breather in order to gain strength for a continuation of the recovery. Either prices would consolidate sideways between 1,790 USD and 1,750 USD, or it would take a deeper pullback  towards 1,720 USD to 1,705 USD. However, the probability of such a deep pullback is considerably lower.

In summary, the price action in the gold market is promising. The bloodbath phase ended with a final low at 1,681 USD and gold dynamically started into its two best months of the year. Until the end of September or even mid-October, seasonality is now very favorable for the precious metals. In conjunction with a new buy signal on the weekly chart, the uptrend should therefore approx. run for the next two months. The first price target is the 200-day moving average in the range of 1,830 USD to 1,855 USD.

Next buying opportunity only below 1,700 EUR

With our purchase limit of 1,675 EUR, mentioned four weeks ago, one were able to add gold at lowest prices between July 19th and July 21st. Right now, gold is trading around 1,740 EUR and there is no reason to chase current prices. The next reasonable buying opportunity would only arise again at gold prices below 1,700 EUR.

Feel free to join us in our free Telegram channel for daily real time data and a great community. If you like to get regular updates on our gold model, precious metals and cryptocurrencies, you can also subscribe to our free newsletter.

Disclosure: This article and the content are for informational purposes only and do not contain investment advice or recommendations. Every investment and trading move involves risk, and readers should conduct their own research when making a decision. The views, thoughts, and opinions expressed here are the author’s alone. They do not necessarily reflect or represent the views and opinions of Midas Touch Consulting.