December 4th 2020, Gold – A bounce and maybe the turnaround

Gold – A bounce and maybe the turnaround

Since the new all-time high at US$2,075 on August 7th, the price of gold has moved into the expected correction over the past four months. At first, it was a tenacious stretch above US$1,850 and for three months, market participants weighed themselves in security due to the prolonged and rather mild sideways consolidation between US$1,850 and US$1,935. However, since November 9th starting at an interim high of US$1.965, Gold prices have become under massive pressure. This “bloodbath” forced gold prices more than US$200 lower within just three weeks. Only last Monday, November 30th, gold finally seems to have found at least a temporary low at US$1,765. Since then, gold and silver have recovered significantly on a US dollar basis. On euro basis however, the receiver has been rather shallow due to the strong euro and the weak US dollar. Hence, even though a bounce and maybe the turnaround in gold is in place, a European investor has not missed much so far.

Correction is coming to an end

Overall, the wait-and-see attitude of the last few months has been absolutely justified and correct. For quiet some time it was not clear that this correct would end with a bloodbath phase. What is important now, however, is that the gold market has been at least partially cleaned up with this sharp sell-off, thus laying the first solid foundation for a new uptrend. In the short term, further uncertainties and possibly even lower lows cannot be ruled out. However, the outlook for the coming year 2021 is very promising.

As early as the 1st quarter of 2021, gold prices should be able to return to around the US$2,000 level. It is not yet possible to estimate whether new all-time highs will occur by spring too. At the latest in the midsummer of 2021, however, the price of gold should be able to break out above US$2.075 and then continue to move towards US$2,500 in autumn 2021. Similarly, given the fatal overall situation in financial markets and most economies on the planet, an acceleration towards new all-time highs could be conceivable as early as the first half of the year too.

After the price of gold bounced five times from the support zone between US$1,850 and US$1,865, with their sixth attempt the bears finally finally forced the breakthrough to the downside! As a result, prices quickly skidded lower and lower during the last week of November, while Americans celebrated “Thanksgiving” and the trading volume was extremely thin due to the holiday. However, gold and silver mining shares did not track this sell-off. Instead, this divergence, along with the double-low at US$1.764, encouraged the gold bulls to post a bounce since last Monday. The 200-day moving average (US$1.802), which was pretty stretched like a rubber band to the downside, also ensured the rapid “snap-up” .

This countertrend move quickly reached a first major retracement level of US$1,841 on Thursday morning at US$ 1.843. Now, only a few dollars are missing up to the former support at around US$1,850. Should we see a reversal between US$1.840 and US$1.860, the bottom and especially the turnaround are not safe yet. At least, this should likely to be followed by another test of the rising 200-day moving average around US$1,800. Alternatively, the sell-off could be taken up again and continue towards US$1,700 to US$1,750. A daily close well above US$1,850, on the other hand, significantly increases the chances that the low is in. Either way, the next few weeks are likely to be marked by uncertainty and ambiguity. However, the opportunity for the turnaround in the gold market is now within reach. 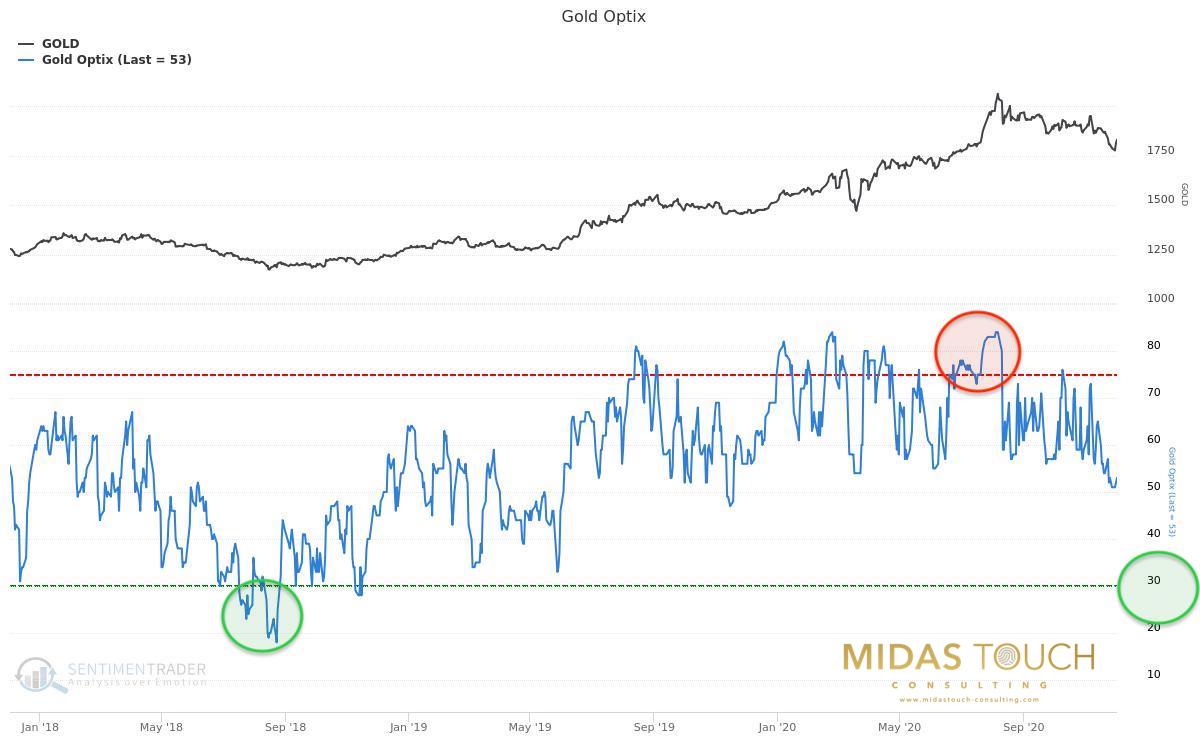 However, sentiment data speaks against a final low. The steep slide in the gold price over the last three weeks has so far caused only little panic in the gold market. Quantitatively, sentiment numbers are neutral currently. But in the prevailing crack-up boom, there does not necessarily have to be a dramatic “panic low”. The difficult correction over the last four months has certainly driven any excessive euphoria out of the sector.

Gold – A bounce and maybe the turnaround

In summary, the correction in the precious metals sector has progressed very far and is likely to be in its final stages or has ended already. One more new low below US$1,765 can not yet be completely ruled out. More likely, however, would be a bottom building process. A nervous back-and-forth in the coming weeks could still test the US$1,800 mark and/or the rising 200-day moving average again.

In view of the oversold situation on the weekly chart, it´s time to buy physical gold and silver.

In retrospect, the increase in the purchase limit up to 1.650 euros four weeks ago was clearly too early, as gold prices subsequently came under considerable pressure. So far, the sell-off ended at 1.473 euros on Monday. Currently, one fine ounce of gold is almost 130 euros cheaper than four weeks ago. In the long-term comparison, however, a hundred euros more or less will not play a major role. Nevertheless, we are reducing the new purchase limit down to a maximum of 1.550 euros. We currently see really good prices to buy which should be used.

Those who do not yet own any gold and silver at all should immediately exchange at least five percent (5%) of their total assets (net worth) into precious metals. It is not the best price that matters, but only the fact that you hold it in your own hands.