Cryptoassets have had a flat three months followed by nearly two months up. Most of the major cryptoassets are up at least 50% from mid-December. That’s easy to see just looking at a long-term chart of Bloomberg’s Galaxy Crypto Index below. So, at this point I’d tell my Super Traders who are interested in cryptos to establish their core positions. For an idea of what “core positions” might mean, see the second article in Tharp’s Thoughts last month. That article is not a recommendation but rather a simple idea of how to think about a buy and hold strategy with cryptos. 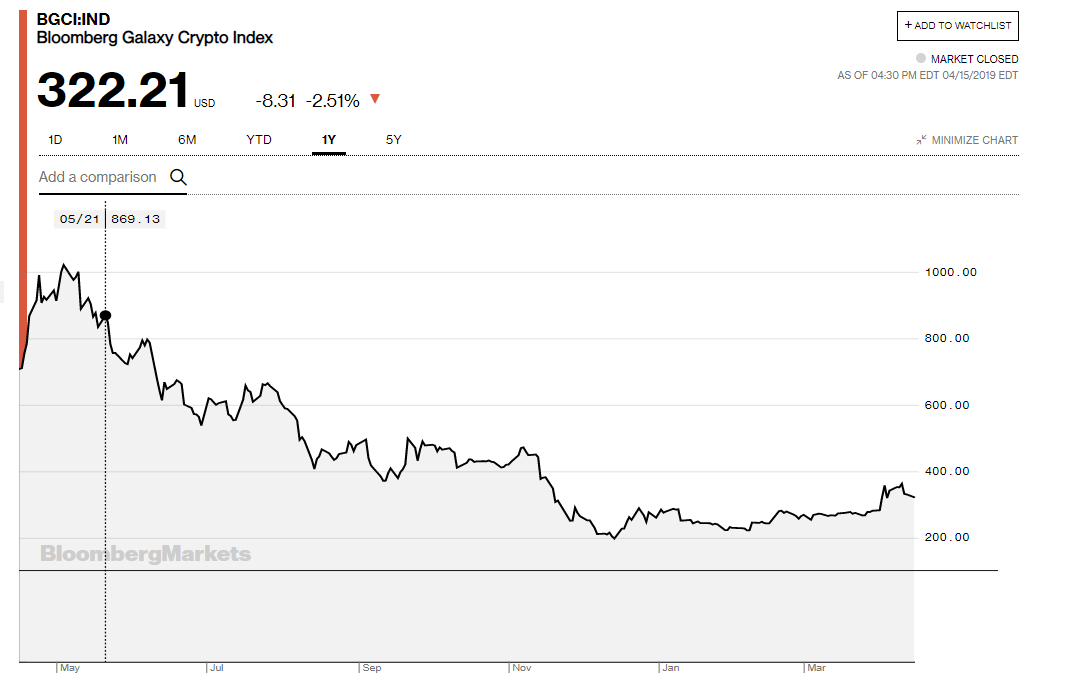 Bloomberg tracks ten major cryptoassets and started their index in May, 2018 at 1,000 – slightly before the dotted vertical line on the chart. They must have added historical prices from before that to create the chart. It’s clear that the market has been relatively flat and then up slightly the last two months. Up slightly means up over 50%.

Just because BTC is a 1st generation crypto does not mean it is likely to die off and be survived by the later generation cryptos. It’s hard (impossible?) to predict which cryptoasset will thrive or even survive as we move forward as there are so many variables affecting each crypto. Technology, use case, adoption, support, and multiple other factors come into play. For now, we monitor these five cryptos because they represent several relevant aspects: public ledger – BTC, smart contracts – ETH + NEO, scalable contracts at minimal cost – IOTA + SKY. 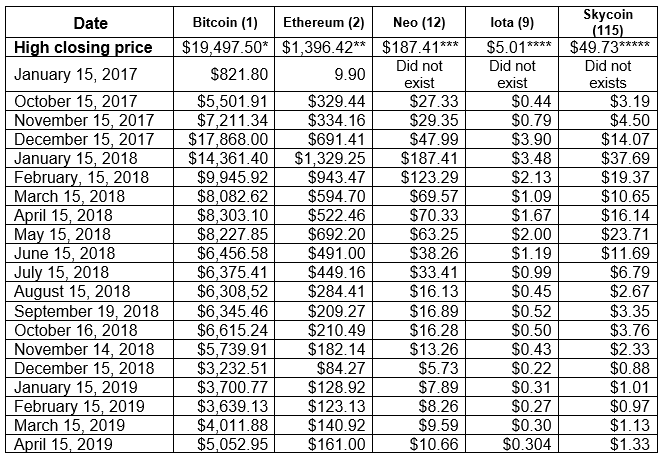 Dates of the All-Time High Closes.

All five of these cryptos are up significantly from mid-December. In my mind, we have a low-risk time right now to enter the market. Does this mean we have seen the bottom? Not-necessarily, but I doubt that there is much more downside with all the strong institutional bias to enter into the market. Most pension funds want some exposure to cryptos just because they are a strongly non-correlated asset class that can give them a huge upside potential through investing only a small portion of their assets.

The table below shows a similar market-based pattern to the individual cryptos in the table above. The total market cap for cryptos is the highest it has been since November of last year. 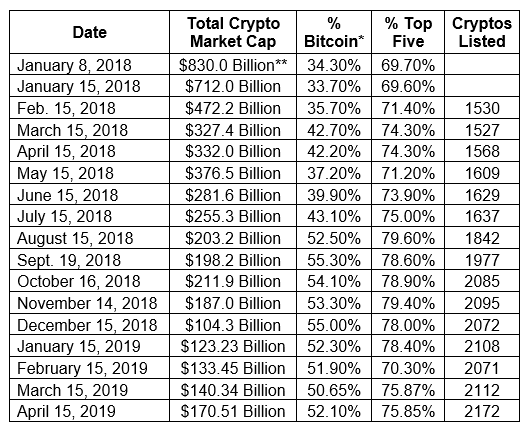 * Bitcoin was as high as 90% of the market cap of all cryptos at the beginning of 2017 to as low as 32% at the top of the market. Part of the difference is that there are now nearly 2000 cryptocurrencies. So the number keeps going up even though the market cap goes down.

** This was the peak of the crypto market in terms of market cap. Data via Tama Churchouse, Asia West Investor email on 4/11/18

The data in both of these tables comes from coinmarketcap.

For the last year, we have depended on two different cryptoasset models which used the Market SQN score but one of them pulled price data from coinmarketcap. That data is no longer available so one model no longer works. Thus, we can only use the coin price data from Yahoo Finance which is somewhat limited. We currently track 97 crypto in this model. Of those –

One crypto scored very bearish but actually, that one no longer exists. 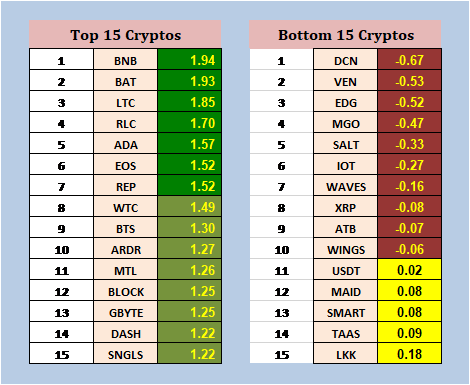 Notice that all 15 cryptos on the top list have a Market SQN® score above 1.0 and seven have strong bull scores. Two months ago, none of the symbols on the top list had SQN scores above 1.0.
BNB, Binance’s coin was strong last month and is now in the top spot with six other coins – also with strong bull scores: BAT (now available through Coinbase), LTC – also available through Coinbase, RLC (I had not heard of RLC before because it is #116 in terms of market cap), Cardano, EOS (which is up nearly 300% from its lows), and REP (Augur) which is #34 in terms of market cap.

What’s even better than the strength of the top list is that of the 15 weakest cryptos, none are red this month and only 10 are brown. The worst score is just -.67. That means that in the 100 cryptos listed on Yahoo, at least 90 are either neutral or bullish.

Below is the crypto market model organized by major categories:

In the major categories of coins, Bitcoin and Bitcoin Cash are both bullish with Market SQN scores over 1.0. And now, GBTC is selling at almost a 30% premium whereas it had only about a 15% premium at its low two months back in February.

We are still looking to add a number of crypto symbols to the model’s database by using a new price data source so I hope to show you the fruits of that work soon – perhaps next month. It’s actually rather disappointing that the XLQ add-on for Excel can no longer get data from coinmarketcap.com. But hopefully we will have the new information in the model by next month.

Next month will be about one year prior to the next BTC halving (i.e, the Bitcoin network will only be able to produce half as many coins in the same time period as now which will greatly lower the supply of new coins). That halving plus new institutional access to cryptos should greatly increase the price.

Looking Forward To The Coming Months

First, look forward to Fidelity opening crypto trading to its institutional clients this month. You and I won’t be able to do anything through Fidelity, but the big boys will.

The second thing to look forward to soon is the opening of BAKKT – ICI’s platform for allowing institutions to trade cryptos safely and have someone else secure the assets. The federal government shutdown delayed BAKKT’s regulatory approval but it should happen soon.

And then, probably before July, we should see the first crypto ETF coming to market and that will have a huge impact.

Everyone has probably heard that Facebook is planning its own cryptoasset. Remember that social media cryptoassets are among the best performing groups right now. You will probably not want to own the Facebook coin because it will be closely controlled while the whole point of cryptoassets is decentralization.

Beliefs And Looking Further Ahead

I was basically wrong about cryptos turning around last year. 2018 saw a crypto market meltdown which allowed institutional investors to acquire a large inventory of cryptos inexpensively. By the end of 2019, my guess is that the whole crypto field will be at new highs (at least coins with real value) and a lot of the others will come along for the ride. This is not, however, a prediction.

We are not a prediction newsletter – other newsletters do that. I’m just adding up the following belief and facts:

To me, all that says “bull market”.

Remember though that cryptos are still a dangerous game and even those who know what they are doing could lose their entire cryptoasset portfolio. There are many ways such a loss could happen – even if you do everything correctly. Recently, a Canadian crypto-exchange CEO allegedly died and now the exchange’s cryptos are missing. They have found the exchange’s hard wallets where supposedly all the cryptos were stored but – the wallets are empty – so fraud was definitely involved.

Expect more of that kind of occurrence before cryptoasset “investing” becomes a lot less risky. But that is what makes cryptos a new “wild west” type game with huge profit potential for those who know what they are doing and who are willing to accept the risks involved.

If you have a similar belief to mine about blockchain technology changing everything, you could take a small amount of money – small enough that a total loss wouldn’t hurt your net worth – and consider opening up some core crypto positions.

This report is meant only to give you a status quo of the cryptoassets markets. The purpose of this report is not meant to give investment recommendations or to be predictive in any way.

Until May 15th, this is Van Tharp.