Bitcoin, the power of news

Interpreting news to use for future price forecasts is as tricky as finding the solution to what came first, the chicken or the egg. Typically, news is late, meaning someone knew before, so news events are already priced into the price. Unfortunately, the news is often nothing more than lies nowadays, and distinguishing what’s real and what’s fake is another challenge. News is mainly beneficial for rationalizing a prior price move for the curious mind. Little more than a story for lunch break to claim “I told you so” before work colleagues. Bitcoin, the power of news.

But not so fast! There are a few ways to navigate through the maze of news that can be helpful to one’s investment timing for entries and exits into and out of the markets.

The two most significant market influencing news types are a real surprise and a sum of news items forming sentiment.

Consequently, when China recently banned bitcoin, the market’s reaction was timid. China had banned bitcoin before. Their bans of companies like Google, Facebook, Twitter, and Snapchat, had those tech companies still soar hundreds if not thousands of percent higher. In short, it was no surprise like an unforeseeable weather catastrophe to crops, terrorist attacks, or otherwise genuine surprises that can shake emotions in market speculators and, as such, turn price direction quickly.

Surprises of a minor degree like Fed-President Powell stated that there be no intention to ban bitcoin if released conducive in timing can influence the price as we have seen recently.

Sentiment, a sum of news over time evoking an investor’s sense of certainty or fear, can also be powerful.

Concerning bitcoin, with a constant flow of positive news releases like El Salvador holds 2.7 million BTC users, Brazil is planning to adopt bitcoin, multiple BTC ETFs are in the process of getting approved, and large investors like George Soros and Michael Saylor are stacking up in bitcoin can create price support. 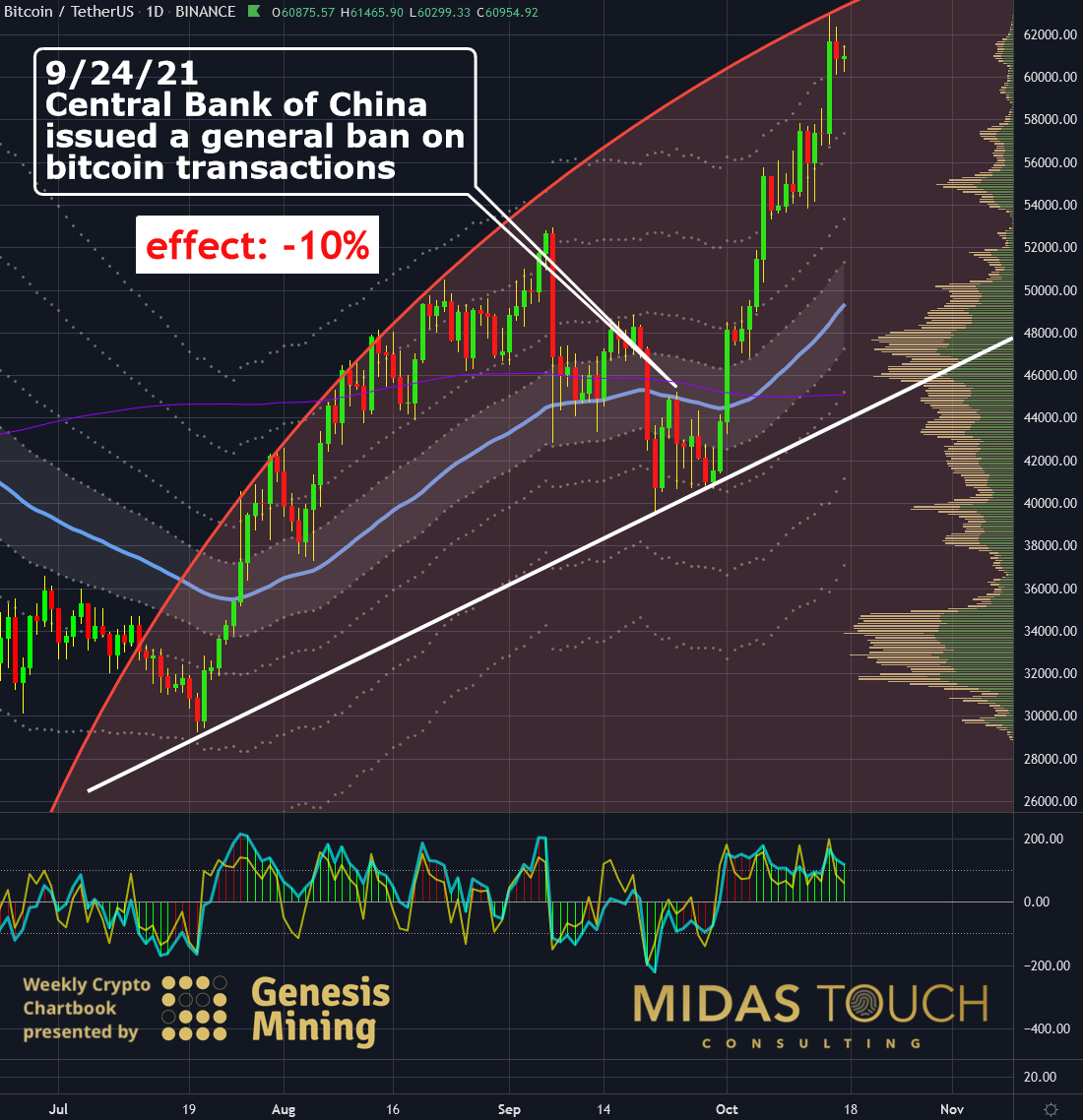 The Central Bank of China declared a general ban on bitcoin on the 24th of September this year. The market declined a modest ten percent. 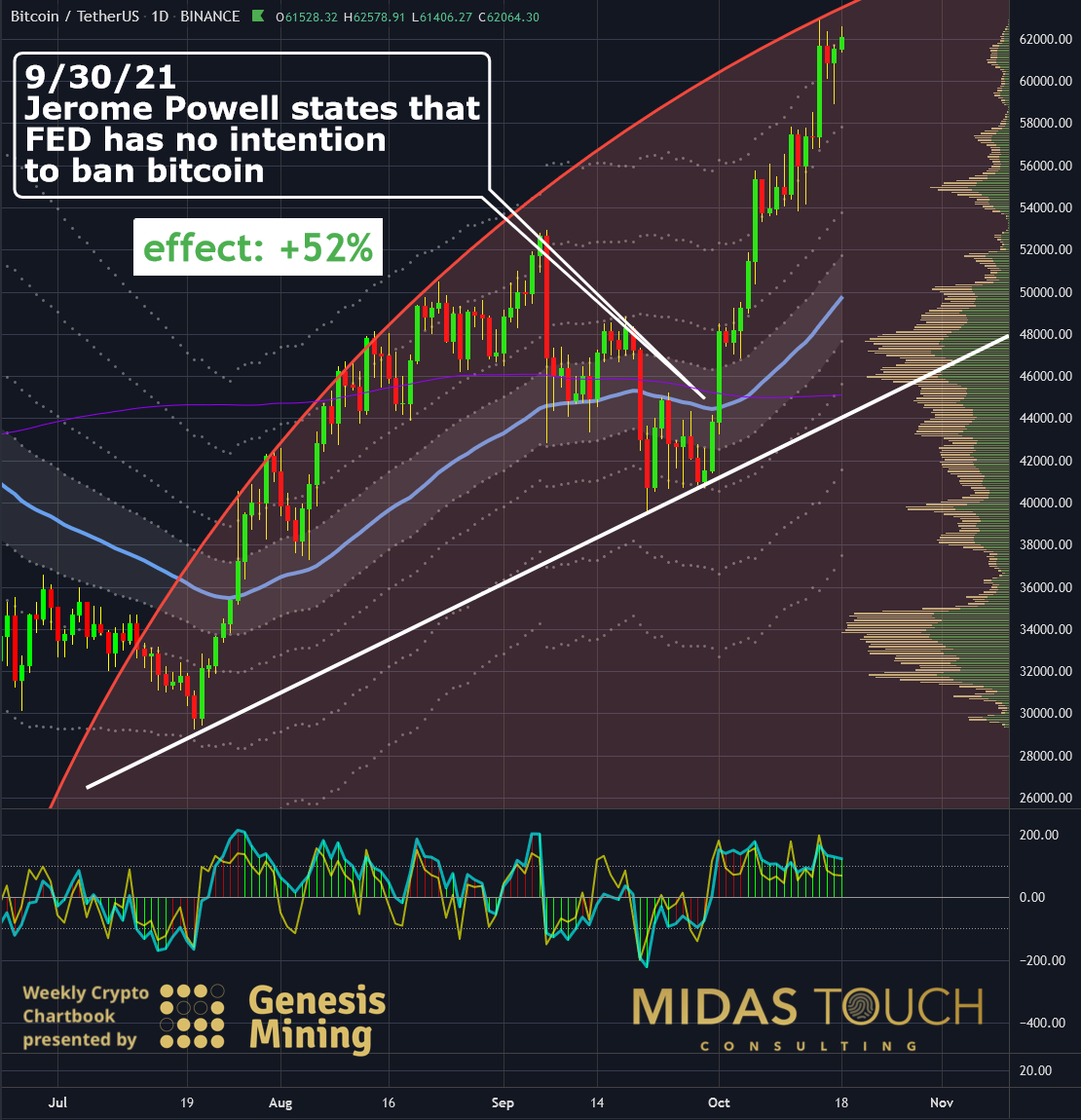 On the other hand, a week later, when House Representative Ted Budd had asked if it was Jerome Powell’s “intention to limit or ban cryptocurrencies, as we see in China”, the chairman declined such intentions of the Federal Reserve, markets soared. A daily time frame turning point was initiated, with a follow through all the way to a 52% increase. 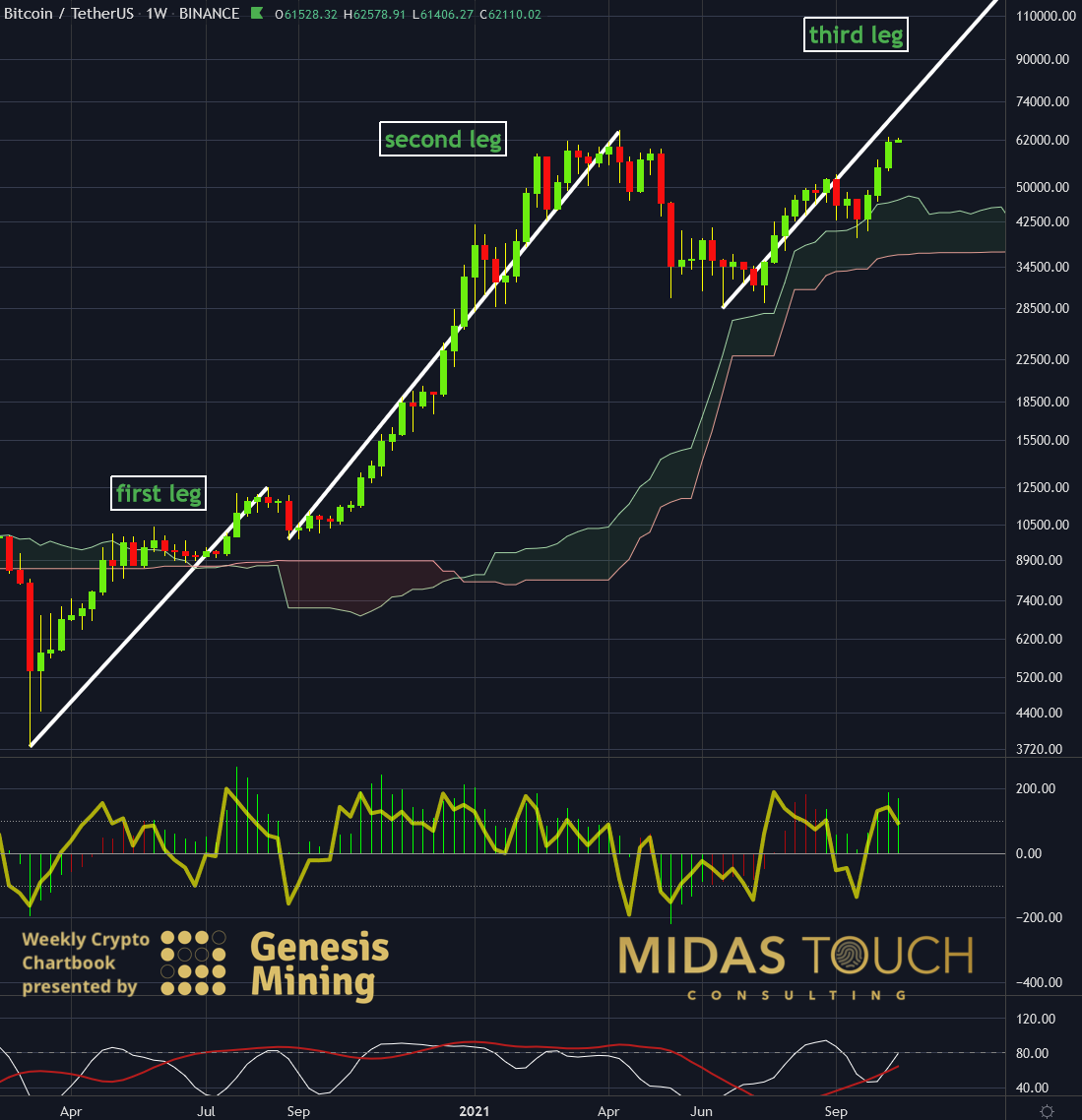 Another supporting news item for the sentiment was the President of Russia, Vladimir Putin, stating: “crypto-assets have the right to exist and can be used as a means of payment.”

The sum of positive sentiment lured the price to a double top (as you can spot on the weekly chart above). We find probabilities in favor that these highs will be taken out soon and that the third leg of this entire move most likely will reach six figures within the next four to five months.

A final look at the most meaningful monthly time frame supports the overall bullish tone. Even though it might look like a double top, we should see new highs. Should November close as a Doji (uncertainty bar), we might have to revisit these prognostics. As of now, bears are facing quite some buying pressure.

Bitcoin, the power of news:

Our minds are desperately seeking reasons for cause and effect, and news is like a relief to our market speculation. Unfortunately, acting on news releases themselves intuitively leads, in most cases, to losses. Where quick action is required is when news items are of true surprising nature to all. News items of unforeseeable disastrous consequences can immediately affect markets, but are typically rare in occurrence. Another set of news that is meaningful to an investor is a sum of news with the same polarity. Forming a sentiment within market speculators over time, this continuous news flow can support a trend. Consequently, this can be helpful to the trader. Once sentiment becomes extreme, the astute contrarian can use sentiment also as an early indicator on when to take partial profits and eventually fade this trend.