Your low-risk option is Bitcoin

Critics claim: “Bitcoin is very risky. A volatile, new market.” Nothing could be further from the truth. If you want a store of value to protect your wealth, it is other aspects you need to focus on. Why do we, in any other aspect, welcome innovation, the new, the efficient, but when it comes to money, we hold on to old paradigms that aren’t principle-based? Why are we so reluctant to change when a change, in this case, is so dire needed to protect your wealth? We will share the core principles on why your low-risk option is Bitcoin.

Short-term traders appreciate volatility. Bitcoin is liquid and not choppy. A long-term trader’s biggest fear is six sigma events. Consequently, any time the market is closed, more significant holdings are at risk of surprising news resulting in gap openings. Professionals go as far as to close out positions that are not in the green yet on a Friday after a trend-down day. The statistical fact is that on Mondays, market reopening, the downtrend is likely to continue. We have just recently witnessed that phenomenon in the flash crash of the gold market. They cannot take such weekend risks easily. With bitcoin trading 24/7, it is a much risk-reduced investment tool.

Any centralized instrument is attack-able. May it be by technology or legislative. We had times of gold being confiscated, even illegal to own.
In the recent trading behavior of the precious metal sector, we can see that it might not be wise to put all your eggs in the golden basket alone. 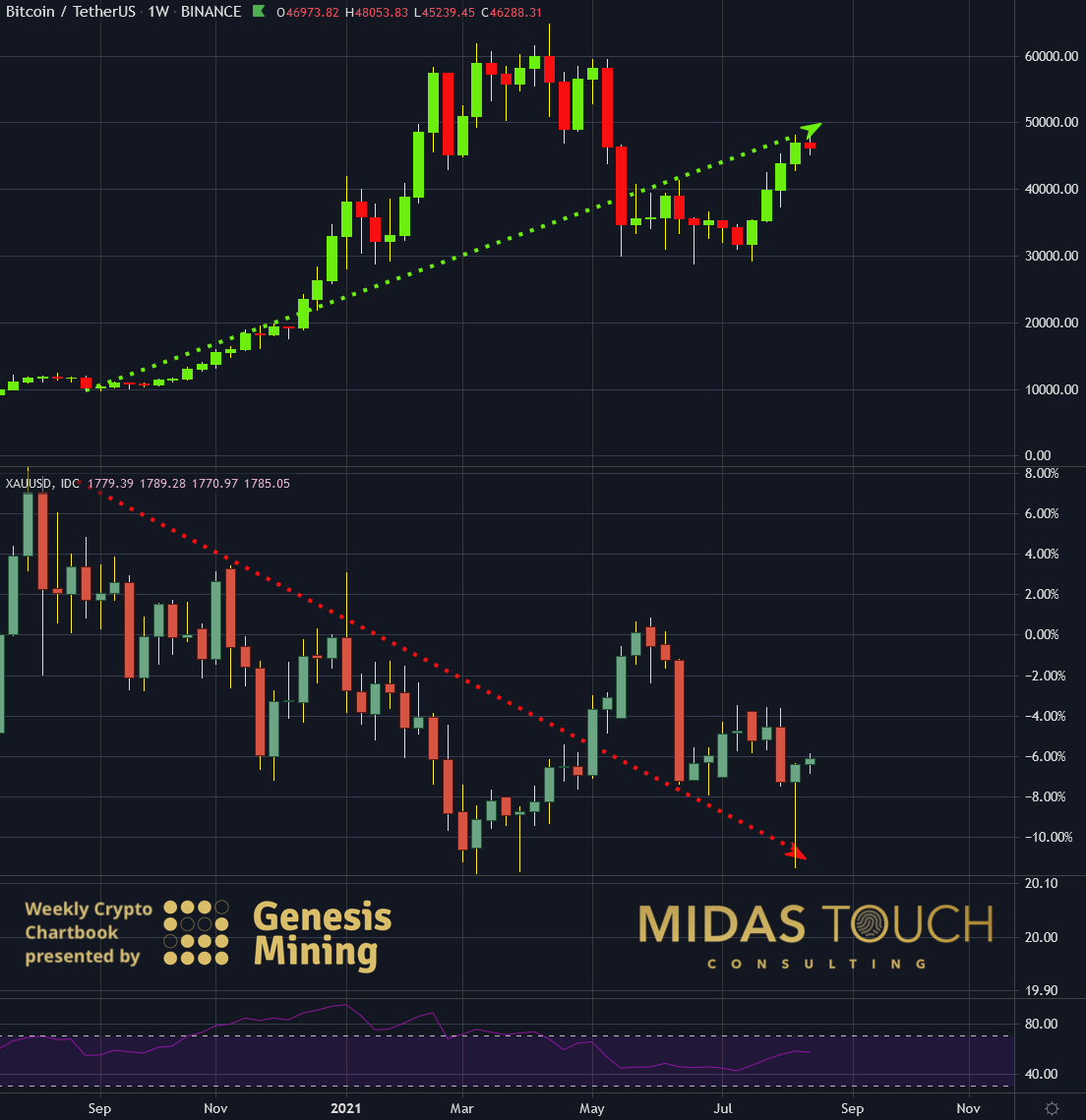 Like with everything else, it is wise nevertheless to keep an eye out for a few pitfalls. One of them being a misrepresentation of bitcoin measuring against a fiat currency. With fiat currency losing value, it is more accurate to compare against gold. The chart above shows how bitcoin gained strength towards gold and, as such, notoriety in its value. 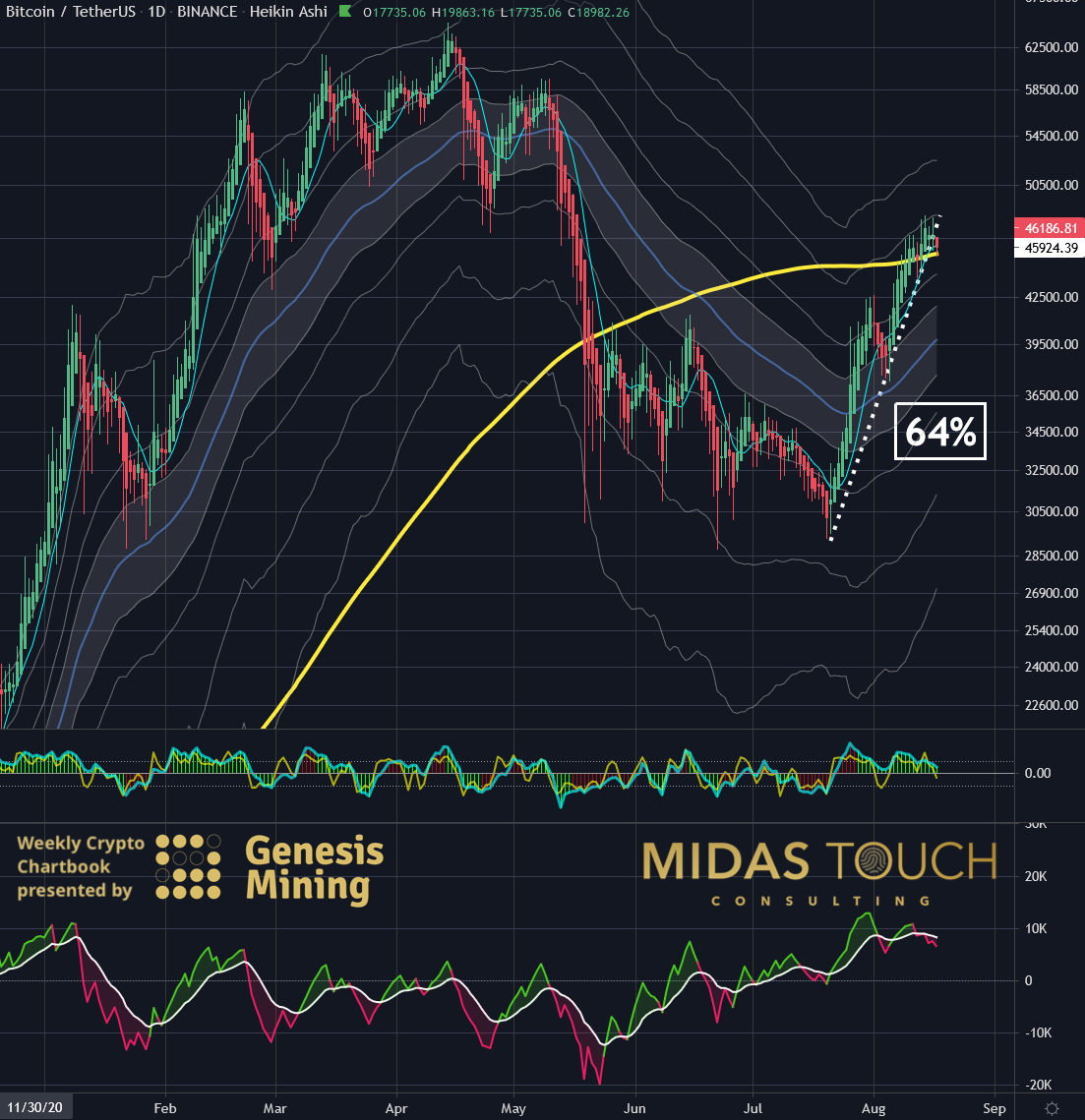 Another essential part of keeping bitcoin your low-risk wealth preservation of choice is adapting to its unique trading features. Bitcoin is deceiving with its significant retracements-grabbing stops for those too greedy, and once it turned it is hard to get in as bitcoin speedily advances steeply. What is essential here for the trader is not to be insisting on a time frame, but rather be on the lookout for a variety of time frames to find low-risk entry spots and profit-taking target zones.

It typically remedies what we call the emotional yo-yo effect. Market participants feel at ease when the bitcoin market declines to say to themselves: “I knew bitcoin isn’t worth a thing.” Days/weeks later, when bitcoin turned sharply and advances steeply, they find themselves in a state of a feeling of “missing out” in disbelief of the significant move they just missed.

The daily chart above illustrates bitcoins behavior in this aspect—quick steep advances represented in Heikin-Ashi charting format (color green). In addition, we can see on the standard deviation cloud indicator how bitcoin is compared to most other instruments, able to be suspended to extreme deviation for extended periods. The last turning point up produced a sixty-four percent move up in less than a month. 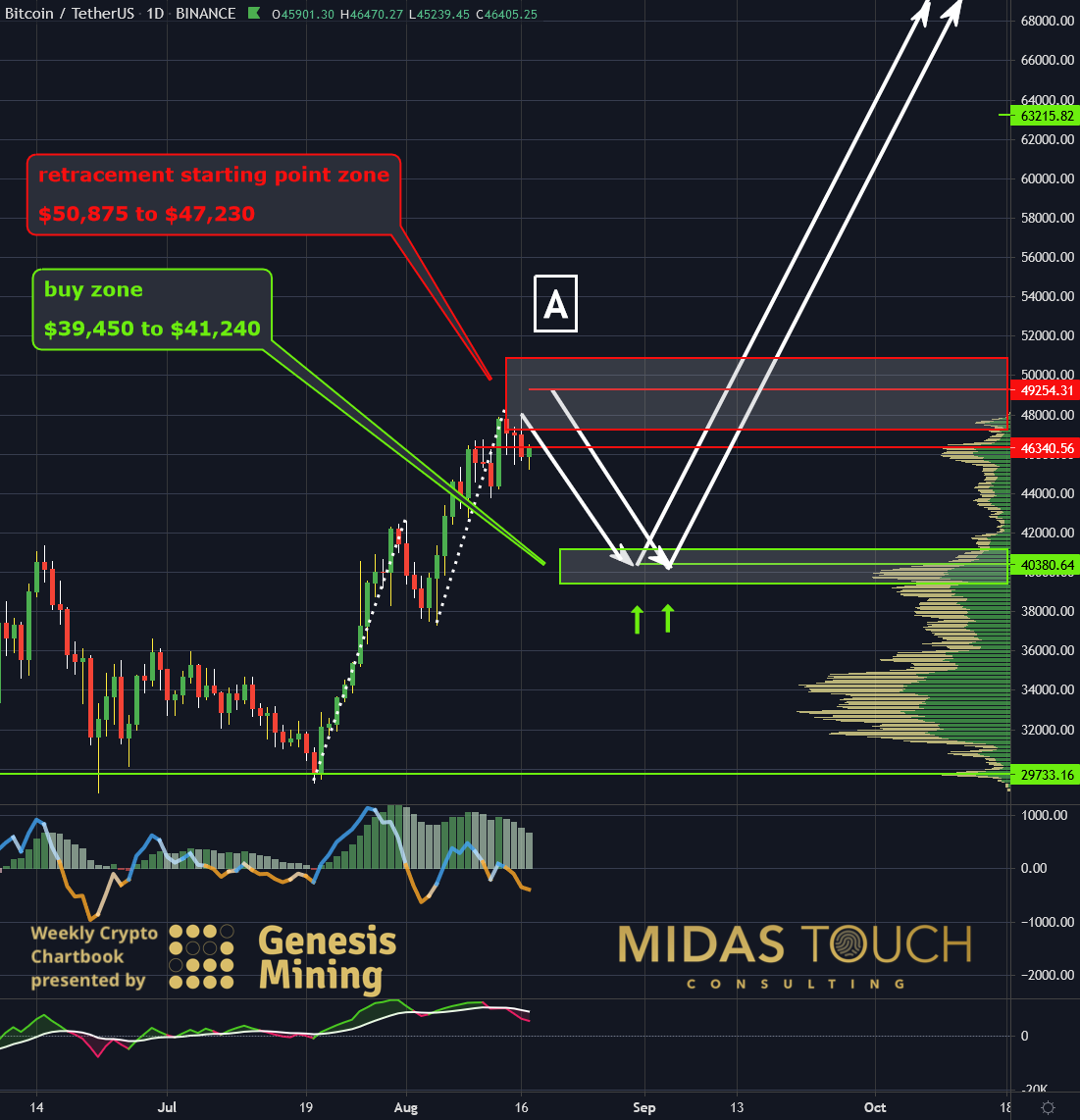 In our last chart book published, we posted a chart with various likely future price movement scenarios. Now, we are expecting a high likelihood of the second scenario of A (white line) to unfold. The daily chart above describes this scenario from last week now in more detail.
We enter a low-risk entry, at the supply zone of US$39,450 to US$41,240. The fractal volume support zone is only of interest to us, with prices declining from tops between US$50,875 to US$47,230.

Your low-risk option is Bitcoin:

Bitcoin, which by the way, is not that young of a market anymore, gets a low rap also because it caused a whole movement of other seemingly decentralized altcoins. At the mass internet adoption, we have seen a similar effect with penny stocks that went to zero, giving fuel to critics. Thirty years later, we do not have to ask you if the internet itself is of value. We see the first steps in motion of a mass adoption of bitcoin as well. Your risk is now listening to critics’ unfounded doubts over facts that point clearly to a future with a very high probability of bitcoin taking a central role in the financial market worldwide.