Why Bitcoin will win

Long before mankind minted coins and then printed money, we were forced to find means of exchange once barter over larger distances was required. Mankind invented all sorts of “commodity money”, from fish to leather, grains to metals, salt to ivory, precious stones to shells, cacao beans, and so forth. And mankind benchmarked these commodities against five cafeterias. Money needed to be:

Now we have left to a certain degree these ways of value exchanges, but if you think of it, especially in times of turmoil, wouldn’t we precisely long for a monetary way that satisfies these five principle criteria? Why Bitcoin will win.

If we take Fiat currencies with their centralized position, but faith in the government waning, the scarcity benchmark is quickly fading through continued printing of monies. Precious metals start failing the divisibility benchmark with an ounce of gold trading near US$2,000 and possibly much higher. Should the government create their cryptocurrencies, they will be new and not pass under the “easily recognizable” benchmark. Bitcoin on the other hand passes the litmus test. Bitcoins are portable and fungible. Their smallest unit is a satoshi and 100 million satoshis are equal to one Bitcoin, meaning they are divisible into small units. Bitcoin came into existence on January 3rd, 2009, and as such is recognizable. Bitcoins are limited in their supply at 21million and as such are scarce.

BTC-USDT, Monthly Chart, Just as planned, Why Bitcoin will win: 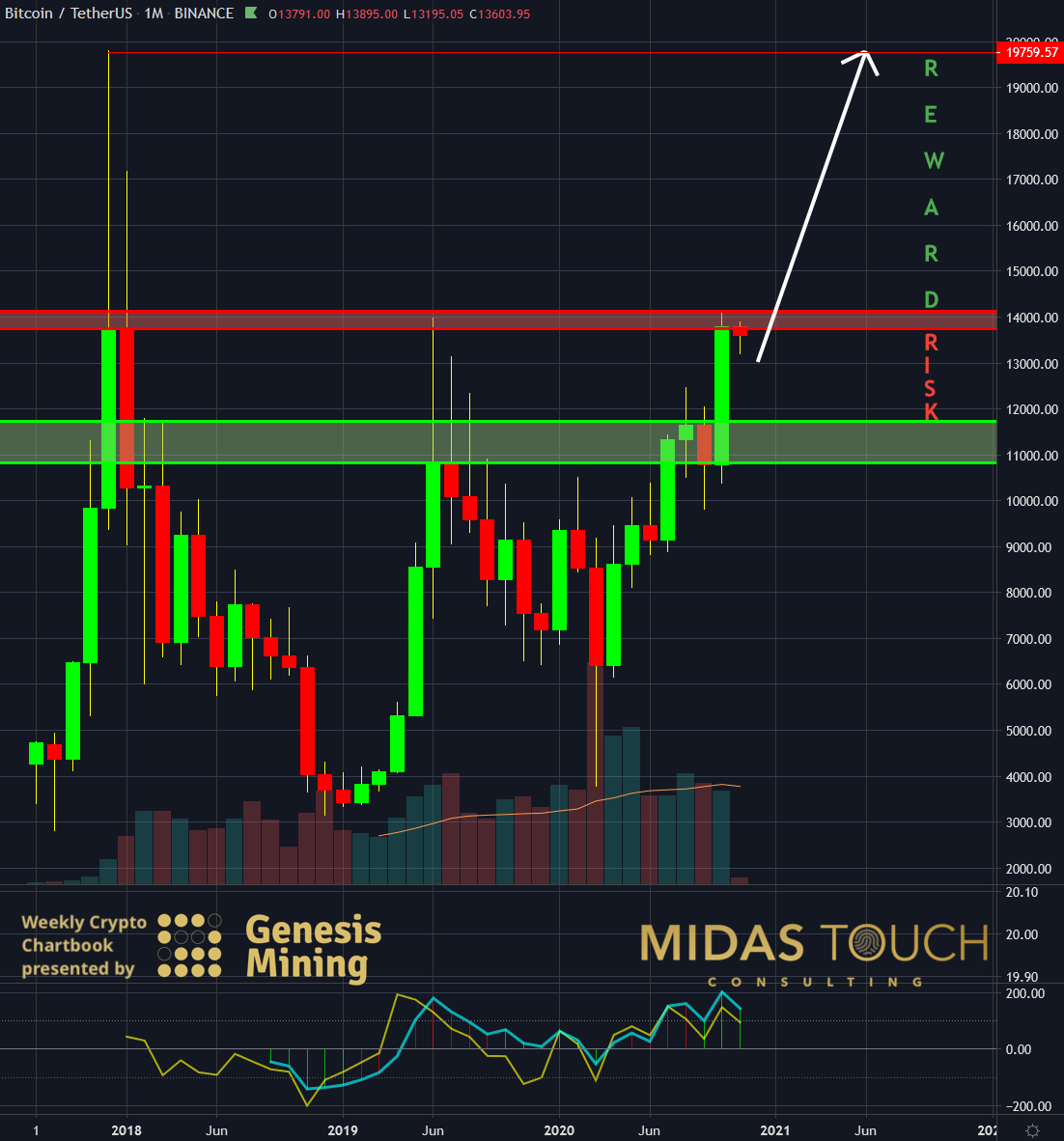 We posted in our last week’s chartbook the chart above. Alongside with quotes like “bullish as can be”, “Looking at the chart above we see nothing but strength”, “Pushing now for the third time against resistance (14k zone) and as such weakening this hurdle, we see a good likelihood of a further price advance. Healthy volume figures support that view”.

The market has lived up to this prediction. We have penetrated the 14k level! 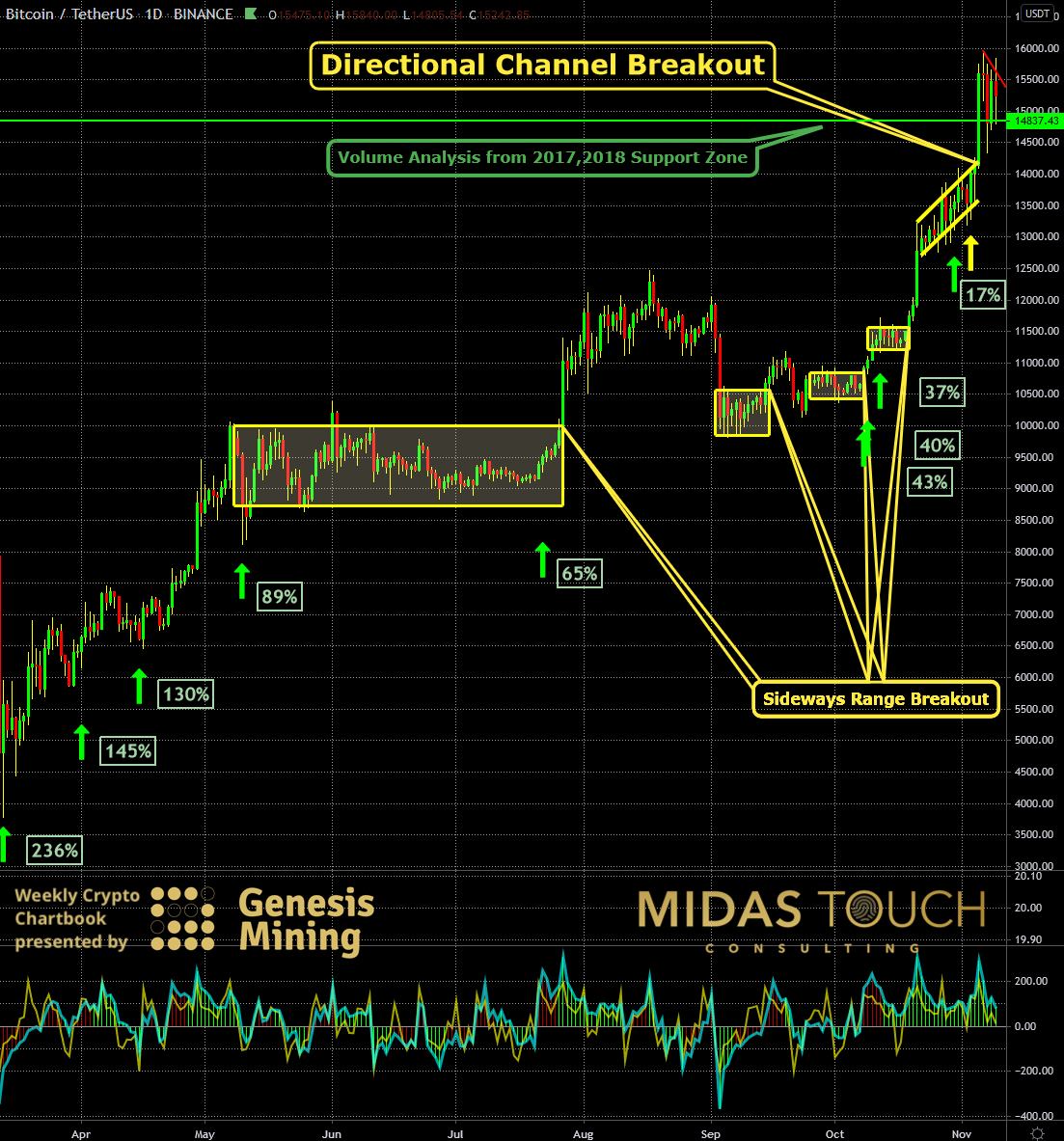 The daily chart above shows how we were able to participate in this scenario without increasing risk. Breakout trades after already extended moves are anything but low risk. The whole world sees big levels like this and battles at these supply zones can gobble up the smaller trader easily in regards to risk control.

The green arrows represent earlier trade entries which we all posted in real-time (entries and exits) in our free telegram channel. With our quad exit strategy, we take partial profits but leave runners (25% of original position size) exposed to the market that maximize profits on those extended moves. The percentage numbers next to the green up arrows represent assumed runner profits assuming a US$15,500 price level.

It is these extra profits that hedge an attempt to take on a smaller position size trades in these more risky zones. That being said we took one more entry on 11/3/20 as an anticipated breakout trade (yellow up arrow). Consequently adding to our exposed runner winnings.

We always orient ourselves on support zones from previous volume nodes. In this case, volume analysis from a fractal last produced at the highs of 2017 and 2018 shows support near the US$15,000 price zone.

Looking at the chart you may recognize a range decline through time (yellow boxes) which indicates health of a trend. When you see a progression from sideways channel breakouts to directional channel breakouts, the first warning sign is in place to lighten up on your exposure. When the crowd wakes up and is thinking “entries”, professional traders think”exits”. In extended moves, it is time to take partial profits. 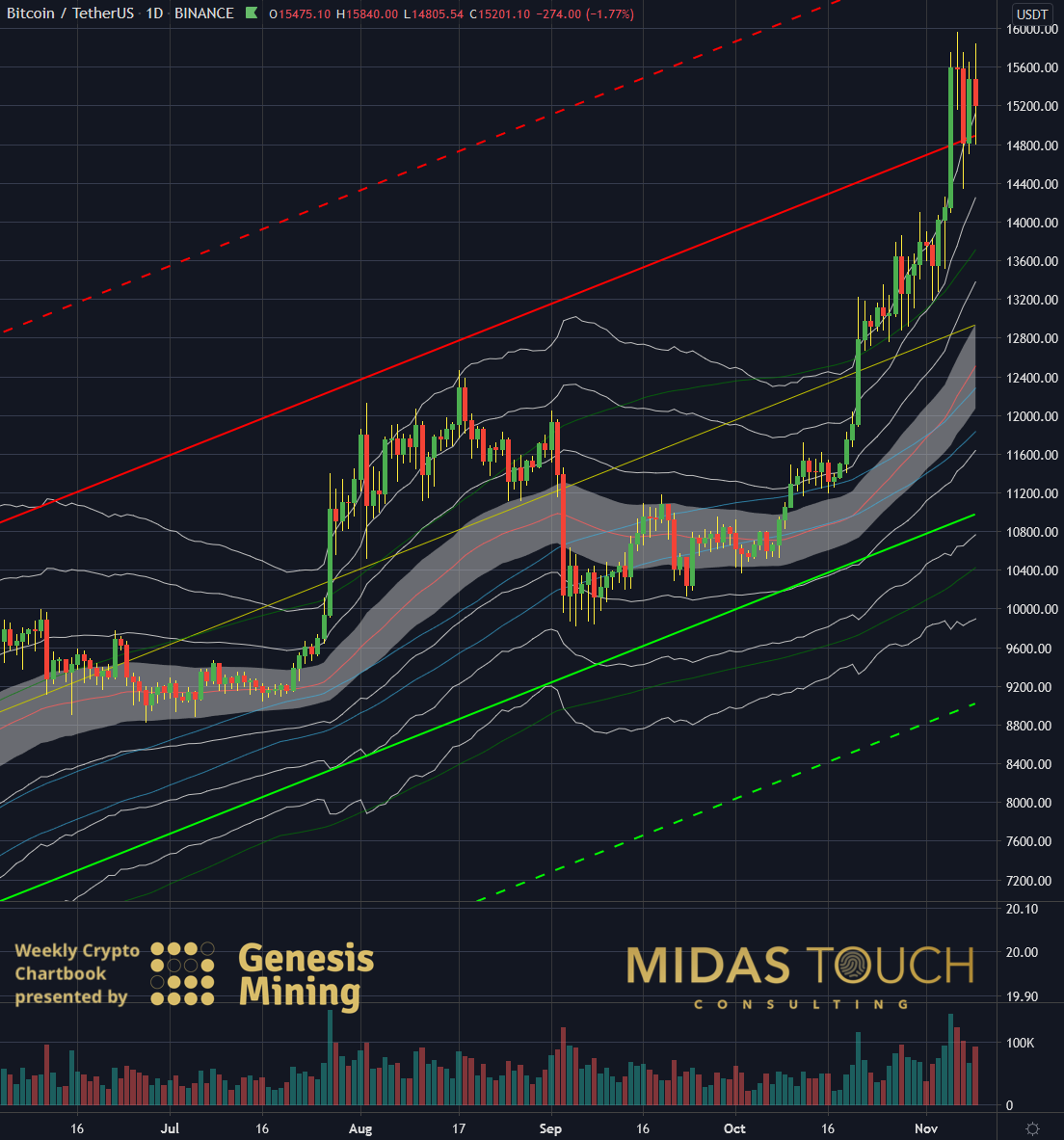 From a daily perspective, we have now stretched into a standard deviation value (grey lines) that is unsustainable. In addition we are at an oversold area of the linear regression channel as well(directional red line). As such we have reduced position size and are carefully planning much smaller in size trades.

Why Bitcoin will win

Why we strongly believe in Bitcoin’s prosperity is its perfect fit to what seems to be missing in today’s world. Where commodity monies fail is in their durability. A bad cocoa bean crop or the discovery of a new precious metal mine strongly influenced commodity barter in ancient times. All fiat currency based systems finally ended in hyperinflation. Bitcoin just occupies that niche to withstand modern demands of a form of exchange of value but also benchmarks against the fife principle criteria that worked for thousands of years very well from a practical and psychological perspective. The trading behavior of Bitcoin over the last ten years in the aspect of its response to world monetary scenarios more and more confirms this fundamental view as well.