The Bitcoin train left the station

Newton’s law that an object in motion stays in motion applies to trends in the markets and as a fundamental principle as a whole. In our view, bitcoin is in motion for quite a while now, and more and more sub-trends emerge supporting bitcoin’s momentum. Regulators could wipe out altcoins, but we see no scenario where bitcoin could be eradicated. Daily news is like mushrooms sprouting of bitcoin adoption around the world. The Bitcoin train left the station.

Some of these sub-trends are:

So, governments, banks, and corporate businesses are in. Who does that leave out?

BTC-USD, Daily Chart, What is the holdup? 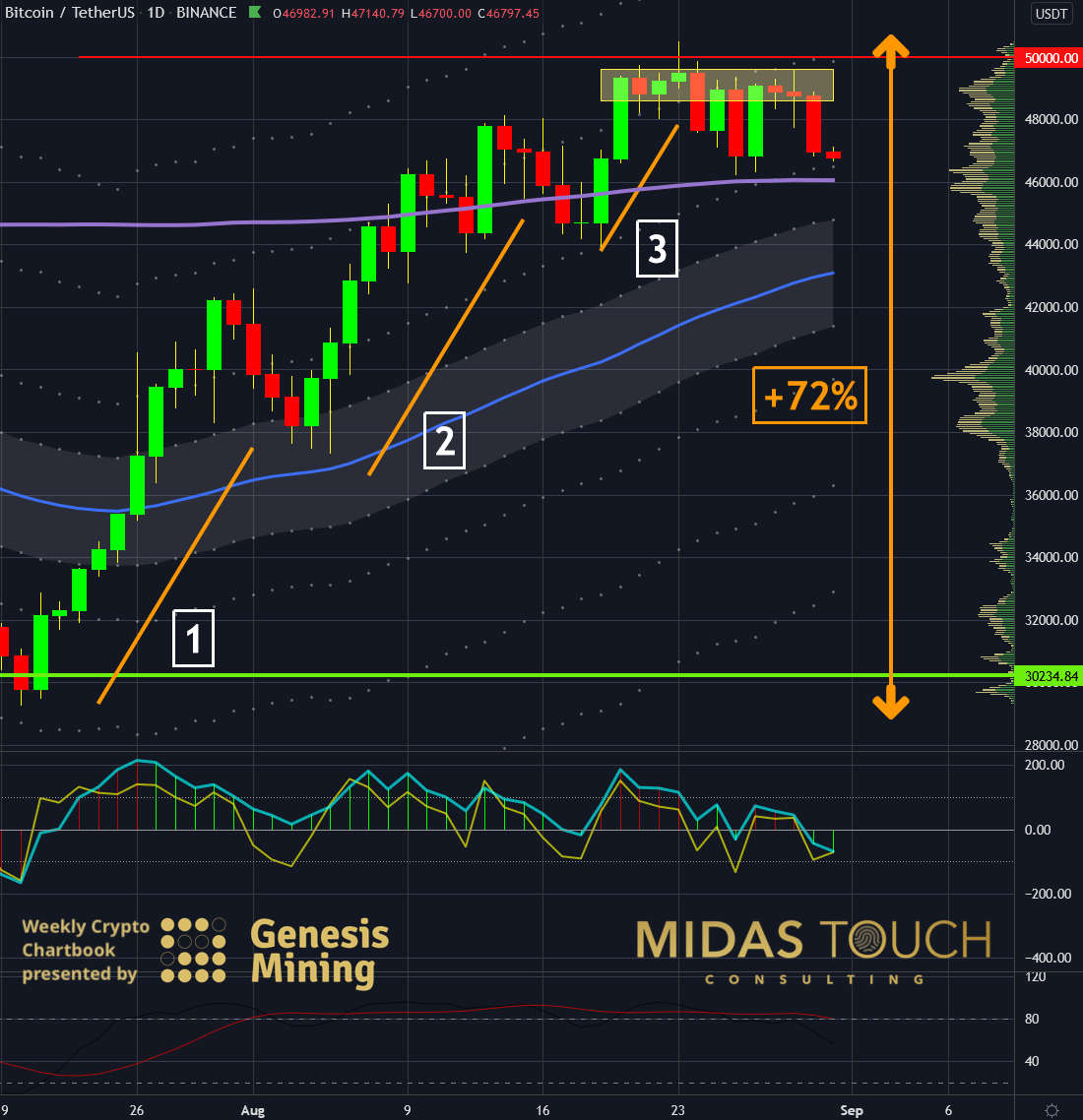 In charts as well, it can be observed that participation has changed trading behavior. After three legs up and a 72% up move, bitcoin, as seen in the daily chart above, is not getting rejected from the big 50k mark. With an eye on the yellow box, one can see that despite the extended move, multiple tests of the highs, and a resistance zone based on transactional volume, bitcoin clings to the top of the range for a mere eleven sessions. Any bear attempt so far has been met by a counterattack of the bulls. It is a far cry from typical bitcoin trading behavior. 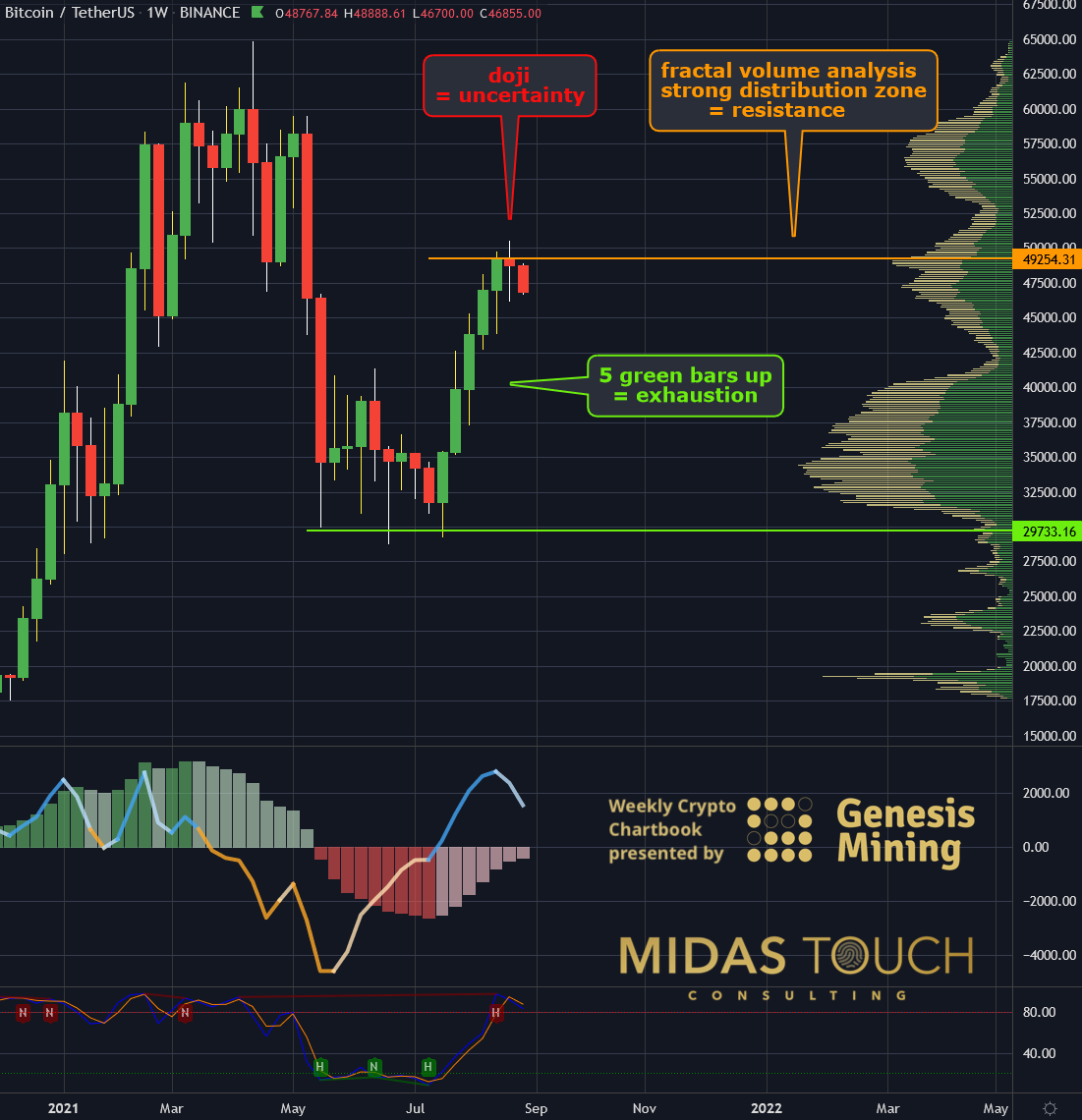 Stepping up a time frame, we see a different picture. After five consecutive steep green bars up, a Doji formed that typically is a breather and a sign of uncertainty. Consequently, it invites bears to step in aggressively for a low-risk entry to push prices quickly lower. Especially noteworthy is that a fractal volume analysis (green histogram to the right of the chart) provides for a strong distribution zone at US$ 49,250, typically an edge bears to lean on as a support for their efforts to push prices lower. All in all, typical behavior of bitcoin in a situation like this, but much slower than usual. 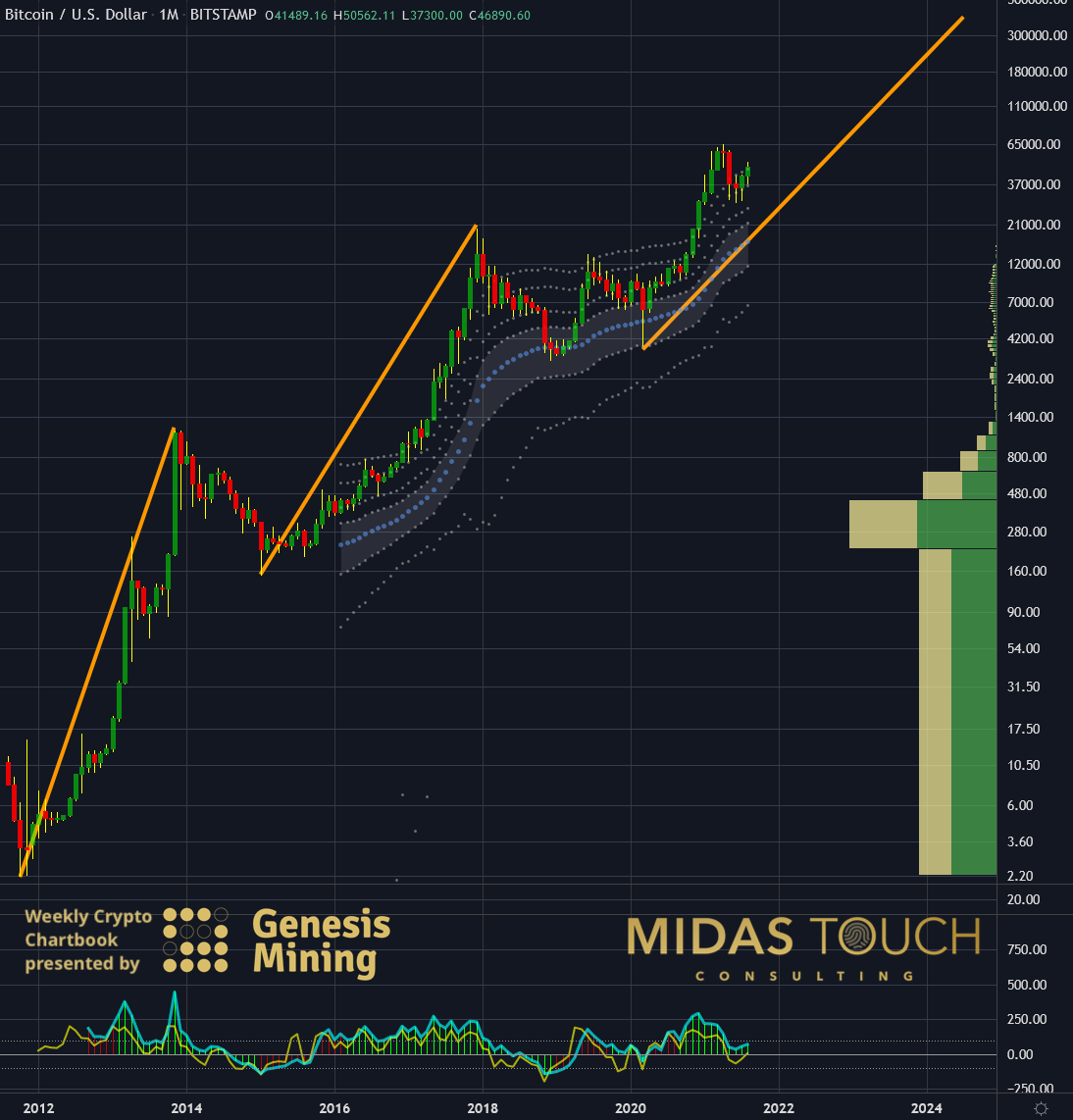 Again zooming out to a larger time frame, the monthly one, we can see that bitcoins latest up-move over the last year and a half has merely produced a single initial leg. After a minor retracement, we are starting to form out the early stages of the second leg right now. Consequently, the underlying bullish tone in lower time frames is natural.
We have chosen a logarithmic chart presentation for a better representation of the actual percentage moves. Consequently, we can make out that, measured by past performance (orange directional lines), a projection for a much higher price level is to be likely.

The Bitcoin train left the station:

Speculators bought at US$3, professionals at US$3,000, and big business at $30,000. This train is in motion now, and it would take a powerful force to stop it. More likely, it will stop at fewer and fewer train stations and become harder to board from both a psychological and trading perspective. Do not wait for this to turn into a bullet train with fewer low-risk opportunities.