Gold – The Decision Is Close

Since 3rd of September, gold and the SPDR Gold Trust ETF (GLD) have been consolidating for nearly two months and now seem to be getting ready for the next move higher! With the breakout of the triangle a first bullish indication is on the table. After next week’s FED decision gold should provide a clearer picture. If gold can move above US$1,520 the next leg up has a potential price target of US$1,800 by January or February 2020. Gold – the decision is close!

Since the 3rd of September, gold and GLD  have been in a corrective phase, which has so far mainly led to a shift away from a clearly trending and directional market towards a confusing and difficult sideways market. Even though the gold price corrected from US$1,557 down to US$1,460, compared to the previous advance this correction has been rather mild so far.

And after an initial sharp rebound to nearly US$1,520, gold has been trading sideways between US$1,480 to US$1,500 over the last three weeks. The daily trading range had become significantly smaller and accordingly volatility has been on a decline. With prices moving sideways, a clear trend has been missing. Presumably, this might have been only the calm before the storm. As of Thursday, gold started to break out of its triangle and moved above US$1,500. Friday’s rally towards US$1,517 however was not sustainable and gold closed right at the edge of the triangle. 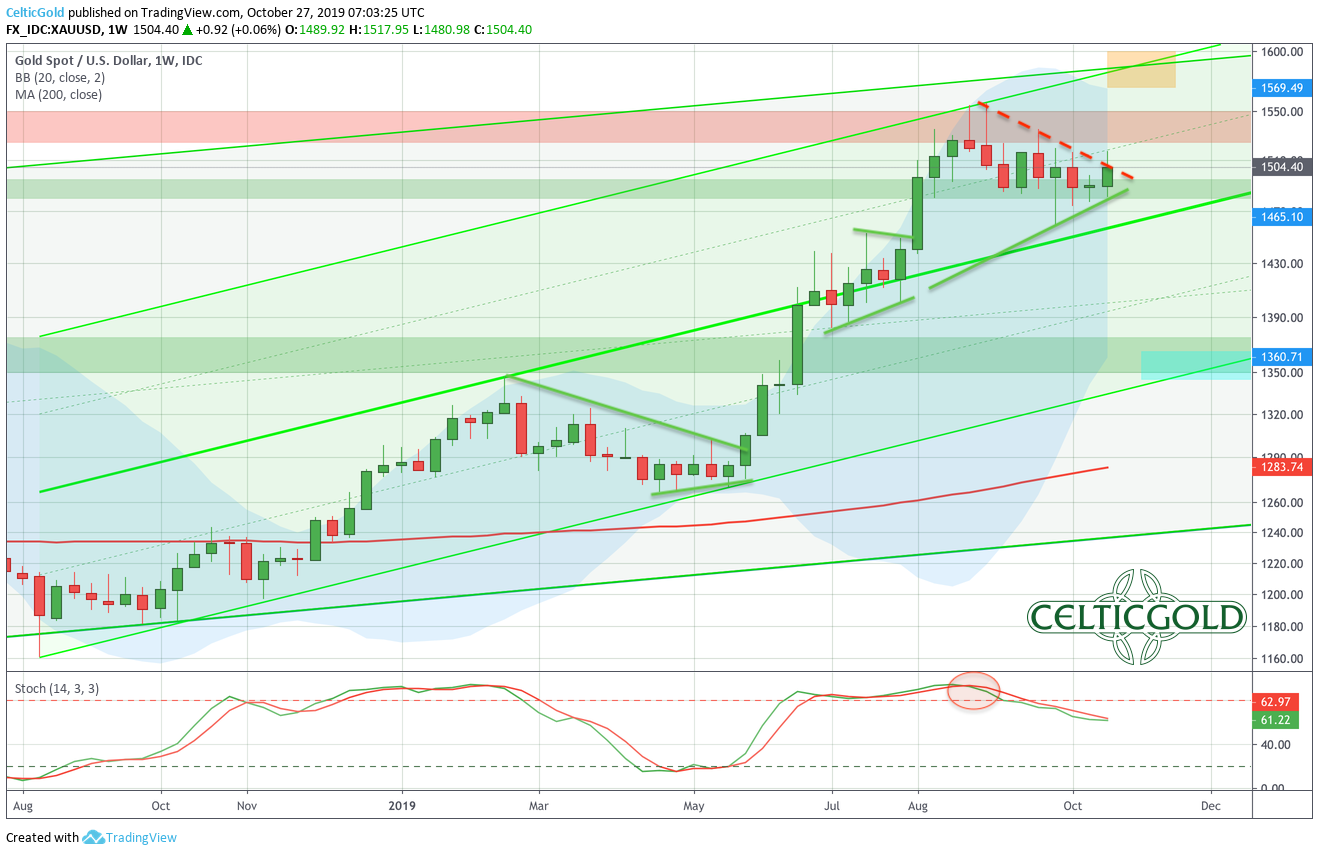 On the weekly chart, since August 2018 gold is moving within a major uptrend channel. This channel currently offers space up to around US$1,585. On the downside, below US$1,460 prices would slip into the lower half of the trend channel. The July consolidation took place just around the middle trend-line of this channel. Actually, this trend-line should hold for the next few months and catapult gold prices higher.

Due to the pullback in recent weeks, the overbought position in the Stochastic Oscillator has been neutralized. A clear new buy signal is not yet available and theoretically, the oscillator still has plenty of room to the downside. A counter-cyclical opportunity is therefore certainly not present in the gold market. However, the current setup allows for a new multi months rally. The potential cup & handle formation I present the last time is still possible and could bring spectacular gains in the next few months.

In conclusion, the weekly chart is still “slightly bullish”. The next price target is US$1,585. 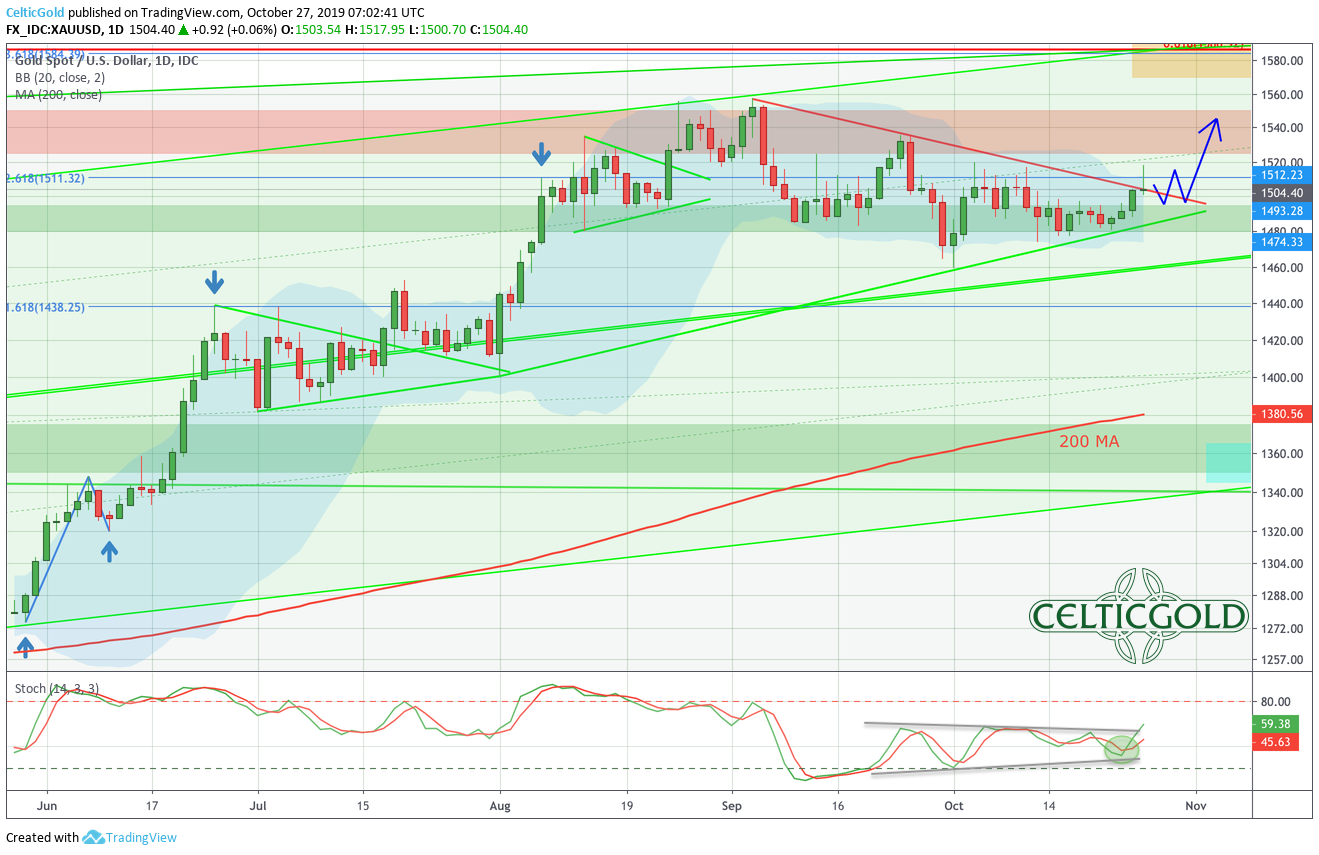 On the daily chart, a symmetrical triangle has developed over the last few weeks. The shrinking trade range is a typical behavior as the prices move into the apex of the triangle. At the same time, the Bollinger Bands continue to contract, while the stochastic oscillator also consolidates sideways in a triangle.

Friday’s breakout presented the explosive move out of the formation. The established uptrend coupled with various other bullish factors made a breakout to the upside more likely. As this breakout happened late in the triangle apex though, the move does not have to be very strong. And in light of the upcoming FED meeting on Wednesday, gold could still dip one more time back below US$1,500 before starting its next wave higher towards US$1,585.

If, on the other hand, bears prevail and can push gold prices below $US1,480, the middle line of the uptrend channel (around US$1,460) should come into focus rather quickly. Also, a further drop towards the rising 200-day line (US$ 1,378) becomes very likely in this case.

Even though Friday’s price action has been a bit doubtful, the daily chart is slightly bullish too. If the bulls can push prices one more time above US$1,510 and then even above US$1,520 gold is back in bull mode. Below US$1,480, and especially below US$1,460 however, bears will take over.

Commitment of Traders: Gold – The Decision Is Close 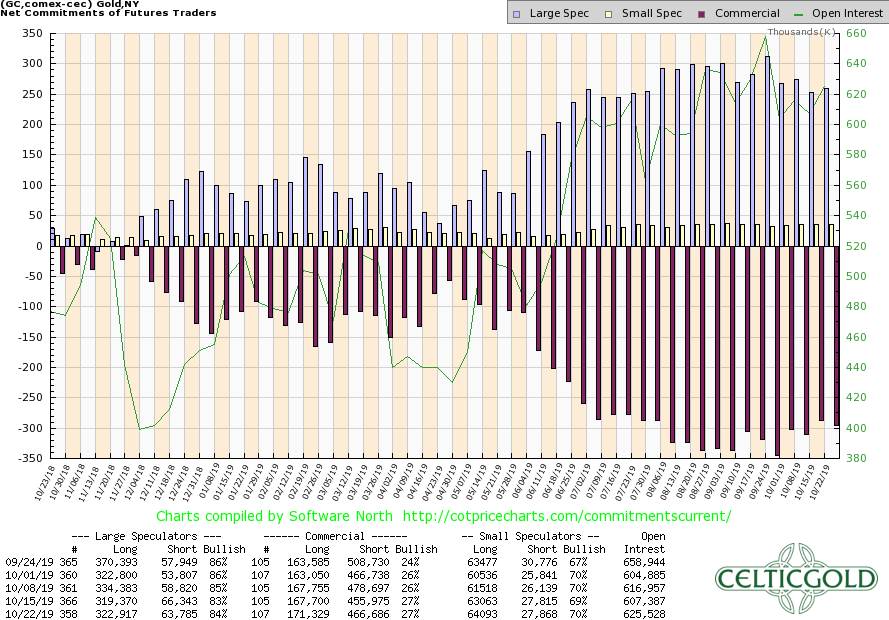 Commitment of Traders for Gold as of October 26th, 2019. Source: CoT Price Charts

So far, the Commitment of Trades structure has only slightly improved during gold’s recent correction. The commercial hedgers reduced their cumulative net short position by just under 16.5% from 345,145 down to “only” 288,275 gold futures contracts. Overall, however, this short position is still dangerously high in the longer-term comparison and sits clearly above the healthy average. Sooner or later the professionals will want to make a profit here for which they will need much lower gold prices.

On the other hand, the large speculators (primarily trend-following hedge funds) took only small profits despite the massive rally since end of May. Only if the commercial hedgers succeed in arranging a large sell-off in the gold market will the large speculators be forced to sell their positions due to triggered stop-loss orders or margin calls. So far this has not (yet) been the case. Especially the string physical demand from the various gold ETFs has held up the market well. We can assume that the gold prices would only start to slide at prices below the last low at US$1,460. 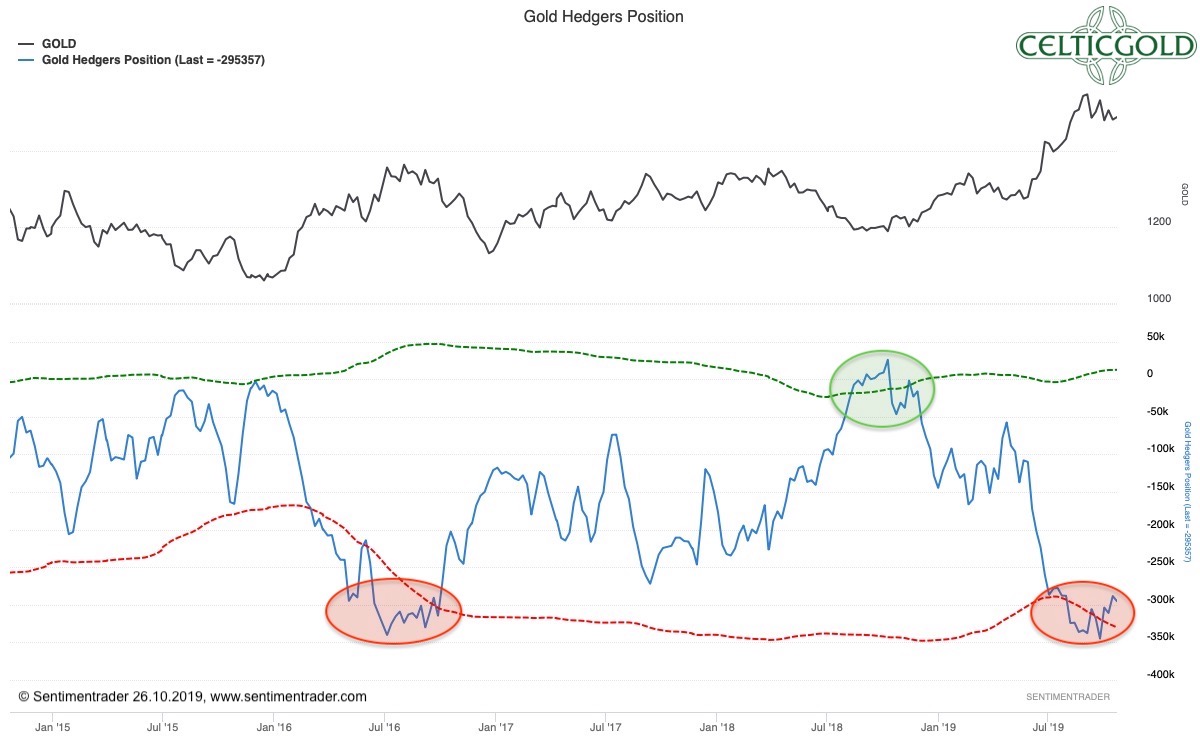 Commitment of Traders for Gold as of October 26th, 2019. Source: Sentimentrader

Alternatively, the commercial traders have to sit out their short positions for a longer period of time. Because of their deep pockets, however, they can do so without any problem for many months.

Overall, the CoT report continues to deliver a clear sell-signal. Admittedly, the CoT report is not a good timing tool to detect short-term reversals. Often buy or sell signals based on the CoT report can last for quite some time before the market actually starts to move in the appropriate direction.

Sentiment: Gold – The Decision Is Close 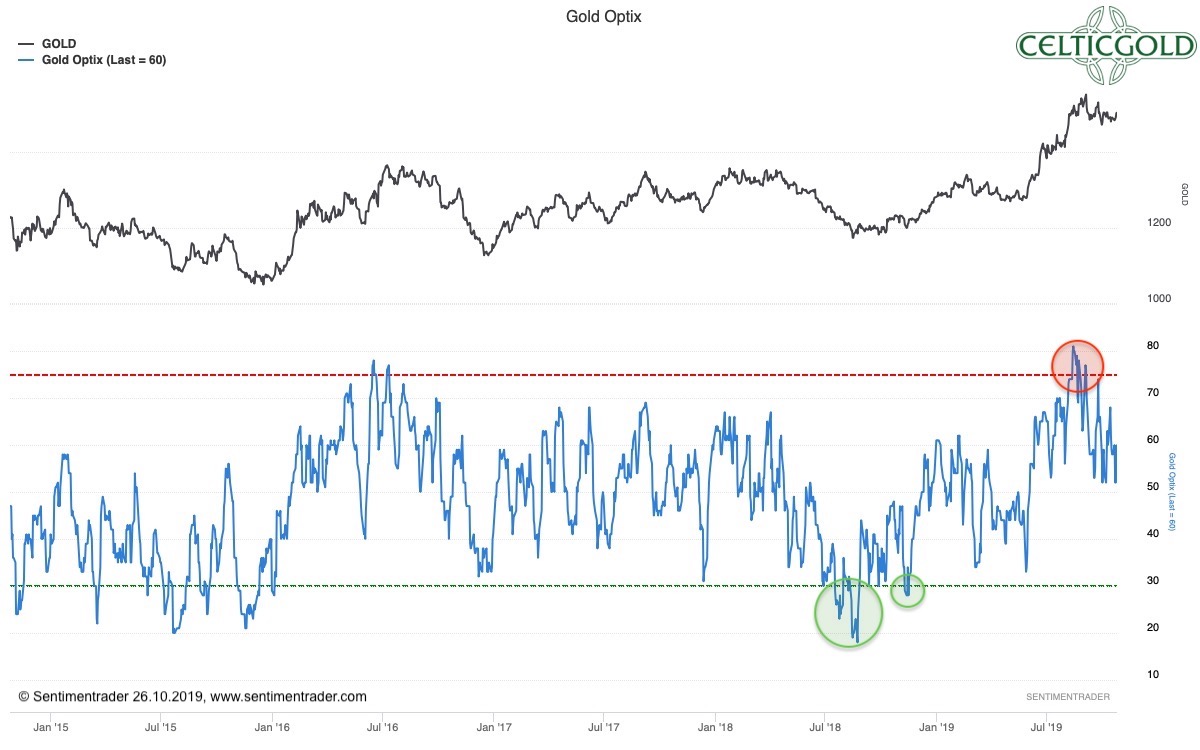 Sentiment Optix for Gold as of October 26th, 2019. Source: Sentimentrader

The current sentiment data provide a more balanced or almost neutral sentiment for the gold market. For example, Sentimentrader’s sentiment index ranks in the middle of the mood scale with 60 out of 100 possible points.

In summary, the sentiment analysis currently comes to a neutral conclusion. By contrast and in the big picture, the precious metals sector is far away from any euphoria similar to 2010 and 2011.

Seasonality: Gold – The Decision Is Close 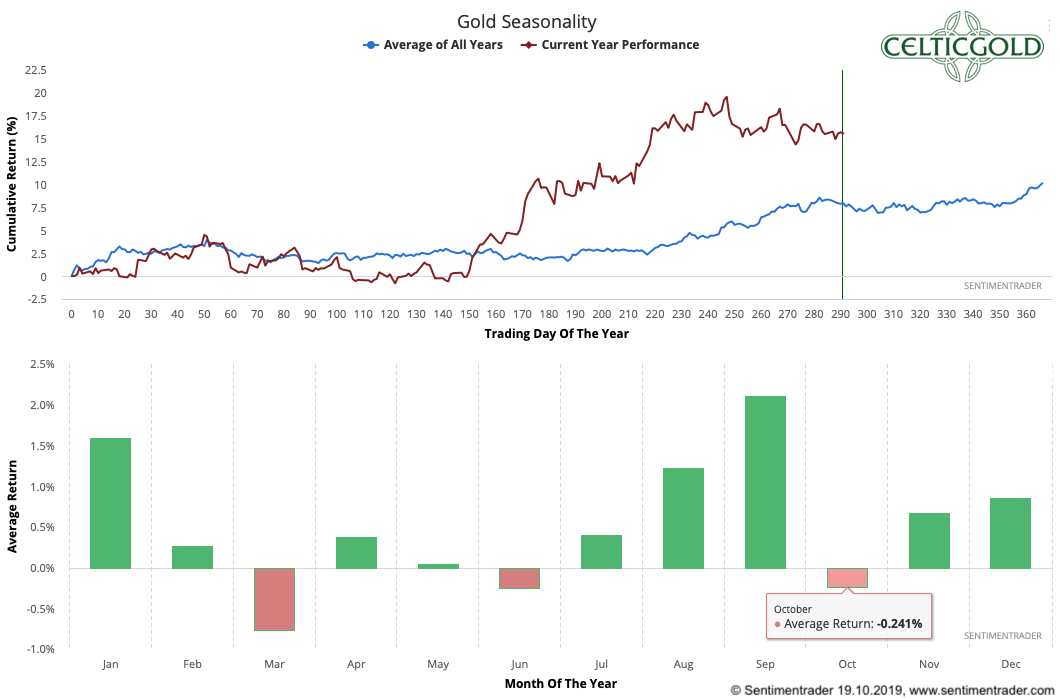 Seasonality for Gold as of October 26th, 2019. Source: Sentimentrader

Looking at the seasonal cycle, gold is now entering its second-best phase of the year! This bullish cycle usually begins in early or mid of October and lasts towards mid or end of February.

Based on the statistics of the last forty years, Seasonality provides a green signal for the next four months and should be more supportive for gold. However, in February or latest March 2020 the seasonal pattern does roll over as gold usually starts a correction in early spring. 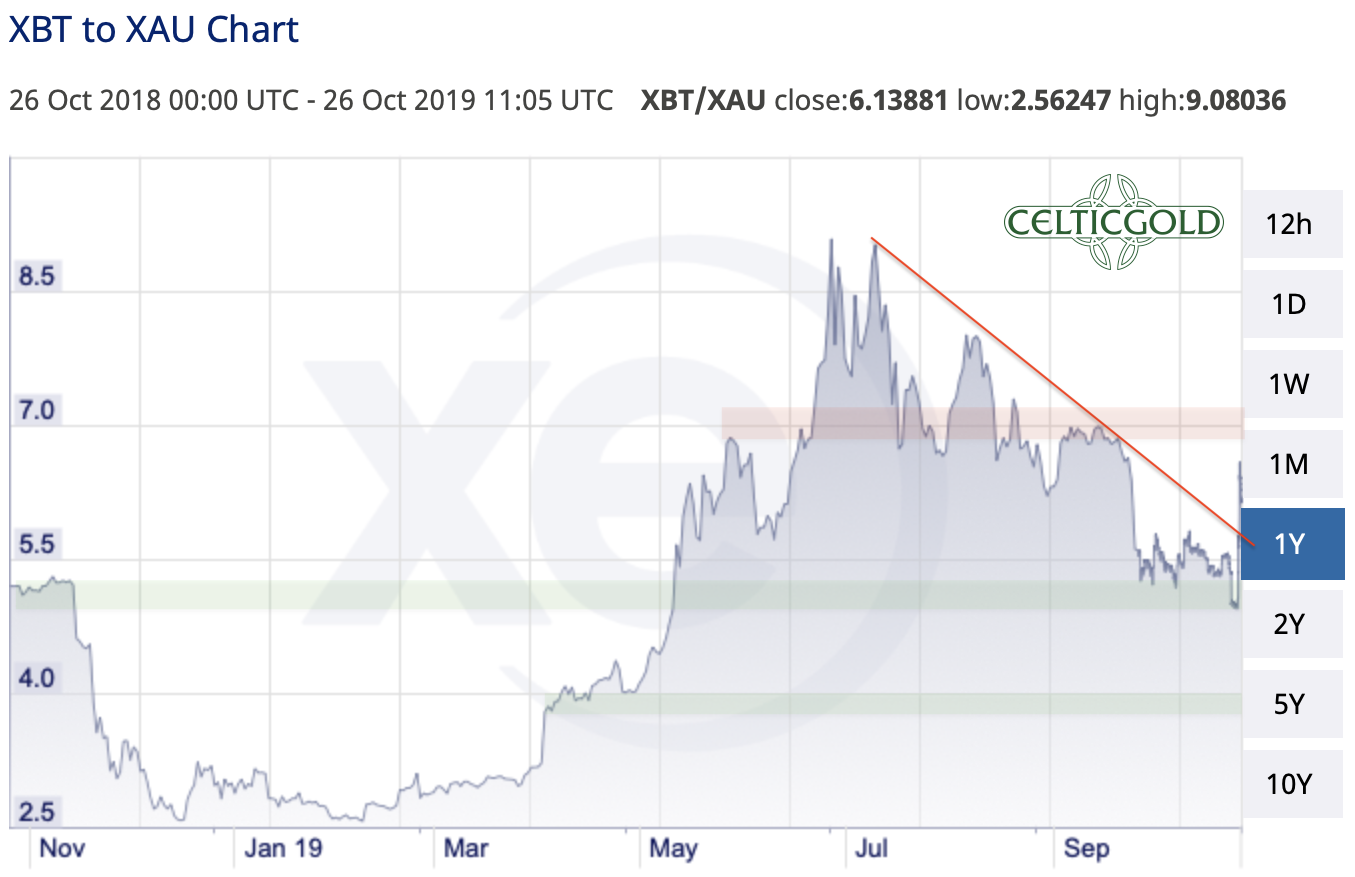 With Wednesday’s mini crash in bitcoin below US$7,500, the ratio between gold and bitcoin shifted further in favor of gold. With Bitcoins short squeeze on Friday however the ratio shot dramatically higher. Now 1 bitcoin costs 6.14 ounces of gold. In other words, you currently have to pay around 0.163 bitcoin for one ounce of gold.

Since our recommendation in late June/early July to overweight gold against bitcoin, the situation has now reversed. Below US$8,200, Bitcoin is now in the accumulation phase. And as the downside risk in Bitcoin is rather shallow (worst case possibly still down to US$ 6,200), a gradual and step-by-step overweighting of bitcoin against gold seems to make sense now.

Over the last three weeks, the price of gold has hardly moved! Until the FED´s interest rate decision this Wednesday expect a confusing and unclear picture. But this should only build even more pressure for the next big move as the narrow trading range will certainly not last forever.

The direction of the next sharp movement initially is unclear, however, the bulls have the better cards. This is mainly due to the established multi-months uptrend and the slightly bullish daily and weekly charts. As well you can argue that after a 14 months rally in the gold market, we are still missing the final parabolic explosion that usually brings the end to such a complex up wave.

This is not to say that gold’s bull market will end with such an overshot. But it should bring the necessary multi-months correction starting in spring 2020 with a pullback towards US$1,500 and later US$1,350.

Short-term, a clear indication that the rally is going to continue will now be a move above US$1,520. At the same time, prices below US$1,480 would be increasingly bearish. Below US$1,460, gold will likely slide towards US$1,400 and even lower.