There are currently many people all over the world who still have no access to an uncensored internet. In order to tackle this big issue, the Substratum foundation started their project in 2017. Their goal is to build a decentralized web and to give people around the world the opportunity to access the whole freedom of the internet.

By running a Substratum node, users will be able to access the normal uncensored world wide web, no matter where they are currently located. Additionally, there is an option to run a website on the Substratum network, which is completely decentralized. Moreover, people who run a node will earn SUB tokens whenever someone tries to access the internet or runs a website over the substratum network. While these rewards will increase by holding a greater amount of SUB tokens, you don’t need any tokens at all to receive rewards. Their application is designed to be easily understandable and usable by anyone.

Substratum recently released its public Beta and announced the implementation of the passive income feature for their next update. 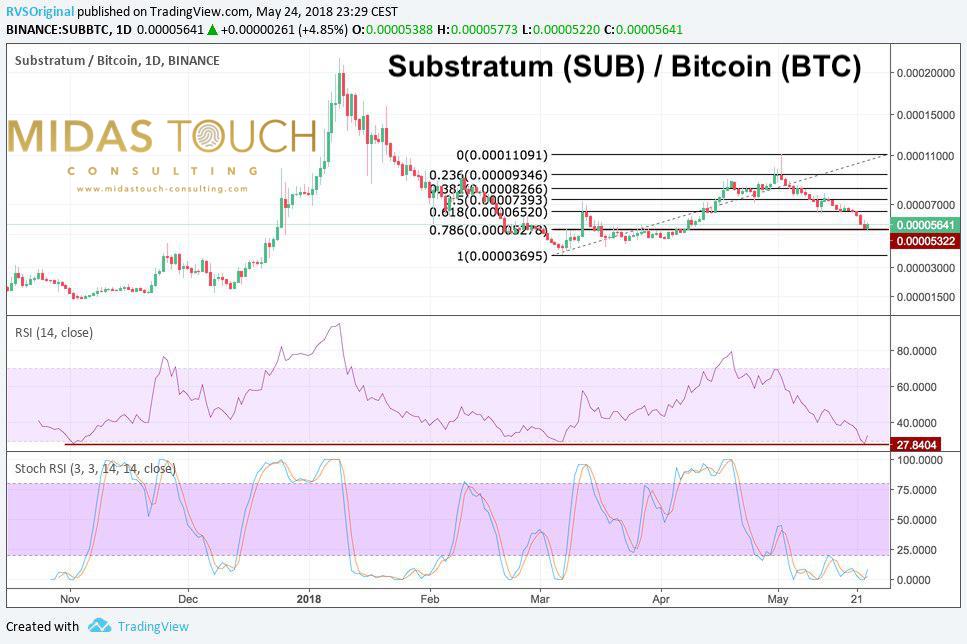 There are several reasons to believe that we are in a very interesting zone to buy SUB. First of all, we are once again around the 30 RSI level which already held two times in the last seven months. According to the RSI indicator Substratum is oversold.

Furthermore the Stochastic RSI also indicates that SUB is currently oversold. And last but not least, the price of SUB has already retraced to the 0.786 Fibonacci level, which is also in the range of a previous low and therefore at support.

Being around for quite some time now, Substratum is a project a lot of people have high expectations of, mainly because the team aims to provide an alternative way of accessing the internet and bypassing censorship. Whether or not they will be successful in this regard remains to be seen.

But as the crypto sector has sold off pretty hard over the last three weeks, Substratum´s beaten down currency SUB is certainly at an interesting level here. Following the only successful principle “buy low and sell high”, SUB currently costs 50% less satoshi than in early May.

Further Resources: Excellent and in depth research by King Passive on Substratum.