After reaching an important high in the silver market at US$29.80 in early August 2020, prices subsequently corrected significantly and dropped to US$21.66 in mid-September. For four weeks now, the precious metals have been trying to countermove and recover. Initially dynamic, however, this has now turned into a treacherous and above all very tough sideways shift. Every attempt to break out upwards has failed, while the bears on the downside are have neither been able to make any real progress. Silver is primarily trading between US$24 and US$25, while gold has been twitching back and forth between US$1.890 and US$1.925. Short-term traders find this phase extremely difficult while long-term investors are getting increasingly irritated. Silver – Tough sideways thrust.

Ultimately, however, the precious metals sector does exactly what any market would do after a spectacular rally, including a phase of exaggeration: it digests the rise and throws off its weak hands both along the price and time axes. In view of the trendless phase and the upcoming US elections, there is no need to act rashly at the moment. The possibility that gold and silver will dive another floor deeper remains.

Should this happen, it would again offer a very good opportunity to enter the market or to buy additional shares. For silver, prices below $21 and for gold around or below $1.800 would be expected in case of another wave of corrections. Overall, it is best to follow current events patiently and wait until the next oversold situation occurs, at least on the daily chart. 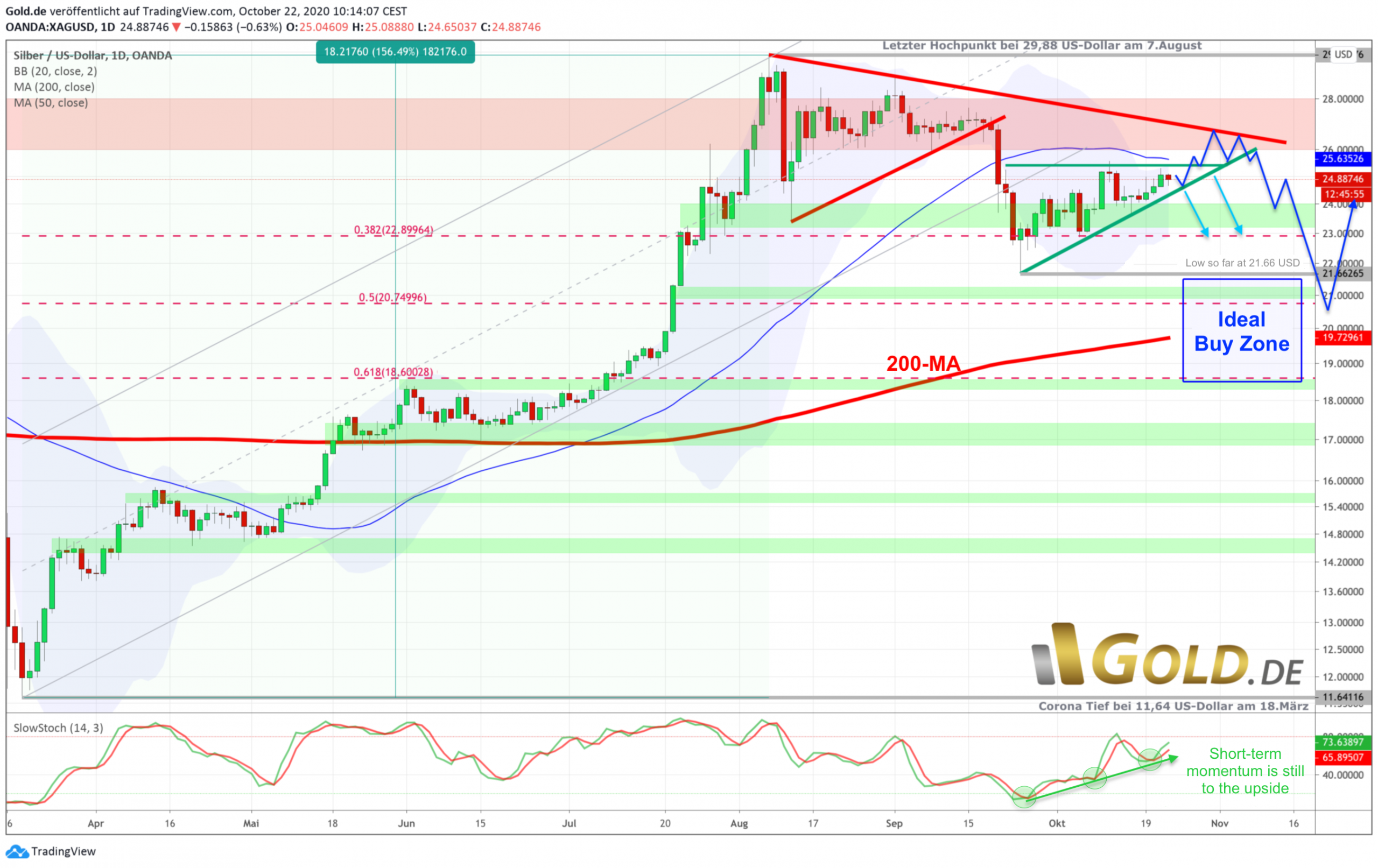 The price of silver did reach an important low at US$21.66 on September 24th. Since then there has been a recovery, which so far has peaked at US$25.56. Despite these temporary gains of 18%, one cannot yet speak of a real new uptrend. Rather, the price of silver has been moving tenaciously and sideways through the chart for a good two weeks, similar to the price of gold. Although there are higher lows so far, on the upside the resistance zone around US$25.50 has blocked any attempt to break out. In addition, silver has been trading below its 50-day line (US$25.63) for the past month. On the downside, the green uptrend-line of the last four weeks must hold as well.

Watch the green uptrend-line of the last four weeks

With a little good will, an ascending triangle can then be seen, at least in the short term, which with prices above US$25,60 would not only be dissolved, but would then probably also unlock a continuation of the recovery in the direction of US$27. However, if the silver prices slip beneath the green up-trendline (currently approx. US$24,25), another sharp sell-off is likely to occur similar to the one in mid-September. The most likely target would then be the rising 200-day moving average (US$19,72). This would create an ideal buying zone in the range of US$18,50 to US$21,50 in order to profit from the temporary weakness in the silver market at favorable entry prices.

Such a technical scenario would probably take effect primarily if one of the two parties were to contest the US election. Similarly, a victory by President Trump could put the equity markets in party mood, which would put the precious metals sector under temporary pressure.

Overall, I still recommend a patient and wait-and-see stance, as an oversold situation is not evident on either the daily or weekly chart. However, new buying opportunities will arise. At the moment, at any rate, I advise to stay away from this confusing sideways grind.

Calculated in Euros, the price of silver bottomed out at 18,60 EUR in September. The recommended purchase limit below 20,00 EUR has thus been reached several times between September 23rd and October 7th. Since the possibility of another sell-off still exists, there is no reason to raise this buy limit. The still relatively distant, but rising 200-day moving average (17,30 EUR) rather makes it clear that silver will probably need more time and may even slip below 20 EUR.

Those who do not yet own any gold and silver at all should nevertheless exchange at least five percent (5%) of their total assets (net worth) for precious metals. It does not depend on the best price, but only on the fact that you hold it in your own hands.