At the end of March 2018, a blockchain foundation called Nebulas IO launched its Mainnet and its native cryptocurrency NAS. The project, also known as the “Google of blockchains”, mainly provides a search engine for decentralized Apps and blockchains. It earned a lot of attention over the past few months, due to the fact that the founders of Nebulas are also the founders of the chinese cryptocurrency Antshares, later rebranded to NEO, (currently rank 11 on Coinmarketcap).

The Nebulas blockchain can be considered as unique in many ways. Instead of using existing consensus mechanisms like Proof of Work or Proof of Stake, Nebulas created its own algorithm called Proof of Devotion (PoD). An additional feature would be the Nebulas Force (NF), giving Nebulas and its dApps the ability to perform major updates on the blockchain without executing a hardfork.

The third and probably most important element is a ranking (NR) and incentive (NI) algorithm. With this component, the Nebulas blockchain will automatically rank dApps, addresses, smart contracts and other elements of blockchains for “liquidity, propagation of users’ assets, and the interactivity between users”.  In order to incentivize developers to keep the standards of their blockchain apps high, users who achieve high ranks will be rewarded with Nebulas Tokens.

Admittedly, the usual cryptocurrency investor might now ask himself why such a platform running on a blockchain is needed. On the one hand, it can be expected that the blockchain environment will evolve heavily over the next decade, including the integration of thousands of unique dApps and blockchains. Regarding this fact, it would absolutely make sense to build a search engine for this field.  On the other hand though, Nebulas might be operating in an area with heavy competitors. While we haven’t heard much of Google regarding blockchain so far, it is almost certain that they are observing the scene very closely. There is possibly still a lot of time left until the use of a blockchain search engine will become a standard practise. This increases the speculative aspect a lot. 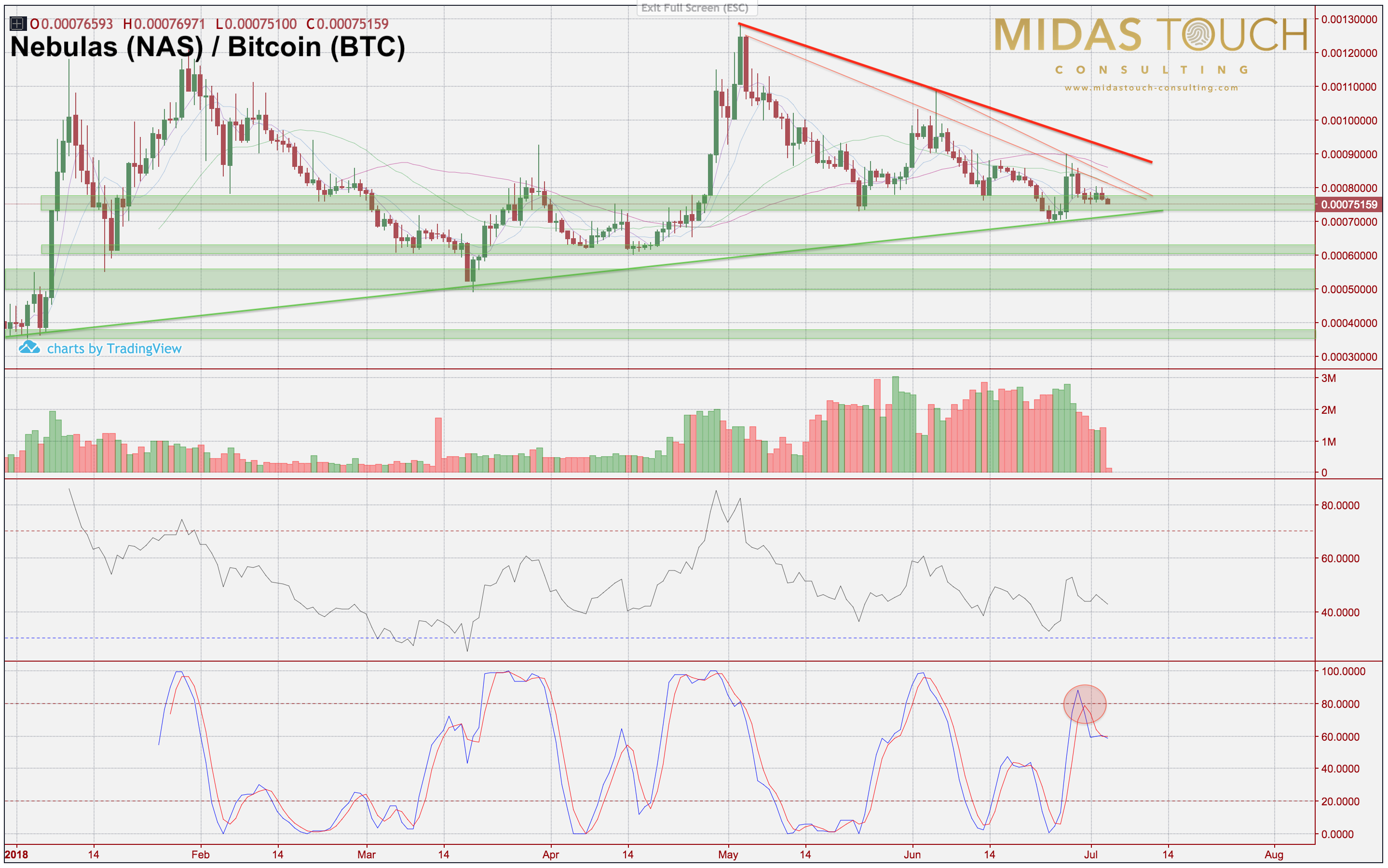 On the daily chart we can see that Nebulas topped out against Bitcoin in early May at 125.59 satoshi. Since then price was nearly cut in half and Nebulas currently trades for 74.673 satoshi. The downtrend is still imminent although Nebulas managed to post a notable bounce in the last week of June. Generally, it seems that this mostly unknown coin is always good for quick bounce. In April for example Nebulas was able to move from 60 satoshi up to 130 satoshi within just three weeks.

Now the coin is dipping into the very important support zone around 70 satoshi. Should it fail here again, the rather flat uptrend-line will certainly be challenged one more time. Should Nebulas fall below 72 satoshi all bullish bets are off the table as the coin will very likely continue to sell off down into the next support zone around 60 satoshi. If instead bulls are able to reverse the current downtrend they will have to break through a cluster of resistance lines. Only a move above the recent high at 90 satoshi would clear the field and signal a new up-trend. In that case the downtrend line currently around 90 satoshi should be overcome and Nebulas would have room to rally towards 100 – 110 satoshi.

A rather positive note is the rising volume over the last couple of months. While high volume is generally a positive characteristic for a cryptocurrency, it can also mean strong sell pressure during a downtrend. Traders & investors should be very cautious until the general situation of Bitcoin is less bearish.

To summarize, Nebulas is a Blockchain 3.0 platform that has huge potential to revolutionize how we interact with cryptocurrency and blockchain. Currently there is no way to search through all of the different blockchain platforms and algorithmically rank decentralized applications, websites, or services. Nebulas claims to change this by following three main principles:

It is still way too early of course to make any serious predictions but generally speaking Nebulas could have the same impact on crypto as Google had on the web. Aiming for a continuously improving ecosystem based on its blockchain valuation mechanism, Nebulas proposes future-oriented incentive and consensus systems, and the ability to self-evolve without forking.