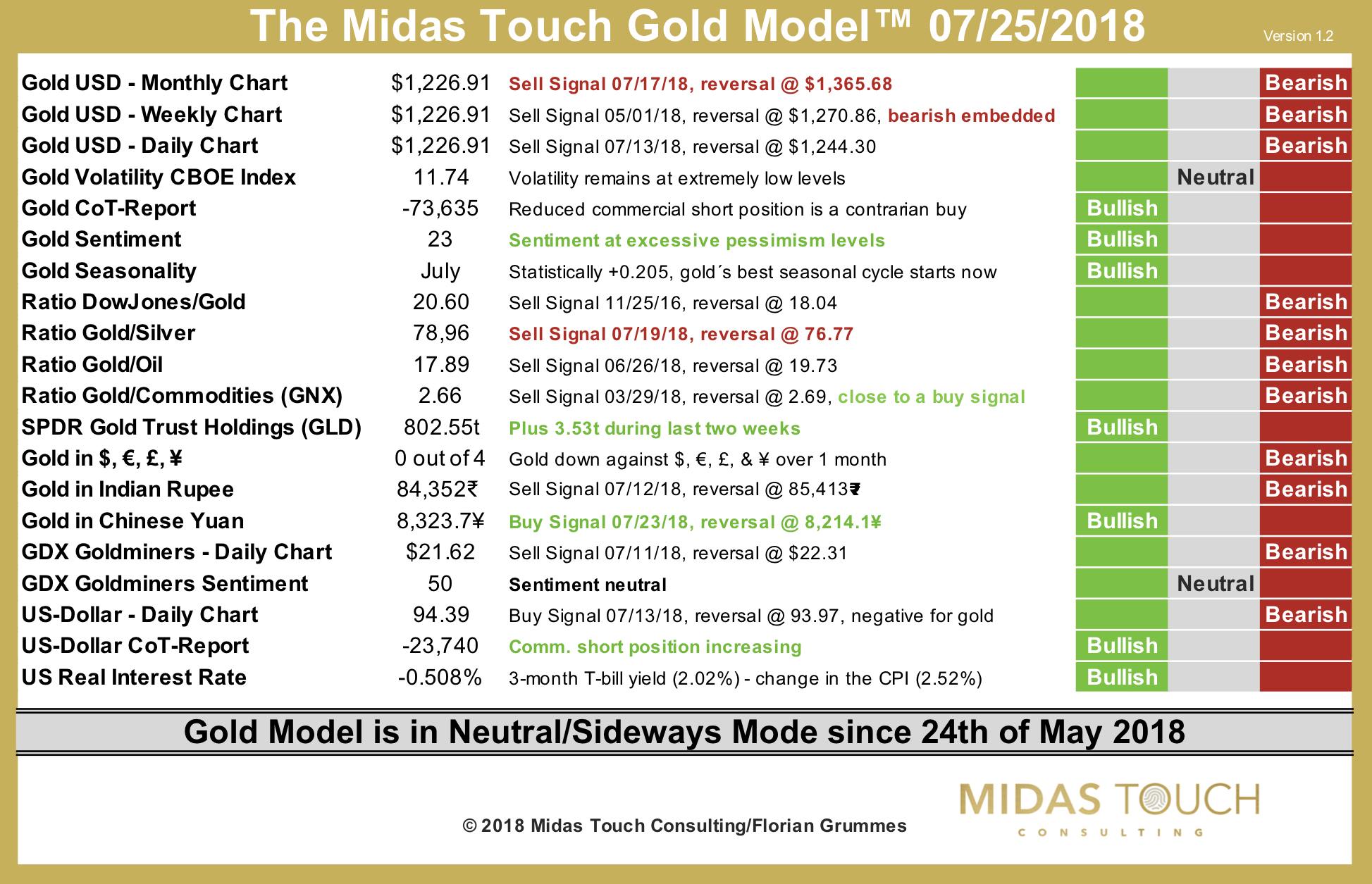 While gold and silver prices are collapsing since mid of June the Midas Touch Gold Model™ has been in neutral mode for the last two months already. This was a very important call to move to the sideline and watch what would enfold in the precious metals sector. In hindsight a clear and bearish sell signal would have been a good opportunity to profit from shorting these markets, but due to the relative strength seen in the mining stocks the model simply remained neutral. Besides its neutral stance, within the Midas Touch Gold Model™ there have been a lot of new bullish and bearish signals.

All timeframes in USD are bearish

First of all, and that is a very negative development, the monthly chart for Gold in USD has shifted to a bearish signal. It now takes a Gold price back above 1,365 to turn this signal around again. The last time this “big picture” signal changed was 11 months ago. Obviously, the big picture component will be negative for the next couple of months at least!

Looking at the weekly chart for Gold in USD, we find the extremely negative “bearish embedded stochastic status”, which is dragging the market down since many weeks already. Once this signal changes the recovery rally will have started!

On the daily chart it now takes a Gold price above 1,244 USD to shift the chart towards bullish. Actually, as it looks right now, if Gold can close above 1,237 USD the probability for an established bottom rises strongly.

Worst sentiment since 1990 is extremely bullish

One of the most bullish signals comes from the beaten down sentiment numbers. According to sentimenttrader.com the combined sentiment on gold, silver, and platinum now “ranks among the worst since 1990”. Statistically similar depressed sentiment levels have led to excellent returns in gold, silver, platinum and mining stocks over the following three months!

Combined precious metals sentiment currently below 24! Gold should return strongly over the next three months!

In combination with the other contrarian buy signal coming from the CoT-report as well as the positive seasonal cycle, gold should be very close to a multi-week/multi-month bounce/recovery.

In this context the new sell signal coming from the Gold/Silver-Ratio does not seem to put too much negative pressure on the table. The ratio has been moving within a small range and just one or two strong silver days could quickly reverse its bearish reading.

Another positive note is the slightly returning ETF-demand. It is of course still very small but while gold is down heavily ETF investor have been buying 3.5 tones of GLD over the last two weeks. As well Gold in Chinese Yuan has issued a buy signal on Monday, while the CoT-report for the US-Dollar now shows a rather high commercial short position.

A short-squeeze is coming

Summing it up, it seems as if all the necessary parts for a massive Gold recovery and the expected summer rally are on the table. Yet, the market itself doesn’t want to move but remains in this persistent downdraft. Gold is hanging around 1,226 USD and is not showing any convincing signals of an established bottom. Instead it might still need one more final sell out towards the lower monthly Bollinger Band around 1,182 USD.

If this indeed happens, bears would have totally exaggerated this down move! A fast snap back rally (short squeeze) will then probably be the only solution for this extremely oversold market. Therefore, expect the bottom somewhere between 1,180 and 1,210 USD followed by a snapback rally towards at least 1,265 USD or even 1,300 USD.

Still a bull market or back in bear market?

While a coming short squeeze is evident in the short-term, the bigger picture certainly has suffered over the last couple of weeks. As the ascending triangle has been clearly violated, Gold´s bear market might be back upon us. This is because Gold should not experience such a weak momentum during bull markets. Therefore this 155 USD sell-off since mid of April raises the probability that Gold is still in a bear market.

At the same time the market is extremely oversold and this exaggeration could also create enough power for a decisive breakout through 1,365 USD. It is still too early to make a definite assumption, but the next wave up will be critical and should bring more clarity about the bigger picture.

In total, the Midas Touch Gold Model™ is still neutral. The model needs more bullish signals before its conclusion can finally can become bullish.