ICON is a korean based Blockchain protocol which focuses on connecting various Blockchains. For instance, ICON is fully compatible with the Bitcoin or Ethereum Blockchain. It was founded by the korean fintech company Dayli Financial Group, which also appeared in the news for creating other Blockchain related projects, like the CoinOne cryptocurrency exchange. Over the past months, many crypto personalities and influencer started to support ICON due to hopeful future prospects. It is often regarded as one of the most promising projects in 2018, which is why Blockchain investors are advised to take a look at the whitepaper and website.

While the ICX token was emitted in September 2017 as an ERC20 token, ICON successfully launched its own mainnet in early 2018. ICX is currently ranked as the cryptocurrency with the 20th highest market capitalization. The current situation can be considered as a nice entry point for a long term position or a short term trade. 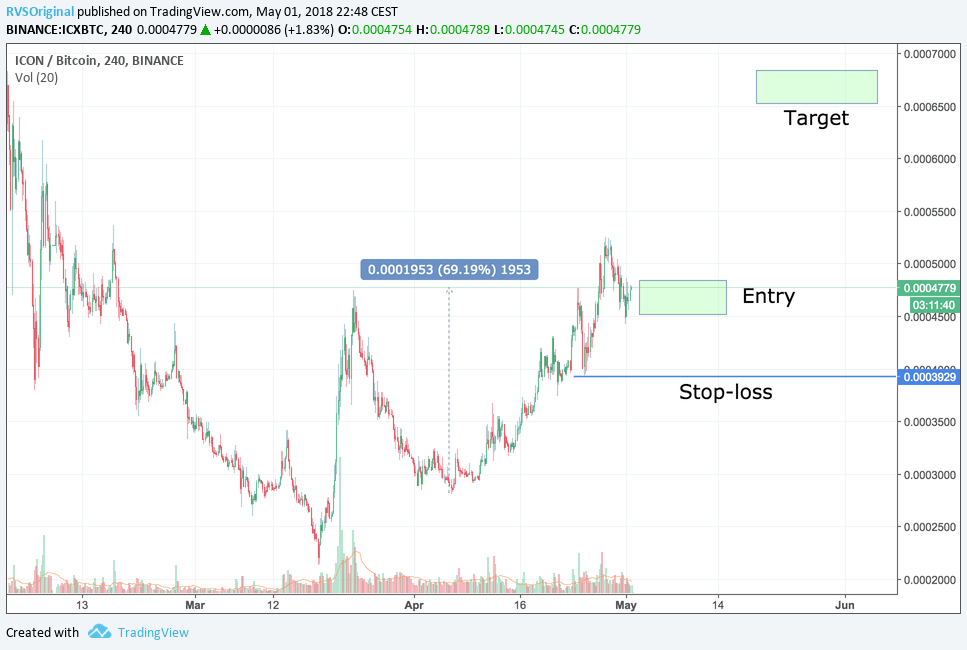 The price of ICX formed a beautiful Cup & Handle pattern on the 4h chart. It successfully broke out of this pattern on April, 27th and is currently re-testing the cup support line. The profit target for this trade would be 6,690 satoshi (depth of the cup + breakout price). For safety reasons you should place a stop-loss order right under the handle formation, which is around 3,900 satoshi. At the current price of 4,700 satoshi, the trade equals a risk/reward ratio of 2.5.

ICX can be traded on a great variety of exchanges, but it has the highest average volume on Binance.