While investors anticipate this week’s Federal Reserve decision on interest rates, Bitcoin is slowly moving around the 17,000 USD level. After the crypto sector was shaken up badly throughout the year culminating in the wake of FTX filing for bankruptcy, December so far seems to bring a calming. Bitcoin – Price hardly reacts to bad news anymore.

Five weeks ago, we were still reasonably confident that bitcoin could at least temporarily manage a small recovery. After prices had already recovered to around 21,500 USD, however, the emerging scandal surrounding FTX once again caused an immediate and sharp trend reversal towards the south.

Since then, events have been unfolding at lightning speed and the crypto world is no longer the same as it was before. While we know from the past that during a crypto winter, fundaments and players that were thought to be safe can collapse and break away in a very short period of time, the extent of fraud and incompetence in 2022 is sheerly unbelievable and shocking.

Nevertheless, the “schadenfreude” currently widespread among goldbugs is not appropriate, because the crypto sector is currently simply going through another brutal shakeout phase, at the end of which will most likely be the beginning of a new epic bull market. Moreover, bitcoin has stood up for the separation of state and money and continues to deliver this function reliably despite outdated blockchain technology, even in this bear market.

After more than one year of “crypto winter” most garbage should have been disposed of by now. Yet, another wave of bankruptcies among crypto exchanges and trading platforms as well as among the often highly indebted miners cannot be ruled out. The domino effect triggered by the FTX fraud platform is still drawing wider circles. After all, this is how countless fraudsters and criminals in the crypto sector were and are gradually disposed of. 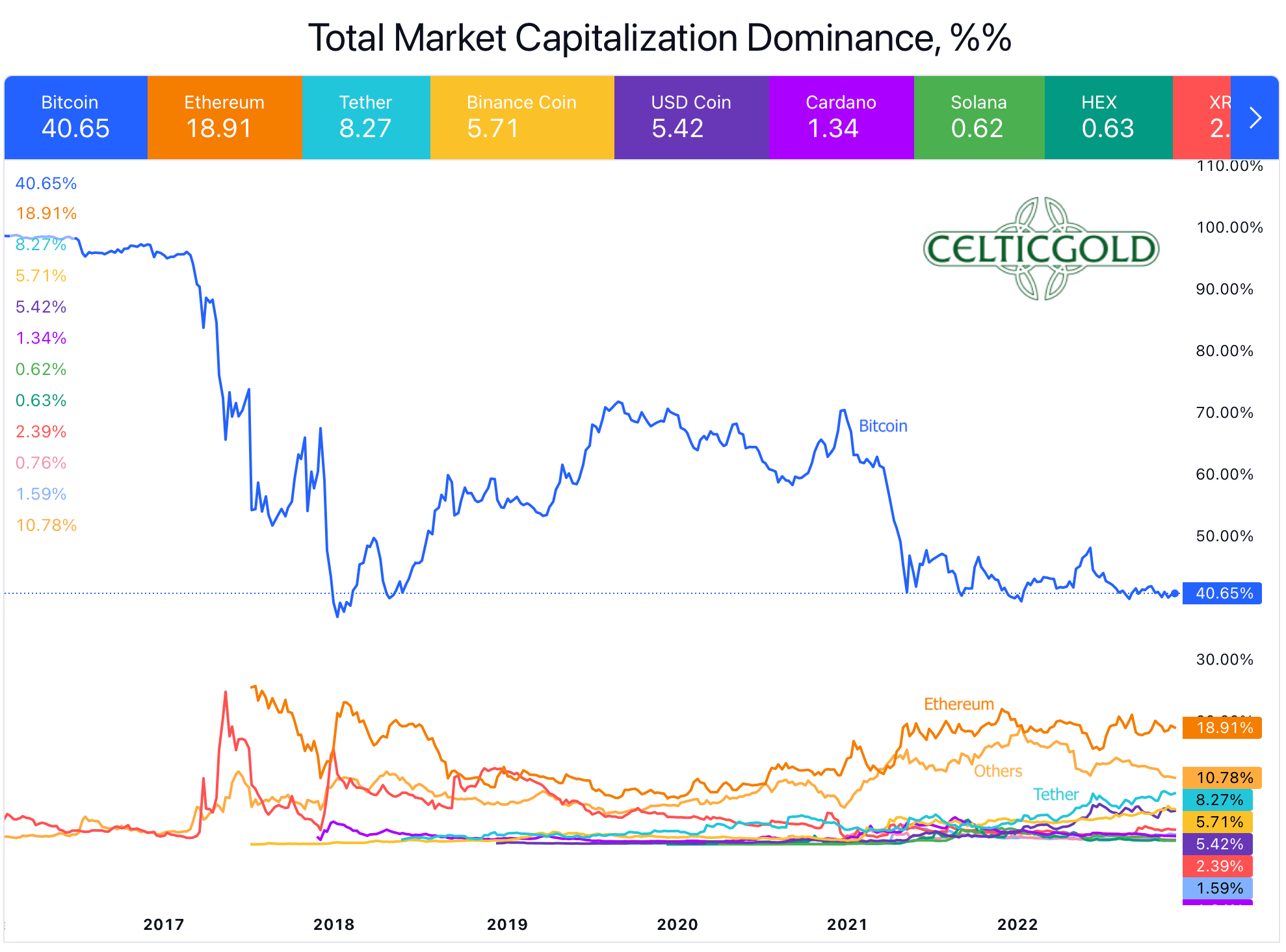 Pricewise, the FTX collapse caused another sell-off wave, which pushed bitcoin to a new low at 15,479 USD on November 21st. Overall, this represents a drop of almost 78% from the all-time high at 69,000 USD on November 10th, 2021. However, these huge losses in bitcoin are just the tip of the iceberg, as most altcoins have been hit much harder.

However, Bitcoin has been lethargically trading sideways through the chart between 16,000 USD and 17,000 USD since November 9th. The price action is reminiscent of the last major bottoming phase in December 2018, when Bitcoin oscillated between 3,500 and 4,000 USD for months, only to explode to 13,800 USD within two and a half months.

Technical Analysis for Bitcoin in US-Dollar 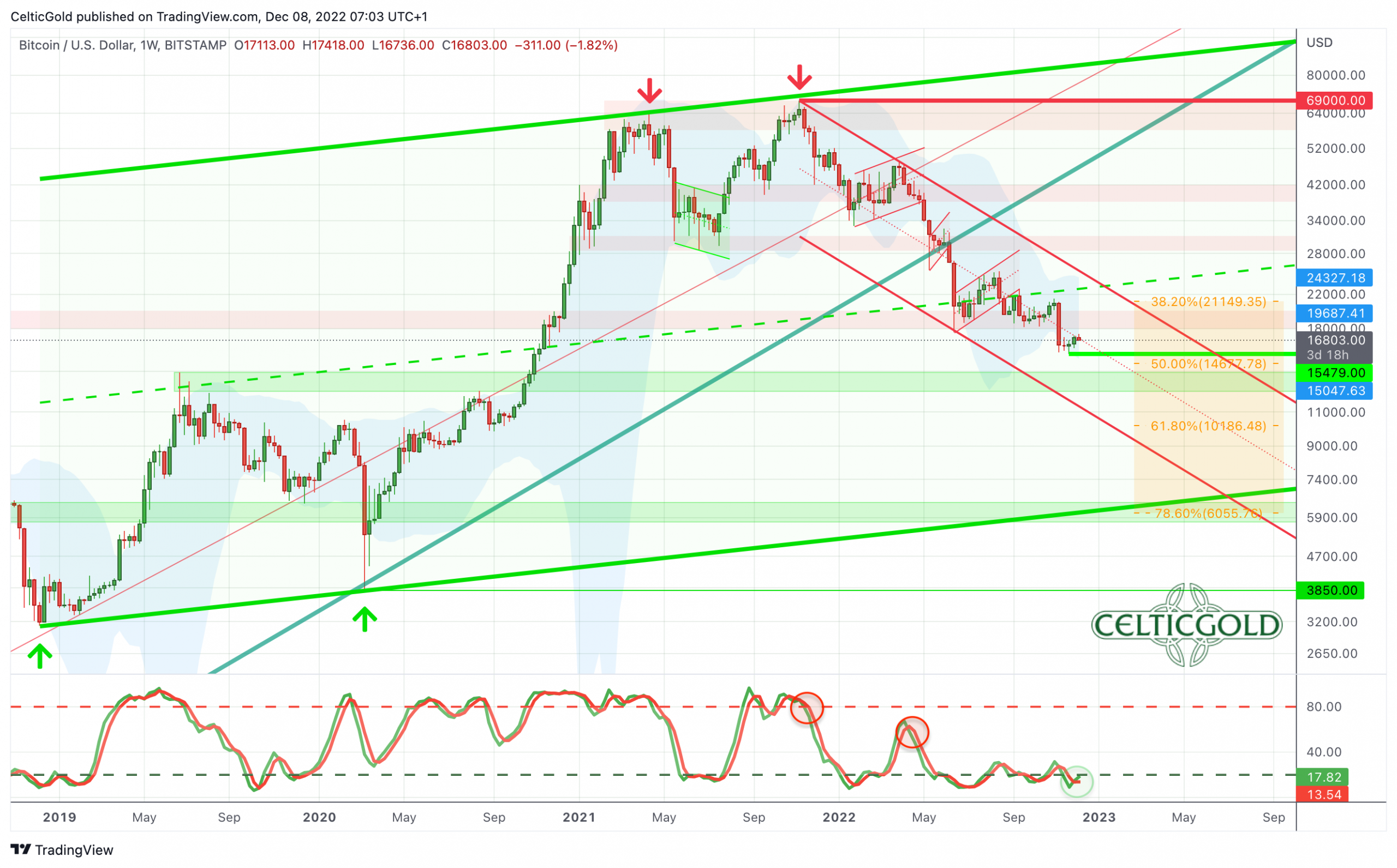 On the weekly chart, Bitcoin continues to oscillate around the mid-trendline of the downtrend channel that started in November 2021 (in red). At the same time, the overarching uptrend channel (in light green) is still intact (despite the 12-month correction!) and would only be shelved with prices below approx. 6,000 USD.

The next support zone is waiting around 13,000 to 14,000 USD. Since neither the price action nor the weekly stochastics show any signs of a trend reversal, the primary scenario must include new price lows. However, the lower Bollinger Band (15,049 USD) currently does not provide too much room for the bears anymore.

Overall, the trend on the weekly chart continues to be downward, while at the same time prices have at least been stabilizing for several weeks. We now consider the downside risk to be manageable. The “worst case” remains the closing of the open price gap in the Bitcoin future around 10,000 USD, but we would not be surprised if the correction had already ended at 15,479 USD or if the final low was found in the area around 13,000 to 15,000 USD. 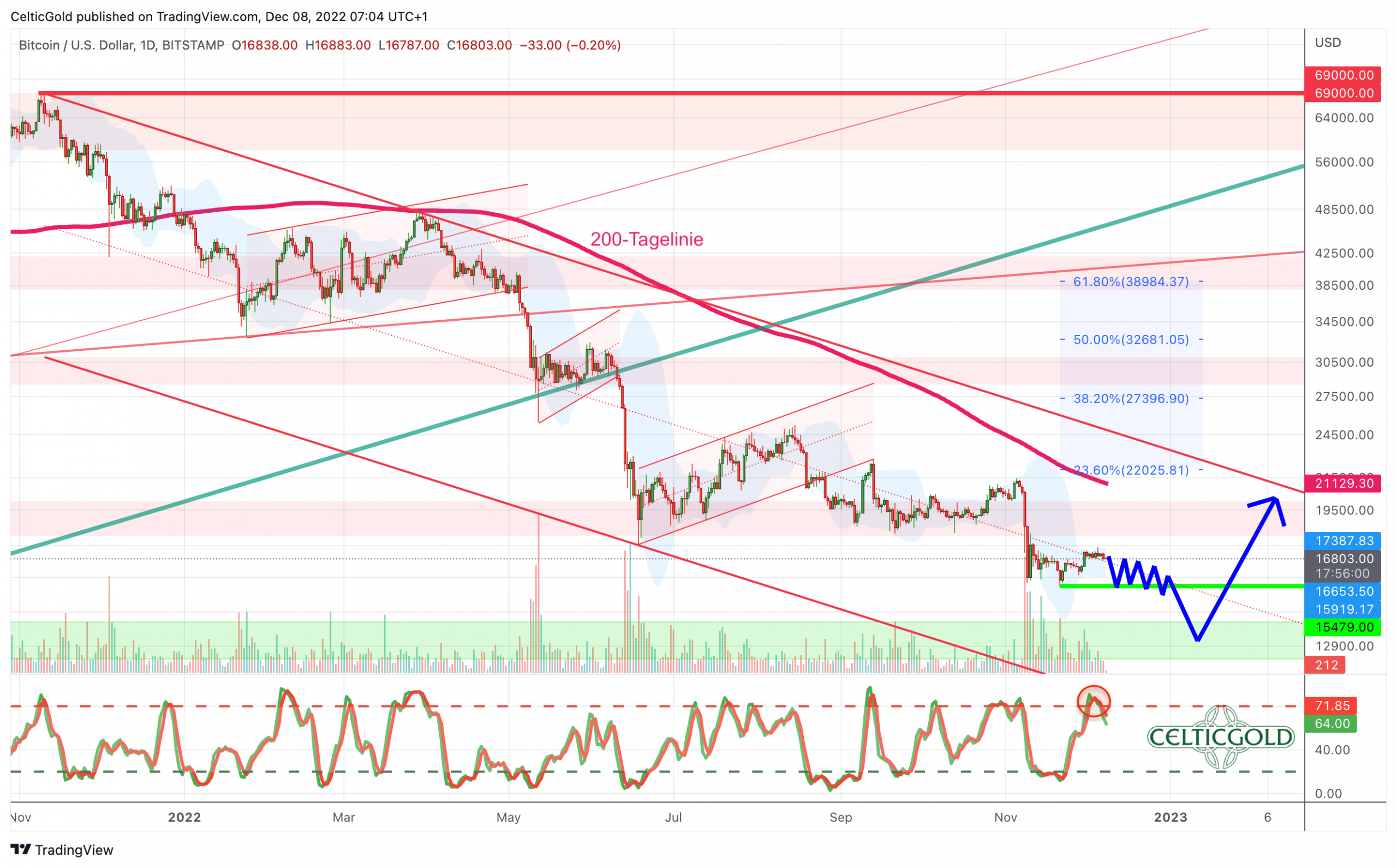 Apart from a slight stabilization, Bitcoin did not manage to achieve much in recent weeks. At least, from the low at 15,479 USD, prices pushed up by almost 12.6% to 17,436 USD. However, this recovery already caused an overbought daily stochastic, which has turned downwards in the meantime. If Bitcoin can still hold above 15,500 USD in the coming days and weeks, there is a chance that the final low has already been seen at 15,479 USD.

In summary, the daily chart is neutral in view of the sideways price action. However, purely from a trend perspective, lower prices continue to have the higher probability. From a long-term contrarian perspective, however, Bitcoin is severely oversold providing an ideal entry opportunity. In this context, it probably won’t matter whether you buy at 17,000 USD, at 15,000 USD or at 10,000 USD. Because the next bull market could drive Bitcoin prices towards six-digit prices sometime between 2024 and 2026.

Sentiment Bitcoin – In 2022 fear has been the norm

The Crypto Fear & Greed Index is currently trading at 25, still measuring extremely high levels of fear. Since the price plunge at the beginning of the year, this has become the normal state. 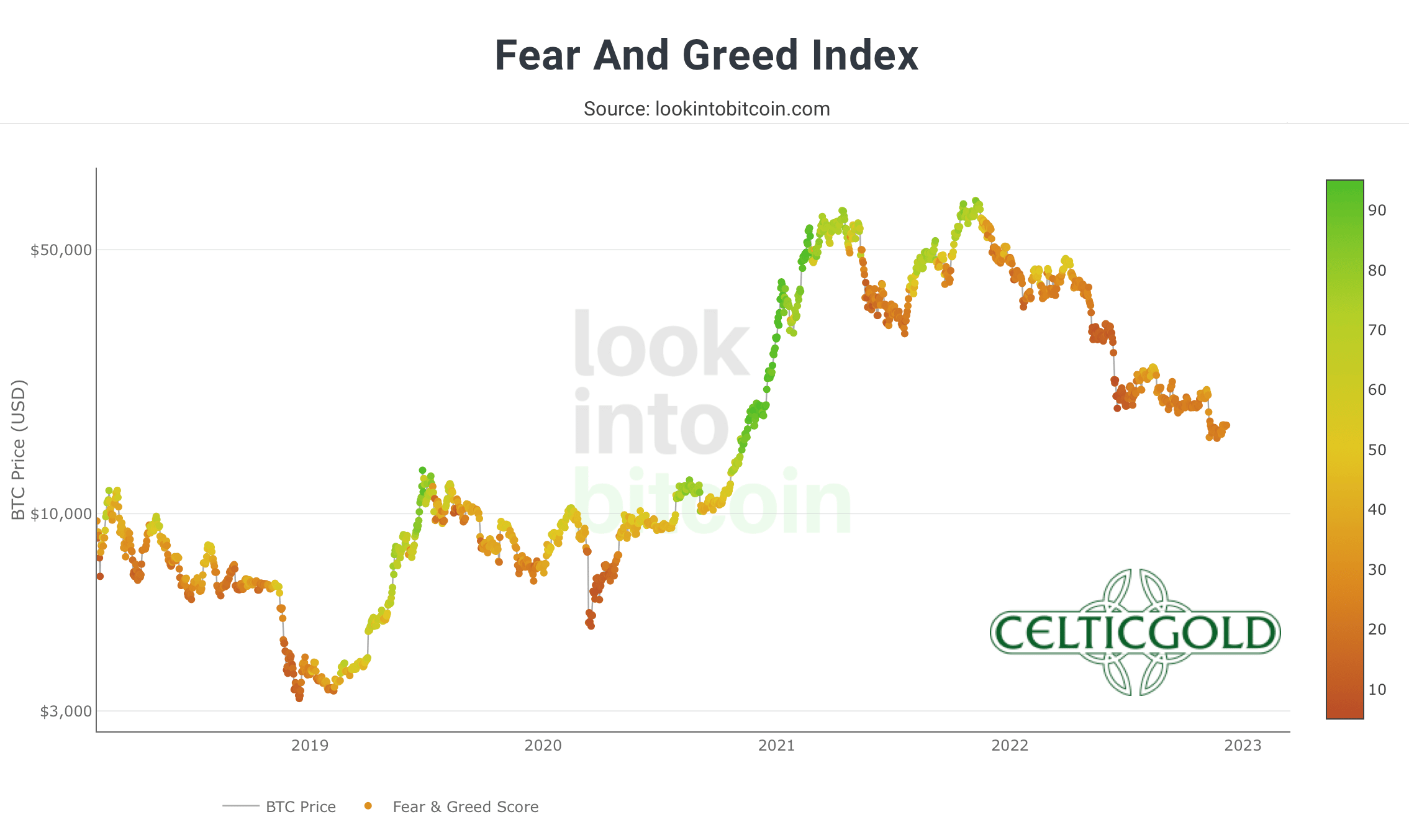 In the big picture, however, the beaten-down and very fearful sentiment continues to deliver a contrarian buying opportunity. 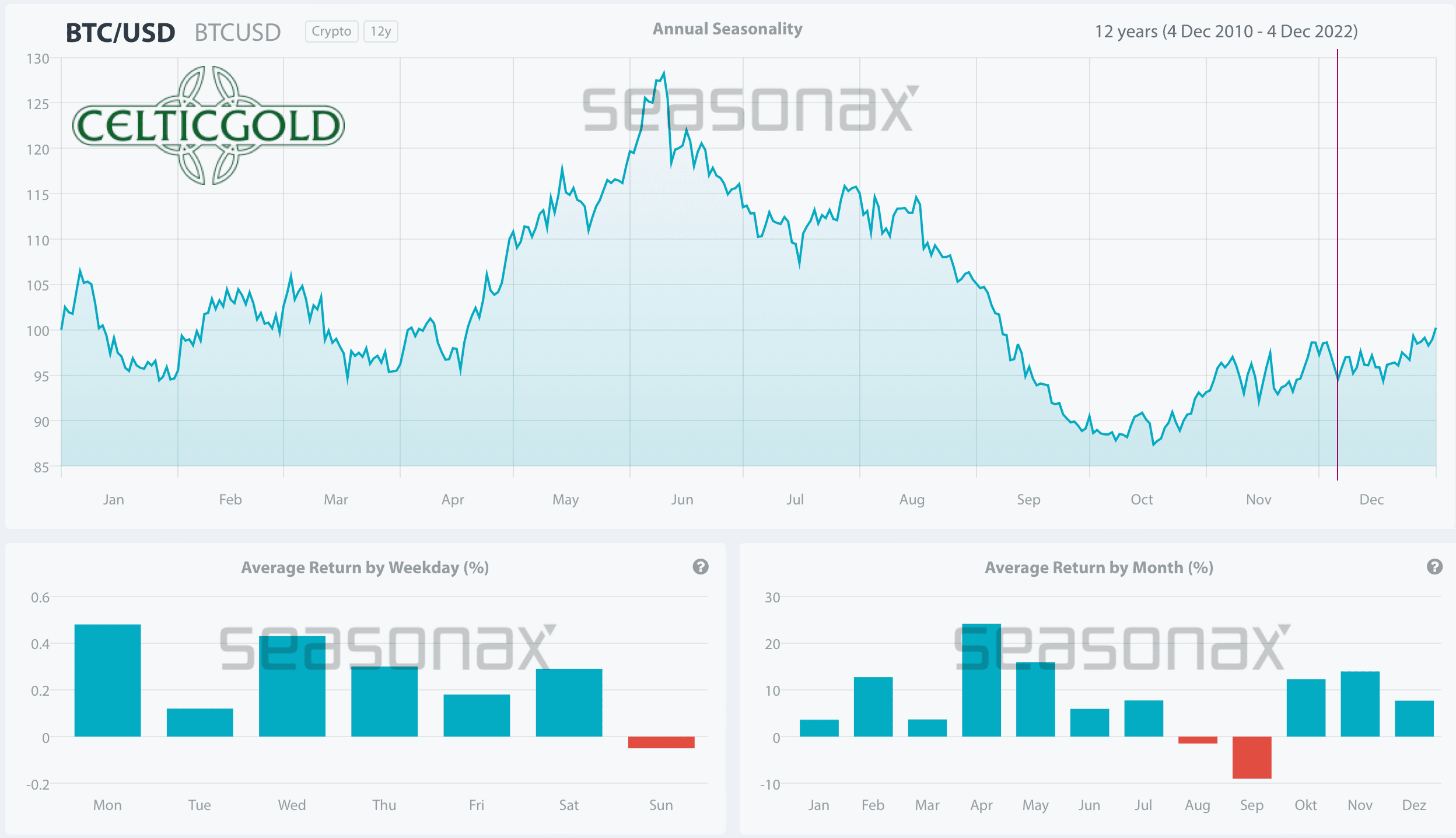 Seasonality for bitcoin, as of December 6th, 2022. Source: Seasonax

The statistically positive 4th quarter has so far only stabilized Bitcoin prices. In principle, however, the seasonal pattern supports Bitcoin into the next summer. The most likely scenario would be the start of a major recovery rally somewhere between March and April 2023. Until then, bitcoin could simply run sideways and consolidate between 15,000 USD and 17,500 USD.

Overall, seasonality suggests that bitcoin has already seen its low and could start a new uptrend latest by next spring. 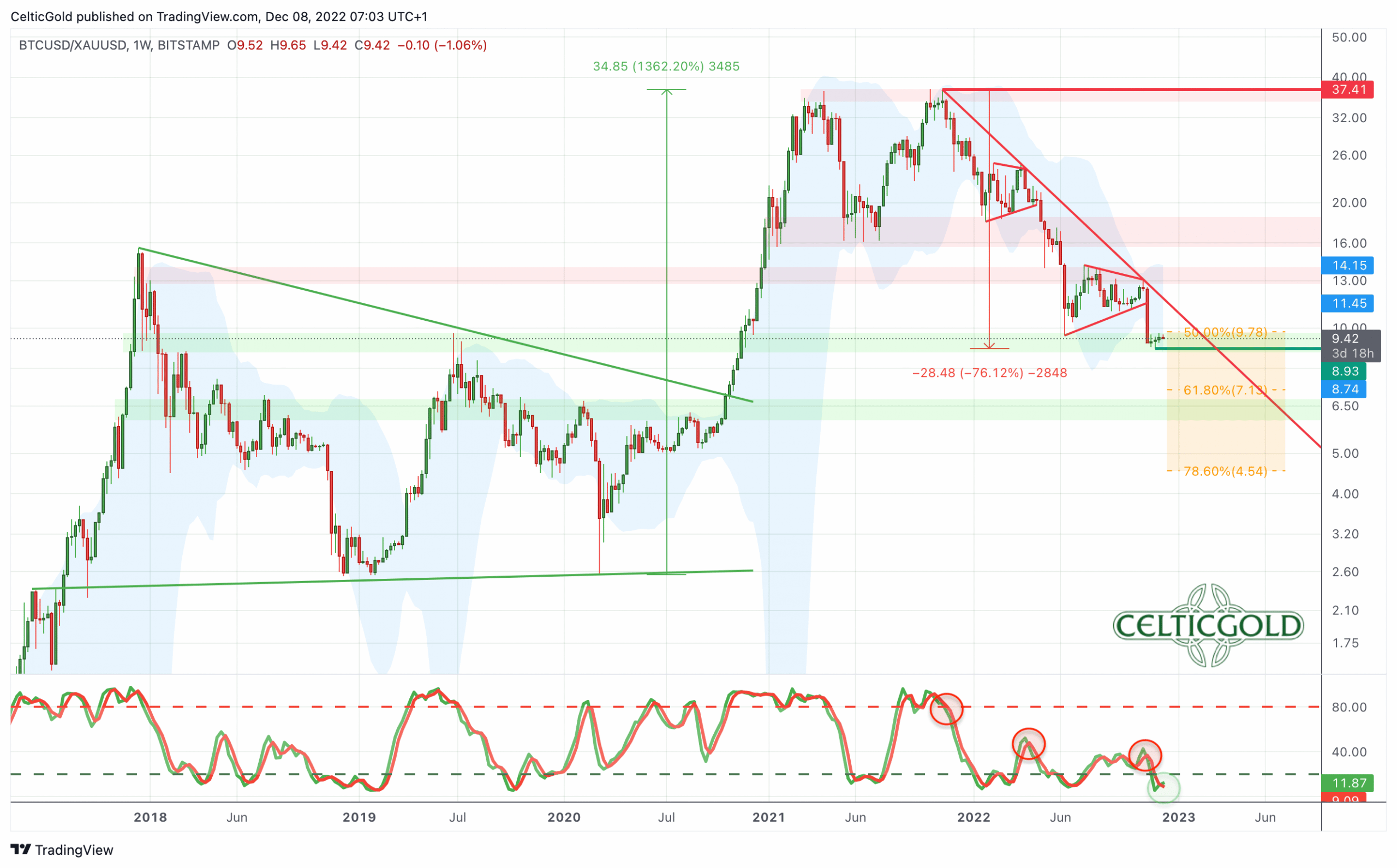 The Bitcoin/Gold-Ratio failed exactly at the downtrend line a month ago and quickly slid to a new low at 8.93. Since then, the ratio has been crawling sideways without any signs of a trend reversal. Should the support between 9.75 and 8.5 not hold, the next support lies only much lower between 6.75 and 6. At least, at 7.13, the 61.8% retracement of the previous wave up still should show some support, too. The Weekly stochastic is heavily oversold and would have plenty of room to the upside.

In summary, the Bitcoin/Gold-Ratio is still in a clearly established downtrend and trend reversal signals are (still) scarce. A rise above 11.5 would at least break the downtrend, making a larger recovery towards 13 and 16 possible.

Macro Update – Strong recovery in all sectors is deceptive 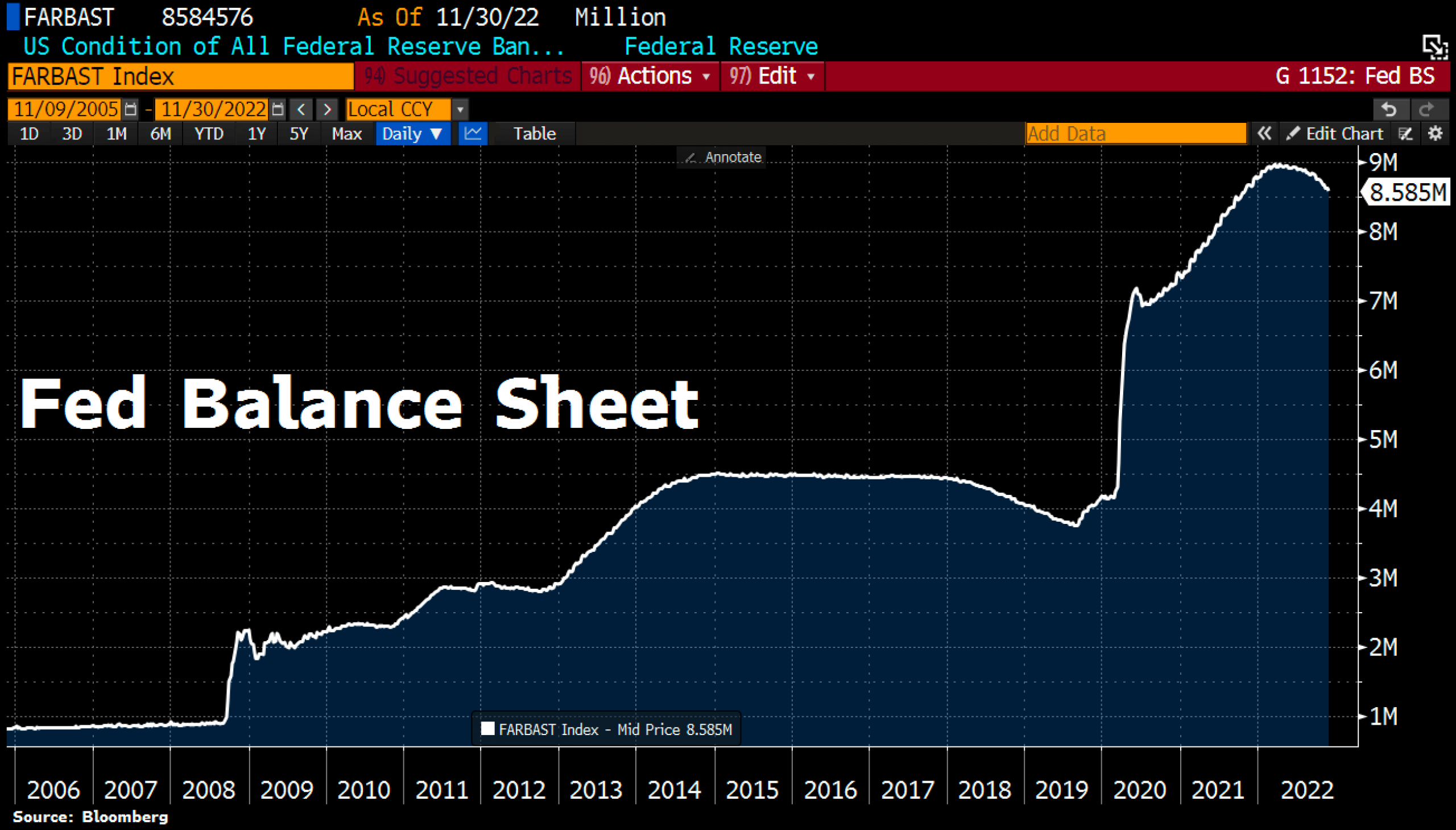 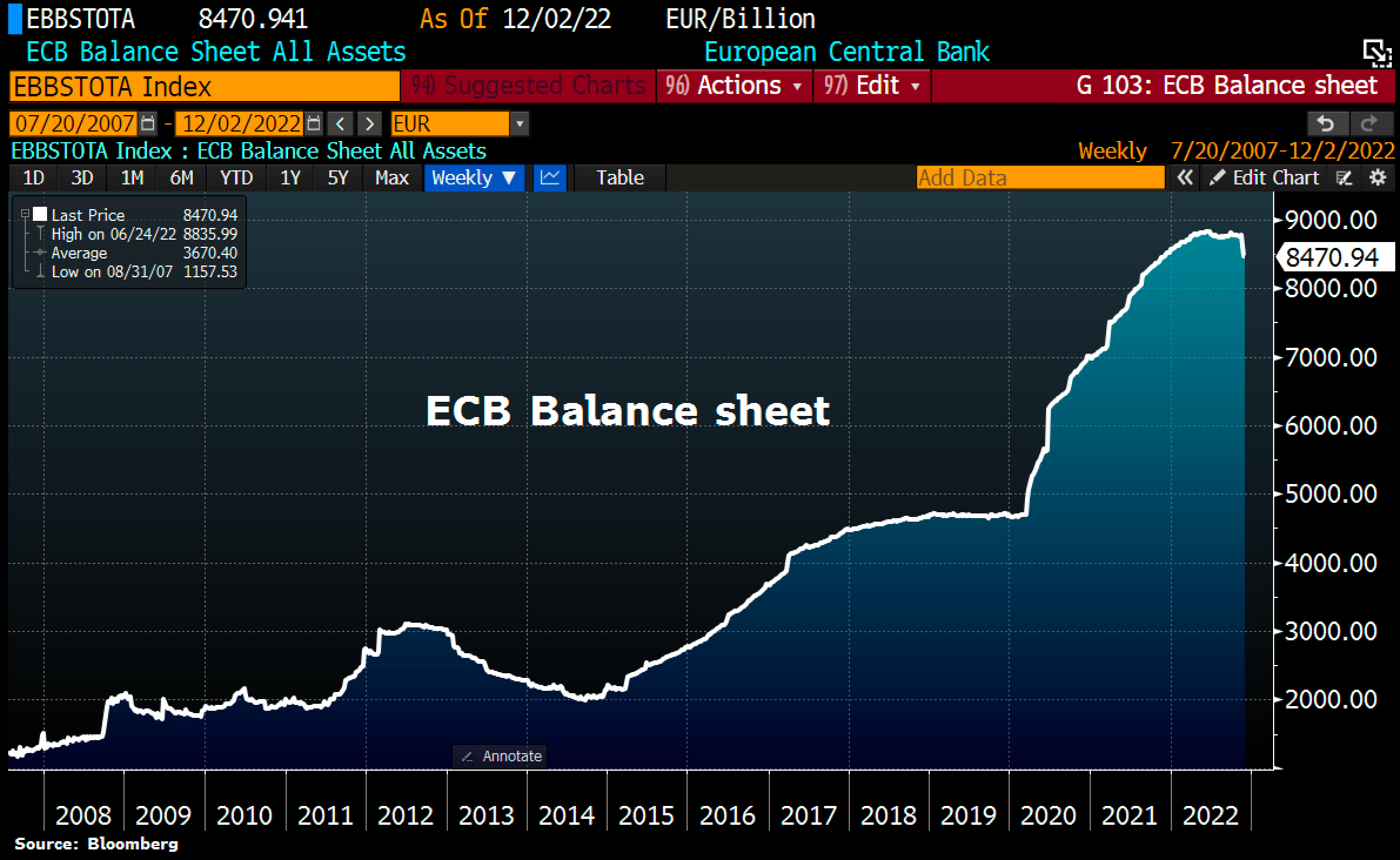 Central bankers in the euro zone are also trying to reduce debt. Here, the balance sheet shrank by 500 million EUR recently, bringing total assets down to 8,470.9 billion EUR. This is equivalent to around 66% of eurozone’s GDP.

After suffering heavy losses across the board into October, financial markets finally reached such fearful sentiment that there has been a huge rally in short covering over the last two months. Both, equity markets and precious metals prices thus recovered across the board, while the heavily overbought U.S. dollar corrected.

However, consumer sentiment is in the basement and increasing mass layoffs will weigh heavily on the real economy in the coming months, further undermining confidence. In the overall context, the recovery in the markets therefore appears exaggerated or deceptive. As early as this week, the upcoming FOMC interest rate decision could put a damper on the recovery of recent weeks and reduce it to yet another bear market rally.

We continue to fear that the FED has overdone its restrictive monetary policy and that its consequences will cause further turmoil in the financial markets in the coming months. We therefore maintain our fundamental “risk-off” stance.

While former FTX CEO Sam Bankman Fried (SBF) tries to plead negligence via an interview tour in the US media, the crypto sector is in a full-blown “midlife crisis.” Thanks to SBF and the collapse of FTX, one of the largest crypto exchanges in the world, confidence in digital assets and the people behind them has fallen to an all-time low. US authorities have so far failed to hold SBF accountable for its reckless fraud.

At the same time, however, now would be the moment and the unique opportunity for the crypto and blockchain community to come clean and clear the way for new innovations to create smart and efficient solutions to real-world problems. The industry needs to move away from speculation on credit and hype and towards a responsible approach that delivers on the true promise of blockchain technology. The revolution of transparency and accountability, and actual ownership that enables a more equitable, efficient, and inclusive global economy.

Bitcoin continues to stand for just that and, at prices around 17,000 USD, is starting to look attractive again. While it is quite possible that a bottoming out will drag on for a few more months, lower prices or new lows could still be seen once again. Recently, however, Bitcoin – Price hardly reacts to bad news anymore. Therefore, both the surprises and the opportunities are on the upside from now on.

Analysis sponsored and initially published on December 8th, 2022, by www.celticgold.eu. Translated into English and partially updated on December 12th, 2022.

Feel free to join us in our free Telegram channel for daily real time data and a great community. If you like to get regular updates on our gold model, precious metals, commodities, and cryptocurrencies, you can also subscribe to our free newsletter.

This article and the content are for informational purposes only and do not contain investment advice or recommendations. Every investment and trading move involves risk, and readers should conduct their own research when making a decision. The views, thoughts, and opinions expressed here are the author’s alone. They do not necessarily reflect or represent the views and opinions of Midas Touch Consulting.