Cardano surges 1,000% since December! What’s next for the platform?

Cardano (ADAUSD) is up more than six-fold since December and up nearly 9,000% from its March 2020 lows at $US0.016 to the recent top at $US1.54. Hence, after such a spectacular performance can this rally continue? Is Cardano on its way to become a major cryptocurrency contender or was this just a fad? Cardano, What’s next for the platform?

Without a doubt, Cardano is one of the rising stars among the altcoins that has shown promise and could take a slice of tomorrow’s financial market cake. While it would take years for the cryptocurrency to catch onto ETH in terms of its developer ecosystem and usage, the groundwork is there.

Together with Ethereum, Cardano could disrupt financial services in the developing world. However, bearing in mind that it took a decade for ‘smart money’ to embrace bitcoin, it would be a while before consequential institutional inflows propelled the cryptocurrency to a new paradigm.

Cardano is a decentralised public proof-of-stake blockchain and cryptocurrency project and is fully open source. Cardano is developing a smart contract platform which seeks to deliver more advanced features than any protocol previously developed. It is the first blockchain platform to evolve out of a scientific philosophy and a research-first driven approach. Cardano says its goal is to allow “changemakers, innovators and visionaries” to bring about positive global change. The open-source project also aims to “redistribute power from unaccountable structures to the margins to individuals” — helping to create a society that is more secure, transparent and fair.

Cardano was founded back in 2017, and the ADA token is designed to ensure that owners can participate in the operation of the network. Because of this, those who hold the cryptocurrency have the right to vote on any proposed changes to the software. E.g., Cardano is used by agricultural companies to track fresh produce from field to fork, while other products built on the platform allow educational credentials to be stored in a tamper-proof way, and retailers to clamp down on counterfeit goods.

Cardano´s development team consists of a large global collective of expert engineers and researchers. One of the founders, Charles Hoskinson, the former CEO of Ethereum brings weight to the companies reputation and its main algorithm is mathematically proven to be secure. The current CoinMarketCap ranking is #5, with a live market cap of US$38.580.752.613. It has a circulating supply of 31.948.309.441 ADA coins and a max. supply of 45.000.000.000 ADA coins.

As such it allows ADA its crypto currency to be fast and secure. Its operations are meant to be scale-able in growth with integrate-ability of decentralized apps. Cardano is trading under the symbol ADAUSD on Binance, Bitfinex, Coinbase Pro, Kucoin, Kraken, Bittrex and other main exchanges.

The first thought that comes to mind when investing into a coin is if it is a possible fraud. The video below will convince even the most critical value investor that this coin is here to stay. Cardano has been supported by the main press and represents different aspects of its operation on different domains. It is also running various twitter accounts staking proof of attended events by staff for more than 2 years. Cardano has provided a great transparency of its project and exposed itself to 3rd party audits too. It’s solid wallet convinces as well!

Cardano increased over 1,000% since December 2020 from US$0.136 to $1.5. These are astronomical figures in traditional financial circles, but crypto bull market winners tend to win big when it happens.

After such an impressive run, a degree of caution is warranted especially now that the shine has begun to ware off. Cardano’s niche is likely to develop over the coming months and years, but the imminent release of Ethereum’s EIP-1559 scaling solution could manifest as a rug pull for its fledgling competitors.

But it must be stated as well, that a first wave of profit taking at the new all-time high had pushed Cardano down to US$0.95 recently, retracing already 38% of its bull run. 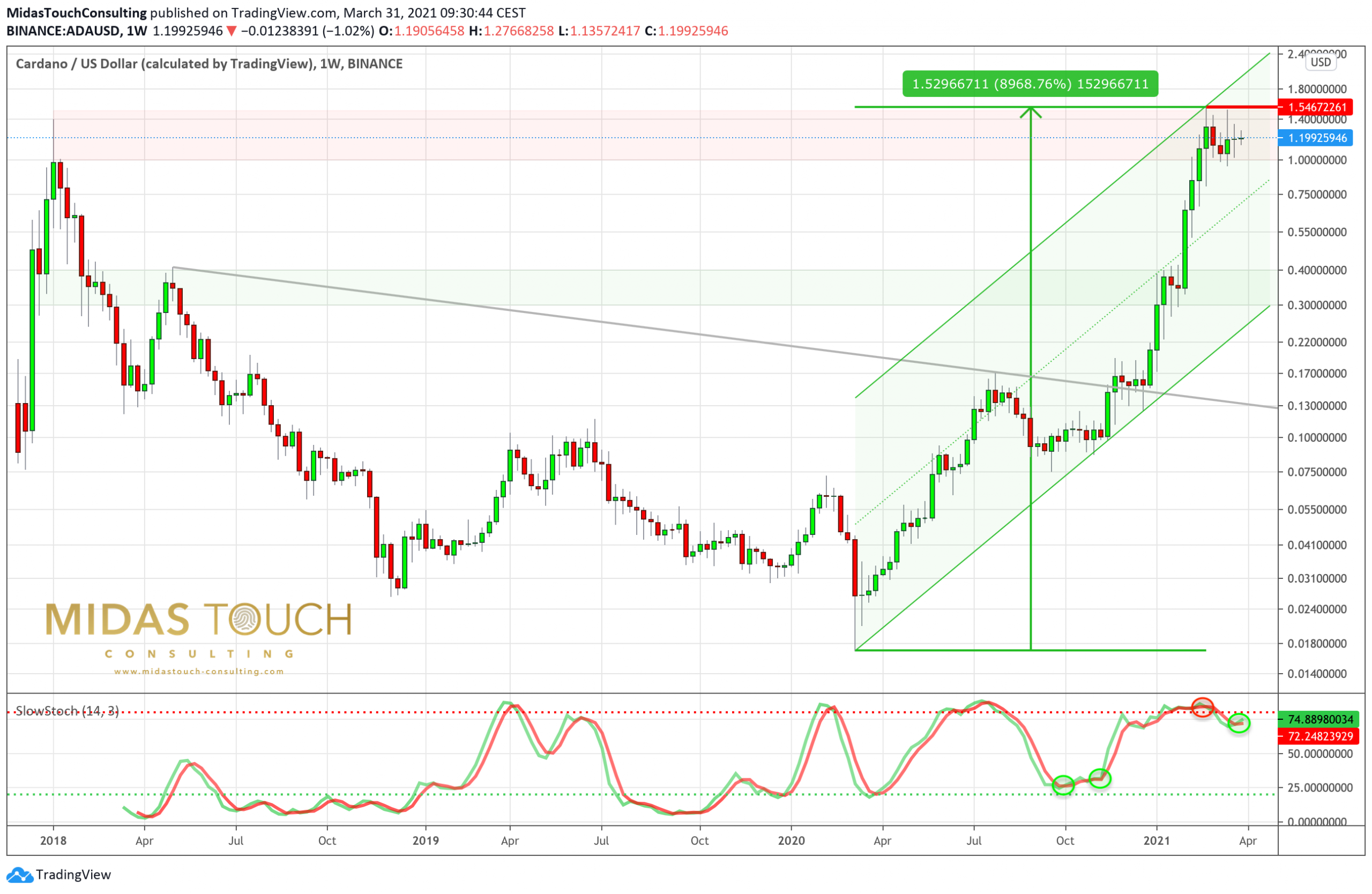 The weekly chart reflects the last 3 years sine Cardano started trading. While initially benefiting from the final stage of the crypto bull run in 2017, a deep and bitter bear market followed. From its top at around US$1.40 in early January 2018, Cardano lost 99% in the following 26 months. However, since March 2020 the bulls are back in control. Rather quickly, they managed to push prices to a new all-time high at US$1.54.

Like so many other alt-coins, Cardano has been a crazy roller coaster too. However, anybody who started buying into Cardano when we first mentioned it in summer 2018 at prices below US$0.20 has done well overall. 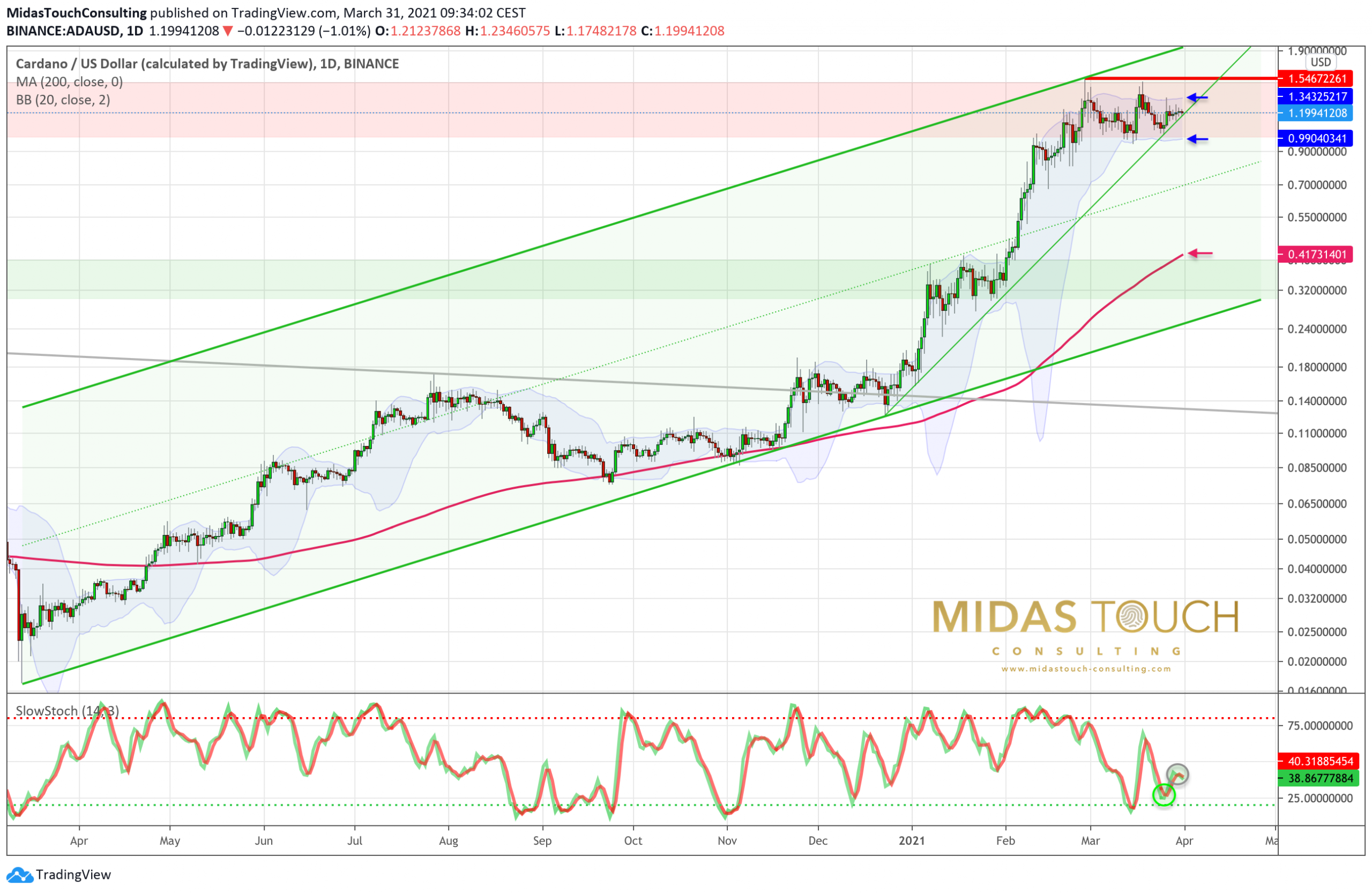 On the daily time-frame ADA remains bullish, closing higher highs and higher lows. The daily stochastic has cooled off significantly, while Cardano has been consolidating sideways since earl march. The Bollinger bands are running parallel preparing for a possible squeeze at some point in the not too distant future. The distance to the quickly rising 200-MA (US$0.41)  is still huge. Hence, in case that the support around US$0.95 to US$1.00 should not hold, a quick drop towards around US$0.70 might happen easily. 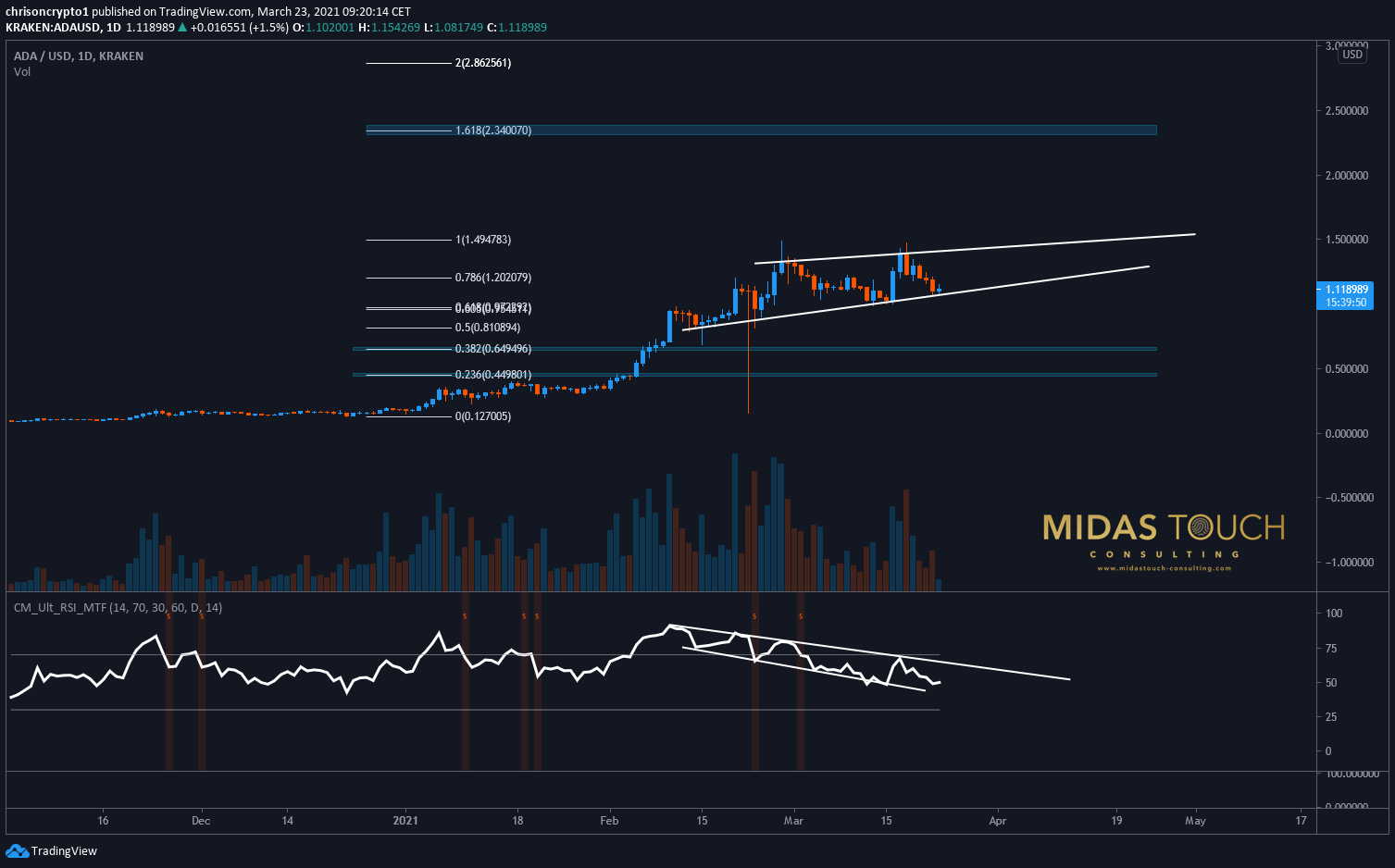 The daily-RSI has cooled off significantly and rests at the 50 level as both bullish and bearish Relative Strength Index (RSI) divergences struggle for direction. A standard bearish divergence carries more weight than a hidden bullish divergence. As such, ADA appears to be trading within a rising wedge with daily bearish RSI divergences.

Despite these warning signs, Cardano is still bullish and rising wedges have a habit of breaking higher in bull markets. Short of intra-day scalps within the structure, the only areas of interest would be a play on strength above US$1.5 to the 1.618 fib level $(2.37) or lower fib levels denoted in the chart.

Cardano, What’s next for the platform?

In light of the fact that the top ten coins are constantly playing musical chairs (except for Bitcoin and Ethereum), buy/sell orders should take into consideration probable Darth Maul candles. Those are all the more likely on less liquid exchanges until liquidity conditions for the alt-coins improve further.

Similar to other off-chain layer 2 solutions (like Binance Chain), Cardano’s success is in part predicated on Ethereum’s inability to scale. Assuming a successful EIP-1559 launch, this problem is about to be solved. This could mean that Cardano will have to create a better incentive structure for developers to use it over Ethereum.

Taking into consideration the network effects Ethereum has over its competitors and the institutional inflows hitting the number two cryptocurrency, it’s likely that Cardano’s Charles Hoskinson will need to work on achieving a new shine in the coming months.

We post real time entries and exits for Bitcoin and crypto-assets in our free Telegram channel.