Polkadot macro structure suggests a probable reversal is ahead

Before we get started, let it be known that decentralized finance or DeFi is a fledgling sub-sector in the crypto-verse which is still highly contentious in the cryptocurrency space, in part due to pervasive systemic risks within the Ethereum ecosystem. This is to say that it remains to be seen whether most of these DeFi projects will continue to exist a year from today. Polkadot macro structure suggests a probable reversal is ahead.

Given that investors are attempting to make educated decisions with incomplete information, the importance of doing your own research cannot be understated for any DeFi project. Typical red flags include highly centralised liquidity pools, a substantial pre-mine and no real use-case that’s applicable to the financial world DeFi is attempting to replace.

Polkadot (DOT), however, appears to be a project which might emerge as a mainstream contender for this decentralised financial future. Needless to say, bitcoin is the undisputed blue-chip cryptocurrency, but fresh attempts and innovations will march on nonetheless!

Polkadot is an open-source project founded by the Web3 Foundation, a Swiss Foundation founded to facilitate a fully functional and user-friendly decentralized web. Polkadot is a sharded protocol that enables blockchain networks to operate together. The DOT token serves three distinct purposes: governance over the network, staking, and bonding.

Polkadot aims to enable a completely decentralized web where users are in control. Polkadot is built to connect private and consortium chains, public, and permissionless networks, oracles, and future technologies. Polkadot aims to facilitate an internet where independent blockchains can exchange information and transactions in a trustless way via the Polkadot relay chain. Polkadot aims to make it easier than ever to create and connect decentralized applications, services, and institutions.

Is Polkadot the “cross-chain solution”?

Having said that, narratives are incredibly powerful in the crypto-space and should not be taken for granted. Polkadot seems to have positioned itself as the “cross-chain solution” that will allow interoperability between blockchains. Stakeholders of DOT tokens will have a say in the direction and development of the network. Put together, this present an opportunity for the network to be the go-to mechanism for DeFi once platforms like Tron, Cardano and Neo take the ‘DeFi’ route – which is only a matter of time.

Having witnessed the success and subsequent disappointment of Ethereum to cater for demand via its network, less popular blockchains will probably pursue the same route, further enabling Polkadot’s niche use-case. Of course, this may or may not happen, but the narrative is certainly compelling.

In any case, let’s dig into the technicals.

Seen purely from a price-action perspective, DOT selling pressure appears to be waning on the daily time-frame, with each leg down decreasing in strength. Each downwards thrust saw a 48.44%, 30%, 21.94% and 14.7% correction, respectively – which speaks to decreasing sell-side pressure. 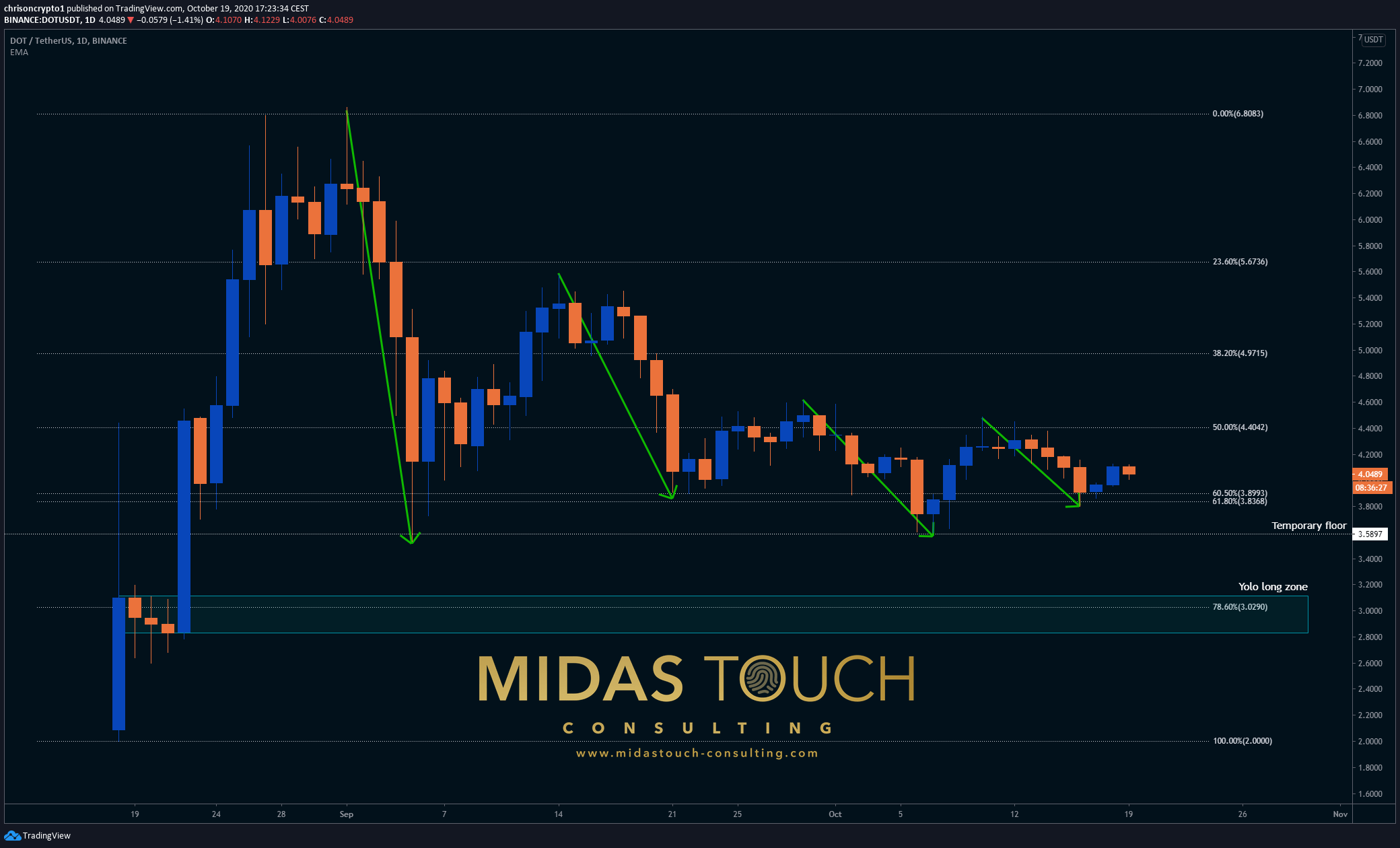 Interestingly enough, a floor appears to have been established around the .618 fib retracement level, which is a typical retracement area often used to contextualise price-action.

As such, this presents the prospect of a mid-term reversal assuming an unlikely scenario wherein the number 8 top project on Coingecko with a US$3.7 billion market and a strong narrative doesn’t trend towards zero.

These ‘buy-zones’ which coincide with a major macro reversal in the coming weeks, namely the golden pocket area, the temporary floor and the aptly named ‘yolo long zone’. Per the chart, the ideal entry would be at the temporary floor zone, as this provides a perfect risk-adjusted setup with a stop-loss just under US$3.45. Unfortunately, the market seldom does what you want it to.

Should the temporary floor give way, then this entire thesis would be suspect, hence the .786 fib ‘yolo long zone’ which is more or less a knife-catching attempt. Crypto market ninjas will undoubtedly rise to this challenge should the opportunity arise.

Bitcoin dominance to dictate the next altcoin season?

In order to correctly time DOT’s probable bounce, the bitcoin dominance chart might help to give a few signals. 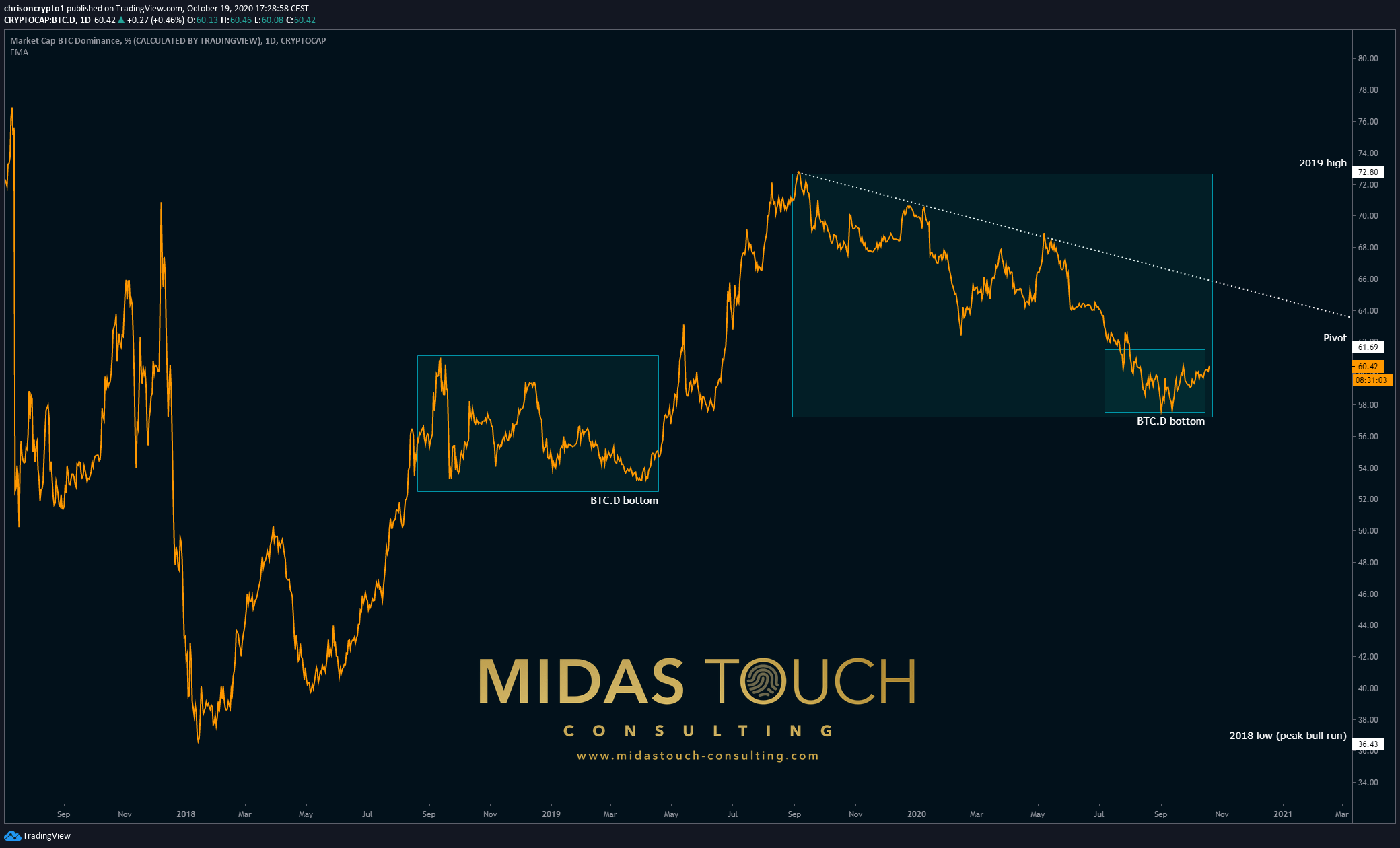 Typically, when Bitcoin loses dominance the entire crypto market surges. This happened in prior cycles and mini-cycles. As such, there’s little reason to expect altcoins to reliably outperform bitcoin until after bitcoin has sufficiently pumped. Increasing bitcoin dominance (along with the price) is typical for a macro bull cycle (per the 2017 run). This could result in less alpha relative to bitcoin or a bleed-out effect and DOT is no outlier in this regard.

However, as bitcoin approaches all-time highs the prospect for major alpha across various altcoins increases as investors diversify additional capital into various projects.

As such, keeping an eye on bitcoin dominance, specifically the 61% pivot level and the downwards-sloping trendline is useful to adjust appropriate capital allocation to various altcoins with a reasonable chance of success.

Let the games begin. Polkadot macro structure suggests a probable reversal is ahead!

Author Credit: Christopher Attard, journalism and content specialist who covers bitcoin and crypto markets.  Get in touch at contact@chrisoncrypto.com and https://chrisoncrypto.com for more info.

We post real time entries and exits for Bitcoin and crypto-assets in our free Telegram channel.