Over the last three weeks all hell broke loose in worldwide financial markets sending basically all asset classes into a dramatic crash. While Gold reached a new all-time high just a week ago it now trades significantly lower. Has the Corona Virus Panic pinned the “everything bubble”? And what are the consequences? Gold – Merciless sell-off in the paper gold market expected

After a multi-months rally, which has been pushing prices upwards since the beginning of the year despite increasingly wild price swings, the gold price reached a new 7-year high at US$1,703 on Monday, March 6th. This upward movement started 17 months ago in August 2018 at a low of US$1,160. Since then, gold and GLD have increased by almost 47%.

With the dramatic crash in the oil market, completely collapsing financial markets and the widespread corona panic, the originally expected grand finale with prices around US$1,800 this spring is off the table. The liquidity crunch which has only just started has already forced precious metals significantly lower. Gold closed this historic and brutal trading week at US$1,529, nearly US$200 below Monday’s high. Silver and especially palladium have seen a nasty sell off too. The mining stocks (GDX and GDXJ) were also completely butchered along with the overall market. Bitcoin has now lost over 50%.

Hyper-realistically it looks like the corona virus has pinned the so-called “everything bubble”. Accordingly, the biggest stock market crash of all time is not over yet but has only just begun. In a first reaction, central bankers and politicians have already thrown massive support, liquidity measurements and emergency programs at this escalating situation. So far, however, they have completely evaporated in panicking worldwide financial markets. One wonders why the stock markets and exchanges were not closed two weeks ago already. 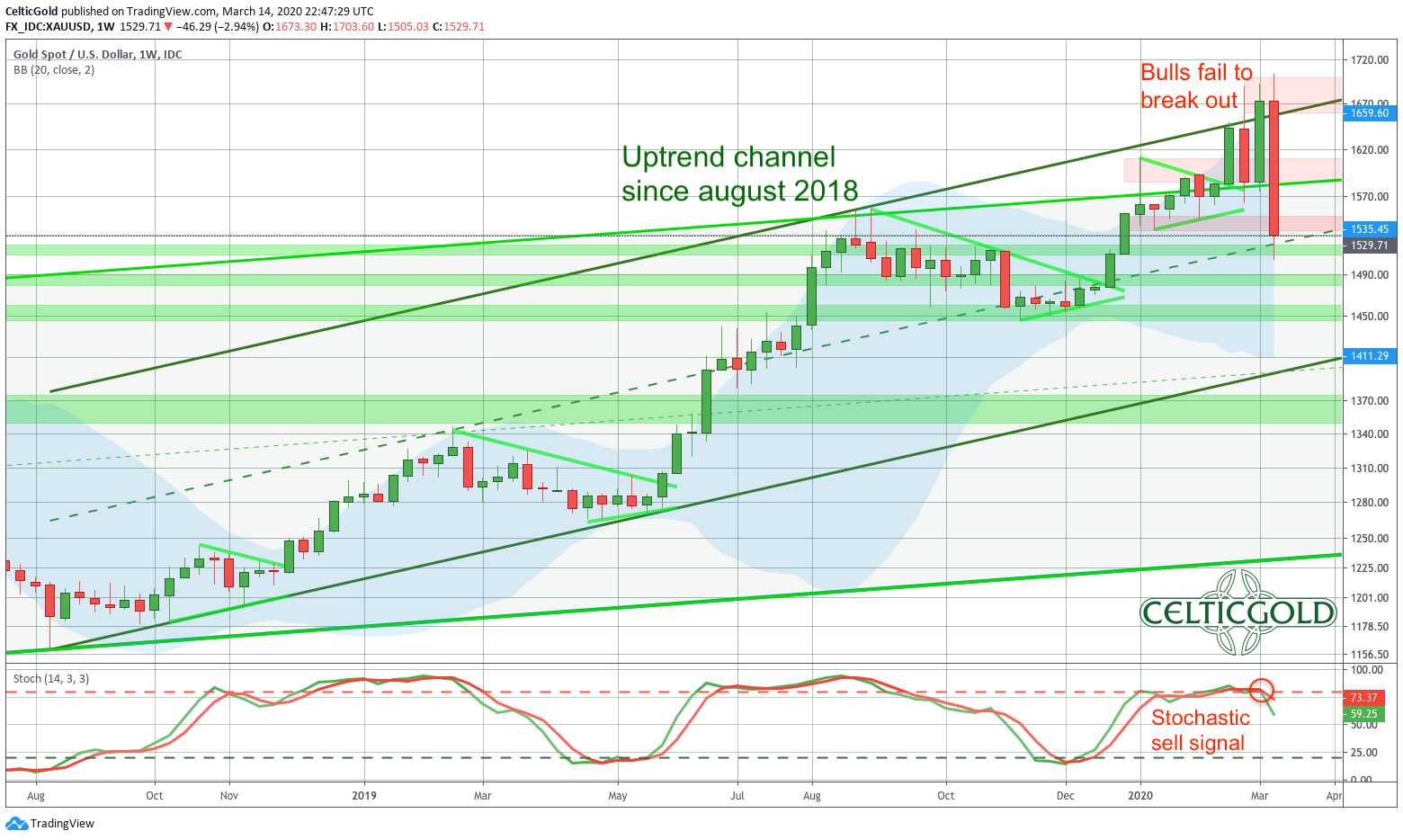 On the weekly chart, gold clearly failed to break out above its uptrend channel formed since August 2018. The bulls have tried it for three weeks at these lofty heights, but the collapsing financial markets have now definitely ended the gold rally. The result in the past few days has been a sharp pullback to the middle trend line of this uptrend channel.

Given the fresh sell signal from the slow stochastic oscillator and the dramatic overall situation, we have to assume a more or less direct crash towards the lower edge of the uptrend channel in the range of US$1,400. The lower Bollinger Band already offers room down to US$1,411.

A test of the old resistance zone between US$1,350 and US$1,375 is also very likely and would be technically speaking a typical phenomenon. However, this is probably the minimum target for the downward spiral that has just started. A merciless sell-off down to and below US$1,000 cannot be ruled out in this liquidity crunch. The cause is the paper gold market, which will now be completely cleaned up. A lot of paper speculators who bought gold on margin or in the form of ETFs will now, in panic, throw their stocks onto the market or will be forced to do so by their broker.

The weekly chart has turned ultra-bearish and already needs a lot of correction after this 17-month rally. Couple this with the global crash in everything. This combination can push the paper-gold price below US$1,000 in the coming weeks and months. 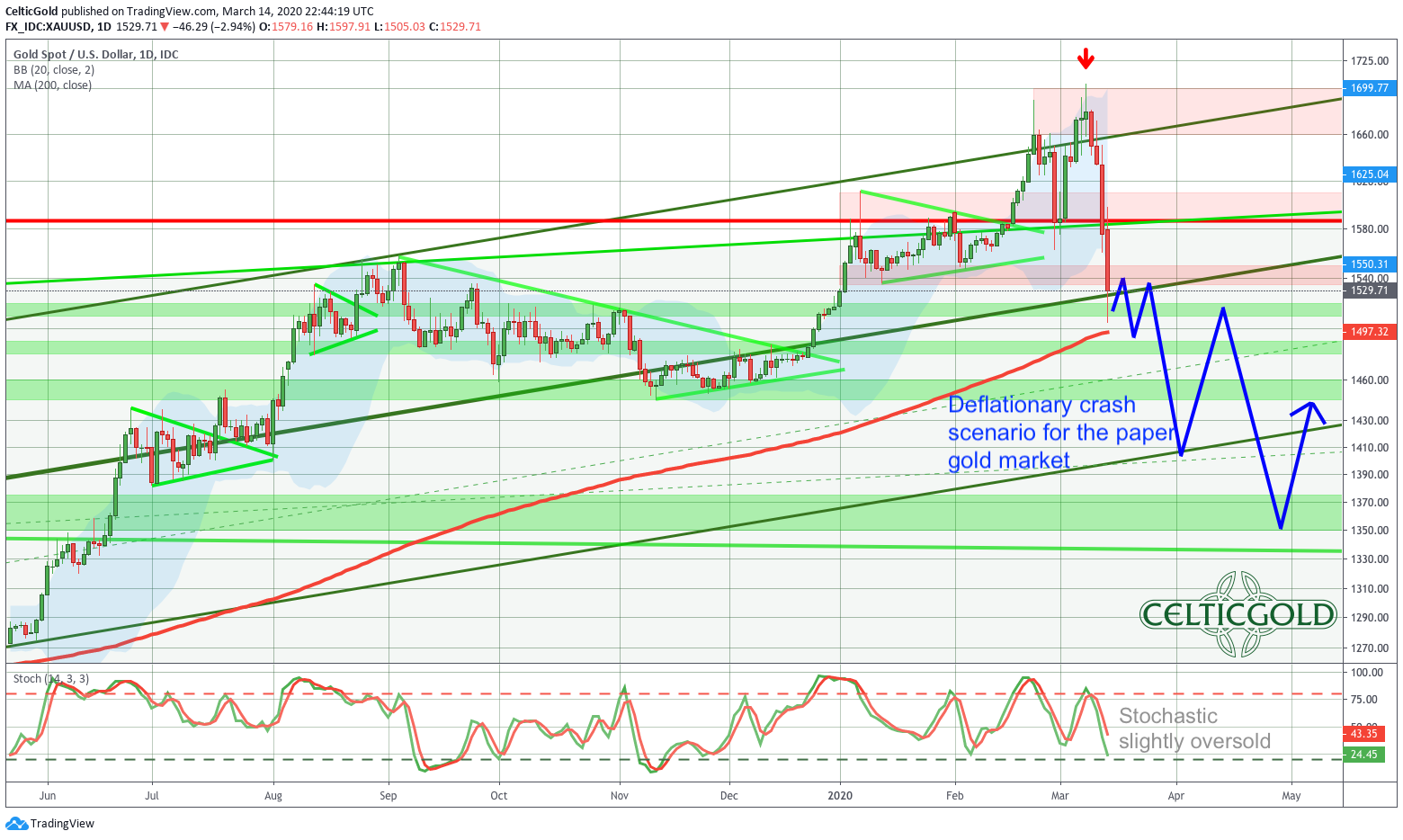 The failure of the gold bulls becomes even clearer on the daily chart. The bears have now taken control, while most market participants are still puzzled. On Friday afternoon, the 200-day moving average (US$1,497) has almost being reached. At least a temporary stabilization is possible here, maybe even a small recovery. However, the gold price will probably not move back above the September high at US$1,557.

In summary, the daily chart is slightly oversold, but still very bearish. The fact that gold has dropped like a stone in the last four trading days does not bode well. The trend change is obvious, and we can expect prices to fall back towards the lower uptrend line between US$1,390 US$1,410 shortly. Prices below the trend channel around ​​the former resistance zone at US$1,350 are very likely, too. From there, a sharp bounce should be expected. However, once a bounce from totally oversold levels gas run its course even lower prices will become likely. 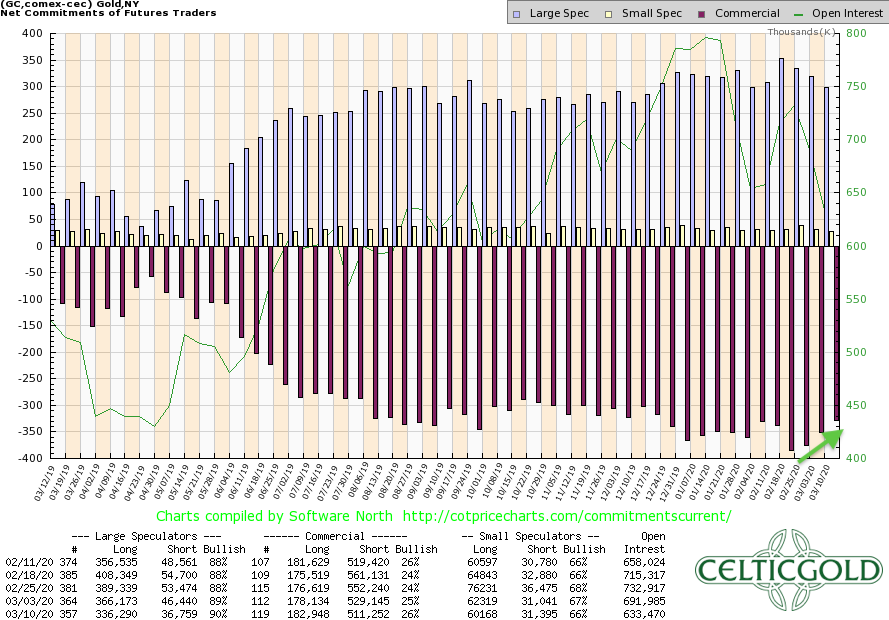 Commitment of Traders for Gold as of March 10th, 2020. Source: CoT Price Charts

The situation in the futures market (paper gold) has been extremely overstretched and completely unhealthy since last summer already. The gold price correction between September and December did not improve this setup at all. Instead, the commercial short position rose to new record levels in February.

The liquidity crunch, which is now starting, including panicky high trading volume, is playing dramatically into the hands of the gigantic, but completely under-watered, commercial short position. Now the time of the professionals has finally come. Now they can cover all their short bets and hedges step by step into the falling prices. In order for the futures market to be completely cleaned up again, at least prices around US$1,350 are necessary. 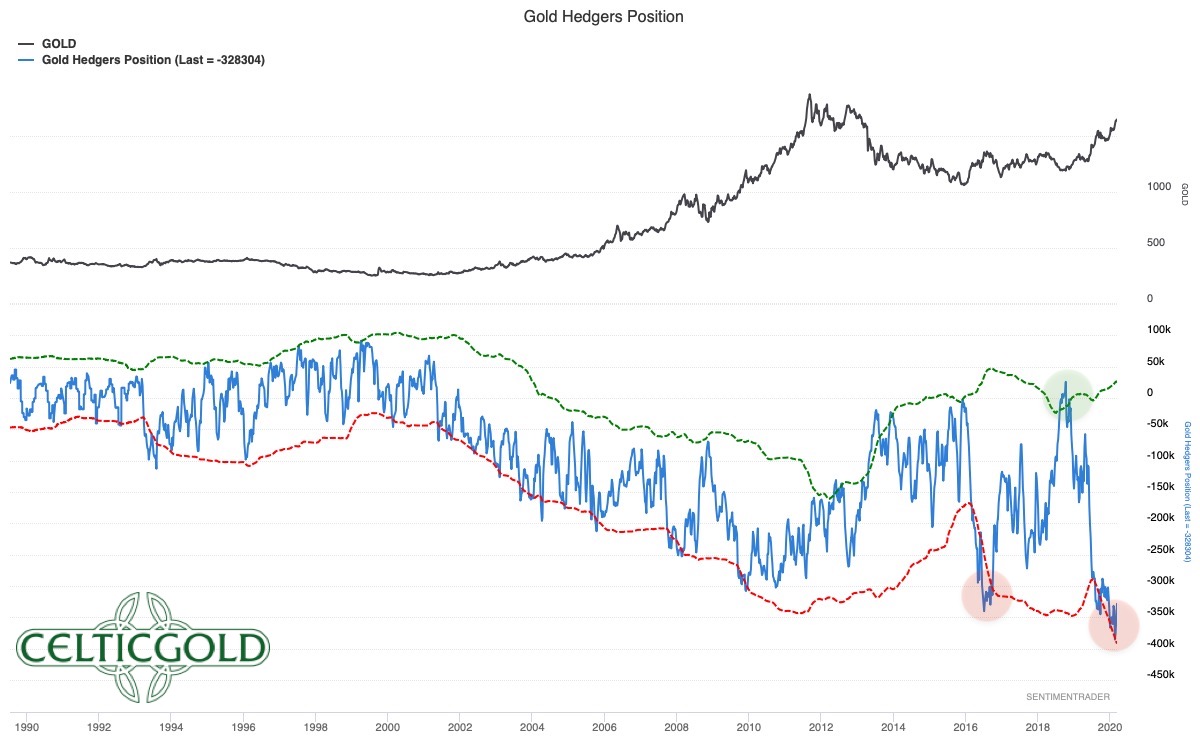 Commitment of Traders for Gold as of March 10th, 2020. Source: Sentimentrader

In summary, the CoT report continues to provide a clear and very strong sell signal. We have to assume that the merciless cleanup in the futures market has started this week. The current Cot report suggests at least prices around US$1,350. It would also be conceivable that the next contrarian bottleneck will only appear at significantly lower prices around and below US$1,000. The carnage in the paper gold futures market has only just begun. 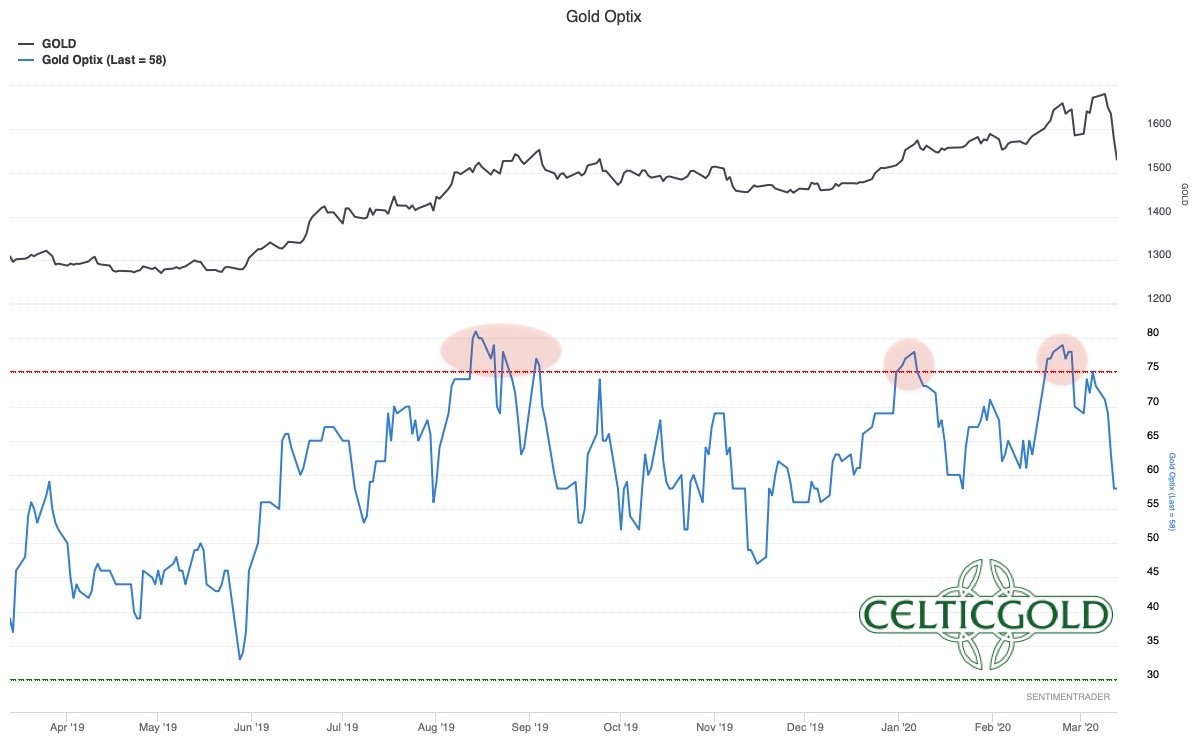 Sentiment Optix for Gold as of March 13th, 2020. Source: Sentimentrader

The Gold Optix has a lot of room to the downside and provides a clear indication that there are currently no contrarian opportunities. 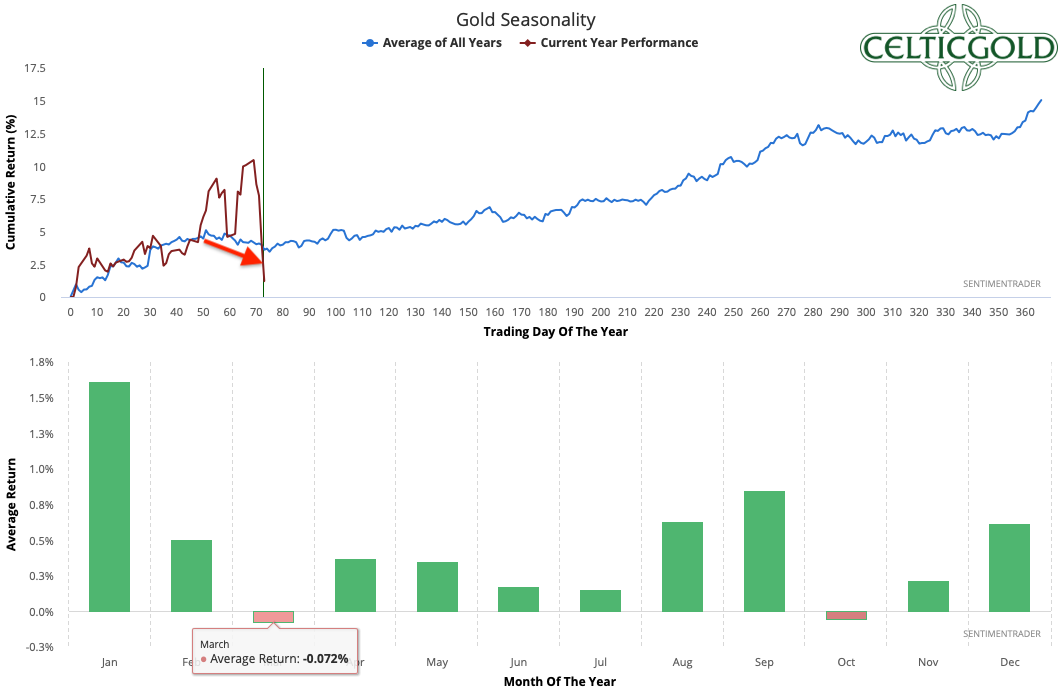 Seasonality for Gold as of March 13th, 2020. Source: Sentimentrader

After a long rally, the gold price actually seems to have reached an important high in March once again. Something similar was seen in March 2008, for example. Basically, the seasonal component now turns negative until May and June. Although there can always be strong bounces in between, the gold price usually finds a sustainable bottom in early summer.

Seasonality will no longer support the precious metals in the coming months and statistically provides a clear sell signal. 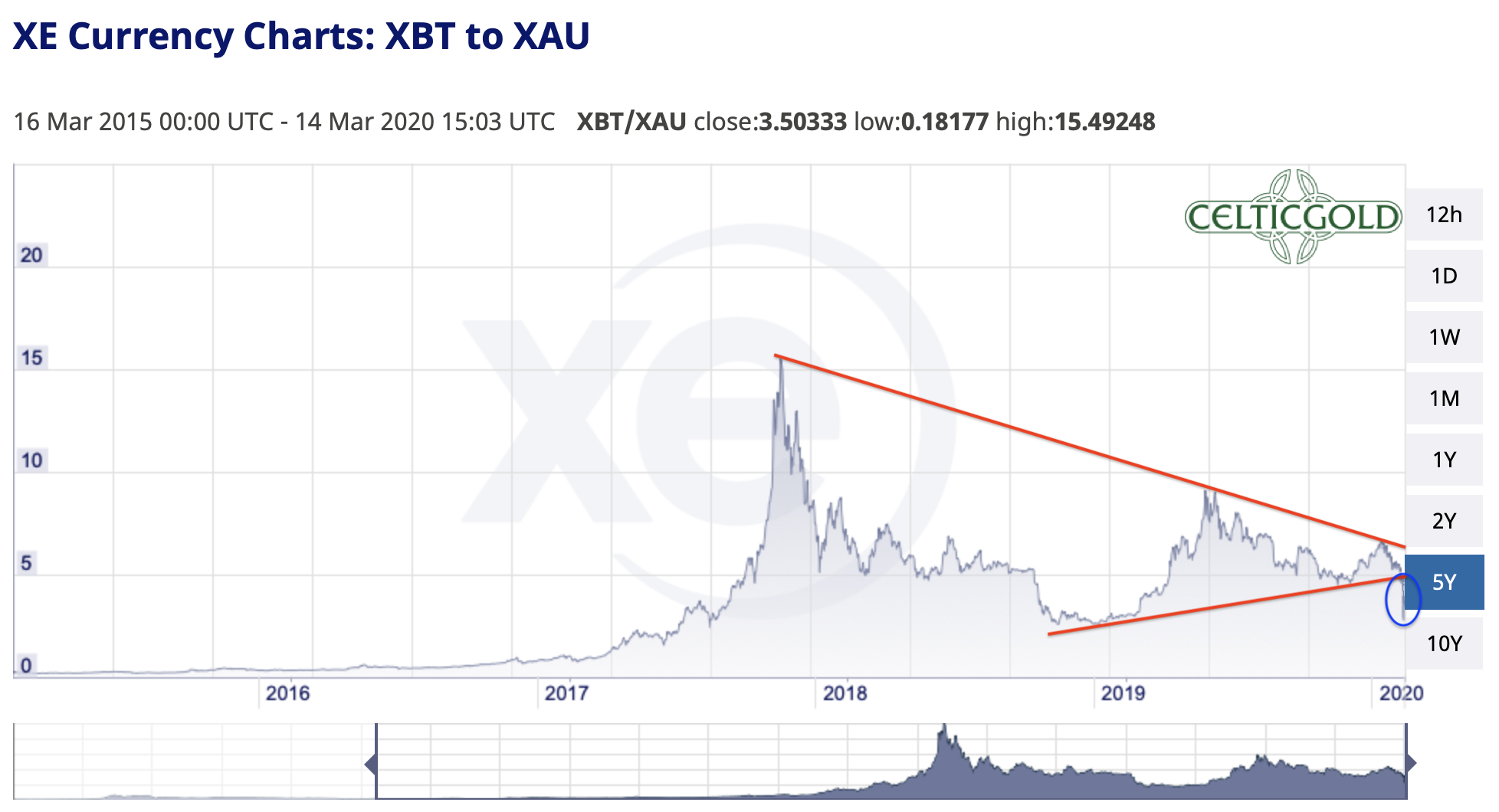 Currently you have to pay around 3.5 ounces of gold for one bitcoin. In other words, one troy ounce of gold currently costs almost 0.28 Bitcoin. Back in February it looked like the the Bitcoin/Gold-Ratio could breakout in favor of bitcoin, the picture has now changed dramatically! The ratio has broken out of the two-and-a-half-year old triangle in favor of gold. Theoretically and realistically, the dissolved formation now points to a Bitcoin/Gold-Ratio of 1: 1. Accordingly, Bitcoin would have a much greater need for correction and could meet with the paper gold prices in the range between approx. US$900 and US$1,350 in the next few months!

Generally, buying and selling Bitcoin against gold only makes sense to the extent that one balances the allocation in the two asset classes! At least 10% and a maximum of 25% of one’s total assets should be invested in precious metals physically, while in cryptos and especially in Bitcoin one should hold at least 1% and a maximum of 5%. If you are very familiar with cryptocurrencies and Bitcoin, you can individually allocate higher percentages to Bitcoin. For the average investor, who is normally also invested in equities and real estate, 5% in the highly speculative and highly volatile Bitcoin is already a lot!

In the current exceptional situation, however, the following applies: cash is king. The bursting of the “everything bubble” has probably only just begun. Both gold and Bitcoin in particular will become significantly cheaper in the next few weeks. Whether or not you can still buy physical precious metals is currently not foreseeable. In any case, a significant increase in premiums on physical precious metals should be expected and is already happening.

We are going through a historically unique situation these days. The whole world comes to a standstill due to the corona pandemic. After an 11-year bull market, which was only driven by cheap credit and tremendous monetary expansion, and almost 50 years after the gold standard was dissolved, the “everything bubble” has burst.

Ludwig von Mises clearly and unambiguously named the result of the paper money experiment many decades ago: “There is no means of avoiding the final collapse of a boom brought about by credit expansion. The alternative is only whether the crisis should come sooner as the result of voluntary abandonment of further credit expansion, or later as a final and total catastrophe of the currency system involved.” (Ludwig von Mises)

For gold and silver prices trading in the paper markets, this initially means a bottomless journey. Just like in the stock market, market participants will also have to close their positions in commodities, mining stocks and cryptocurrencies in order to obtain the urgently needed cash. Cash is king. This terrible domino effect has only just begun. Only when the global standstill slowly dissolves again and central banks in the meantime have pumped many more trillions into the markets, the paper prices of gold and silver will probably be the first to find the bottom. By this time, the physical gold market and the paper gold market will have completely separated. While paper gold will be liquidated mercilessly, precious metal shops can no longer satisfy the physical demand.

History doesn’t repeat itself but it rhymes

The only usable blueprint is the deflation summer of 2008, when the gold price fell from US$990 to US$680 within three months. When market participants slowly realized at the beginning of November that the central banks were massively opening the cash gates, the gold price was the first to find its bottom. While the German DAX and the other stock indices did not reach the final low until the following February/March, gold had already recovered back to US$1,000.

Therefore, don’t give away one single physical ounce of silver or gold. This is your life insurance from now on. Instead, save yourself and move away from your paper assets to the sidelines. At the end of this crash, there will be incredible bargains in all sectors. Any recovery in the stock-market,  in commodities and in the crypto markets must be used to sell. Even if it’s bitter. If you are lucky, you will be able to get precious metals much cheaper in the coming weeks. But I wouldn’t bet on that, because physical gold and silver have already become scarce in no time. The disrupted logistics chains and foreseeable mine closures will also cause a supply shock.

Let’s hope for the best and prepare for the worst.