Today, we would like to present an ICO that we have been following for a long time. In January of this year, we had the chance to meet the founders of TV-TWO for the first time at the North American Bitcoin Conference in Miami. We really enjoyed their energy and the persuading token use case and its economics.

TV-TWO builds a blockchain-based ecosystem for video entertainment on televisions. Machine learning and computer vision technology curate a personalized video stream, offering a lean-back atmosphere and a joyful opportunity for finding content you love. TV-TWO´s blockchain technology is used to make the watch time, number of views and user engagement transparent. Instead of communicating with the servers of TV-TWO, the Smart TV application directly connects to a Smart Contract on the Ethereum blockchain, documenting KPIs in an immutable and auditable form. The TTV token is the means of payment to purchase advertisement spots inside the TV-TWO video stream. The TTV is handed on from the advertiser directly to the consumer as a reward for their attention and data.

Over the last months, TV-TWO has demonstrated significant progress in terms of community growth, hiring, product development, business partnerships and funding. And after intense research and observation, we personally participated in their ICO and decided to present the project to you.

Fortunately, we were able to negotiate a special offer for our community which will give you an extra 2.5% on top of your investment.

TV-TWO is the platform to start your night in front of the TV and discover exciting content with friends and family. Machine learning and computer vision technology curate a personalized video stream, offering a lean-back atmosphere and a joyful opportunity for finding content you love. Through business partnerships with 20th Century Fox and the RTL Group, a variety of short videos, like movie trailers and TV show highlights, are displayed inside the stream of the Samsung and LG Smart TV app. Sponsored messages are relevant and smoothly blended into the stream. As an example, Germany’s leading supermarket chain REWE produces a cooking show that is promoted among food lovers on TV-TWO. Brands that decide to engage with their target audience on TV-TWO must purchase the Token for Television (TTV), the only allowed means of payment. The utility token is handed on directly to the viewers of the advertising as reward for the shared data and attention. TV-TWO has confirmed listings with Bancor and IDEX. Additionally, the campaign planning tool of TV-TWO will be directly linked to the upcoming trade.io exchange, making it possible for advertisers to buy tokens for a campaign from ICO participants with a single click. 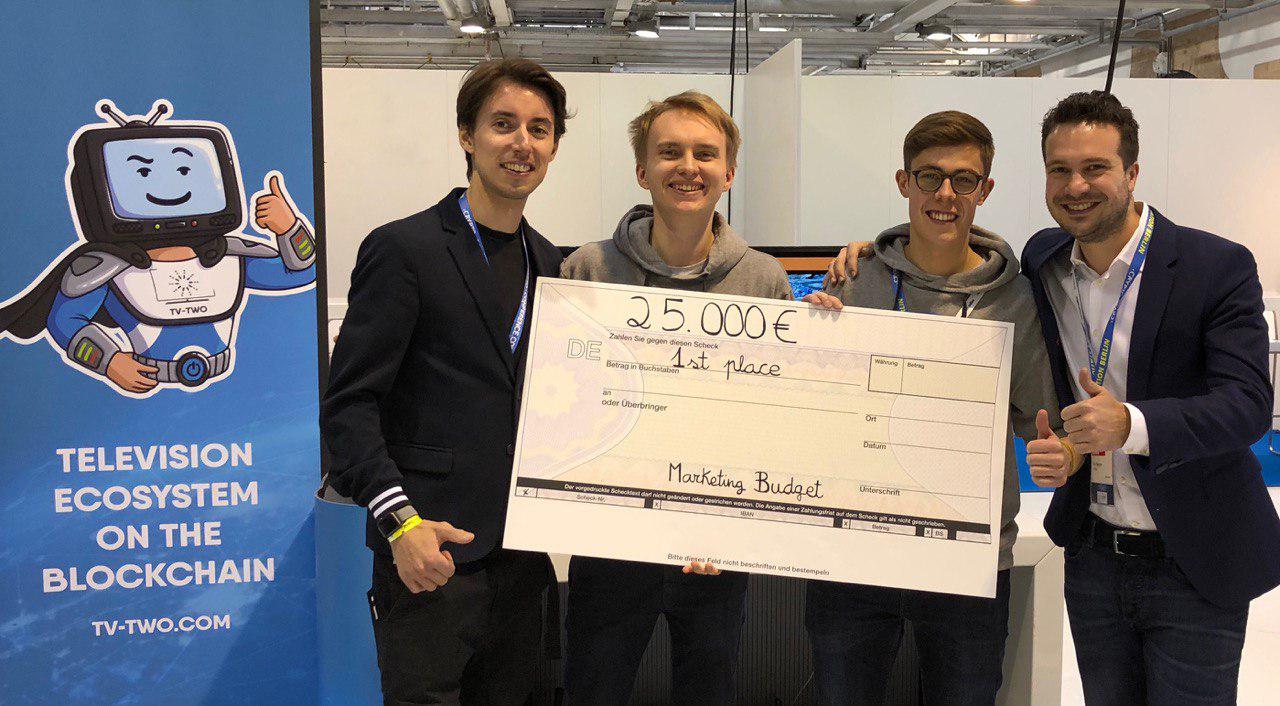 Blockchain technology is used to make the watch time, number of views and user engagement transparent. Instead of communicating with the servers of TV-TWO, the Smart TV application directly connects to a Smart Contract on the Ethereum blockchain, documenting KPIs in an immutable and auditable form in the distributed ledger. This brings transparency to the ad spend of brands and takes out middlemen such as TV networks, Facebook and YouTube that are selling consumer access to the highest bidder. TV-TWO’s decentralized nature fundamentally differentiates the open platform of TV-TWO from the established walled gardens in advertising. It brings fairness and transparency to the TV market. The limited scalability of the Ethereum blockchain is overcome by implementing µRaiden state channels that minimize transaction costs, while allowing for transparent documentation of watch statistics. Through the built-in cryptography, the advertiser can decide to make the immutable watch statistics accessible to anyone, just partners or only themselves. 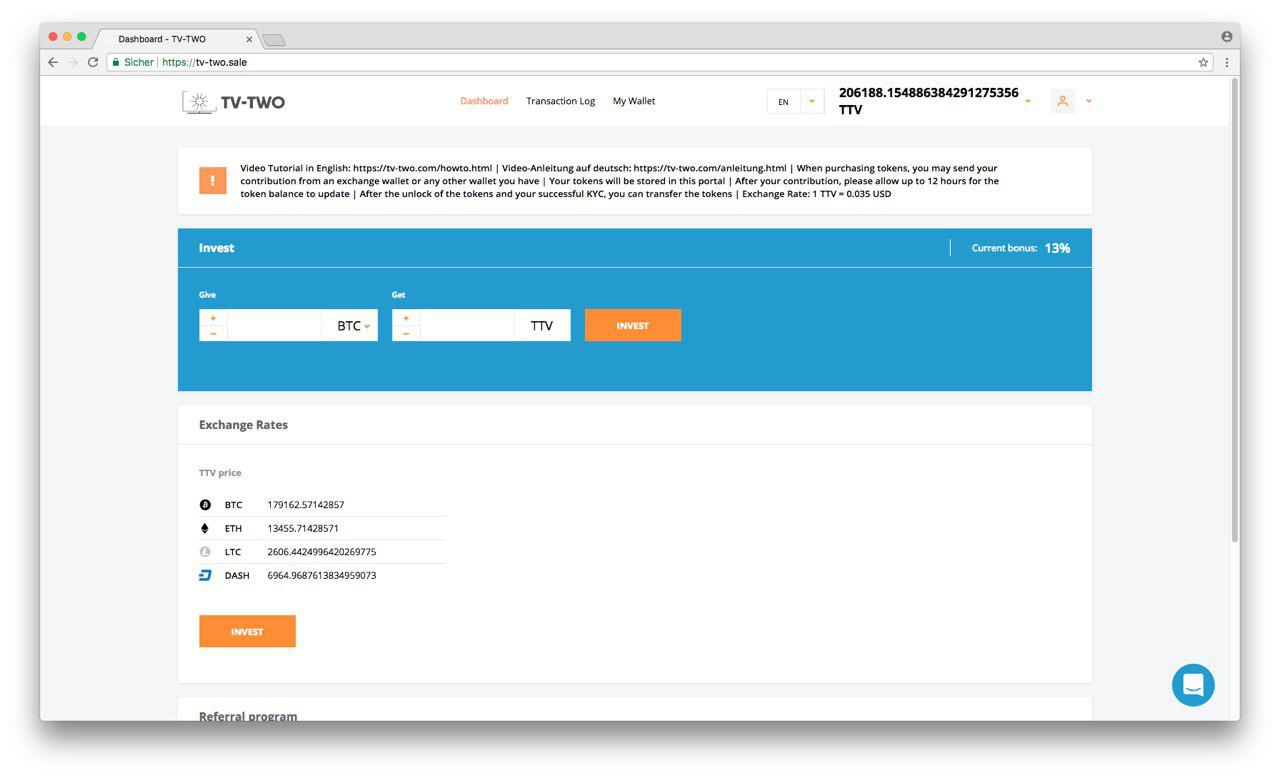 The German team shows an appealing combination of young entrepreneurial drive and industry experience. Prior to launching TV-TWO, the founders led the mobile advertising start-up Minodes out of Berlin and sold the company in a 10M+ EUR exit to Telefónica. The advisory board is comprised of industry experts like Markus Schneider, CFO of 20th Century Fox of Germany and crypto veterans like David Ben Kay, known from the Board of Directors of the Ethereum Foundation. When looking at the TV market, its digital potential is largely untapped by TV networks. At the same time, television is still the leading marketing channel with ad spends of USD $180 billion annually. It definitely is an opportunity worth exploring and given the lack of transparency, the industry it is tailor-made for blockchain technology.

Since the number of TTV is fixed after the crowdsale, each issued token possesses the right to show sponsored messaged to a defined percentage of consumers that watch television through TV-TWO. If the absolute number of consumers using TV-TWO grows over time, the utility of each token increases. Thus, a sound business model that tokenizes an existing, potent industry, leading to a steady token demand uncorrelated to the volatile crypto markets. The TV-TWO ICO has already collected funds worth USD $7.5M. Currently, the ICO offers a bonus of 9%, which decrease every three days. Through our direct contact to the founders, we were able to acquire an extra bonus of 2.5% for our community. The television industry is a sleeping giant and if TV-TWO manages to break through, the potential is enormous.

Disclosure/Disclaimer: I am personally invested, therefore I am biased! Please do your own due diligence..

Get social with TV-TWO