Gold – So Far A Higher Low!

From the low point at US$1,764 on November 30th, the price of gold did quickly and impressively recover as expected. With a strong start into the new year, the price for one fine ounce of gold even hit a two-month high on January 6th at US$1,959. Since that Wednesday, however, the picture turned somewhat cloudy, as the two massive sell-offs on January 6th and 8th created a deep pullback followed by a tenacious consolidation around the 200-day moving average (US$1,849). Gold did not go anywhere for a few weeks, yet constantly shocked market participants with a volatile rollercoaster. Gold – So Far A Higher Low!

Although the unprecedented currency creation out of thin air is in full swing around the world, financial markets are currently making a somewhat unstable impression. Stock markets, in particular, would be at risk. If prices slip more sharply here, the precious metals sector is likely to come under pressure too.

However and for now, I expect gold to mover higher from here and consider the recent shaky consolidation above US$1,800 as healthy and overall a normal consolidation. The first wave from the November lows was rather fast. Now standing on two feet (US$1,765 and US$1,800), the picture looks more stable. And such a second leg to stand on has been typical in the process of coming out of previous multi-months gold price corrections. However, the bulls should not hide for too long anymore. Otherwise the threat of a resumption of the correction that started in August 2021 is gaining strength. Today’s price action initially improved the bullish outlook but the sell-off backend the weekly close at US$1,845 raises actually more questions. 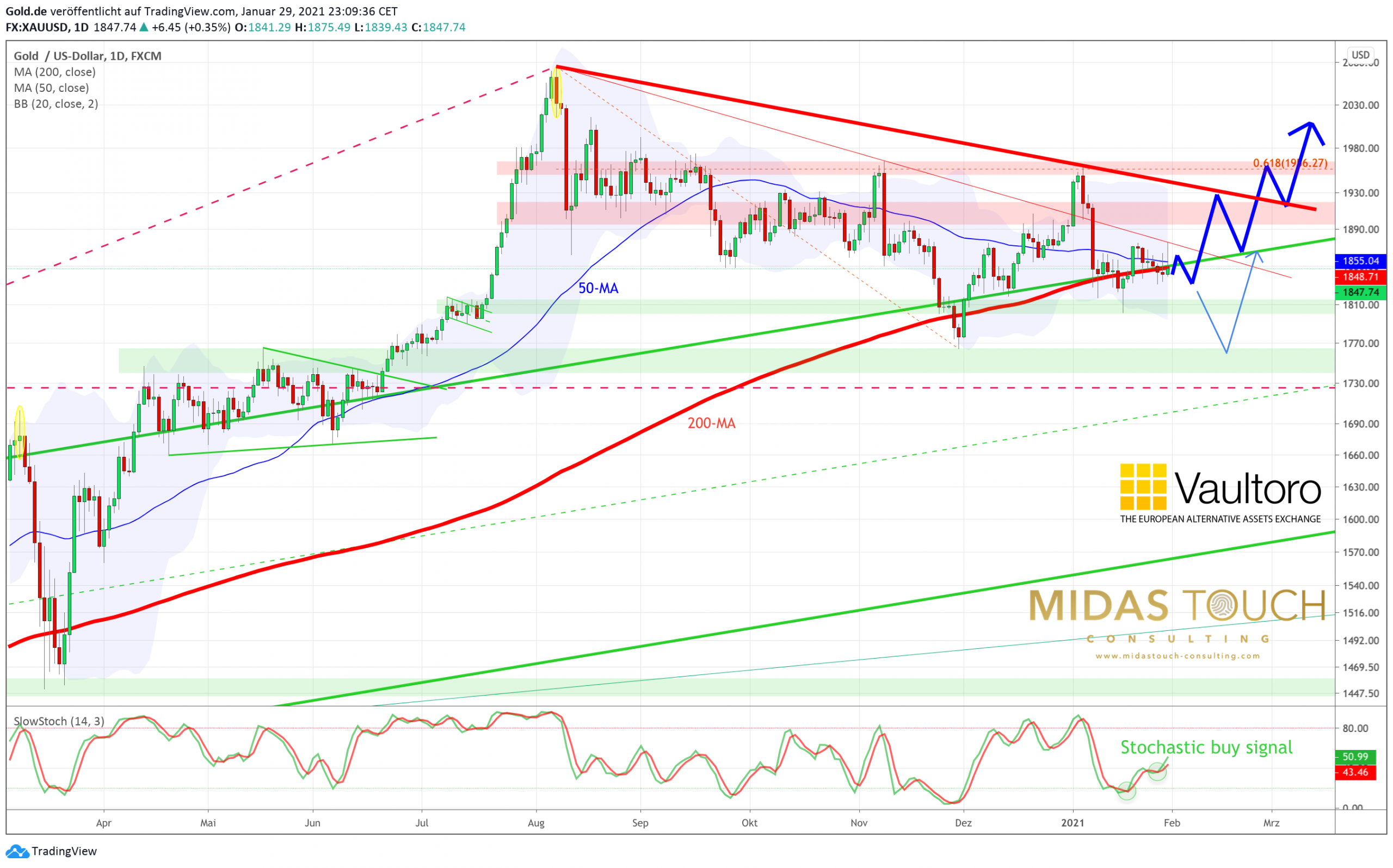 Initially, the price of gold did recover even faster than expected since our last analysis. On January 6th, at a peak of US$1,959, the November high at US$1,965 was all nearly reached again. In view of this resistance, coupled with the short-term overbought situation, a temporary reaction or correction was quite likely in early January. However, the bears suddenly attacked quite vigorously. In just four trading days, they pushed gold prices down from US$1,959 to US$1,802.

Over the last three weeks, the bulls had a hard time to recover from this shock. After a temporary bounce to US$1,875 prices have quickly been sliding back down again. There is no doubt that the technical picture had thus deteriorated. But after all, the 200-day moving average (US$1,848) combined with the top edge of the old upward trend channel have been holding so far. With today’s rather strong price action the expected rebound towards US$1,900 has now become very likely again.

As the seasonal component remains promising until the end of February, rising prices remain the primary expectation over the coming weeks.  Only if the range support around the 200-day moving average (approximately US$ 1,830 to US$1,855) is not holding anymore, the risk for more trouble would be increasing significantly. In that case another test of the November lows around US$1,765 would almost be pre-programmed.

In the larger picture, the price of gold continues to correct and consolidate its massive two-year up-leg from US$1,160 to US$2,075. Investors’ nerves are currently being tested with a tough sideways torture as well as sudden and sharp sell-offs. However, this volatile rollercoaster should take gold back to around US$2,000 by spring. And, as physical gold and silver remain a unique insurance against the accelerating devaluation of all currencies, they are an essential part in ones wealth preservation portfolio.

Our maximum purchase limit of 1.550 Euro per ounce will remain in place until further notice and has brought numerous opportunities to add to your physical holdings in recent weeks. Currently, the price of gold in euros is trading around 13% below its new all-time high of last summer. And even though prices currently trading slightly below the 200-day line (1.586 Euro), we can currently speak of rather a favorable risk/reward-ratio for longer-term gold investments.